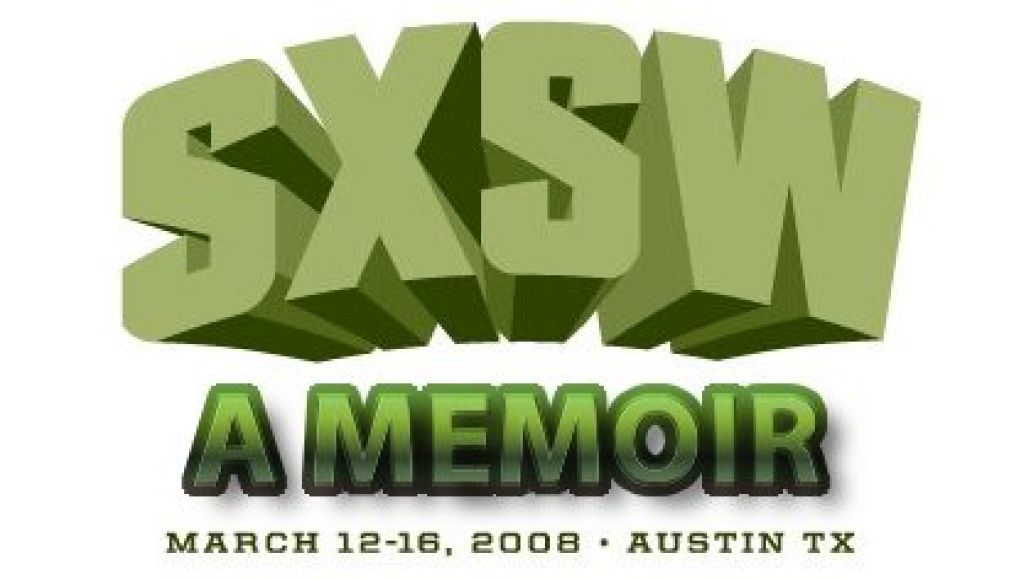 we call “A SXSW Memoir”. In the first of his entries, Matt recaps day one of his SXSW 2008, which featured a mix of national and local talents…

Let’s just start by saying this: more so than any other traditional music festival, SXSW is a grind. I kept hearing this word unconsciously escape from my lips when discussing the events of the day with other festival attendees and it’s hard to appreciate how grueling the long weekend can be without being there. Nevertheless, the payoffs are extreme for the rabid music fan. Live music blasts from what seems to be every doorway, window and street corner on Austin’s 6th Street from noon until well after midnight. Throngs of tune-seekers looking to catch the latest buzz band, getting drunk on free beer, becoming bloated on complimentary barbeque and scurrying to see their favorite acts from all around the world playing brief sets in mostly tiny to medium-sized clubs. It’s one hell of a scene and while I can’t possibly do it justice, I can at least recount my own SXSW grind.

Wednesday
We arrive from Chicago ahead of schedule, grab our bags, jump in the rental car and immediately shoot over to Waterloo Records to secure wristbands which went on sale to the general public earlier in the morning. Arriving prior to 11am, there are still wristbands available and we plunk down $165 each for the precious bracelets. This turns out to be my personal biggest mistake of the week as the overwhelming majority of the shows I end up attending are free and open to the public. Whoops. Yet on Wednesday morning, I’m feeling a sense of relief that I will more or less be able to attend just about any show I wish through Saturday night.

After checking into our cheap motel north of downtown and taking a disco nap, we head out to Mother Egan’s Irish Pub where the Guitartown/Conqueroo showcase is taking place all afternoon and well into the evening. One of the things I noticed early on was how much the performing musicians hang out before and after their sets at the various showcases around town. It’s uncommon to see artists in the areas open to the general public at the typical summer festivals and while it’s not uncommon to see them hanging out when performing at small clubs, it’s never on the scale witnessed here. The Silos’ Walter Salas-Humara is spotted walking across the street to grab a fish taco at Wahoo’s, Brent Best and Keith Killoren of The Drams smoke cigarettes just outside the club and poke fun at the cheesy cover band performing at nearby Opal Divine’s and Jon Dee Graham offers hugs to anyone who wants one following his blistering set. Which, by the way, was my personal SXSW kickoff music.

Playing with a band of talented locals backing him up (including Son Volt’s Andrew DuPlantis on bass), local Austin fixture Jon Dee Graham performed a brief set of his finer songs showcasing his John Hiatt-esque songwriting skills, his gravelly Tom Waits-like voice and Stratocaster chops not unlike those of Richard Thompson. Another local, Chip Robinson, takes the stage next and performs a solid, if mostly forgettable, set of twangy guitar rock. Blue Mountain (featuring Wilco bassist John Stirratt’s twin, Laurie, on bass) followed with a loud, powerful rock set that sounds remarkably better than their anemic street festival performance in Chicago last summer. Next up was the ‘surprise guest’ of the evening: Abigail Washburn supported by the great Bela Fleck. While I’m not a huge fan of bluegrass music, it’s impossible to ignore the fine mountain melodies conjured up by the quartet on their ban jos, mandolins, guitars and violins. The set by The Silos turns out to be a bit of a let down which was somewhat expected given the recent death of bassist Drew Glackin (to whom the show is dedicated), but unfortunately drummer Konrad Meissner is not in attendance due to previous obligations, so leader Salas-Humara is surrounded by an unfamiliar backing band. Jon Dee Graham joins in on lead guitar which helps matters somewhat and the saving grace is their always impressive rendition of The Modern Lovers’ “I’m Straight”. Patty Hurst Shifter’s performance leaves no trace in the memory at all and the evening is capped off with a strong, if workmanlike, performance by The Drams.

There’s still time left in the evening, so after enjoying a chat with Two Cow Garage’s Micah Schnabel about their recent European tour and forthcoming album, it’s off to the 6th Street area to the miniscule Friends to see the only weekend performance by Denton, TX favorites Centro-matic. Arriving early proves to be a good thing as the tiny club fills up while Timothy Bracey’s New Romance plays a mostly average set. The area between the stage and the mixing board is so cramped that audience members are recruited to help Centro-matic get their amps up on stage. Once the music begins, it’s easily the best set of the day as the band rips through a nicely balanced selection of new songs from the forthcoming album and old favorites. Most groups don’t have the inclination or opportunity to give encores at a festival dominated by the 25 minute ‘industry set’, but it’s the end of the night and when the crowd screams for more following the last son g, Will Johnson and the gang oblige with a transcendent version of The English Beat’s “Save It for Later”.

All in all, it was a good way to start off the festival and the grind has not kicked in at all. This was a rare instance where I took the tack of hanging out at one club for most of the day/evening. That would not prove to be the case on Thursday. A SXSW Memoir: Day One