Known for their fast-paced, high energy live shows, Ronnie and the Hawks gained a large following in every city they played. Rehearsing and performing for up to 10 hours a day was not unusual for these boys. Years of practice and live experience made The Hawks the tightest group of musicians during their time. In terms of musical skill they dominated anyone else in the rock and roll circuit; however, it took a few years to reach the respectability they deserved. Things started cooking when a young Robbie Robertson begun hanging around at shows in Toronto, changing the destiny of The Hawks forever.

Born July 5, 1943 in Toronto, Ontario, Canada, Robbie Robertson grew up on a Mohawk Indian reservation surrounded by music. His large family of cousins and uncles would influence his musical roots by playing mandolins, fiddles, and guitars for hours on end. By the mid 50s, Robertson was staying up to the early hours of morning listening to Nashville radio stations broadcasting rhythm and blues into his Toronto living room. The same Dixieland musicians that influenced Hawks drummer Levon Helm, who grew up in Arkansas, were being plugged into Robertson’s soul. Just across the Canadian border rock and roll music was 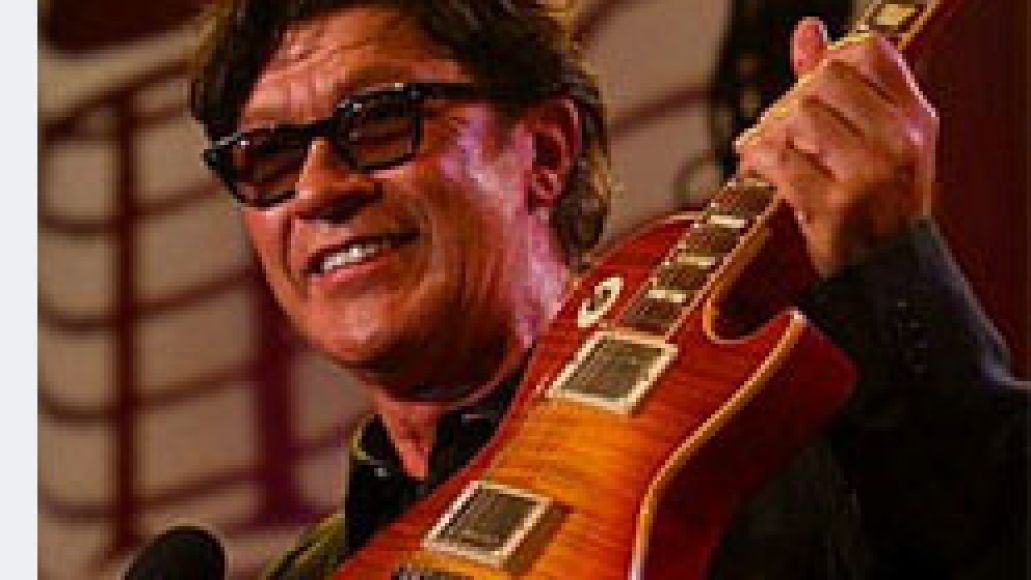 beginning to take shape throughout parts of New York, Tennessee, Louisiana and Arkansas. Little did young Robertson know that he would soon become a large part of this rock and roll movement.

At age 15, Robertson had already begun to lend a hand to Ronnie and the Hawks, specifically when they took up residence in Toronto. Helm remembers: “He’d do anything to make himself useful-haul amps, help set up, run for coffee.” The band would stay in Toronto for months, playing weekly gigs at many downtown Toronto bars, before heading south to tour parts of Tennessee, Arkansas and New York. These weekly gigs in the Great White North afforded Robertson the opportunity to become close with members of The Hawks, including Hawkins himself. Eventually Robertson’s band were able to open for the hugely popular Hawks.

Hawkins believed in Robertson, even though he was 15 years young: “‘The Hawk told anyone that this kid Robbie was going to be one of the biggest stars in the business some day.'” By the age of 16, Robertson was ripping through Hawkins’ fast paced tunes, playing bass in The Hawks. Naturally a lead guitar player, Robertson learned bass to stay in the band. He was given a two week period to practice and that is exactly what he did. For 12 hours a day Robbie played the hell out of his bass until his fingers, “‘were hard as nails.'” After a quick rehearsal, Hawkins turned to Robbie and spoke: “‘Son you got the job. Stick with us, and you’ll get more nookie than you can eat.'”

In 1963, Robertson, Helm, Danko, Manuel and Hudson split from Hawkins and headed out to New York to obtain a record deal. They were tired of touring and hadn’t released a full album yet. Now known as Levon and the Hawks, the boys would continue to play small time gigs until August 1965 when a young folk 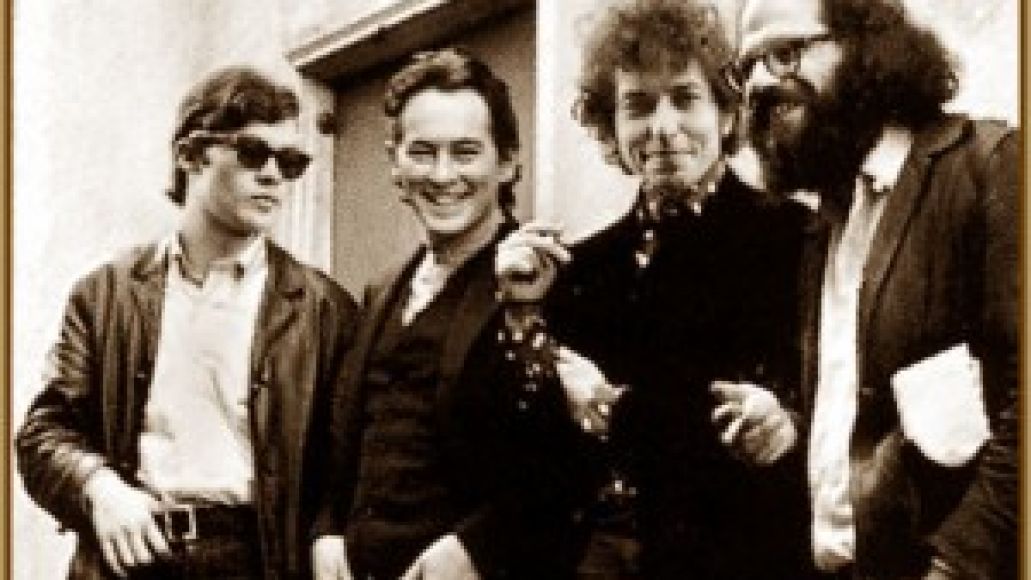 singerapproached Robertson and Helm asking them to play with him. The folk singer wanted to know if they would accompany him on a tour of the US followed by a tour of Europe. His name: Bob Dylan.

Robertson and Helm accompanied Dylan to California in August 1965. If you know your music history, you’ll recognise these dates as some of Dylan’s first live electric concerts. Needless to say, from the US to Europe, folk purists did not take a liking to Dylan going electric. Crowds booed and threw garbage at Robertson, Helm and the other members of Dylan’s band, who were all ahead of their time. While crowd responses were mixed, Robertson’s guitar stylings inspired Dylan: “‘We were the first rock band that played in some of these old arenas and coliseums, and Robbie’s guitar used to reverberate around the big concrete buildings like a giant steel bullwhip. It was intense. Bob was hot-wired into it…He’d bend and grind, stage front, miming Robbie’s solos.'” Although Dylan brought Robertson and Co. massive accord and success amongst their peers, The Hawks never lost sight of becoming their own band without relying on a lead singer.

Shoot forward to Woodstock, March 1967. After a short absence from The Hawks, Helm rejoined his friends in the country setting of upstate New York. Immediately, the boys began to settle in to the rustic lifestyle: chopping wood, building fires, growing beards, hunting, fishing, cooking dinners, warm fireplaces surrounded by many musicians playing various instruments. Music could be heard late into any night beaming out of the basement of the Big Pink, where The Band created its legendary status.

No longer The Hawks, Robertson and the boys wanted to be called The Crackers; however, everyone around Woodstock just referred to them as The 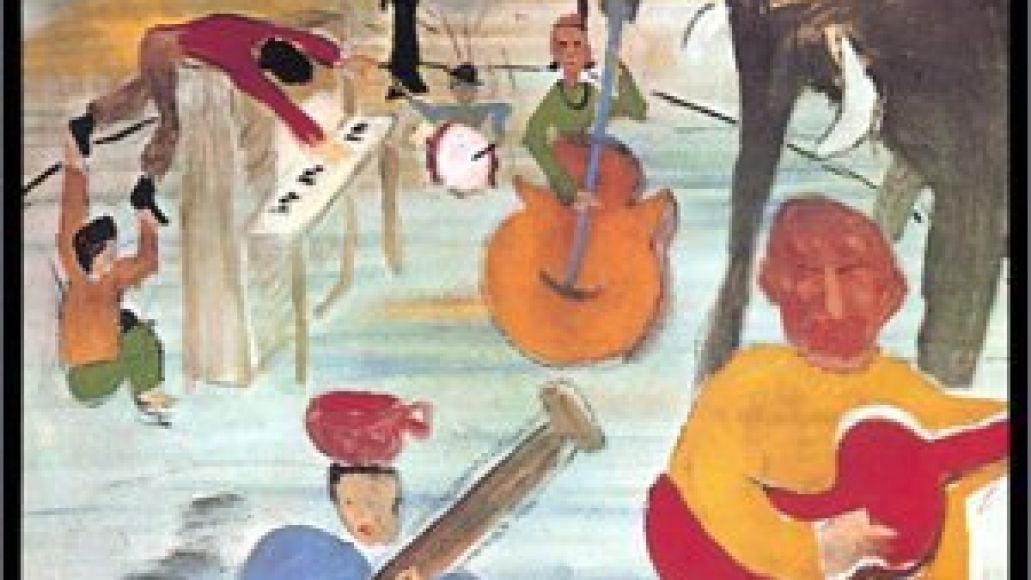 Band. When their debut album was released in 1968, Music from Big Pink there was no mention of The Crackers, just simply The Band. Never wanting to produce music for notoriety or fortune, The Band was a fitting band name for these boys, so they went with it. Of course, history speaks for itself, as Music from Big Pink was an instant hit featuring legendary tracks: “Tears of Rage,” “The Weight,” “Chest Fever,” and “I Shall be Released.”

While other lead guitarists of this time were commanding the spotlight with ultra fast paced notes, Robertson worked silently beside one of the greatest groups of musicians ever assembled. Sneaking in quick licks between organ and piano breaks Robertson still made his presence felt on Big Pink. Essentially, Robertson’s wide range of guitar talent allowed the band to complete an album with a handful of different genres: R&B, soul, folk, country, rock and roll, and classical. Despite Hudson’s label as the musical brain of The Band, it was Robertson’s guitar on Big Pink that helped create a rock-country sound which would strongly influence bands such as The Eagles.

Following Big Pink, The Band would tour the states at select venues, including a performance at Woodstock 69, but most of their time would be devoted to their self-titled follow up album. The Band. Released in 1969, the album found the band more success with tracks, “Rag Mama Rag,” “Up on Cripple Creek,” and “The Night They Drove Old Dixie Down”, and Robertson would be credited with writing or co-writing all songs on The Band. Once again wondrous piano, organ, bass and vocals, along with intermittent guitar would define The Band as one of the greatest acts in music. Following 3 more albums, endless days of touring, car/boat/motorcycle accidents, increased heroin use, and alcoholism brings one to 1976 and The Last Waltz. Weary from 16 years on the road, Robertson approached the other members of The Band about calling it quits, rather going out with a bang. After constant legal bickering and refusal to disband from Helm, The Last Waltz was finally scheduled for Thanksgiving day 1976, in San Francisco at the Winterland Ballroom. For $25, fans received a Thanksgiving Dinner, complete with all the fixings and a 6 hour concert by The Band, which even included special guests: Hawkins, Dylan, Neil Young, Joni Mitchell, Muddy Waters, Dr. John, Van Morrison, Ringo Starr, Eric Clapton, Ronnie Wood, Paul Butterfield, and Neil Diamond, all filmed by Martin Scorsese and released as a feature film (now a must own DVD for any music fan). In The Last Waltz Robertson confides to Scorsese his reason for ending such as strong legacy: “I don’t know if the years connect or if its coincidence or what but seems like that’s it, that’s what The Last Waltz is. I mean 16 years on the road, the numbers start to scare yah. I mean I couldn’t live with 20 years on the road, I don’t think I could even discuss it.”

There’s debate about it that Robertson was never the glue that kept the band together, that credit would go to Hudson, however, he was there when the boys needed him most, e.g. Helm’s short departure. When the fruit came flying, during the Dylan tours, Robertson always believed they were playing something special no matter how bad the crowd response. His blood curdling licks with Dylan were long before Jimmy Page exploded the roofs off of American stadiums. For all of his hard work and skill with The Hawks, Bob Dylan, The Band, and The Last Waltz, Robbie Robertson will always be considered an Icon of Rock.

Book: This Wheel’s On Fire, Levon Helm and the Story of the Band. By Levon Helm with Stephen Davis

All quotes taken from Helm and Davis’ book.