“In Consequence Of Sound’s pursuit of newer perspectives and reader interaction, we present a new feature dubbed Rock History 101. This feature will specifically examine songs both past and present that touch upon significant historical events throughout world history.”

In 1986, the Reagan Administration entered into its second year of the second term in office. The Iran-Contra affair hadn’t fully been exposed at the time, and a group of leather jacketed punks from Queens, NY called The Ramones were entering their twelfth year together. As a result of their hard work ethic, the quartet released their ninth album entitled Animal Boy. Coming off the heels of their back-to-the-basics and critically acclaimed album, Too Tough To Die, Animal Boy took the Queens natives in a 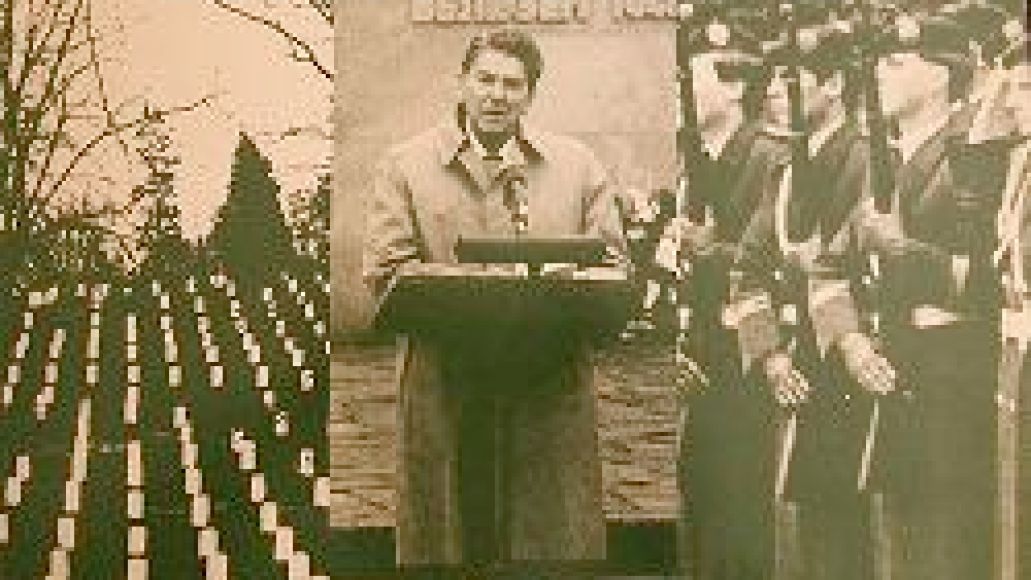 much more serious direction. Off the said album, the two biggest cuts became instant Ramones battle cries: “Somebody Put Something In My Drink” and the featured song here, “My Brain Is Hanging Upside Down (Bonzo Goes To Bitburg).”

About a year before the release of Animal Boy, President Reagan had made plans to observe the 40th anniversary of V-E Day. As a result of preplanned events, West German Chancellor Helmut Kohl took the opportunity to show the strength between the U.S. and Germany and mend the differences between the nations that existed forty years prior. After all was said and done, President Reagan’s trip to Bitburg on May 5th, 1985 immediately caused outrage within the United States. It was revealed that forty-nine members of the SS were buried in the cemetery, some of which committed the murders of American POWs. This caused outrage not only with the Jewish community, but for former American soldiers as well. Reagan said of the soldiers that they were “victims of Nazism also…drafted into service to carry out the hateful wishes of the Nazis.” Needless to say, from a regular standpoint, it appeared that Reagan was defending the German soldiers, comparing them to the victims of the Holocaust and supporting Nazism.

Joey Ramone, himself Jewish and sickened by Reagan’s visit, Dee Dee Ramone and Plasmatics’ keyboardist/bassist Jean Beauvoir wrote the song in protest as well as a document of American history. “Bonzo” refers to the chimpanzee in the two movies that Reagan starred in during his acting career in the 1950’s, “Bedtime For Bonzo (1951)” and “Bonzo Goes To College (1952).” Originally the song was deemed simply “Bonzo Goes To Bitburg,” but guitarist Johnny Ramone refused the title because of his strict conservative approach and full support of Reagan.  The title was changed to “My Brain Is Hanging Upside Down” with “Bonzo Goes To Bitburg” appearing in parenthesis. Regardless of the change, the song is simply known as “Bonzo.”

Joey wrote the lyrics about his disgust at Reagan’s visit and the disrespect to the Jewish community. Here are those said lyrics:

You’ve got to pick up the pieces c’mon, sort your trash
You better pull yourself back together maybe you’ve got too much cash
Better call, call the law when you gonna turn yourself in? Yeah
You’re a politician don’t become one of Hitler’s children

Shouldn’t wish you happiness, wish her the very best
Fifty thousand dollar dress shaking hands with your highness
See through you like cellophane you watch the world complain, butyou do it
anyway who am I, am I to say

I’d like to thank The Eighties Club for helping in this research, as well as the quotes. As this was long and lengthy, as any good history lesson should be, I hope you enjoyed your history lesson for today!