In today’s music scene, if heavy metal were a steak, it’d be rare right off the animal’s back. Between the exams, the summer heat and the overall life changing experiences my 23-year-old self has gone through this summer alone, going to a heavy metal show with my friend Chris certainly added much more spice to an otherwise hectic life.

The show kicked up with two local Tallahassee metal bands of which their names escape me at the moment. The first one definitely had that sludge metal/doom metal slice of steak pie written all over it. The influences of many 90’s stoner metal bands, most notably Monster Magnet and Fu Manchu, certainly filled the neon lights of the club with a heavy essence on sound and light. The second band took an instrumental approach. Given they only performed three tunes in their set, each song lasted about 8-9 minutes in length. They reached out for a much more emotional and instrumental aspect in the sense of contemporaries Red Sparowes and Pelican. Ironically enough, ex-Pelican drummer Chris Wozniak was in the crowd waiting for his trio of Chicago metalheads, Lair Of The Minotaur, take the stage. 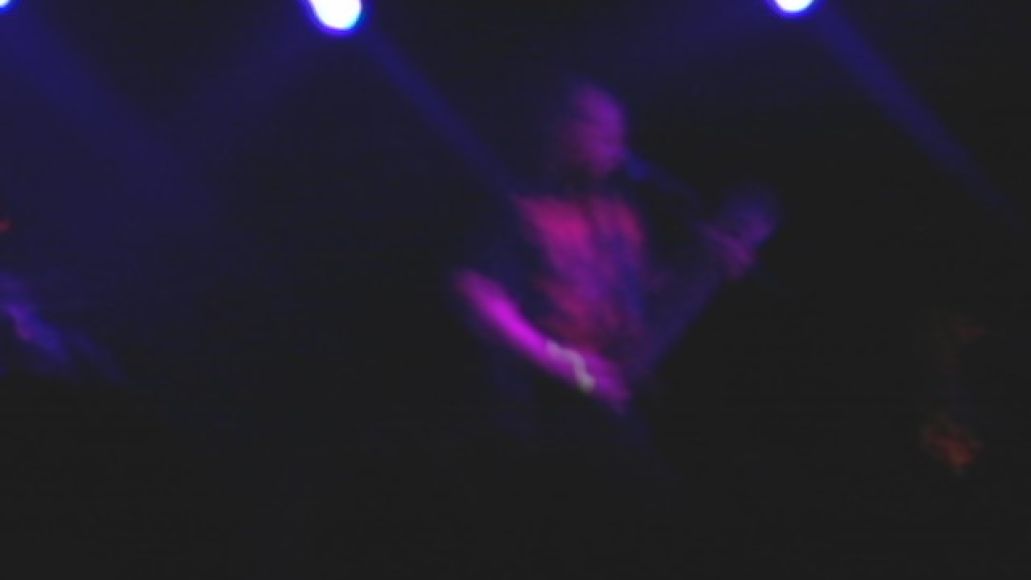 After the second local act finished, there was a faint sense of dark neon prowess that echoed in the belly of the Beta Bar. Chris and I waited in anticipation to witness some truly aggressive metal in the works. To pass the time, we clinked our pints of Tucher and discussed the endless possibilities of how heavy metal enhances peoples’ lives everyday. After the mighty German Hefe-Weizen settled in our bellies, Lair Of The Minotaur roared out of their cages and opened the set with an axe-wielding version of “Hades Unleashed” Bassist DJ Barraca and guitarist Steven Rathbone punched forward battering rams of meaty chord progressions over Wozniak’s towering double bass. By the end of the song, Rathbone announced that this was their first venture into Florida and that everything so far was “incredibly badass.” The band followed with a barrage of awesome metal cuts such as “The Ultimate Destroyer”, “The Enemy Of Gods” and the bone-crushing “War Metal Battle Master.” Chris and I growled and banged our heads to the awesome tunes these three Chicagoans gave Tallahassee. The band certainly gave it all they got and had the crowd by the necks. Needless to say, Lair Of The Minotaur proved themselves in this rinky-dink capital of Florida and did it well. 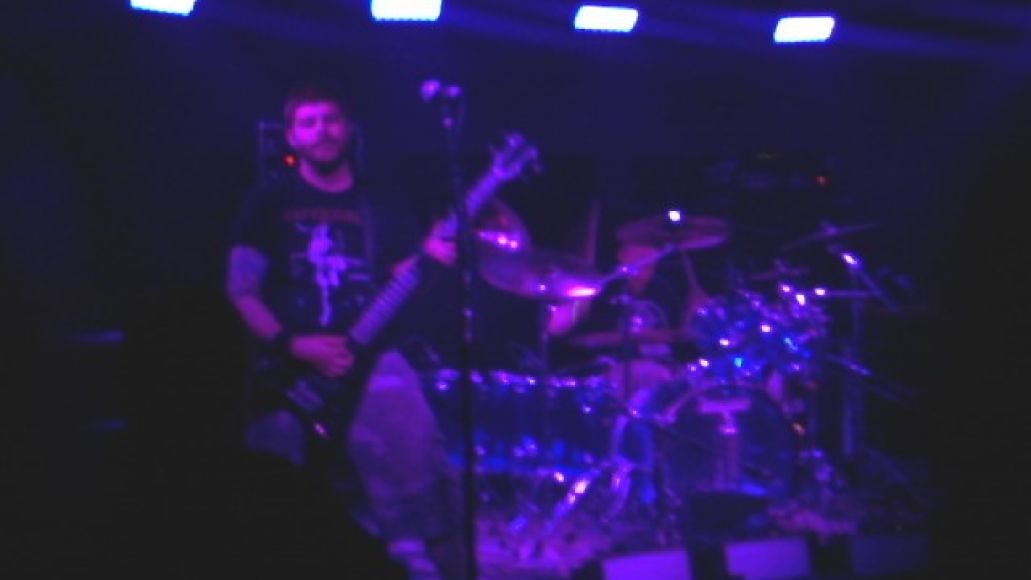 In between sets, I got an opportunity to speak with bassist DJ Barraca for a few minutes regarding the tour and crowd reactions. Barraca, a very awesome dude, told me about how they never toured the south and that their next gig after Tallahassee would be in New Orleans. Coming back from a life changing to the city back in April, I told him that they’d fit right in and that it’s a helluva town to go to. Barraca was equally excited and shared his enthusiasm with a gigantic smile painted above his beard. Regardless, the trio were awesome dudes and I wished him well on the tour. Talk about class, these guys definitely had it.

Savannah, Georgia sludge metallers Kylesa took the stage, and man were they heavy. The band clanged and hammered their set with two powerhouse drummers that didn’t miss a beat (insert rimshot) and were as smooth as the back of a horse’s mane. Guitarist Laura Pleasants battled sound problems early on, but roared back with some sick guitar work over the drums. It was the type of atmosphere that made bones rattle to the beat. I literally felt my rib cage doing double bass in sync with both of the band’s percussionists. They put on a damn good show and yeah, they brought the shake down on the bar’s neon-filled noir. 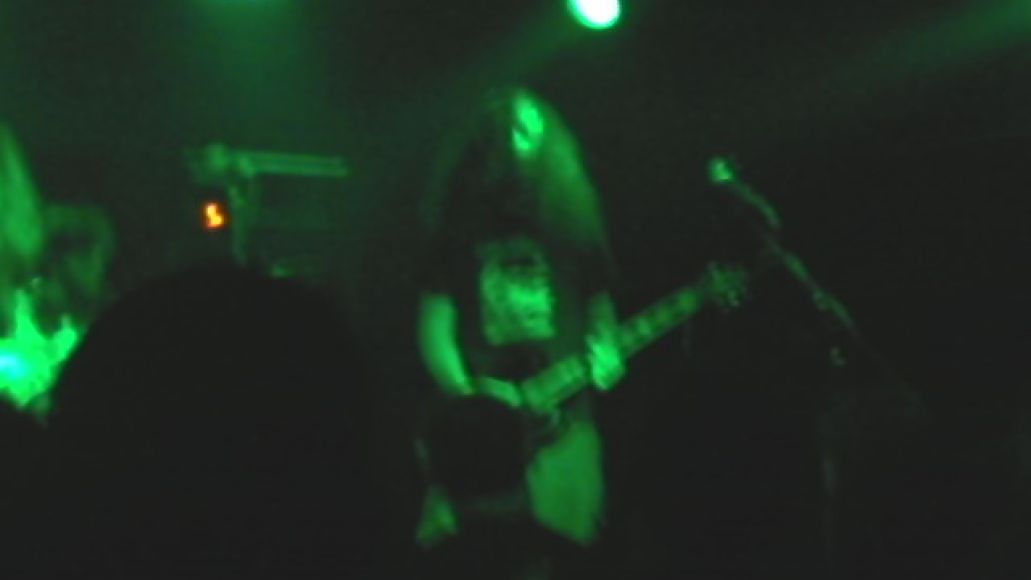 Berlin’s experimental metal band The Ocean closed out the show and they brought a lot of elements I hadn’t heard in heavy metal in a long time. The band set up laptops off to the side of the stage and in between song intermissions, visions of classical music danced and frolicked like swamp creatures waltzing on the edge of the world. The band played a blistering set with both guitarists throwing their equipment around and turning The Beta Bar into a slaugterhouse, like rag dolls on fire. The band announced on stage that this was their first tour in the United States after playing in east Europe and that the crowd response had “unbelievably phenomenal.” Swinging leads, throaty gutteral vocals, and a spectacular light show flowed through the band’s set much like the vessels to a heart of glory. The Ocean not only sold the show, but they encouraged everyone to get involved in the music as well as thanked them for their support.

It’s rare in this town when a good metal show goes on, but when it erupts, it makes volcanoes pale in comparison. Lair Of The Minotaur slayed the metal sound with excellent precision and The Ocean made a great States debut. There’s hope to the future and it starts here. Both bands blew my expectations and proved metal is far from dying. Home is where the heart is, and mine belonged to The Beta Bar last Tuesday night. It was social anthropology at it’s best, and I couldn’t have been happier seeing culture clashes left and right throughout the whole night.

The Ocean waves; Lair Of The Minotaur slays The Beta Bar (6/3)