If you were around Camden Town on a Thursday afternoon in the middle of July, you could have caught the sight of a Londoner Groupie, leaving the office early (which she had never done before) just to catch a train to the most overrated airport in the UK, namely Gatwick. Because no matter if the destination was a European capital city such as Riga (Latvia), the Baltic regions up north (Estonia, Latvia and Lithuania) haven’t been dignified with direct flights from Heathrow yet. Well, give them time, after all, they don’t call them “emerging markets” for nothing.

And if you’re wondering already “Where on Earth is Latvia?!”, I won’t argue, because if you are around my age, this country appeared on maps just after you ended all your geography stuff in elementary school. But as I landed in Riga at 11.30pm finding a sunset welcoming me (which would’ve stood up technically all night), I had the feeling right away that such a place has been definitely underrated in recent years.

Thankfully, for the second year in a row, Positivus, the biggest music promoter in the Baltic regions, put up the Positivus AB Festival, which  is already the most important one around this side of Europe, and the  headliners of this year, featuring Manic Street Preachers, Travis and Fatboy Slim, were just another confirmation of its establishment.

So how do you start a festival from scratch in Latvia?

Easy enough, you take over a couple of meadows in the neverending forests(which cover up everything ’til the beach), wisely choose a location conveniently around your sister-countries such as Estonia, put up two stages and a tent camp, and there you go! There you have the second edition of the Positivus in Salacgriva.

I was there for the opening of the 2 day festival. Despite the fact that no one had walked those forest-y paths and strolled through yet, I found that, unlike some other European Festivals, Positivus had an incredibly chilled out vibe. It was all so self sufficient, easily described as a little village comprehensive of everything within just walking distance. And the distance was actually walkable in flip-flops. No mud, no imaginary paths in the middle of the wilderness; instead, a little multicoloured, self-sufficient town. I’d like to be a citizen of such music-town actually, anytime. 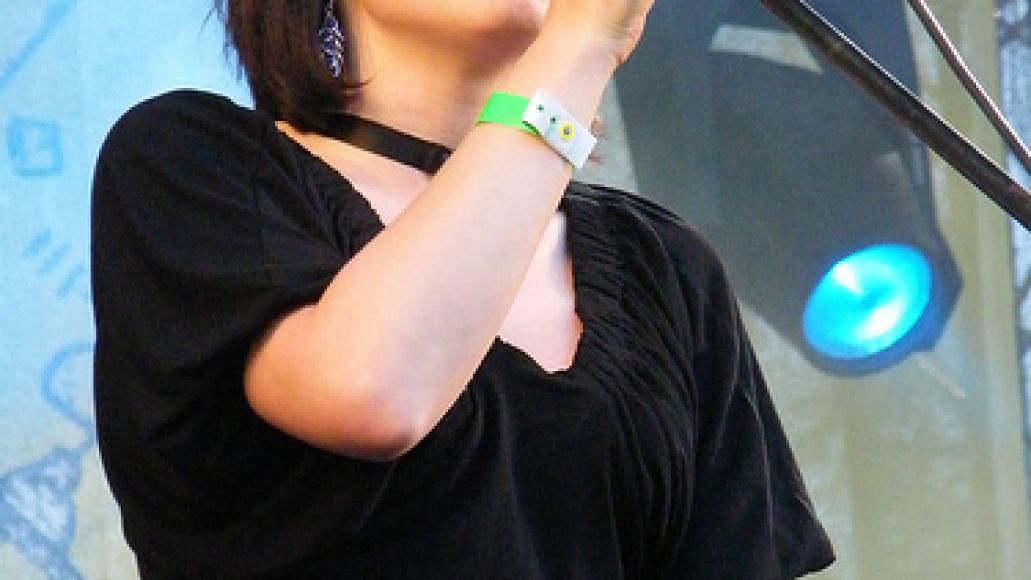 And Latvian audiences really are great. I loved them in no-time! I could see the excitement of playing there expressed by the bands, and it might’ve been actual this time instead of the usual cliché, “Oh, it’s so great to be here!” Latvians know when to loosen up and when to chill out. And according to Travis’ singer Fran Healy, “They’re the most hand-clap synchronized crowd ever!”

On the Tele2 stage, bands started to play just right after the festival opened at 4pm on Friday , the 18th of July. The honor to open Positivus was granted to Lithuanian singer Živile(above right). I caught most of her set with great pleasure. I don’t know much about the average music culture and tastes in Lithuania -where this young lady comes from- but her sound is mellow and melodic, with most of her songs based around her voice, as she sings along with her acoustic guitar. Her songs’ relate everyday stories (in English, of 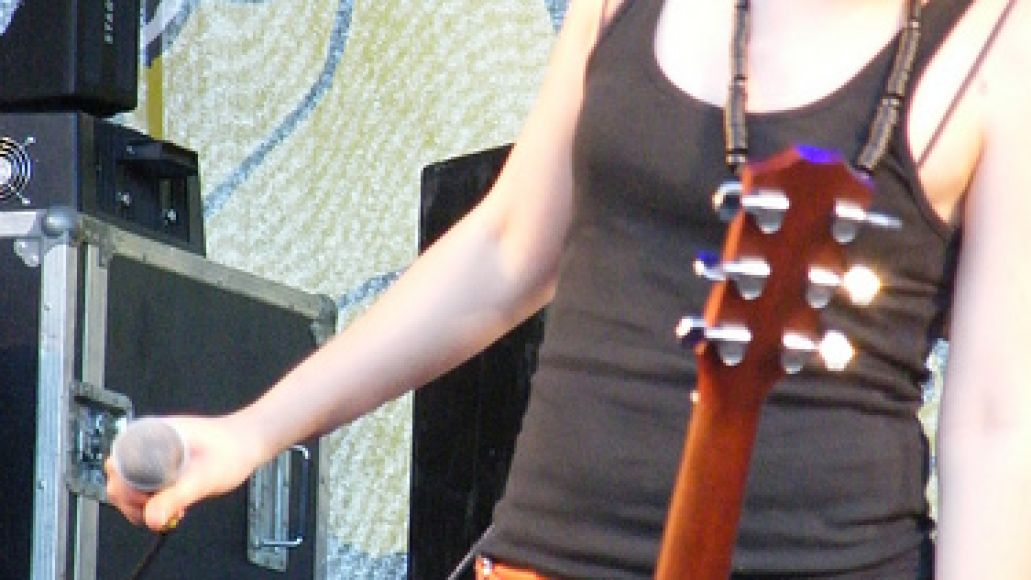 course) and she knows what it takes to sound nice and recognizable right away. Think Heather Nova or Liz Phair and you’re close. I mean she didn’t discover fire, but hey, she was pleasant to the ears enough to tie me to the Tele2 Stage.

Next up was Astro’n’Out (right), an apparently big  Latvian act (at least in their own country), that owe much of their style to Anouk. Their name  didn’t sound all that new to me, and apparently for a reason, as they were  nominated for last year’s “New Sound of Europe” at the MTV Europe Music Awards (although they were eliminated quite early if I remember correctly, losing to Baltic fellows Bedwetters from Estonia). They seemed to be a nice bunch of guys, although the way the energy was split between the members of the band couldn’t help but remind me of the stage set for The Cranberries, meaning the girl’s the next big thing, the representatives of the  strong sex are merely satellites around her, at least for what concerns stage presence. I wasn’t around for their whole set, though people started to gather around in a much thicker way during their performance.

Back at the main AB stage, things were warming up, soundchecks were running, and the sun of course wasn’t even close to set. So there I was, back in time, to see I’m From Barcelona (below right) starting the party over. Funny thing was, at the beginning, it was more of them on stage than us in front of it. And even before that, my first thought of a 29 piece band was either “Is this the new Kelly Family?” (not in a good way though) or “Do they need to have this many members? Or do they need to know that at least 29 people like them?”. See? I had the worst bent ever towards these Swedish fellas. In my own personal scale, they had to work up from somewhere much lower than zero. The result? They worked up to a 10, with some moments even at a 10+. So much so that, at a certain point, I just had to throw away my press pass and join the screaming and jumping crowd.  Yes, this was the Stockholm syndrome they started at the festival (although actually, they are from JÃ¶nkÃ¶ping in Sweden, not Stockholm at all).

Balloons, colors, a purple inflatable boat to surf the crowd with and weird blow-in instruments to have the crowd representatives play for them, skull-shaped maracas and multicoloured confetti’s rain. Got the picture? Well trust me, you should get the feeling they were spreading out! As far as 2 minutes into the show, there were already red balloons 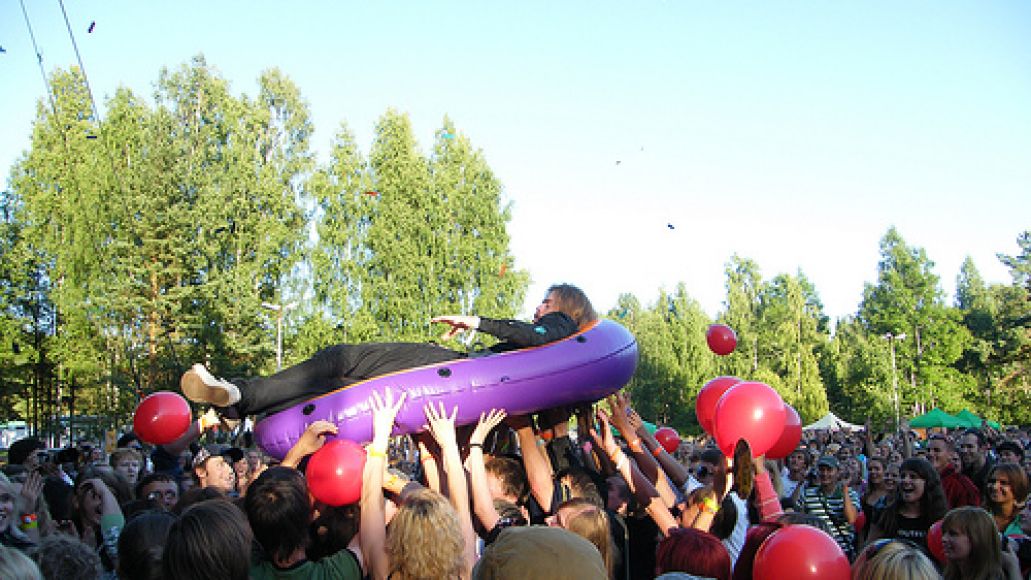 They even managed to squeeze in a re-imagining of Madonna’s “Like a Prayer” in the middle of their song “Rec & Play”, thanks probably to the fact that the two songs share pretty much the same harmony. So you see, as I overcame prejudice it was even too obvious to see why such an expensive , project, comprehensive of 29 elements, were signed to a major like EMI.

The band left such a vibrant energy on the crowd that I saw my friend who was with me (the last die-hard Travis fan) actually wishing herself that the set by I’m From Barcelona wasn’t over yet when they left, even if that was meaning Travis were then up. 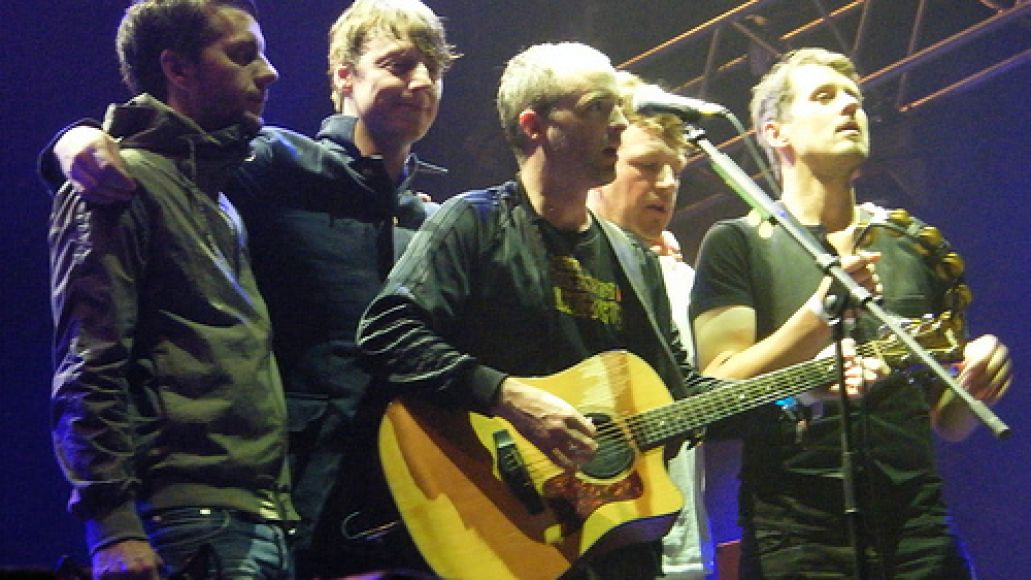 g went wrong with the light-settings, as in “someone forgot lights were needed, even if at 10pm the sun was still up!” (Sorry to reiterate on the sun fact, but that was most impressive for this Southern-Europe born girl) However, after an hour or so, the Scottish Quartet (below right) came on stage. One thing above all you want to remember about Travis  is that they really are enchanting from the stage. They don’t just play, they seem to live their music. For instance, guitarist Andy Dunlop, after seeing him playing a solo while stage diving over the crowd, becomes possessed by music.

As dusk began, the whole meadow (and it was sort of a football field sized meadow) looked like it was filled with human beings, not a spot was empty. Hand-clapping and singing between songs were enough to make Fran Healy start an improvised beat-box to keep up with the crowd, who kept singing, “Closer, Closer, Lean on me Now, Lean on me Now” much longer than anyone probably expected. I still don’t know how and why, but by the end of the 2 hours set, Healy managed to cut one of his fingers. Despite bleeding,  he didn’t stop at all; instead, he used it as an excuse to make a sort of “blood pact” with Latvians, who having now earned his blood, were then asked to jump without restrain for the last, epic song of Travis’ set, “Why Does it Always Rain on Me”. And given the earthquake feeling during the last chorus, I’d say pretty much everyone there agreed on the pact. When Travis went off the stage it was a little bit later than midnight and one band was still left to play the main stage.

By the time Manic Street Preachers took the stage, it was nearly 1am. Even so, the crowd gathered again, filling up every little spot on the ground. It was so packed for the Welsh band that it was quite a hard thing for me to get close enough to steal some shot of a singing James Dean Bradfield (who happened to be seated next to me on my flight back to London the next day, but let’s not get lost in the gossip here, shall we?). And apparently, 23 years lost, and I had underrated them as well. 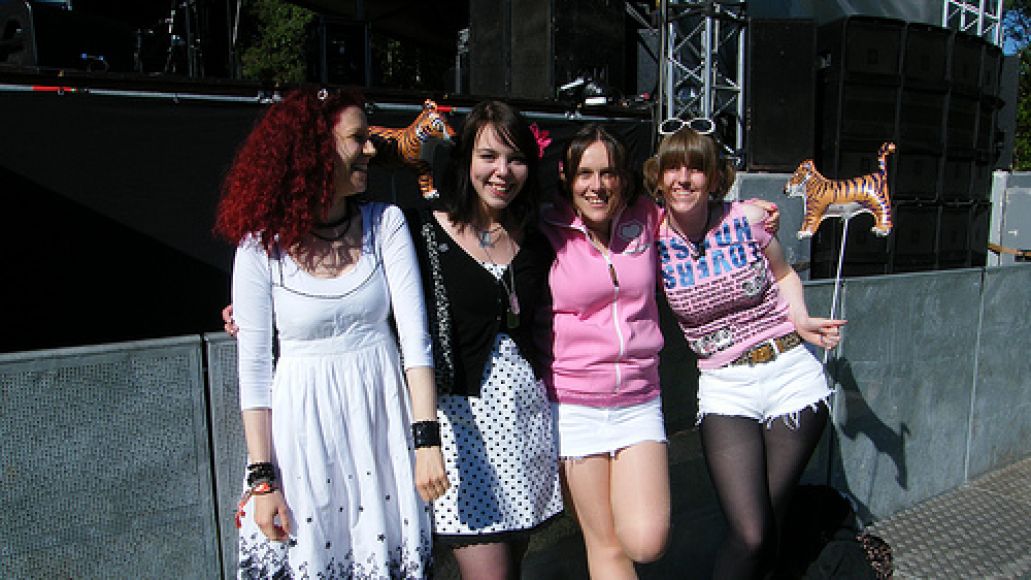 They seemed to have incredibly devoted fans, and well worth them. I stumbled across some of them during the afternoon: a bunch of girls all dressed up with tiger-ish patter details (then I realized it was probably due to the fact that the latest Manic’s album was titled Send Away The Tigers) who flew all the way from England just to see them. There was no way even just one of them would have moved from the first row barriers from the moment they got into the festival. During the driving back  to Riga, the radio broadcasting the show live confirmed what I thought when I saw their presence on stage for the first couple of songs: they rocked.

The party apparently kept on up ’til the early morning lights, with DJ sets in the Shark tents. And on the next day, the 19th of July, Latvians experienced a nice line-up with bright stars as Fatboy Slim performed on the AB stage and British Sea Power closed the dances on the Tele2 stage later that night. Good sets apparently, but the opening day just rocked too much for anyone to keep up with that.

So in the end, as a Londoner Groupie got back to Gatwick, still experiencing the sparks of highs and lows (the lack of sleep might’ve been a reason, but the nice idea is that sharing the flight with half of Travis and Manics was a good part of it as well), I can tell you that if the line-up gets anything closer to this year’s for the next one, Positivus AB Festival might become a great excuse in the future to experience an unusual holiday in the very underrated country of Latvia.