Donita Sparks, former front woman of L7, is back to making records with her new backing band The Stellar Moments (also featuring Demetra Plakas of L7 on drums). And it’s no mistake that the 45 year old vocalist, guitarist and songwriter has come a long way since L7 when they disband in 2000. You remember L7 right? They were that all up in your face grrrl band that got everyone talking in the early 90’s. Sparks definitely was a wild car then. Talk about the infamous moment in her career where she threw a bloody tampon at the crowd during the 1992 Reading Festival! Well crazy ‘ol Sparks is back, but she has grown up a whole lot since the L7 days. 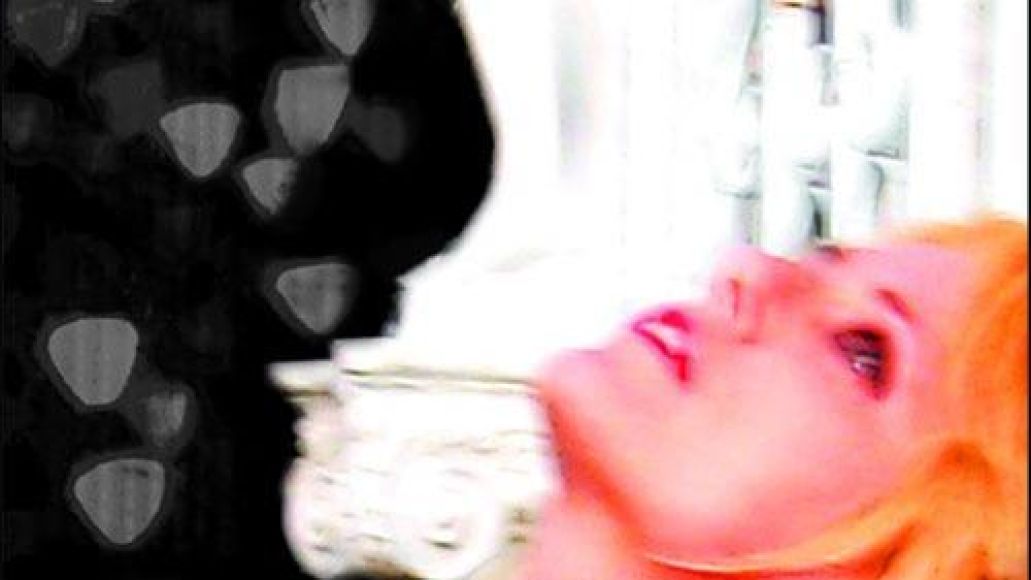 This of course is why the release of Transmiticate in 2008 probably got all the die hard L7 fans’ panties in a bunch. Every Sparks fan must have been aching to hear more of her rebellious tunes, but at the same time it had been eight years and that’s a mighty long time to go without a record. Well if you were one of the people wondering ‘What if our beloved Sparks has gotten soft with age,’ never fear! Transmiticate definitely shows that Sparks is just as awesome now as she was then, just in a slightly different way. Her focus shifted towards more intense vocals rather than heavy guitar playing on this album, but I think that was a change for the best. Sparks is still filled with the same energy driven spunk we grew to love in the 90’s, but Transmiticate also shows that she’s willing to adapt with the times and create a new sound which still lets her roots shine through.

The first few tracks start off heavily influenced by Sparks’ L7 career, except this time it’s a little washed out. Honestly it reminded me of the next generic bonus song in Guitar Hero. Don’t get me wrong songs like “Dare Dare” and Headcheck” are some really fun and catchy songs that make you want to dance and maybe even kick something, but I feel L7 could have played these songs better. They just had a little more spunk in their music back then. Either way the first few tracks are solid, they just seem a little too basic at times.

Crikey! But what is this? The album starts to take a major shift at track five! And wow does it get good. The Stellar Moments start mixing and matching to create a more refined sound, which shows that Sparks is a talented well versed musician who’s still hip. At this point, the music takes on a sort of fun and grungy sound that is very reminiscent of Stone Temple Pilots and Garbage. “My Skin’s Too Thin” seems like a super personal song for Sparks, but she sings it confidently and still makes it fun. “Curtains for Cathy” is probably my favorite on the album though. It has this sort of feel that just grabs you and makes you listen to it. Later on Sparks compares herself to a creampuff (which I still think is a little scary) and gets totally adorable in her dialogue about this guy in “He’s Got the Honey.”

Unfortunately their current single is “Infancy of a Disaster,” which you can watch  here. However, I’d recommend you didn’t. In fact, if you thought the song was bad just run away from this video. It’s no mistake that “Infancy of a Disaster” is the weakest song on the album and the video definitely does not help give it a boost. Just remember that although the single is just awful, the rest of the album is purely fantastic (no joke). Isn’t it funny how that works? So please don’t go running off crying when you hear this song on the radio or through itunes. Just press skip and get prepared for an album that’ll rock your socks off.