This past weekend, CoS’ Allison Franks took in the sights and sounds of the inaugural Outside Lands Music Festival and put them into words for all of us to enjoy…

The final day of Outside Lands was fantastic. The sun decided to come out and play for a bit and we were delighted to bask in some warm weather for a change. The crowd was smaller compared to the previous two days, but not by too much. Although the crowd started pouring in around 3:30 p.m., everyone that came out early enjoyed themselves and took it easy on a fine Sunday morning. And the music was (in my opinion) the best yet.

Jackie Greene kicked things off at 1:00 p.m. on the main stage with his bluesy and soulful rock music. Greene had a lovely southern drawl as he sang, which helped his music take on a much sexier appeal. The band’s sound was reminiscent of 1960’s and 70’s rock and roll, drawing from artists The Rolling Stones and The Doors. It was really the perfect music to start off the morning and get your mind off of yesterday’s hang over. Greene remarked on his performance later, saying “I definitely recognize the historical value of playing at Golden Gate Park, but for me, it’s really special to play in your home town. I can just roll out of bed and get here in like 5 minutes. It’s great. San Francisco really did a great job with this thing.” 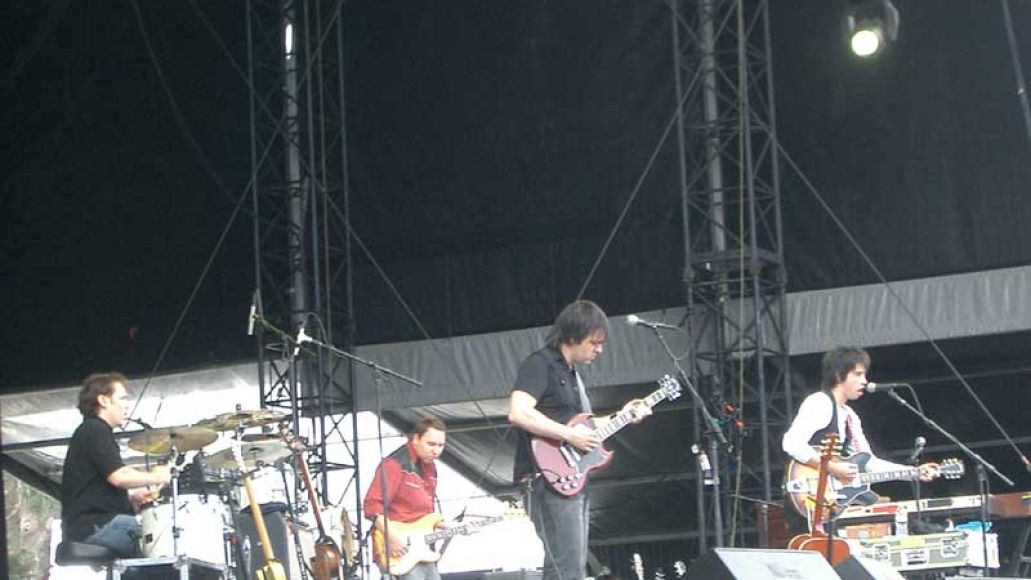 Next up was Nicole Atkins and the Sea (photo below) who put on quite a rockin’ show. There was a lot more intensity and energy in the group than when I saw the band last year in Atlanta, GA, with Atkins seeming extremely confident. Kicking things off with “Party’s Over,” the band continued to play a majority of their faster paced songs, while not forgetting their slower hits like “War Torn” and “The Way It Is.” The set even included an old Atkins song “Carouselle” from her Bleeding Diamonds E.P. and a cover of Patti Smith’s song, “Pissing In A River…” At the press conference later that afternoon, Atkins spoke out about her earlier performance claiming that, “since we are always the first set at festivals, we aren’t given much time and sort of just play a greatest hits set. It also really depends on what we were listening to before the show. Like if it was Mastodon then it’d be more metal. Well, at least in my mind anyways.”

At about 2:00 p.m., Stars got things going on the Twin Peaks stage. (Stay tuned for an interview with lead singer Torquil Campbell that will be posted up on the site in the next few days.) Campbell and Amy Millan 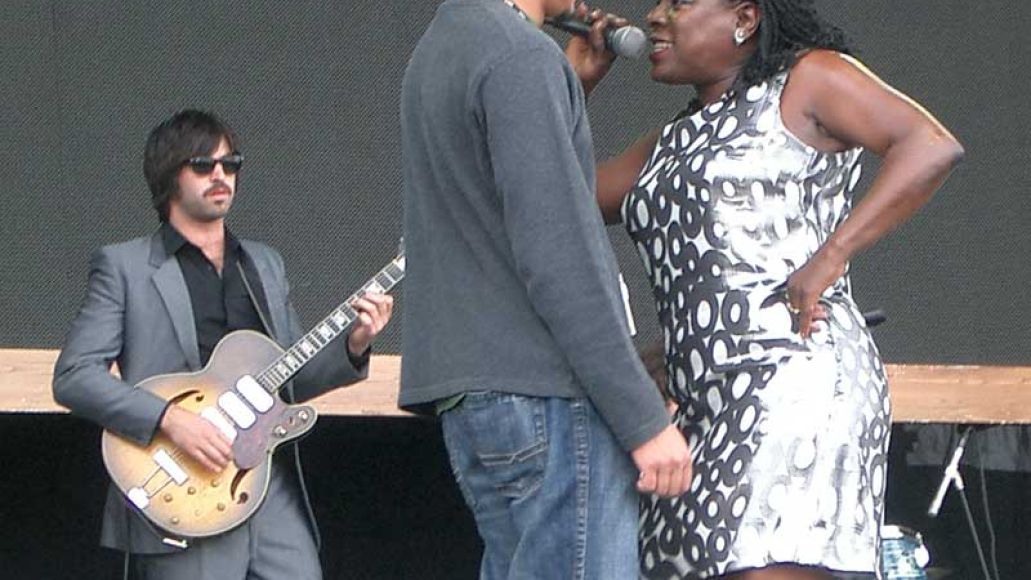 took turns singing lead and Campbell was moving all over the stage, playing different instruments here and there. He even fell over once. The stage set up was really beautiful; with white rose bouquets tied to all the instruments. Stars drew in a huge crowd and captured the attention of all the incoming people from the neighboring front gate entrance. Truly a stunning performance.

The party really started when Sharon Jones and The Dap Kings took the main stage. Keeping 1960’s soul music alive and part of today’s music scene, the band drew in a huge crowd that was ready to get down and boogie. The Dap Kings started things off with a few songs of their own, later introducing the fabulous soul sister we had all come to see. Jones got up there and started shakin’ it like it was nobody’s business. She did her very own versions of the “Mash Potata” and the “Boogaloo” and you could tell she was having one hell of a time up there. While singing tunes like “100 Days and 100 Nights,” “Tell Me” and “The Collection Song”, Jones managed to create her own funky dance party. Later on, she grabbed one of the backstage crew guys and sang “Be Easy” to him, while advising the guy how to get a real woman of his own. The crowd went nuts, so she brought up another girl from backstage and even got security to O.K. someone from the crowd to get on the stage and dance with her. This was surely one of the most entertaining and fun shows at the festival this weekend and everyone was sad to see her leave the stage.

A half hour later, Rodrigo y Gabriela (photo below) set up on the main stage. Definitely one of the simplest stage set ups ever, the duo got up there with their guitars and a couple of chairs. Rodrigo y Gabriela were phenomenal and it was mind blowing to watch their fingers at work. They initially played songs like “Tamacun” and “Diablo Rojo” together, but then split up. The duo battled one another for a while to see who would get to solo first and Gabriela won. She got up there and really showed us what she could do with a guitar. There aren’t even words to describe what she was doing, but the crowd was clapping to the beat and keeping rhythm for her as we all jumped up and down. Then Rodrigo came out to switch places with her. Soon after, he fooled around with his guitar for a bit, but then he waltzed up to the stage, got serious for a moment, and started to play the beginning riffs of a Jack Johnson song which made everyone laugh hysterically. Then he whipped out a wah pedal and started sampling songs by artists like Jimi Hendrix and The White Stripes until he finally found the song that everyone was hoping for, “Stairway to Heaven”. Gabriela got back up up and finished the song with him. The duo got everyone’s spirits high and we clapped so hard to keep the beat that our hands were raw. As they exited, we were left motionless and were sad that we had to stop dancing. 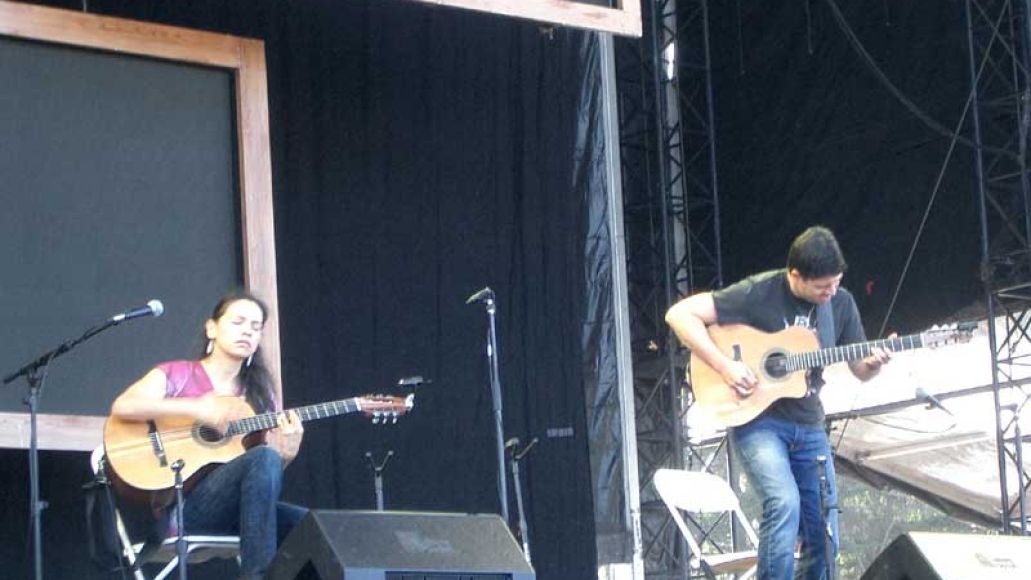 Thankfully, the dance party started up again within minutes, on the neighboring Avenues stage with Los Amigos Invisibles (photo below). And so began the electrifying Latin disco dance party extravaganza! The band delighted us with bouncy tunes which no one could resist, not even themselves. Singing in Spanish, the band touched on a mix between 70’s disco and 90’s Euro-pop. Filled with electrifying guitar solos, funky bass and one wild keyboardist, it was hard to tell if the band or the crowd was having more fun. Tunes like “Que Rico” and “Ponerte en Cuatro” just blew us away, making us want more and more. Unfortunately, the band wasn’t allowed to do an encore and the stage cleared in preparation for the evening’s main event.

Many people were already crowded around the stage in anticipation of Jack Johnson. For those of us coming from the dance party, part of ourselves were still moving and it was hard to mellow out and settle down for the calm music that Jack Johnson brings to the table. Nevertheless, everyone ran in close for Outside Lands’ final event and Johnson brought the festival to a pleasant and peaceful end. 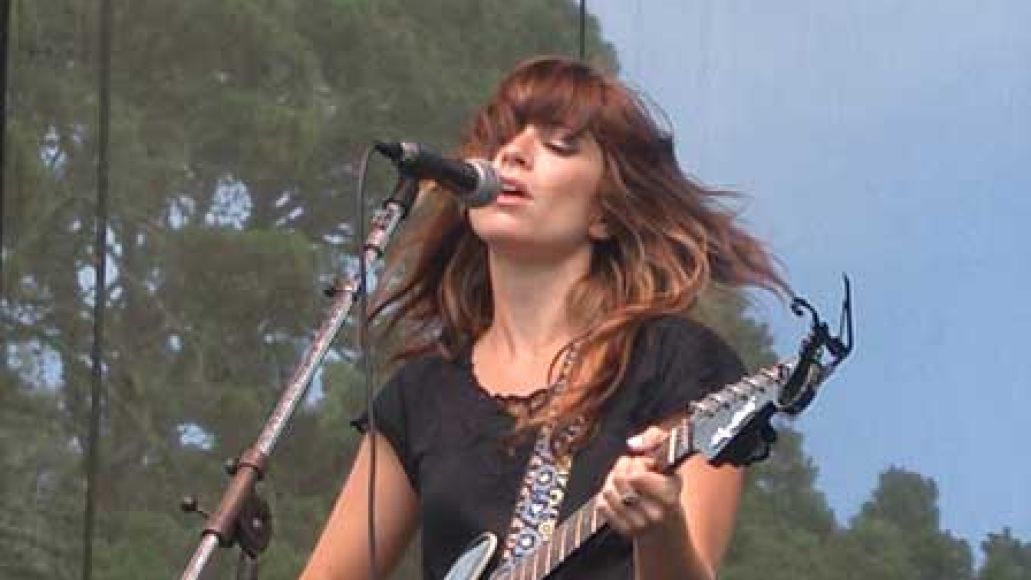 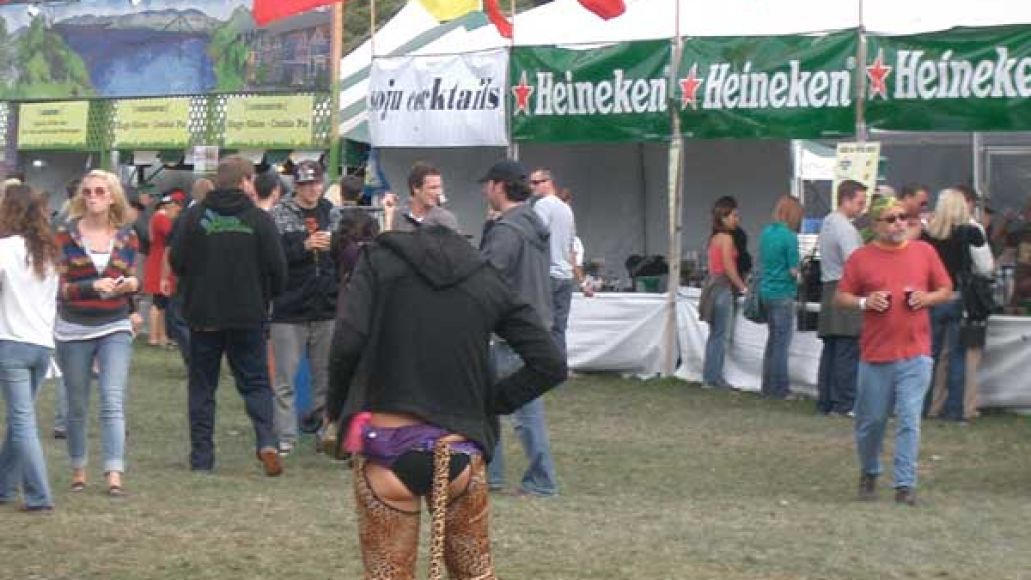 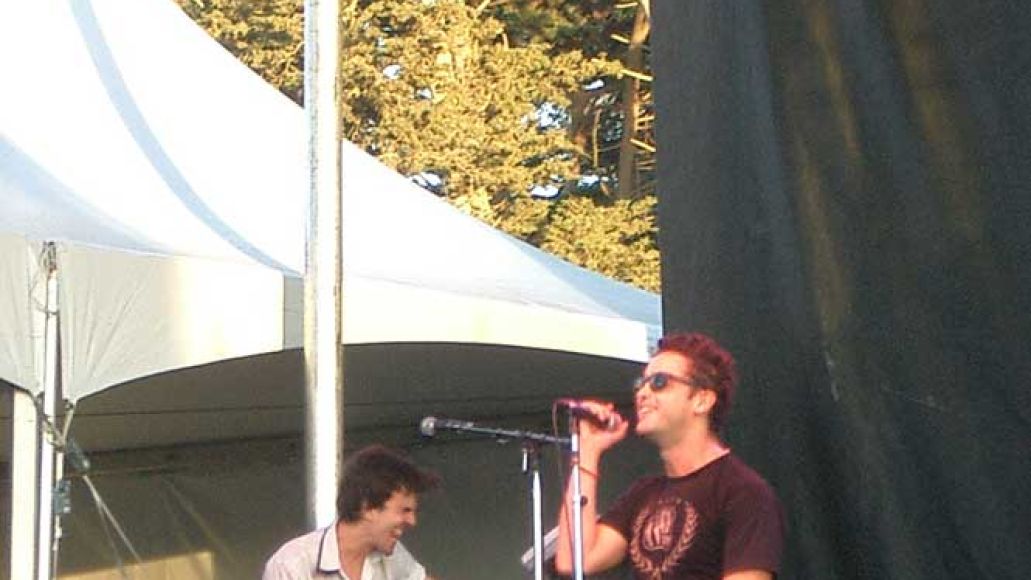