Cancellation was the theme of the day for live music lovers in the San Diego area on Wednesday. In the morning, word came out that the Black Crowes canceled its scheduled Saturday headlining appearance at the Street Scene music festival just four days before they were to take the stage.  Later in the day, as I was checking the Web site for the Belly Up Tavern to confirm the show time for the Aesop Rock/Mighty Underdogs show later that night, TMU were inauspiciously missing from the page. This show had been scheduled for months and I was hoping this was a mistake as I was looking forward to seeing the set from the new-ish band featuring Bay Area rappers Gift of Gab (Blackalicious) and Lateef the Truthspeaker (Latyrx).

When I reached the venue, which is located about 20 minutes north of San Diego by car, I asked around about the status of TMU for the show. No one had any answers, other than to say that they had canceled and that promoters had switched the opening acts (Yak Ballz was the replacement).  I asked the DJ that was warming the crowd up, DJ Artistic from San Diego, and he informed me that Gift of Gab had broken his leg but didn’t have any more information about the situation. He directed me to DJ Big Wiz, Aesop Rock’s touring DJ, who told me that it was indeed a foot that Gab had broken and it happened in mid-August, a few days before the band was to begin their 13-city tour.  “It’s real unfortunate because we were looking forward to having them on the tour,” said the turntablist. 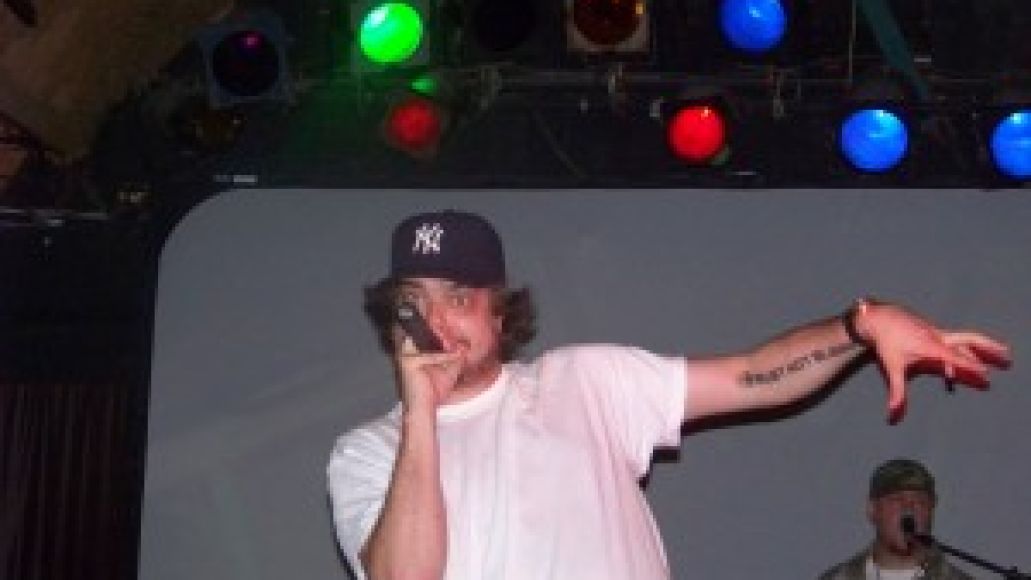 Even though this was devastating news, since I was previously only able to catch a teaser of TMU in a short set at Bonnaroo 2007, I decided to put this behind me and to look forward to catching a couple new opening acts that I have not yet heard, plus Aesop Rock, one of the most prolific emcees in rap music today.

First up was Grayskul, a Seattle-based rap duo on the Rhymesayers Entertainment label. I have been to the Belly Up more than 100 times since I moved to San Diego nearly a decade ago and it’s pretty rare that such a big crowd comes so close to the stage for the opening act, especially if it isn’t a big-name. Emcees Onry Ozzborn and JFK seemed to appreciate the crowd and looked happy to be there. Their short set was dark in theme and they were decent enough lyricists. Even though the crowd was larger than usual for the opener, they still needed a bit of prodding from Grayskul to get involved in the show (see: ‘Throw your hands in the air, and wave ‘em like ya just don’t care’). They finished off with their new single, “Missing,” which was very good. Before they took the stage, they had their video for the song playing on the screen towards the back of the stage. You can see the video here. Their style reminded me of a less-gritty Jedi Mind Tricks, although they are undoubtedly more rough-around-the-edges than the rap veterans.

Next up was Yak Ballz, who despite a name that makes my stomach turn, did a good job of warming the crowd up for Aesop. The independent rapper from Queens, New York, has been making music since the late 1990s and is an original member of The Weatherman and has collaborated with many other Def Jux recording artists. His set was decent, although I preferred Grayskul as far as the openers went. Noticeably, the crowd was getting a bit larger during his set and there were layers of excitement for the show: the fans up front were enthusiastic and singing along, the middle of the crowd seemed mildly interested while those in the back were drinking, socializing and trying to get the attention of the opposite sex.

After the set, the DJ started to get the crowd hyped by playing old school jams from Redman, NWA, Cypress Hill and Souls of Mischief. Although not sold out, the 600-capacity venue seemed almost full in anticipation of the headliner. 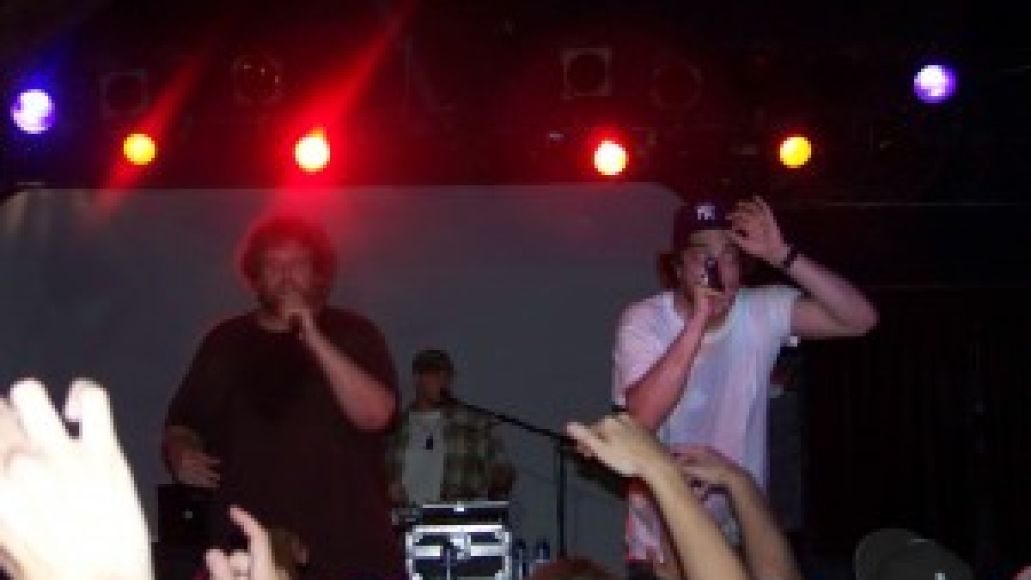 DJ Big Wiz took the stage and introduced the Queens-native headliner, who is currently touring with fellow Def Jux emcee Rob Sonic. The duo took the stage to a thundering applause and kicked right into high gear, starting the show with “Keep Off the Lawn” the first track off 2007’s None Shall Pass. This was the perfect song to start the show with. The crowd was singing along with the chorus and the guitar riff-laden hooks had heads nodding, even of those in the back. Much of the start of the show was dedicated to None Shall Pass as this is Aesop Rock’s most recent album. He continued with “Coffee,” my personal favorite of his whole catalogue, “Catacomb Kids” (complete with shouts out to New York and an ode to Slick Rick at the end of the song… “Knock ‘em out the box, Aes”), and “The Harbor Is Yours”.

The crowd was definitely getting involved during this portion of the show physically and verbally. Independent hip hop shows are very popular in this area (although the lack of diversity among the crowd, although prevalent at these types of shows all around the country, is almost laughable in San Diego). Aesop Rock also had a night-time set the opening night of Coachella this year, so he definitely gained some extra fans in the area recently.

After performing several songs off his newest album he started to get personal with the crowd and asked if everyone worked that day. I knew what was coming next since I had read E.N. May’s review of the Aesop Rock show in Washington, D.C. on this very Web site in late August. Just like he did at his show in the nation’s capital, he said almost verbatim the same story about manufacturing the stop-release buttons on buses and how that was his worst job. Although most in the crowd don’t know he did the same shtick at previous shows, it bugs me that an artist can’t come up with something original to relate to each crowd before each respective show. 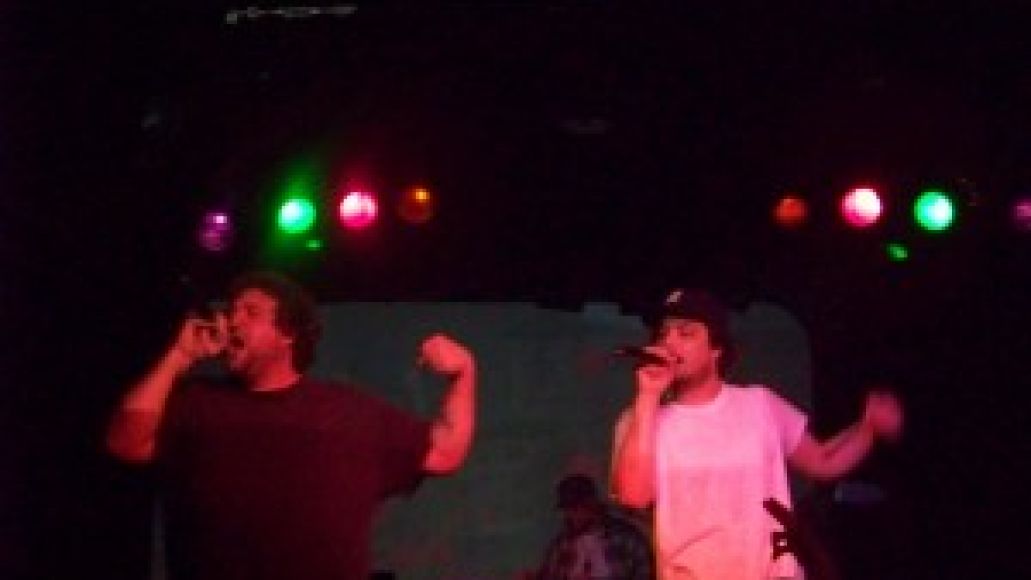 My annoyance quickly evaporated as Aesop launched into “Labor” off 2001’s Labor Days. This is one of his most dynamic songs and it came off great live and the crowd was going nuts. DJ Big Wiz was crafting a hypnotizing beat and even mixed in a break from the movie “9 to 5” while a picture of Dolly Parton flashed on the screen behind him. Other highlights included “Night Light,” another one of his best off the 2002 EP Daylight, “Daylight,” probably his most recognizable single off the same EP, “Getaway Car” and “Citronella” off None Shall Pass. In the latter song he had the crowd chanting “kill television!” and everyone seemed to really enjoy it. He finished his set with the title song “None Shall Pass” off his latest album and the crowd still reciprocated Aesop’s energy as if this was the first song of the set.

After leaving the stage, the fans were chanting his name and, of course, he came out for an encore in which he performed an improvised version of “Lucy.” After that, Aesop and Rob Sonic left the stage again and the crowd still hadn’t had enough so they came back out with members of Grayskul and Yak Ballz for a blazing freestyle that lasted more than 10 minutes. All the emcees looked like they were having fun and they were prodding each other during their verses. Aesop, at one point, freestyled the line “San Diego translates into whale’s vagina” which had me scratching my head and snickering at the same time. Aesop Rock is one of the most compelling and outrageous lyricists in hip hop and, truthfully, a lot of his lyrics go over my head, even though they sound great, along with the slick beats of the production on his work. Maybe the whale’s vagina thing was a metaphor for the war in Iraq. Or maybe he was just talking about a whale’s vagina. I guess I’ll never know.

Overall this was a great show and I was very impressed as this was my fist Aesop Rock live experience. He has one of the most unique voices in hip hop today and I thought his lyrics were very audible live, as opposed to some emcees who can’t keep their breath control once they leave the studio. I would have to say, however, that some of the distinctness of his voice, which makes him such a standout lyricist, in my opinion, was lost during his live show. 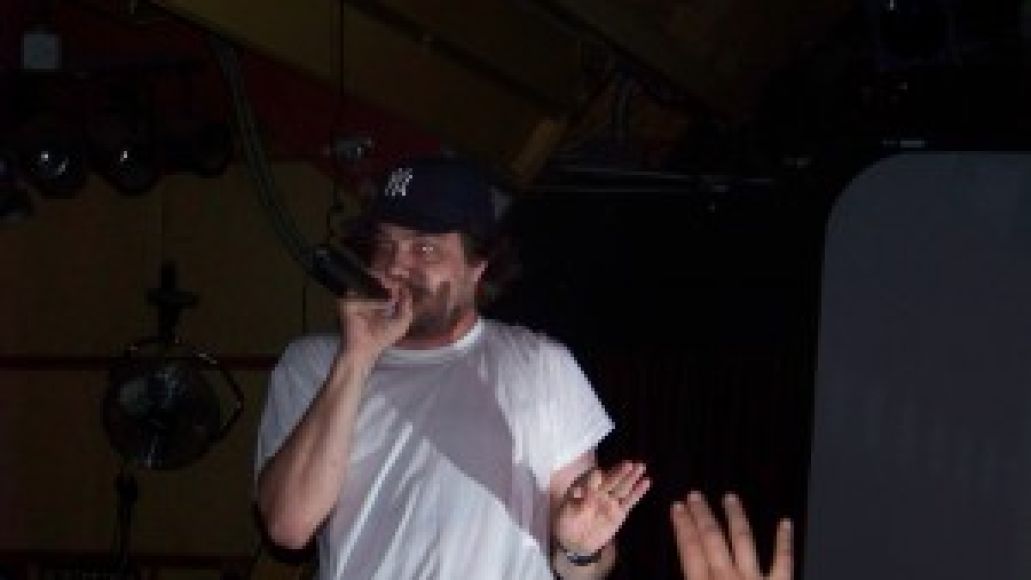 On one last note, Rob Sonic, who is joining Aesop throughout this tour, did a tremendous job and definitely held his own next to one of the best in the business. Many times a supporting rapper is there in a backup role and to play the cheerleader for the crowd. However, I would see him again if he came through town on his own, and I will seek out and become more familiar with his work. Also, DJ Big Wiz was incredible and his solo was a highlight of the show. I have been spoiled lately to see a lot of festival hip hop shows complete with live bands and sometime when it is just rappers and a DJ on stage I can get bored. However, a slick DJ can really make a show special and that was definitely the case on Wednesday night in Solana Beach.

Aesop Rock throws down at the Belly Up Tavern (9/17)