If you’re not familiar with Bumbershoot, let’s refresh your memory. Founded originally in 1971, as the city-funded “Mayor’s Arts Festival”, the Seattle, Washington-based music and arts festival has since evolved into one of the bigger events in the music world, now hosting 100,000+ attendees each and every Labor Day weekend. Of all places, the iconic Space Needle at the Seattle Center plays host to the festival. It’s currently a three-day festival, but each year they expand the artistic offerings. In addition to the many musical artists present, the festival highlights works from across the artistic spectrum including, but not limited to: comedy, performance art, graphic arts, poetry, creative writing and film. One would be hard pressed to come away from Bumbershoot 2008 feeling that there could have been more.

At first arrival, Bumbershoot can sometimes be a bit overwhelming, as it’s spread over 74 acres and has an attendance of roughly 50,000 each day. But once you settle in and realize that it will take time to get to the various stages and events, you’ll relax and have an amazing time. 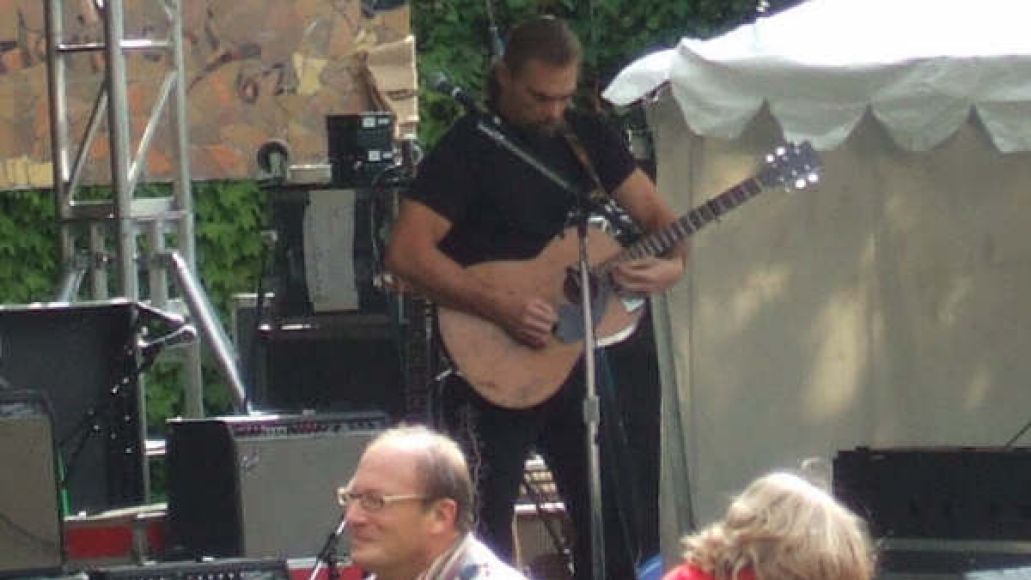 Opening up Saturday’s events, Rock-a-Billy artist Nick Vigarino added a jazz twist to his country sound by having a tenor saxaphone. As if to keep the sound consistent, Neko Case and Lucinda Williams maintained the alt-country sound. Unfortunately, many missed Case’s first song or two because security had yet to let people in for the performance. Not sure what was the problem, but the line moved quickly once it started. Case was fantastic as always playing mostly songs from her past album, Fox Confessor Brings the Flood; however, she managed to pull out a few new songs that will be on a future release. Whereas Case was very soothing, Williams was more rockin’ in her country-tinged, blues rock.  She played some new songs, which at times were corny (e.g. “Real Love”), but you can’t help but love her voice and instrumentation, especially for a woman of 55. Both Case and Williams’ new albums will be something to look forward to in the near future. 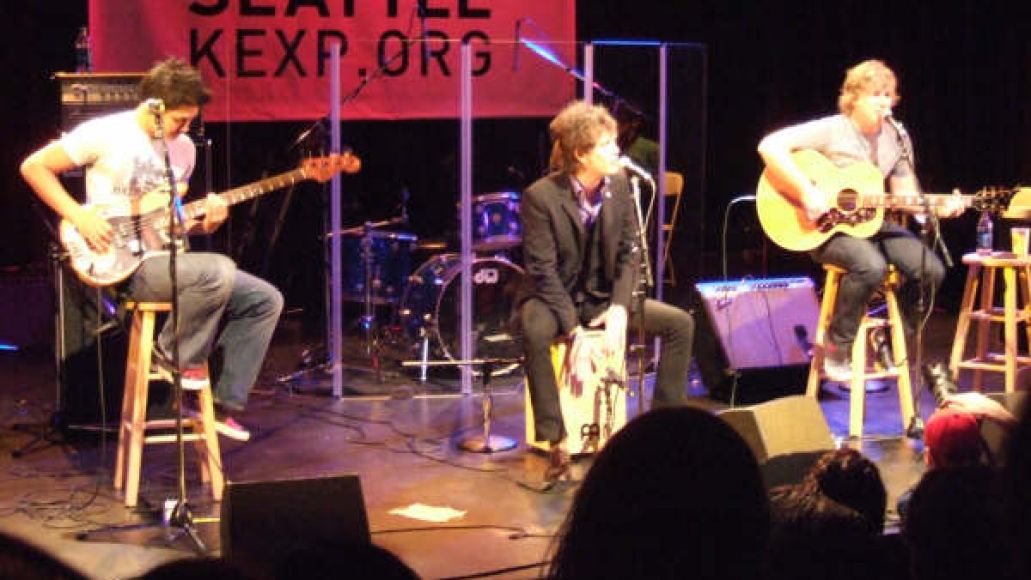 Local, listener-funded, radio station KEXP puts on several intimate shows each day in a secret location, with no more than 200 people admitted. The first was with Nada Surf. Unfortunately, bassist Daniel Lorca was injured, so he was replaced by Ozma bassist Jose Galvez, who did a fine job in Lorca’s absence. They played seven songs, all acoustic with Ira Elliot on the Cajon, a box-like drum that the musician sits on and hits with his palms. The highlight of the show was the boys playing “Amateur” from The Proximity Effect, a song that rarely shows up on their setlists. If you enjoy indie rock, this is a band you need to know.

As mentioned above, Bumbershoot is not all about the music. One of the few other events that took place at the festival was a comedy show, simply titled, “The MySpace Show.” This side show consisted of six comedians doing improv comedy on two real MySpace pages from random audience members. It was fun once things started rolling, though it did take awhile to find a few audience members who had their pages not set to private. 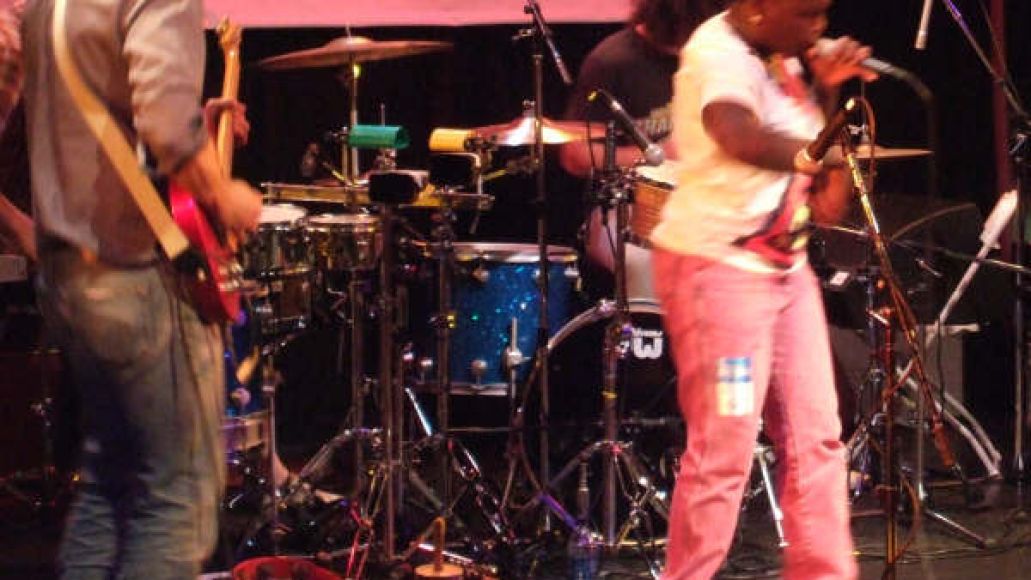 After the comedy show, and over at the KEXP Lounge, !!! (Chk, Chk, Chk) were billed to let us dance our asses off. Unfortunately, it was in a seated venue, so it was mostly head bobbing, but in any other setting it would have been a great dance party.  Despite this, the show was unreal, and !!! sounded great with some fantastic stage presence. If you’re into bands like Ghostland Observatory and The Ting Tings, you should check out !!!.

Finally, it was time for the best one-two punch of the festival: Band of Horses followed by Beck. Although some may disagree, Band of Horses is one of the best, if not the best, live indie rock act out today. Not only did they perform well, but most of the set list was culled from their first two 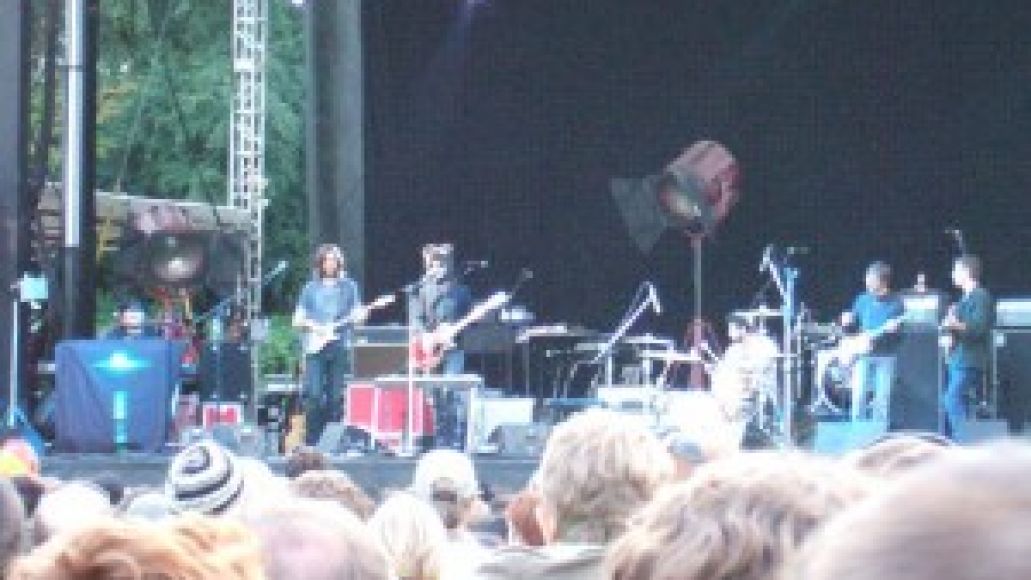 releases, plus two new songs to boot, one of which featured the harmonica and the other a melodica, best described as a woodwind keyboard.

Beck closed out the day with a killer “greatest hits” set. He started with “Loser” and continued through his catalogue. The only album they didn’t play from was Mutations, which was a bummer because it’s such a great album. However, the band did play “Nicotine and Gravy” off of Midnight Vultures, which was awesome. When he played “Hell Yes” and “Black Tambourine”, all five members of his band played 808 drum machines. Despite the amazing set list, the show did sound and feel a bit different. On the Guero/The Information tour, the slinky frontman kept himself busy with an elaborate puppet show, complete with dancers. Only this time, there was just a backing band, some large spot lights and a big screen made up of hundreds of bulbs. It was very minimalist, which is why it was so surprising that his sound was much less polished. It was almost grunge, actually. Nevertheless, you have to appreciate Beck for changing it up all the time. The guy is definitely a genius and should never be missed when he appears at a venue near you. 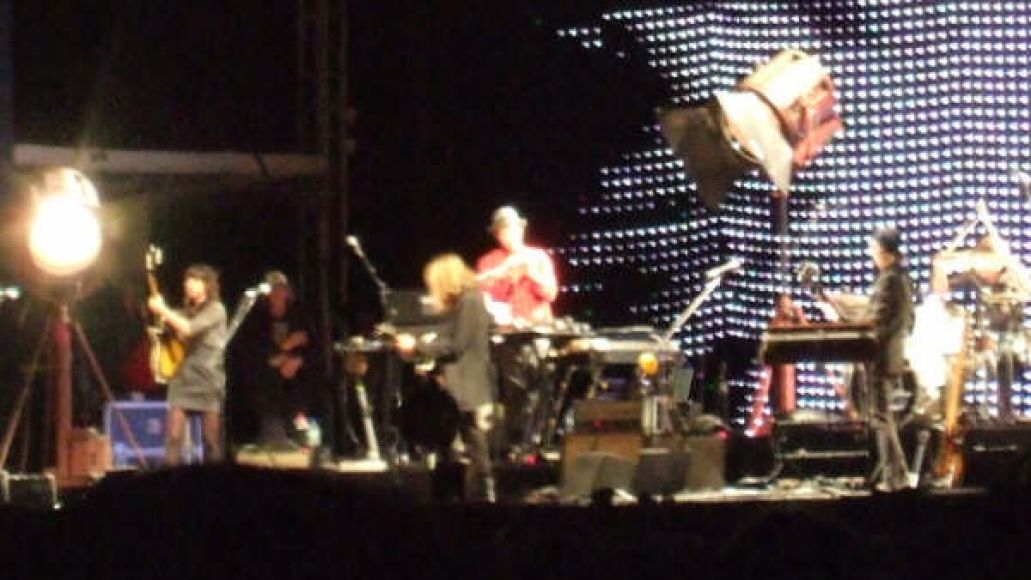 For some reason, Sunday was not nearly as jam packed with bands as Saturday or Sunday. Nonetheless, there were some great acts. Kicking off the proverbial sabbath, Lushy brought somewhat of a surf rock sound, only there were some undertones of jazz, too. Even with such a unique sound, it’s hard 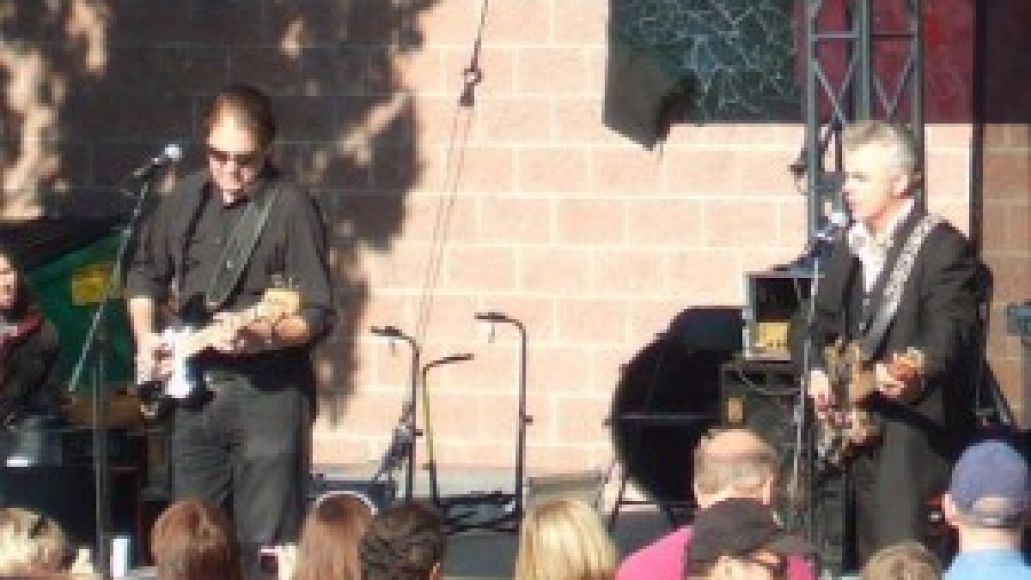 to hold the concertgoer’s attention when there’s also a vert ramp at the show. Yes, a vert ramp. With a combination of skaters and BMX bikers, the sight was pretty awe inspiring.

Following the vert ramp, there was a “Post-it Note Reading.” This was interesting, to say the least. At the reading, animation was drawn on Post-it notes, using a Sharpie, while a corresponding story was read. These light-hearted, humorous stories were a pleasant surprise. Following this, Dale Watson played his own unique style of Rock-a-billy, comparable to Johnny Cash. The only problem? The Whigs were starting up. The Whigs is a band with a fun, garage rock sound. Fun show aside, they’re a band you like, but not one that’s particularly memorable. 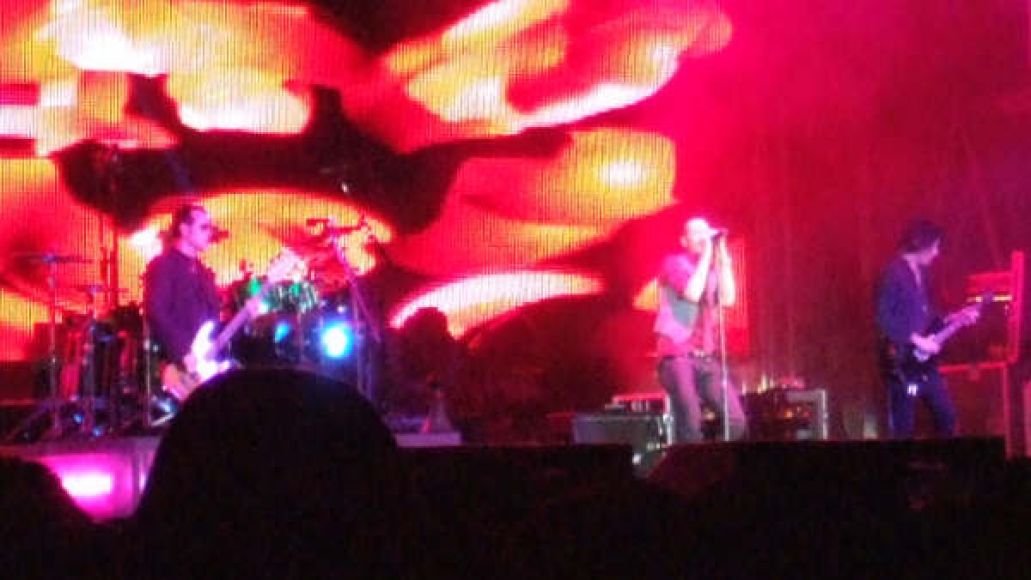 If Band of Horses and Beck were the best one-two punch of the festival, The Black Keys and Stone Temple Pilots (above, center) were a close second.  With crunch and huge riffs, The Black Keys’ bluesy rock is amazing, and it’s hard to believe that so much sound comes from only two guys on drums and guitar. Given Scott Weiland’s tumultuous past, you never know what to expect from 90’s rock outfit, Stone Temple Pilots; however, it turned out to be a rocking show. Thirty minutes past their scheduled set time, a tour bus drove right up to the stage and within minutes they were in front of thousands, blowing away any doubt that they could still rock. Hit after hit they rocked through a set which included a jazzy cover of Bob Marley’s “Redemption Song” on the outro of “Creep” and a plugged-in version of “Sour Girl.” It was one of the best arena rock shows in recent memory… and it wasn’t even in an arena.

The last day was the weakest of the three days, but still a great time. Local teen sensation Vince Mira started off the work week. Mira’s only claim to fame stems from a sound that’s uncannily like Johnny Cash. 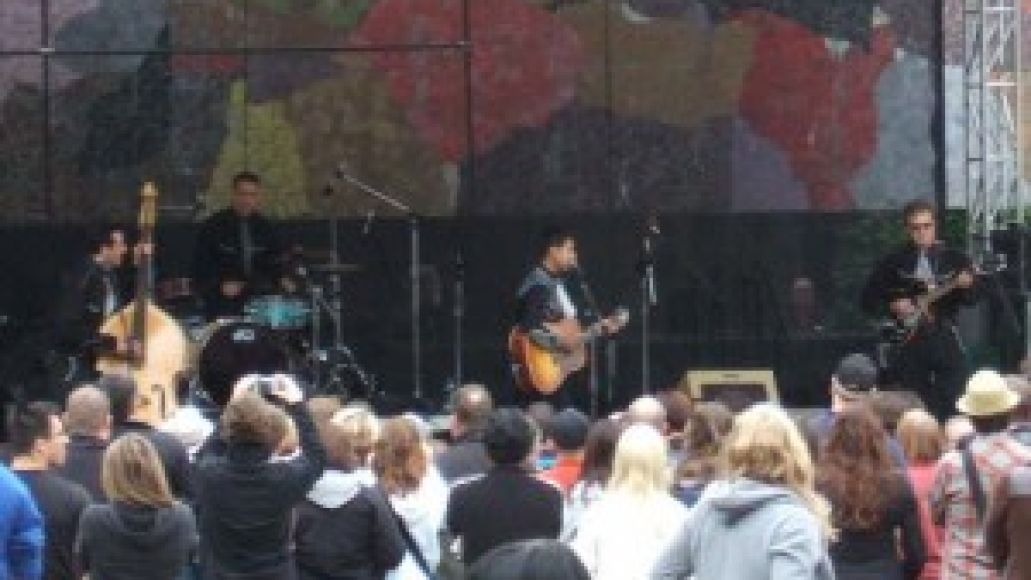 Saturday’s Dale Watson sounded like Johnny Cash too, but Vince Mira is Johnny Cash. It’s a bit eerie. This 15 year old, backed by The Roy Kay Trio, played mostly Cash’s hits, but also squeezed in a few of his own that were actually not bad. He may never be able to move beyond great impersonator, but there is no doubt he will always have an audience.

Keeping the local band theme going, Head Like a Kite, an electronic/new wave/rock group, were up next. Fronted by a guy who looked like a Jonas Brother, the band held a lil’ Flaming Lips flare, with some creatures dancing on the stage that looked all too much like the sugary candy, Nerds. It will be interesting to see how these young guys fare in the Seattle music market. Following shortly after was the much anticipated Israeli band, Monotonix. These guys put on a show similar to Gogol Bordello and they did not disappoint, even despite a very short set. It was very crowd heavy too, as you could not see them because they were not on the stage, but instead playing on the floor with the crowd surrounding them. All the while, lead singer Yomtov was continually crowd surfing both with and without a garbage can. Yes, he got inside a garbage can and was hoisted on top of the crowd. The guitar player then got in on the action and crowd surfed, too. Mind you, he was still playing all the while. After two, dirty garage rock songs an announcer came on stage and said that the show was being shut down. No explanation, but a reasonable guess would be due to safety. The crowd was not happy and began booing and flipping the poor guy off. Luckily, singer Yomtov came to his rescue and talked the crowd down. One can only imagine a full set by these guys, if it ever happens. 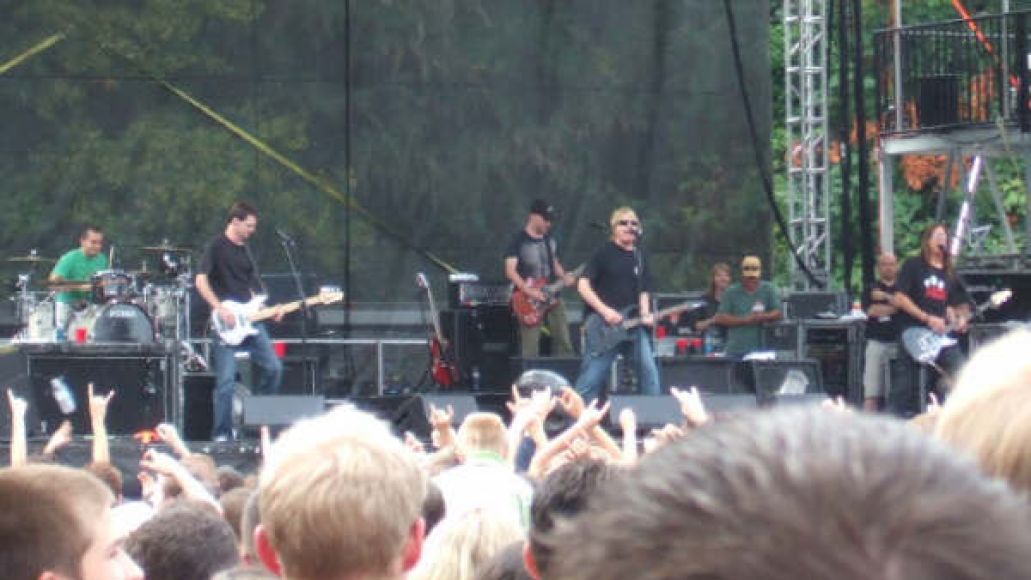 Bumbershoot this year, if you had not noticed, was full of 90’s acts and The Offspring were no exception. Like Stone Temple Pilots and Beck, they played a hits with a smattering of songs off of their new album Rise and Fall, Rage and Grace. As always, the band was fun to see and sounded great. The same can’t be said for the next act, X Levitation Cult, which was essentially a singer-songwriter who could neither sing nor write songs very well. 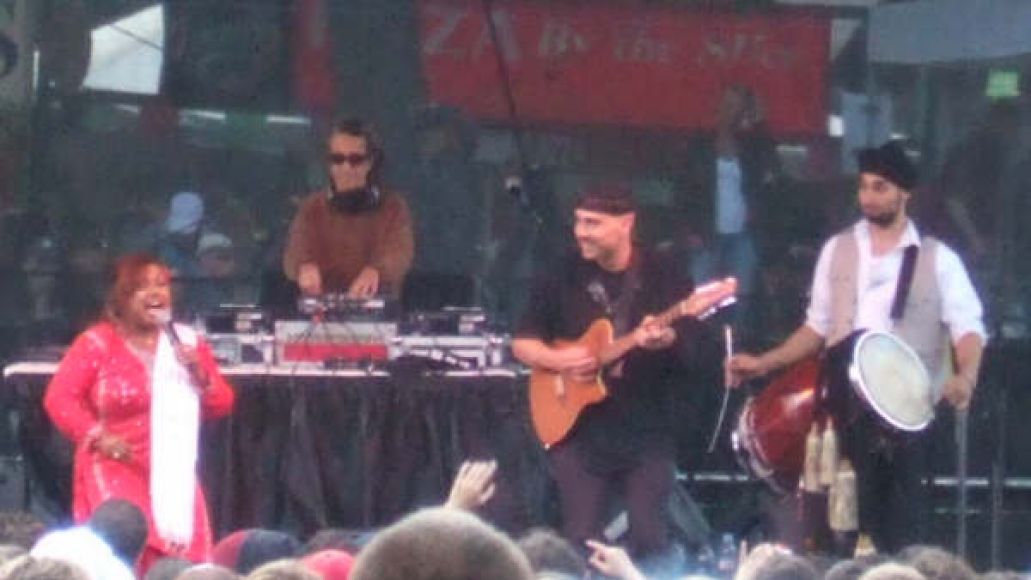 Bumbershoot is known for its diverse acts, but also for its diversity, and Cheb I Sabbah & 1002 Nights featuring Riffat Sultana is a great example of that. They consisted of a DJ, two percussionists, a singer (Riffat Sultana), a belly dancer and occasionally a Middle Eastern guitar. It was an interesting mix that was a entertaining, especially if one managed to snag a cold beer. Del tha Funky Homosapien sounded good, but Superchunk sounded excellent. Superchunk was probably one of the best surprises at the festival. They rocked hard with their brand of early 90’s indie rock, which still sounds contemporary. It was a good choice as Death Cab for Cutie came next, closing out the festival with a solid set. Now that they are a successful veteran band, it would be great to see them venture out a little and be more playful. Not much, just if they could add a cover or two, or play a song deep from its catalogue. You know, one that no one has heard live in years. Preferences aside, the Seattle indie group played well, predictable, but well. With a weekend like this was, it’s hard to complain. 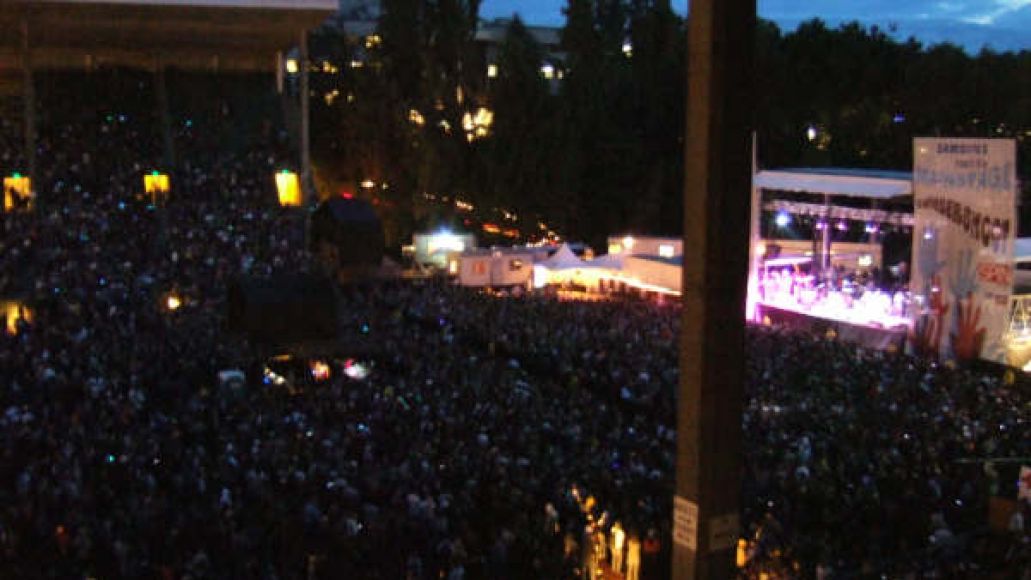 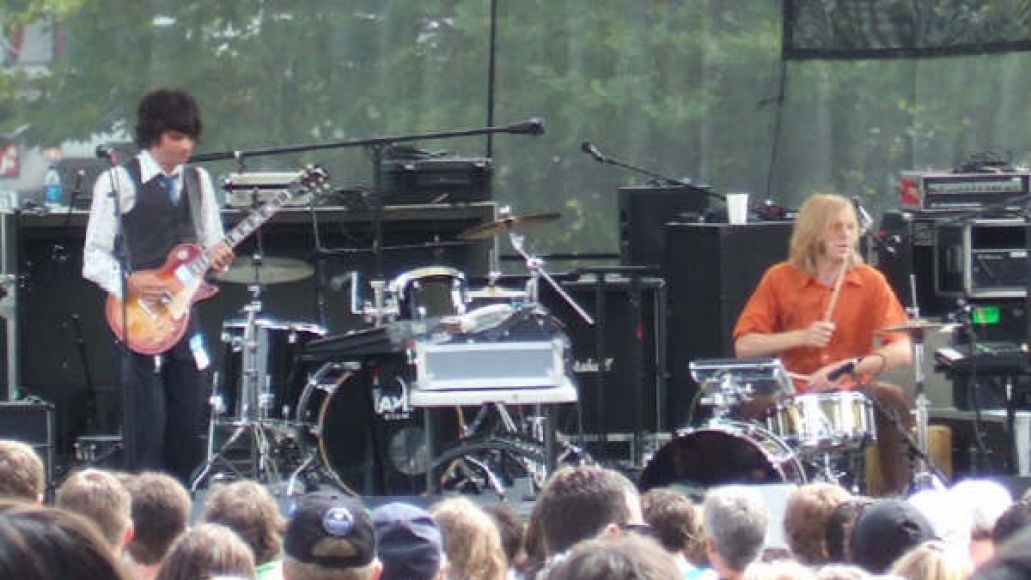 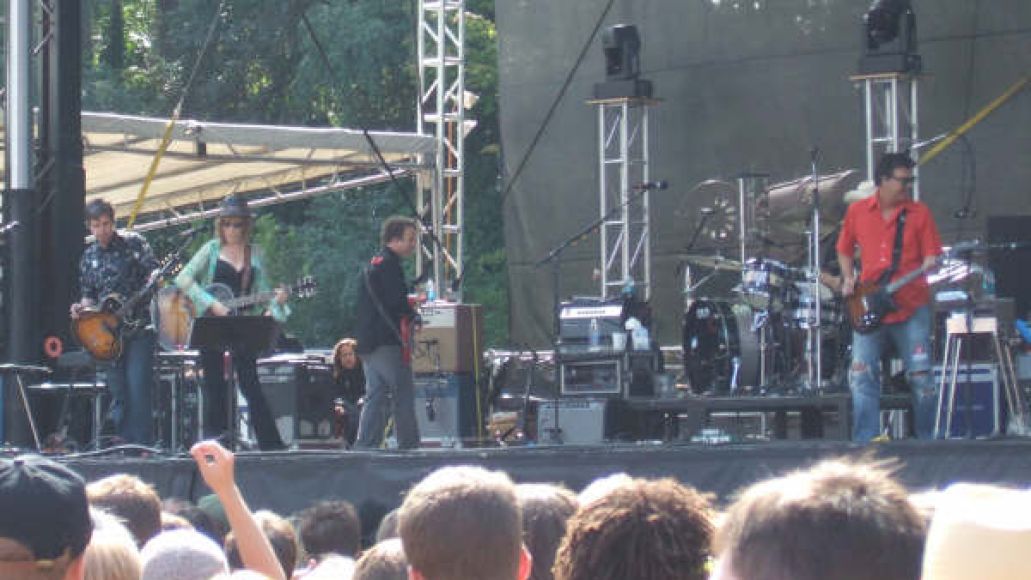 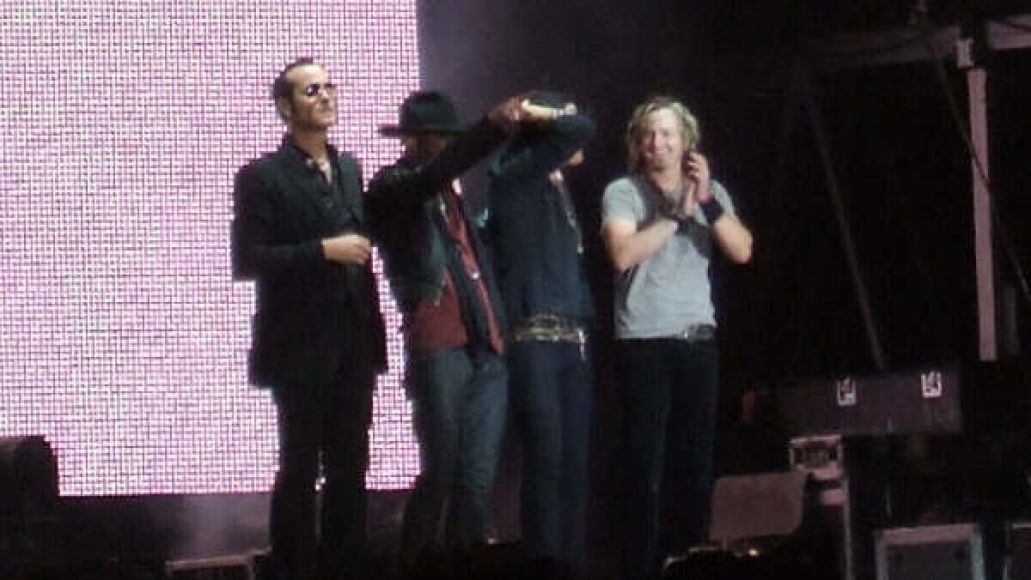