The seasons are changing in Vancouver, B.C., Canada. The sun will head into hibernation until April, the hockey season will start, and people will return to the indoors. I, for one, was not going to shy away from a chilly September night, opting to sneak in one more outdoor concert before the weather turns dreary. The warmth of Jack White’s blistering distorted solos warmed my blood at the Malkin Bowl this past Thursday, September 18, when The Raconteurs made its second visit to Vancouver of 2008.

Drawing  a much larger crowd than they did in April at The Commodore Ballroom, the fearsome garage outfit came out guns a blazing.The band’s reputation as a great live act and the success of its latest release, Consolers Of the Lonely, would explain the increase of fans at this particular appearance. Not only does Consolers Of the Lonely rock from start to finish, but it represents a complete band, a band that people are starting to notice, a band that’s more than just a one man show (as many might have stated upon Broken Boys Soldier‘s release). Although White stole the show with his immense talent, the band represented themselves well by staying tight and entertaining. 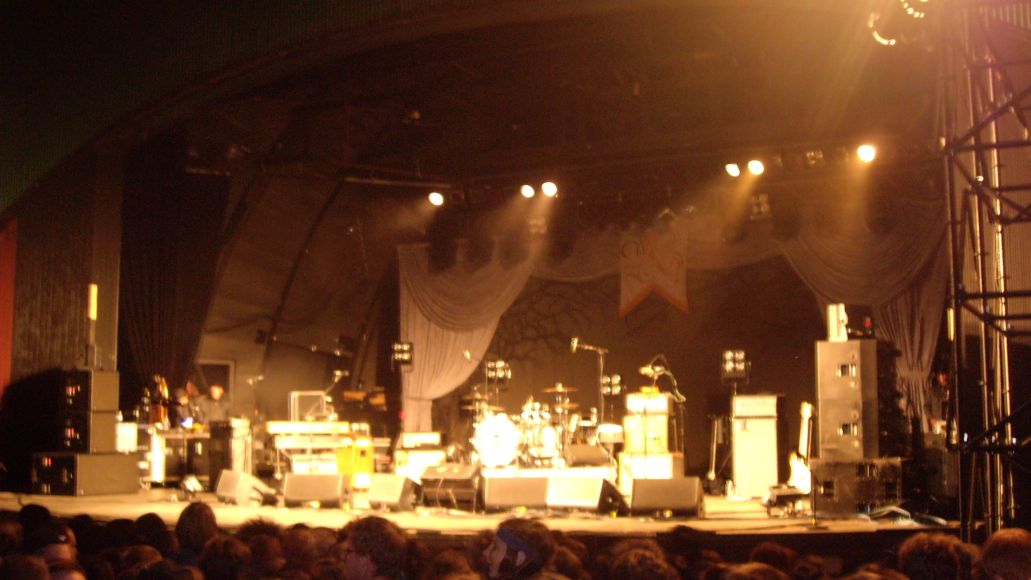 Opening with the fist pumping “Consolers Of the Lonely”, the band started off the show with thunder and lightning. Our group was very close to the front and for the first time in a while my ears had to adjust to the sound at a concert. Almost too loud at first, The Raconteurs began to find its groove when White calmed everyone down with the blues of ” Blue Vein” and sitting at the piano for “You Don’t Understand Me”. From the outset, White displayed an uncanny stage presence, which lead me to neglect the skills of the other band members at certain points of the show. Standing in at over 6 foot and swinging his massive JB Hutto Montgomery Airline guitar around like a medieval battle axe, White was dressed in plaid slacks similar to Bill the Butcher’s in Gangs of New York. After only seeing the elusive frontman in photos and videos, I was expecting him to be a frail short man; however, his massive stature only added to his already dominating presence.

By the time “The Switch and the Spur” was being played, the entire crowd was in awe at the amount of musical skill they were being treated to for only $50.00. White and Brendan Benson typically share lead singing duties, yet Benson’s voice seemed to be a bit off this night. White was dominant on the mic, spitting out venomous blues lines and matching the distortion of his guitar with the shriek of his voice. The track which stood out vocally for all involved was the popular hit, ” Steady, As She Goes”. Oddly enough the band unleashed the past hit single mid-set. Expecting it to come in the encore, I still found this song to be one of the strongest in the entire set. Other stand outs were “Many Shades Of Black”, “Broken Boy Soldier”, and “Rich Kids Blues”.

While Benson was experiencing an off night, drummer Patrick Keeler was soaking up the spotlight. Keeler, playing in a rarely seen traditional drummer’s grip, kept his snare tight and his cymbals splashy. White and Keeler played with a strong connection, often facing each other and jamming along. Keeler’s long time friend and Raconteurs bassist Jack Lawrence kept pretty quiet throughout the entire night. Other than his odd appearance, there is not much to report on Lawrence. He wields a strong bass and his past experience with Keeler, playing together in The Greenhornes since 1996, certainly shows. These two kept the pace so White could unleash his fury into the Vancouver night, a job well done by a strong rhythm section. After a quick break the boys returned for  a strong encore featuring: “Hands,” “Salute Your Salution”, and “Carolina Drama”. 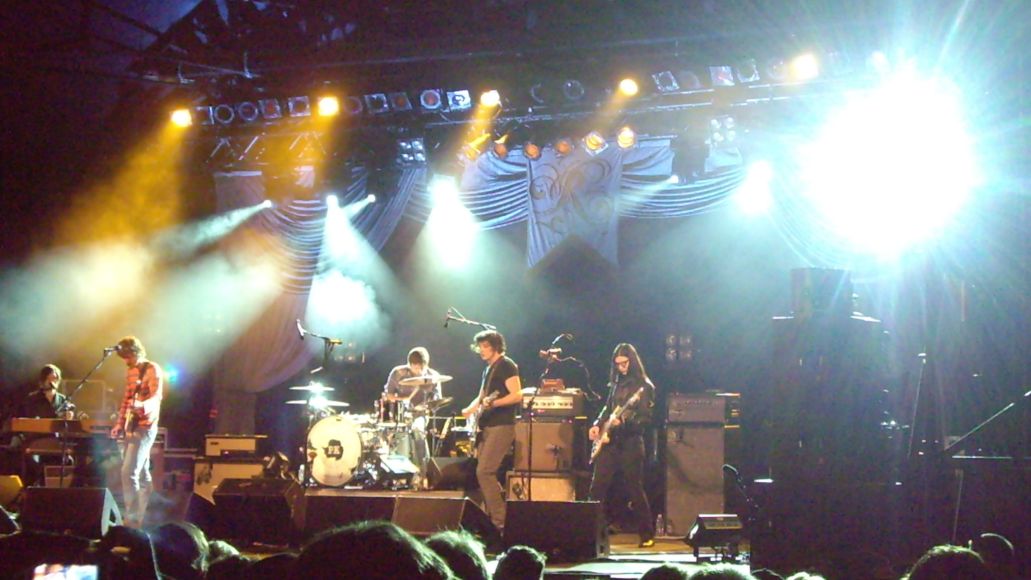 Even though The Raconteurs did disappear a little early, the set was approxiamately an hour and twenty minutes long. I left the Malkin Bowl entirely satisfied. Witnessing the power of White’s guitar and voice is something I will never forget. Even after countless shows with The White Stripes and the recent success of The Raconteurs, White is still finding different ways to improve his musical ability. While this was my first encounter with White, one only needs to compare the two Raconteurs albums. Both albums are impressive but White’s range is definitely larger on Consolers and from the audience reaction at the Malkin Bowl this past week, one could suggest that White and The Raconteurs will only get better with age.

The Raconteurs sweep up Vancouver (9/18)