Halloween, at least in part, belongs to Richard O’Brien, as does the midnight hour with which we’ve come to associate all things frightening, macabre, and sexually taboo. O’Brien, 66, is the revered creator of The Rocky Horror Picture Show, a stage musical and cult film that fuses together the unlikely triumvirate of science fiction, cross-dressing, and rock & roll. And for nearly thirty-five years, fans of all ages and from all walks of life have stolen away to movie theaters in the wee hours of the night—dressed (or cross-dressed) as Brad, Janet, Frank-N-Furter, and Riff-Raff—to participate in this late-night, cult phenomenon.

But you knew that, didn’t you? And Miscellaneous Masterpieces isn’t about rehashing what we already know. It’s about sharing the goodies you might have missed. So, for Halloween, I’d like to…if I may…take you on yet another strange journey into the creative, musical mind of Richard O’Brien. Set aside the lips and fishnets for a moment, and make room for two brilliant albums of fun and naughtiness that you might have missed: Shock Treatment & Absolute O’Brien.

However, if you do need your Rocky fix this Halloween (as well you should), pick up the 1974 live version starring Tim Curry and the Original Roxy Cast, and give yourself over to absolute pleasure…

Shock Treatment, originally titled The Brad and Janet Show, was intended to be the proper cinematic sequel to the RHPS, but casting issues and scripting problems left O’Brien in a mad scramble to piece together a coherent, new adventure for his hero and heroine. The result is a story of sibling revenge that takes place entirely in a television studio, where real life and primetime television become a 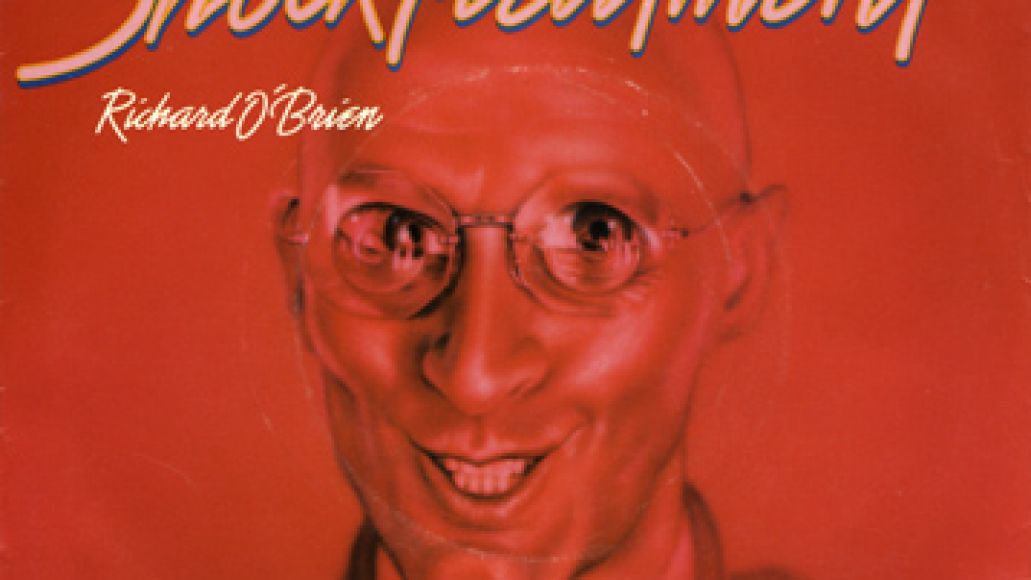 seamless blur. (Talk about being ahead of the game by a couple decades!) While Shock Treatment never developed the same devoted following as the RHPS, some fans argue that the film’s rocking soundtrack is actually superior to its red-lipped predecessor.

Part of Shock Treatment’s appeal is O’Brien’s spoofing of small town America—a nauseatingly wholesome exterior (Ike would have been proud…) with a dark, secretive underbelly. The lyrical satire is razor sharp from the soundtrack’s opening line “You’ll find happy hearts and smiling faces/And tolerance for the ethnic races…” “Bitchin’ in the Kitchen” features Brad and Janet relating their marriage troubles through products advertised during a commercial break. “Dear blender, won’t you help a first offender/Oh, toaster, don’t you put the burn on me/Refrigerator, why are we always sooner or later/Bitchin’ in the kitchen or crying in the bedroom all night?” “Thank God I’m a Man” is a hilarious take-off on modern machismo (i.e., tools, cars, and male chauvinism) and ends with the appropriate line “Faggots are maggots/Thank God I’m a man.”

And when O’Brien isn’t poking fun at the house-with-a-white-picket-fence lifestyle, he’s dishing up rock songs as catchy as anything you’ll find in Rocky, many of which deal with similar subject matter: sex, insanity, and personal freedom. “Little Black Dress” is a sexy rocker about a minimal, criminal, backless, strapless, classical, little black dress, and O’Brien’s eccentric vocal delivery drives it home. And it’s his lead vocals throughout Shock Treatment that make the songs work so well. No longer in the shadow of Tim Curry’s powerhouse rock & roll voice, O’Brien is able to take center stage with his much less traditional delivery, and it fits the songs perfectly. “Shock Treatment” is a prime example. The combination of O’Brien’s creepy, almost-spoken verses and his high-pitched delivery on choruses gives the film the appropriate vibe of lunatics running the asylum. And O’Brien singing, “Get you jumpin’ like a real live wire” is pure ear candy. “Look What I Did to My Id” once again demonstrates that O’Brien knows how to rock with a brass section, and the song revisits its creator’s motto of Be it, Don’t dream it. This song includes my favorite lines “When Heaven’s in the music/Hell is in control/The angels got the voices/But the Devil’s got the rock & roll.” This idea seems to be at the heart of everything O’Brien does. If being wrong feels so right, then maybe it ain’t all that wrong after all. And even if it is, it can be a lot more fun.

Shock Treatment isn’t Rocky, but it doesn’t try or need to be. It has its own unique brand of perversion and insanity packed into some of the catchiest rock songs you’ll hear.

In the mid-nineties, Richard O’Brien wrote and performed a one-man, rock & roll show called Disgracefully Yours. His character, Mephistopheles Smith, is a demonic spokesperson and head recruiter for a new and improved Hell—the idea being that at the very least humans should consider the perks of eternal hellfire before making a 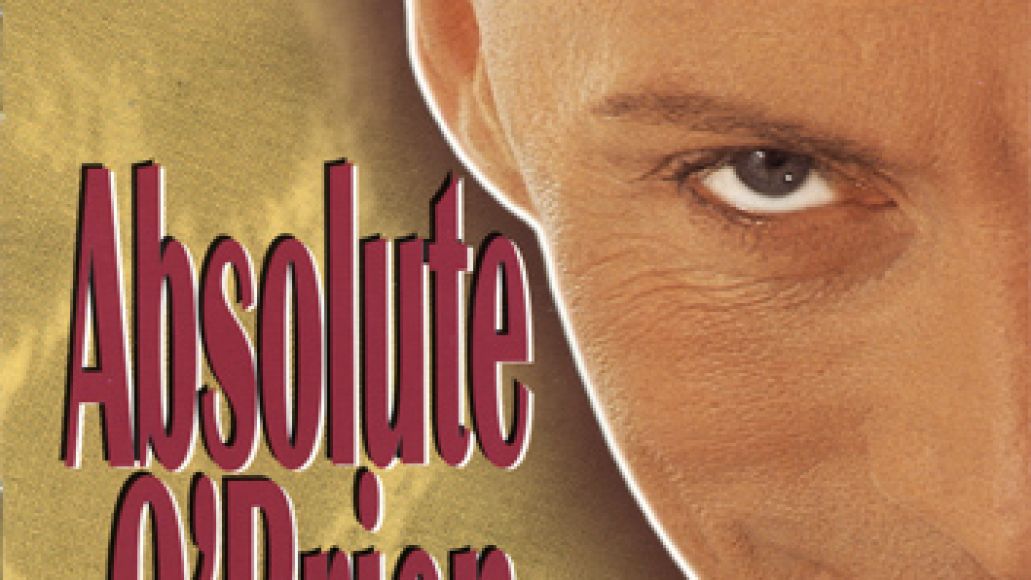 choice in afterlives. (Think Satan doing a Vegas lounge act.) A few years later, O’Brien decided to put out his first proper solo album, Absolute O’Brien, and pulled the bulk of the record’s songs from Disgracefully Yours.

Most fans go into Absolute O’Brien expecting Rocky rock & roll and are disappointed to find almost absolutely none of the straightforward rock that made O’Brien famous. Instead, we get a seductive set of jazz rock songs. Brad and Janet’s encounter in Rocky might be the thing of nightmares, but the songs on Absolute O’Brien possess a somnambulistic quality, capturing the subtle ambiguity and eeriness that emerges in a dark room when you’re between awake and asleep. These songs are both quiet and rocking, and O’Brien’s unique voice haunts and hovers in the spaces between acoustic guitars, keyboards, and saxophones, giving the record an ethereal and dreamlike quality.

“Incubus of Love” and “Angel in Me” are jazz songs that begin bare only to soar later on with O’Brien’s crooning beautifully accompanied by lush sax lines. “It’s up to You” comes directly out of left field, driven by Spanish guitars and harmonica. “Better shoot for what suits you/When you cash in your chips,” sings O’Brien, returning to the Disgracefully Yours idea of choosing one’s eternal destiny. “Ain’t that to Die For” is a bouncy rock song with a similar theme and further examples of O’Brien’s sharp lyrical wit. “The quick of us pick Icarus/As a stinker of a pilot/But anyone that near the sun/Ain’t no shrinking violet.” “I’ve Been There Before” and “Running with the Noisy Boys” are as close as O’Brien comes to Rocky, the latter sounding like it could be off a Clash or early Elvis Costello album. The best song, though, might be “Rhythm of the Heartbeat”, a perfect mix of the album’s jazz vibe, O’Brien’s classic rock, and his eternal message of letting one’s heart be one’s guide.

Absolute O’Brien demonstrates Richard O’Brien’s range as a singer and songwriter and makes me wish he hadn’t waited until his fifties to put out his first album. It’s gorgeous and sweet and lulls the listener into feeling secure…and then comes a dark and seductive voice whispering in your ear. Rock packed in a whisper? Yeah, that’s how this album strikes me. As O’Brien sings in “Incubus of Love”, “I’m going to come for you like a thief in the night time/I’m going to creep up to your side.”