The last time Guns N’ Roses released an album’s worth of original material, River Phoenix was still acting, Kurt Cobain wasn’t a household name yet, and Jurassic Park was just a novel. Things have changed, to say the least, and while nearly 18 years have passed since Use Your Illusion I & II, the fan base for the former ’80s outfit is still as strong as ever. Twenty and thirty somethings still wear their faded “GNR” shirts, while teenagers flock to Hot Topic and buy belt buckles, pins, and patches with the infamous logo, and with the advent of Guitar Hero, anyone and everyone under the age of 15 are falling in love with “Welcome to the Jungle” or “Sweet Child of Mine”, opening up a world of opportunities for the legendary band.

So, to say that an album like Chinese Democracy, the nearly two decade spanning project of one W. Axl Rose, is irrelevant would be an absolute lie. If anything, there hasn’t been a better time to release this record. Given that Rose is the only original member left (aside from Dizzy Reed, who played on both Use Your Illusion‘s), this album needed the mounting hype that has developed. After all, had it been released sometime in the late ’90s, as it was originally intended, everyone would have scratched their heads and wondered why the same band responsible for Appetite for Destruction was channeling NIN. They still might be doing that today, but at least there’s some preemptive knowledge of it.

There’s a history lesson here that will always overshadow this release, but let’s save that for another time. Fourteen tracks on this album merit an analysis rather than a backward gossip column on the understated drama and chaos that surround ’em. In other words, let’s take an objective look at this musically, and leave the behind the scenes drama for VH1. They need to update the band’s Behind the Music episode anyhow.

By now everyone has heard the titular track which opens Chinese Democracy. It’s a perfect opener, and one that knocks down one wall after another. There are the subtle sirens and Chinese banter at the beginning that create an ethereal mood, all of which is shattered as a heart beat rhythm kicks off what is more or less a throwback speed metal drive. Rose is a bit political here, going insofar as to reference the Falun Gong, and there’s an angry rasp in his voice. It’s different, of course, but the speed metal solo towards the end still rings classic GN’R and that should be enough. Next up, “Shackler’s Revenge” keeps it in the digitized realm, only now there’s this decadent dance swing to it. The sludge rock verses may require an adjustment, but the pre-chorus (“Don’t ever try to tell me how much you care for me”) is bouncy and fun, which all lead up to an anthemic chorus (“I don’t believe there’s a reason”) that will have everyone’s fists in the air.

The following two songs are essentially the heart of the album. “Better” is the “hit” that everyone’s been lost on, while “Street of Dreams” is the ballad for those tired of wasting a buck at the jukebox for “November Rain.” The former starts with Rose whispering, “No one ever told me when I was alone,” over a whining guitar line that bubbles and bursts. Anyone who’s ever doubted this current line up should listen to this song. It’s brutal, honest, and aggressive. Rose sings with a cadence that’s uncanny, and he hasn’t sounded this youthful and bittersweet since 1987’s “Sweet Child of Mine”. When guitarist Robin Finck wails at 3:43, there’s this feeling that screams, “They’re back,” even if “they” aren’t. With “Street of Dreams”, Rose begins at the piano, channeling some Sir Elton John, only it’s more forward. The melody is bouncy, think Use Your Illusion I‘s “The Garden”, and Rose hits some personal tones (“So now I wander through my days/ Trying to find my ways”), opening some doors that have been closed for much too long.

Then the album starts to meander. That’s not necessarily a bad thing, but it’s something to note. “If The World” has this grandiose 007-like manner with its flamencos, wah pedal guitar, and synth sounds. At five minutes, Rose spends a great deal of time discussing the end of the world and shattered dreams in a monotonous relay. One wonders if these lyrics allude to his former love, Stephanie Seymour. Though that assumption is solidified with the sprawling, multi-layered epic that is “There Was A Time”. Between electronic beats, violins, multi-synths, distorted and clean guitars, this baby is jam packed. Thanks to Buckethead’s original work, the focus here is all guitar. Throughout the nearly seven minute opus, the lead guitar bends, squeals, and shakes. It’s one of the most impressive solos in the past decade, and while that’s quite the statement, it’s true. Rose himself has some fun, too. When he’s not chanting, “There was a time…”, he’s reminiscing on “broken glass and cigarettes,” “doctors and lawyers,” and being the “one who took the fall.” Sound familiar? Just take a gander at the ol’ tabloids of the ’90s.

So many have pegged the Brian May-influenced “Catcher In The Rye” as cheesy or filler, but that’s just not the case. The lyrics aren’t anything to write home about, save for the fun line (“If I thought that I was crazy/Well I guess I’d have more fun”), but the melody is everything this band stood for at one time. The ending bridge is also heartwarming, with the solo dancing around Rose’s lil’ shuffle (“On an ordinary day/ Back in an ordinary way”). Unfortunately, it’s back to the industrial stuff. “Scraped” feels confused, with Rose tirelessly out front, crooning, “Don’t you try to stop us now!” Only one’s lost as to who he’s referring to, and by now the luster in the digitized solo work is wearing thin. It’s a fast shuffle, but improved upon with the follow up, “Rhiad N’ The Bedouins.” Here, the riffs are thrown left and right again, but it’s more focused, and the lyrics are more intriguing, as Rose continues to embody his own romanticism (“Caught in the lies/No one I love is there”) and spiral into self deprecation (“Somewhere in time/People will like me there”). Fans of “You Could Be Mine” (off of Use Your Illusion II) will find solace here.

Then things get ugly. “Sorry”, which features Rose’s partner in crime, Sebastian Bach, isn’t the “doom metal” burner that had been hyped before. It’s slow, it panders on, and yet it’s somehow repetitive too. Rose sounds great, but the overall product isn’t that interesting, and it’s not catchy in the slightest. Then there’s “I.R.S”, a song that leaked nearly half a decade ago. This track received a lot of attention upon first listen, but with a cheesy chorus (“Gonna call the President/ Gonna call myself a Private Eye/ Gonna need the IRS/Gonna get the FBI”) and an impotent guitar line, this one’s a dud. The same could be said for “Madagascar”, quite possibly the weakest song put out by the band. This slow thinker doesn’t know what it wants to be. As Rose lays out this existential ballad, he can’t stop crooning. At one part, he sounds as thick as molasses, with harmonies rolling off his tongue like a tanker truck sporting a flat. Oh, and were the sound clips of Martin Luther King, Jr. and Cool Hand Luke really necessary? Maybe in 1999, when bands like Limp Bizkit sampled freely, but in today’s standards it just comes off as cheap and unnecessary. It doesn’t help that all this goes on for six minutes, either.

But, what’s this? The album turns a new leaf. On “This I Love”, Rose returns to the piano, reeling back again on what can only be his lingering infatuation with Seymour, especially when he cries out, “So if she’s somewhere near me/I hope to God she hears me.” It’s a passionate affair here, quite possibly the album’s peak, and Rose sounds earnest and hurt. What’s interesting is that while this ballad is a throwback to the Use Your Illusion days (surely fans will peg this the follow up to “November Rain” and “Estranged”), it carries this modern fashion that’s consistent with the rest of the album. This style continues with the album’s closing power ballad, “Prostitute”. Some might roll their eyes or laugh, but this glossy driver is a great song. It’s heavy, but not too heavy. There’s the piano, a thumbing percussion, and Rose, who sounds exceptional in the album’s final moments. Think Bruce Hornsby on distortion, if that’s even possible. It’s a fitting closer, given the album’s thematic elements, and strong enough to leave listeners, both old and new, wanting more.

So, there you have it. After all this time, Chinese Democracy will sleep comfortably next to Appetite, Lies, the Illusions, and… shudder to think… The Spaghetti Incident. The question on everyone’s mind is, “Was it worth it?” That depends really. For those that have waited patiently next to their computer, their hands in bags of chips while debating whether “The Blues” should be the first or third single, crossing their fingers in hope of seeing “The General” on the album, and wondering if Brian “The Brain” Mantia will be back, this is a release of orgasmic proportions. However, for the casual Guns N’ Roses fan or the general public, this is a very solid modern rock release, especially given the stale, stale genre as of late. Does it have its flaws? Of course, but try and find another modern rock record today that’s as exciting and ambitious as this one.

Essential Tracks: “Better, “There Was a Time”, and “Catcher in the Rye”

Pick up a copy of Chinese Democracy here… 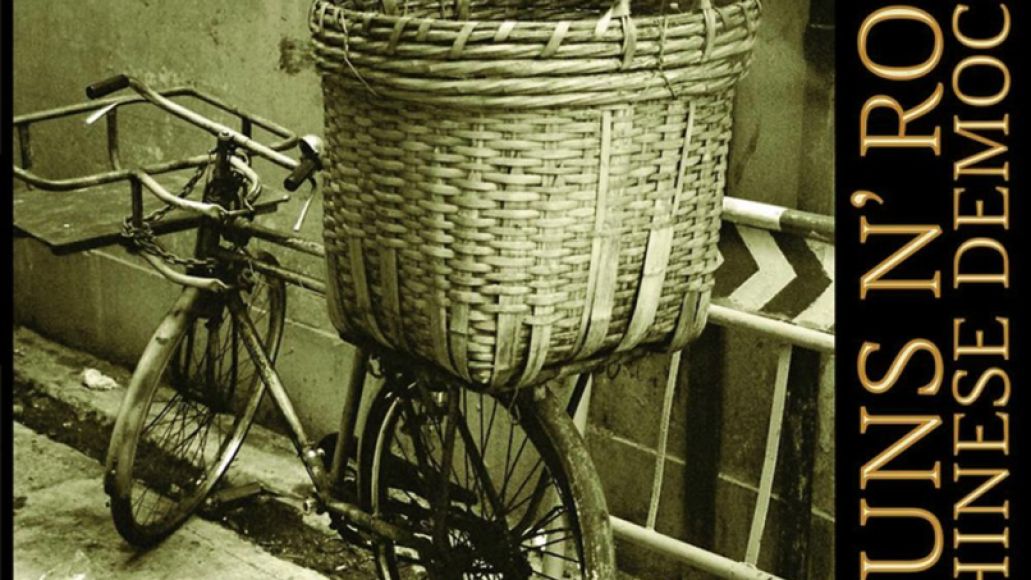