Almost eight years to the day they left, the Smashing Pumpkins finally returned to Chicago. In the first of two nights at the classy and intimate Chicago Theatre, with two more scheduled at the Auditorium later this week, fans came in truckloads, piling far and wide under the bright lights and encompassing billboard. Some wore black and white striped shirts, an homage to the bald frontman’s typical attire, while most were hidden behind snow jackets–despite being a relatively cool night. Everyone had RSVP’d to the band’s twentieth birthday bash.

“Billy Corgan said it’s not about where we’ve been, but where we’re at now,” read the WXRT host, who introduced the former Chicago act with joy and merit. It was an exciting time for everyone, especially those running on in with beers and popcorn, who were surprised that there wasn’t a supporting act. When the lights fell down, the Pumpkins were treated to what was probably their most raucous and vivacious crowd yet. Beneath the murky blues and blacks, each of the five members crept towards the dimly lit stage. Guitarist Jeff Schroeder came first, followed by keyboardist Lisa Harriton, the boyish drummer that is always Jimmy Chamberlin, and bassist Ginger Pooley (formerly Reyes). At this point, the applause was deafening, it couldn’t possibly get any louder. 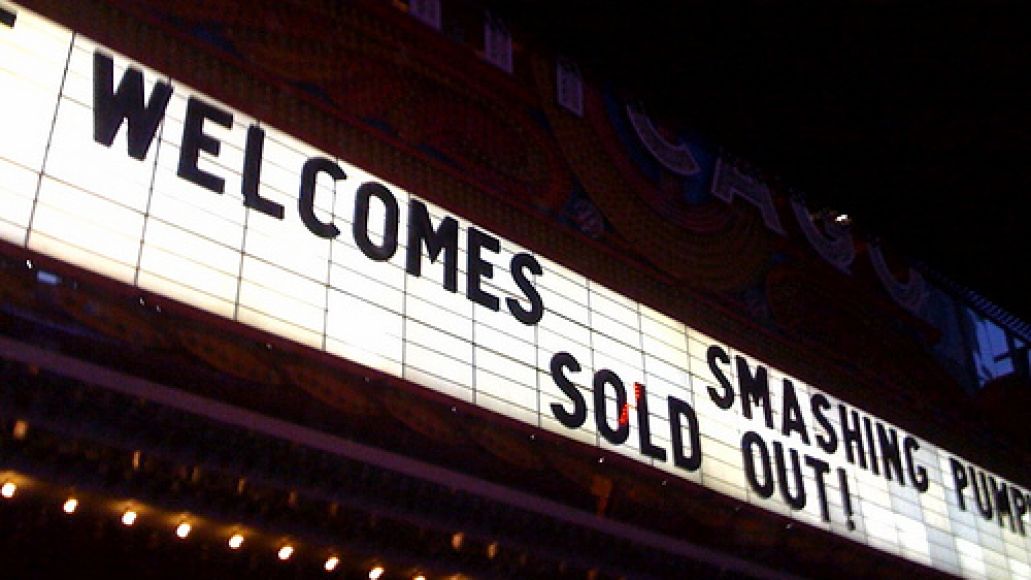 Of course, that wasn’t the case when the band’s leader and dictator, Billy Corgan, came out. With his head under a golden crown and his slender frame amassed with a puffy dress, he walked rather cautiously to the microphone, as the band started with the surf rocker number “Roctopus” which segued into “Everybody Clap Their Hands.” It was funny, but the audience hadn’t a clue what they were getting themselves into. Quickly and on target, the fearsome five snapped up newer hits “Tarantula” and “G.L.O.W.” These were played with such adrenaline and they were so sharp that it’s clear the rigorous practice sessions this band goes through, at the request of Corgan, really do pay off. The harmonies are spot on, the riffs are sequential yet freeform, and the pacing is remarkable.

The energy continued with a rage induced performance of “Siva”, a treat off the band’s debut, Gish. Originally a four minute and so-so song, last night’s cut went on for a good seven to eight minutes. With pauses, extended solos, and scattered drum fills, it was one of the better moments in the off-kilt set. The audience responded by throwing their fists and the air and singing along. This would continue with former hits “Mayonaise” and “Tonight, Tonight.” The former, a Siamese Dream fan favorite, saw the most interaction from the crowd that night, other than the stage banter that would come later, and the latter kept everyone happy, in addition to being blind from the erratic spotlights. 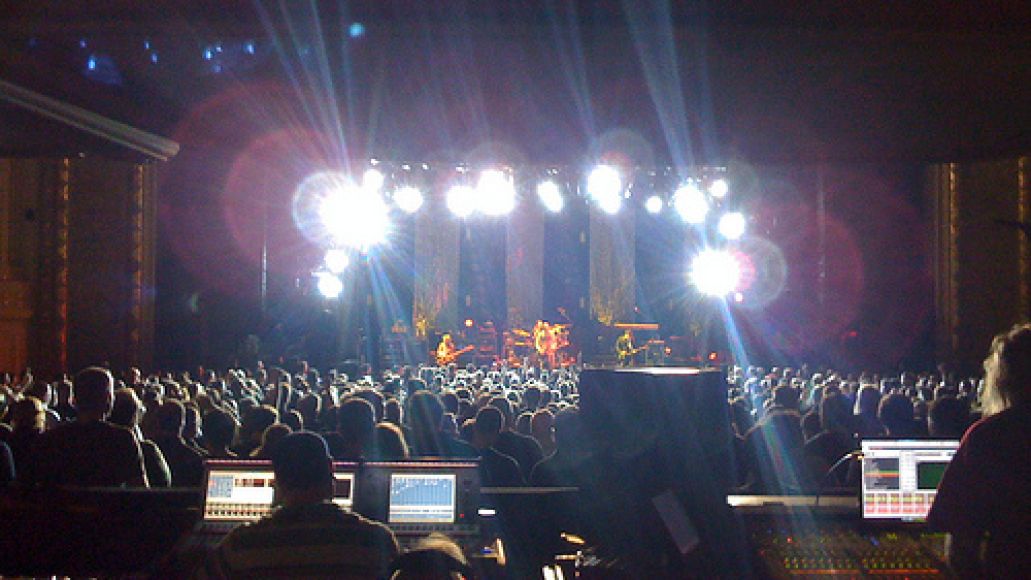 “Speed Kills” was interesting, but hardly any fans knew what they were playing, most likely because it’s from an album that was “technically” never released to the public. It’s kind of amusing that Corgan continues to cull set’s material from Machina II/The Friends & Enemies of Modern Music. Last year’s Zeitgeist tour was stocked with the album’s material, and the same can be said of this year’s tour, as well. Perhaps he feels he never had a proper tour for the rare gem, which in that case, he should be dusting off “Let Me Give The World To You” or the rather fitting, “Home” (at least for the Chicago dates).

Then, of course, came the “jams.” One after another they hit in succession, further derailing an audience that had come in with spirits that were initially juvenile-like. “Transformer” kicked things up a notch (“She’s a South Side Transformer!”), as did “Superchrist”, and of course, the ten minute opus, “United States.” This took up a good thirty minutes of the set, which saw most patrons tending to the beer gardens and what have you outside. When Chamberlin set down his drum sticks to rest, Corgan announced to the mildly entertained crowd, “Well, that sums up the first part of the show. Thank you very much!” He could tell the crowd’s reactions and quickly noted, “You sound like the crowds here at the end of the Cubs season.” When that brought up everyone’s attention, he digressed on Chicago women, going over their qualifications such as how “they have to be fun”, they have to have a “nice rear end”, and of course, “a standard issue, Jennifer Aniston hair cut.” The crowd erupted at this, to which Corgan finally said, “See, we bore you, then we make you laugh.” 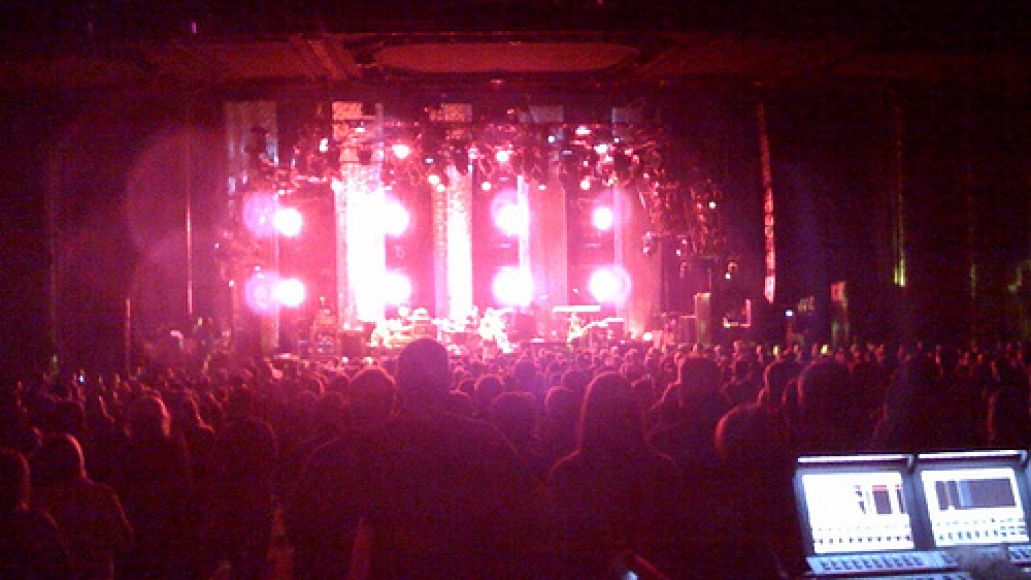 Laughing or not, it was actually a relief to hear some acoustic material. Typically at a rock concert, that’s the last thing one really “looks forward to”, however it was very inviting here. From behind an acoustic, and after introducing the band, Corgan stated he wanted to play a song “about his deceased mother”, but insisted “it’s about hope.” Soon after, Adore‘s “Once Upon a Time” played, which was followed by some material off of this year’s first quarter EP, American Gothic. It’s tragic the band doesn’t join Corgan in the studio because songs like “The Crux” and “The Rose March” come to life when there’s, well, more than two people behind it. This sweet yet short spot in the set was a delight, but that hardly lasted.

Immediately, fans became rowdy and ambivalent towards Corgan. Minute after minute, fans called out requsts incessantly, demanding everything from “Geek U.S.A.”, “Soma”, and at one point, “Frail and Bedazzled.” While one would have to agree the latter song would have been choice, some sympathy went out to the frontman, who by that point seemed nothing more than a puppet on strings. This became obvious when he encouraged this to continue and quickly spat back, “Twenty years of people yelling at me, I’m used to it.” When the arguments died down, the band burned through hits “Today” and “Bullet with Butterfly Wings”, and it was more than apparent that none of the members had any interest in ’em. 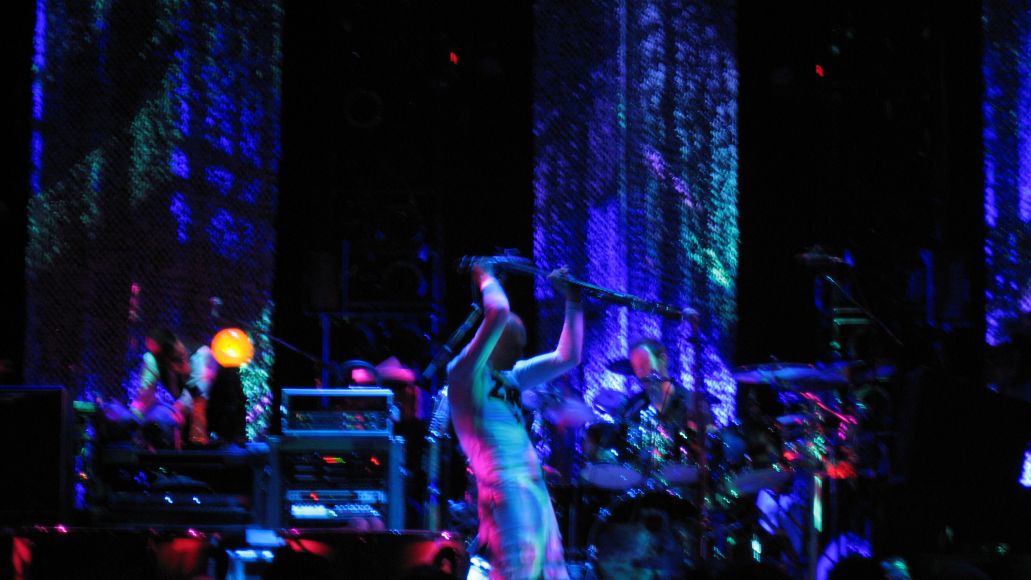 Unfortunately, the set closed with the bloated and over-distorted bombast that is the third reworking of “Heavy Metal Machine”, which here is essentially a warped hybrid of both Machina versions. This was a regular last year, and it’s a clunker for any set. It’s a shame since either of the two previous versions are superior to this. Though one was fortunate to experience an original Pumpkins tune before the band meandered into the twenty minute, and rather unnecessary, cover of Pink Floyd’s “Set the Controls for the Heart of the Sun.” It’s not even that interesting of a cover, and the crowd seemed to lose their mind (perhaps that’s Corgan’s plan). In al honesty, who could blame them? They came to see the band play, and even if the musician inside of Corgan wants to experiment, the least he could do would be to play his own material. Overall, Chamberlin sounded amazing, naturally, yet it essentially became musical masturbation.

The obligatory encore was more or less a “Thank you for coming” sort of affair. The sing along chorus line, featuring all of the band save for Harriton (behind the keys), made “We Only Come Out at Night” memorable, but the tongue in cheek throw in of “Everything is Beautiful” left everyone scratching their heads. That’s not all, though. As people remained standing, expecting a song or two to close out the night (the nerve of these people, right?), Corgan instead hosted a pseudo-Q&A, whose topics ranged from masturbatory fantasies of Sarah Palin to self deprecating questions (“Why aren’t you happy with us right now?”). Awkward was a word most fans, both new and die hard, would use to describe the surreal event, which at one point saw the microphone given to a fan that could have been mistaken for General H. Norman Schwarzkopf. 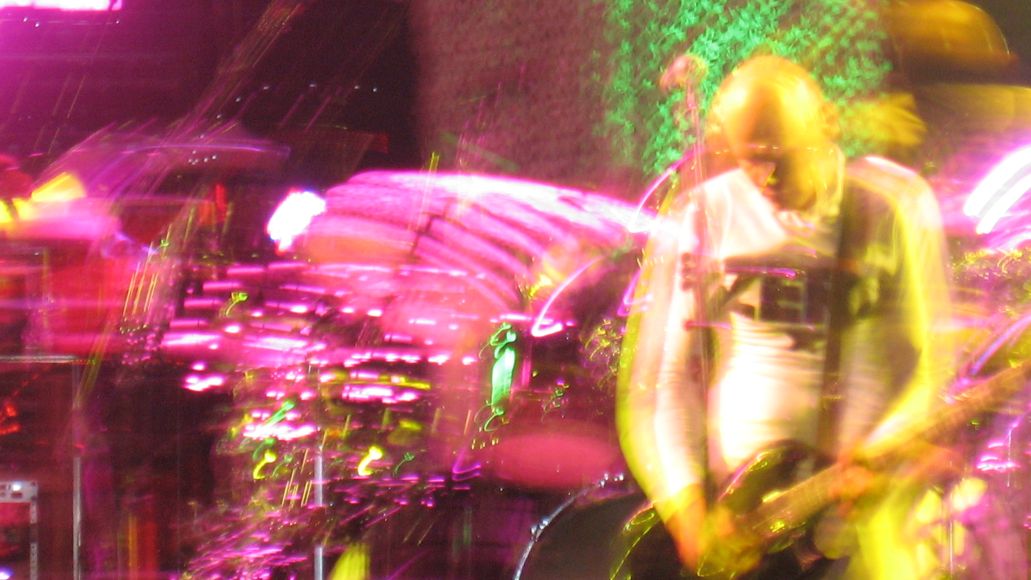 “Chicago loves you,” the amped up, possibly drunk, fan screamed. It was amusing, especially Corgan’s reply back, “You might wanna check the record sales. The demographics don’t match up.” When fans continued to stay, holding on to any last hope of a closer, Corgan continued to pace around the stage, declaring, “It doesn’t go anywhere from here.” When that wasnt enough, Corgan broke down some and admitted that he was overjoyed at being back home, and declared rather comically, “For those of you who love us, we’re going to torture you for another twenty years.” People laughed, smiled, and frowned all at once. It was an off putting moment, to say the least.

But, hey, after all, it’s his party and he can… yeah, yeah, you know the song. Well, here’s to three more nights of this!

Special thanks to the Smashing Pumpkins Media Militia and Cara Higgins for photo support.

Roctopus
Everybody Clap Your Hands
Tarantula
G.L.O.W.
Siva
Mayonaise
Tonight, Tonight
Speed Kills
Transformer
Superchrist
United States
Once Upon a Time
The Crux
The Rose March
Today
Bullet with Butterfly Wings
The Beginning is the End is the Beginning
Heavy Metal Machine
Glass
Set the Controls for the Heart of the Sun

Encore
We Only Come Out at Night
Everything is Beautiful