By a stroke of bad luck, Café Annapurna, Tallahassee’s first and only Nepalese restaurant stands at 666 W. Tennessee, nearly under the eaves of Tennessee Street’s ubiquitous 24-hour McDonald’s. But don’t let that scare you.

Café Annapurna, more simply called “Annapurna” by the locals, is conveniently located across the street from Florida State’s primary all-night Strozier library, and just up the hill from an odd assortment of dorms, lofts, and student apartments. And until just recently, I, too,

lived in one of those awkward and identical student apartments, and let me tell you, my apartment’s closeness to Annapurna was among its very few saving graces.

For those of you who might simply be passing through Tallahassee en route to wherever, Annapurna may just be another place with fantastic Lhasa noodles (a kind of stir-fry noodle dish with lime) and Achar (a tumeric-yellow potato salad). But for those of you who either live in Tallahassee or might be looking to plan your visit soon, let me let you in on a secret: Annapurna represents a crucial link in Tallahassee’s home spun, DIY, house show-oriented music scene.

Though the Café’s site doesn’t list any upcoming show, chances are good that any Annapurna event will be listed up on Tallahasseeshows.org (a local music events list) and/or announced on the WVFS 89.7 FM’s concert lineup beforehand.

In my time in the city, I not only sat around eating Dal under the watch of the incredibly patient and sweet tempered owners watching print-worthy local acts like Dead Legs (think about a slower tempoed Explosions in the Sky) and the 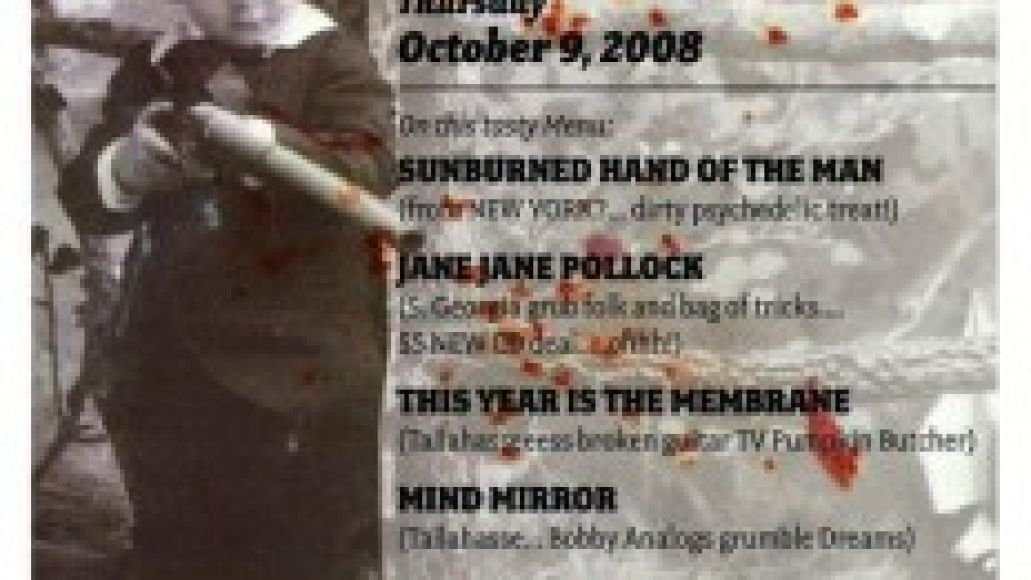 dark turntablism of bands like KEEPBULLFIGHTING (blippy dance pop) and The Penetralia (Burroughs-soaked lyrics and beats), I saw metal bands from Oregon, beautiful orchestral pop bands from Sweden, and most recently, I got to see Ariel Pink of Ariel Pink’s Haunted Graffiti play two songs at Annapurna before he stalked off stage complaining about the P.A. And this October, I missed out on seeing the Sunburned Hand of the Man play for much less than his Chicago performances must cost. Damn.

Though you might have to wait until after the start of 2009 for the next Annapurna event, as the café’s schedule very loosely follows that of the Florida State school year, do be vigilant, as much like aura-borealis, you might be able to see something that doesn’t happen too often. I miss this place. Oh, and Namaste.