John Hiatt and Lyle Lovett, two of the most accomplished singer-songwriters of the last three decades, took the stage at Pittsburgh’s Carnegie Music Hall Thursday night for an evening of trading songs, stories, and jokes. It was a remarkably low-key affair. No sets or elaborate backdrops. Just a couple of spotlights, two acoustic guitars, and a pair of old friends delivering a night of stellar songs and indelible performances.

An old-fashioned guitar-picking session is not the norm for either artist. Lovett has spent the bulk of recent years playing with his appropriately dubbed Large Band, and Hiatt has been touring for several months with a rocking outfit to promote his latest album, Same Old Man. So, it was fair to wonder about the dynamic the two would share on stage. Would an acoustic evening of back and forth offer the audience something fresh and worthwhile? The crowd was in luck.

Within the first few minutes of the show, it was clear that each artist could bring out the best in the other, both in conversation and performance. Lovett joked about Hiatt’s perpetuation of the rockstar myth, and Hiatt taught Lovett some Pittsburghese and asked, “You ever eat a Roethlisberger, Lyle?” Perhaps the most enjoyable part of the evening was watching the awe and reverence Lovett and Hiatt displayed while the other was playing. Plastic surgeons couldn’t have removed the curious smile from Lovett’s face, and Hiatt was constantly tapping his toes and rolling his neck to his friend’s grooves. What a rush to see two legends enjoying themselves so much, and this good-time vibe spread throughout the audience. 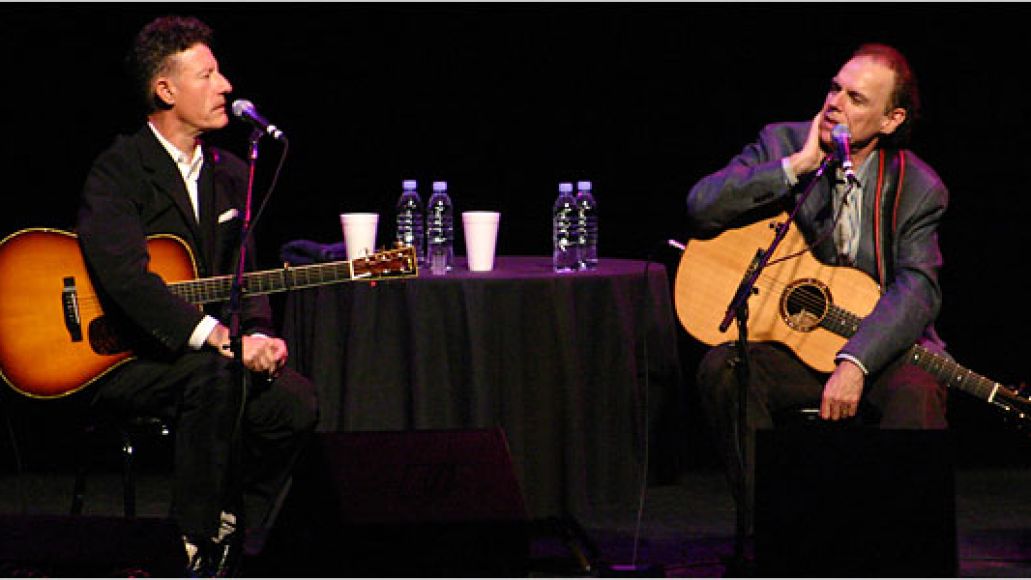 Both Hiatt and Lovett are known more for writing songs than performing them, a consequence of each being a gifted composer and lyricist. However, you’d be hard pressed to find two performers more honed in their command and delivery. Hiatt’s material is more guitar-driven, and his gruff and powerful voice pierces and pulsates throughout a crowd. Lovett has more of a folk quality to his performance, and his beautiful voice, which has not diminished, seems to soar and float above the audience before it settles and hits home.

Hiatt impressed the audience with his ability to still make his songs rock hard with only an acoustic guitar and his raw voice. His opening song, “Perfectly Good Guitar”, perfectly set the stage for his set, demonstrating how Hiatt could alter structure and phrasing ever so slightly to transform a grunge rocker into an equally powerful acoustic song. He worked similar magic with “The Tiki Bar is Open”, “Tennessee Plates”, and “Drive South”, a gorgeous mid-tempo song that hit all the right notes with the infectious chorus, “So if you’re feeling down and out/Come on baby drive south/With the one you love.”

Lovett offered a wider range of styles, which is not surprising considering he has recorded in every genre from country and folk to blues-rock and jazz. But Lovett’s best songs were delicate folk-rock arrangements that perfectly suited his clear delivery. “North Dakota” and “South Texas Girl” are songs that Lovett routinely plays with his Large Band, but these tales of cowboys, love, and simpler times only need Lovett and his guitar to make them shine. The highlight of Lovett’s solo numbers was “Nobody Knows Me.” Lovett joked about how he is always asked to play this song at weddings. “I tell them I’d be more than happy to play it for them, as long as they know it’s a cheating song.” The stripped-down song talks about how well lovers know each other, which also means there is no doubt when one is unfaithful. “And she cried, ‘Man, well how could you do it?’/And I swore there wasn’t nothing to it/But nobody knows me like my baby.”

Hiatt and Lovett did play a few songs together, each lending guitar and voice at times to the other’s tune. The best duet came when they traded verses on Hiatt’s rocking “Thing Called Love”, which the two had performed on Letterman the night before. Lovett’s “My Baby Don’t Tolerate” allowed the two to play guitar in tandem and bounce grooves back and forth. But maybe the comedic highlight of the night was Lovett’s “Keep it in the Pantry”, a hilarious song about cheating in the kitchen, or, as John Hiatt called it, “infoodelity.” 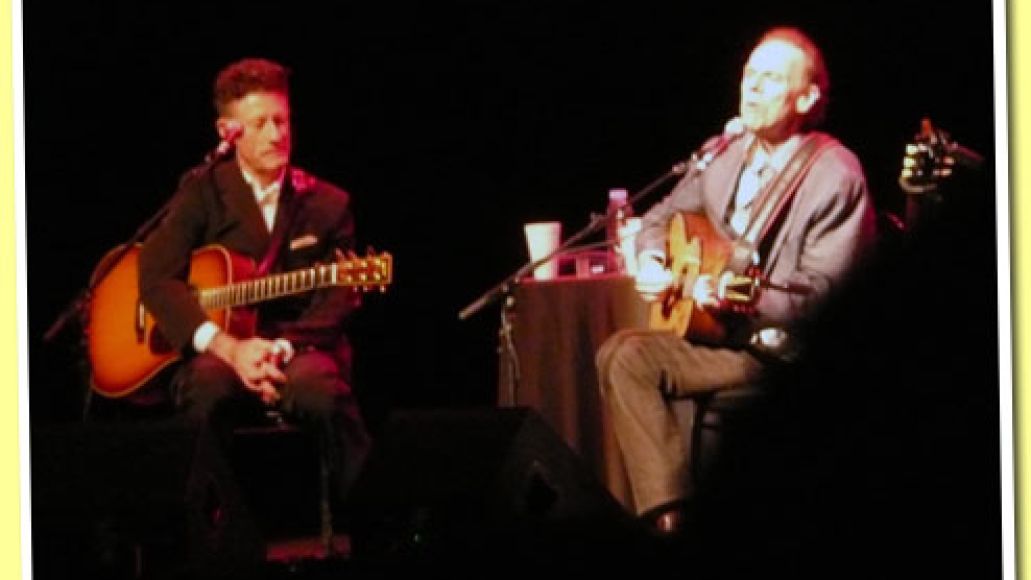 The encore was not surprising but fitting. Each artist played his signature song and gave performances that left no doubt as to why fans identify with them. Hiatt sang his classic lover’s plea, “Have a Little Faith in Me”, unleashing everything his powerful voice could muster in the song’s final, emotional moments. Lovett performed “If I Had a Boat”, a song whose beauty has a crystalline quality to it and seems to impart a simple truth about life. It’s one of those songs that any songwriter wishes he or she had written.

It was a night of soaring highs and very few lows. One disappointment was that Hiatt played no songs off Same Old Man. He did, however, debut two new songs that he had recently written. Lovett asked him what he looked for when debuting a song. “Support,” shrugged Hiatt. “Encouragement.” The only other minor letdown was that Lovett didn’t cover the late Townes Van Zandt, a legendary songwriter from Lovett’s native Texas. Dozens of stars from Bob Dylan to Willie Nelson have covered Van Zandt’s material, but no one has been able to make these songs his own and do them justice as Lovett has. Still, when your only regrets are about what didn’t make the setlist, you’re truly grasping at straws.

Hiatt and Lovett clearly enjoyed themselves Thursday evening, and that sentiment was contagious among the crowd. It’s a rare treat to see two talents of this caliber on stage together, and it’s refreshing to see artists being able to put egos aside for the sake of delivering great music in a unique and innovative forum.

A special thanks to additional photo support by Whisky Fun and New York Times.

Home is Where My Horse Is *

The Tiki Bar is Open #

Keep it in the Pantry *

Have a Little Faith in Me #

Hiatt and Lovett talk, swap, and rock in Pittsburgh (2/5)