It’s probably not a good time to be Irving Azoff these days. After all, not much is going right for the CEO of Ticketmaster. In addition to currently being involved in talks concerning a possible merger with either Live Nation or AEG, a report that has resulted in a fury of bad press and negative criticism over the possibility of what would be a potential monopoly on the North America’s concert market, Ticketmaster now has to deal with Congress and perhaps even more daunting, The Boss.

Just one week after Live Nation was ravaged with problems on Phish ticket sale day, Ticketmaster caused its own slew of headaches on Monday when the service left many fans attempting to buy tickets for Bruce Springsteen‘s upcoming world tour with a glitch, rather than a receipt. Per Backstreets.com:

On Monday morning, fans trying for NJ tickets were told that the “ticketing system is currently unavailable due to routine maintenance.” (Ticketmaster claims “only a very small percentage of our fans” were affected.) Such is the way. But this time around, a new development added insult to injury — upon notification of a sell-out, fans were directed to TicketsNow, a Ticketmaster-owned company that handles the secondary market, where tickets were already available at inflated prices. Now that’s synergy! 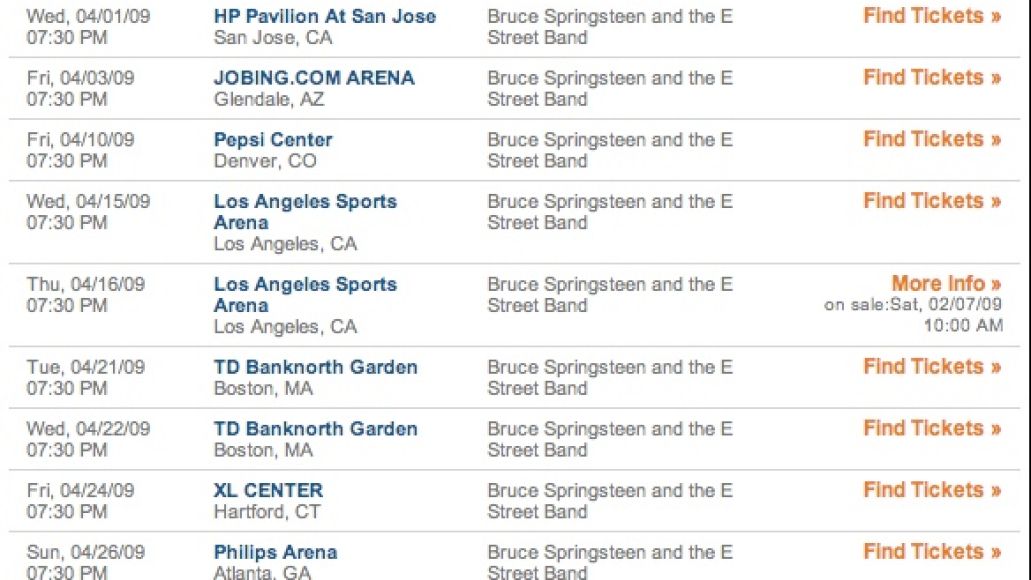 Ticketmaster cited technical problems as the reason for the glitch; as spokesperson Albert Lopez noted: “It was an unfortunate computer glitch that happened on our side…As it was described to me it didn’t have anything to do with high demand. Ticketmaster.com’s network didn’t fail. This was for specific shows. Having said all that, that doesn’t take away from the heartache fans experienced.”

Yet as now turns out, a few people aren’t buying the excuse, including New Jersey congressman Bill Pascrell, who now want to investigate the company and its practices. According to the Star-Leger, Pascrell wrote a letter to the Federal Trade Commission and the antitrust division of the Justice Department asking them to “investigate the relationship between Ticketmaster and TicketsNow to ensure that the procedure for purchasing tickets remains fair to the average consumer.”

“There is a significant potential for abuse when one company is able to monopolize the primary market for a product and also directly manipulate and profit from the secondary market,” he wrote. “The speed with which tickets were made available on Ticketmaster’s official resale site raises questions about whether TicketsNow brokers were given preferential treatment.”

Bruce Springsteen isn’t too thrilled about the situation either. In fact, so much so that the legendary musician recently penned an open letter to his fans, explaining the situation from the band’s perspective and offering a few choice words for the company in question.

We know there was much confusion regarding Ticketmaster and TicketsNow during last Monday’s on-sale dates. We were as confused as you were, as we were given no advance notice of the major changes in the Ticketmaster-TicketsNow world. (Bear in mind that we are not clients of any ticketing company, and that all those arrangements are between venues and ticketing companies.)

Last Monday, we were informed that Ticketmaster was redirecting your log-in requests for tickets at face value, to their secondary site TicketsNow, which specializes in up-selling tickets at above face value. They did this even when other seats remained available at face value. We condemn this practice.

We perceive this as a pure conflict of interest. Ticketmaster is there to ensure that we have a good, fair sale of our tickets at their face value plus normal ticketing charges. TicketsNow is supposed to be a secondary site where people who already have tickets may exchange, trade, and, unfortunately, speculate with them. We have asked this redirection from Ticketmaster to TicketsNow cease and desist immediately and Ticketmaster has agreed to do so in the future and has removed its unwanted material from their and our site.

While many of you have sent notes to us and your local promoters, you may also send accurate informational letters to Albert Lopez of Ticketmaster and he will try to address your questions.

A final point for now: the one thing that would make the current ticket situation even worse for the fan than it is now would be Ticketmaster and Live Nation coming up with a single system, thereby returning us to a near monopoly situation in music ticketing. Several newspapers are reporting on this story right now. If you, like us, oppose that idea, you should make it known to your representatives.

The abuse of our fans and our trust by Ticketmaster has made us as furious as it has made many of you. We will continue to do our utmost now and in the future to make sure that these practices are permanently curtailed on our tours.

Seriously, how can you not love this guy?

Of course, at this point, none of the above will actually help those fans locked out during the initial go around, considering it’s highly unlikely Ticketmaster has a closet full of Bruce tickets available to drop at a moments notice. So while the practices of the company may be investigated and ultimately, and hopefully, changed, for those Bruce fans looking for admission to any of his upcoming dates, they better hope someone will hook them at the Backstreets Ticket Exchange. Either that, or start packing for Bonnaroo…

Who likes Ticketmaster? Not Bruce or Congress...