Look, we’re a music site through and through. However, that doesn’t mean we’re not film enthusiasts. Therefore, we came to an agreement, one that makes total sense. We’re going to focus on film soundtracks. Personally, I feel that in the wake of file sharing and digital downloads, film’s soundtracks are swept under. That wasn’t always the case. The truth is, a film’s soundtrack is a sacred, sacred thing, and it’s something that still exists today (e.g. this year’s Adventureland). Therefore, we’re going to give them back the much deserved spotlight. We’re calling it Cinema Sounds and each week, god willing, we’re going to spotlight a film’s soundtrack, analyzing its successes or its faults. To start it off, writer David Buchanan decided to digress on the 1994 comic to film adaptation, The Crow. So, without further ado, let’s get the ball rolling. Oh, and feel free to give us your suggestions, too. -Michael Roffman, Editor-in-Chief

For a moment in time, picture yourself in the throes of 1994. Alternative and industrial music were in the mainstream while youths everywhere nursed their emotional wounds left by Kurt Cobain’s suicide. Up and coming hip-hoppers found escape in Nas as he brought forth the classic Illmatic to kick gangsta rap in the head. Meanwhile, California surfer punks boosted The Offspring’s Smash (or even Green Day’s Dookie) to record setting sales. Even aging rockers had their share in the madness, perhaps indulging in Pink Floyd’s final tour. That same year, however, another icon was lost too soon, thereby glossing over an already grim, classic film with even more tragedy — and one hell of a killer soundtrack.

The Crow is one of those universal tales of duality — of revenge and love, rules and rebellion, Gods and men. While the film did lend itself to a generation of teenagers with goth subculture and budding emo tendencies abound, The Crow always had a viable story to tell. In fact, the story’s illustrator and writer James O’ Barr originally conceived the project as, “a means of dealing with the death of his girlfriend at the hands of a drunk driver.” When Eric Draven, the tragic main character who’s brought back to life, avenges the death of his girlfriend Shelly, O’Barr could only relate with pen, paper and tattered memories. What’s more, this tragic backstory only continues. 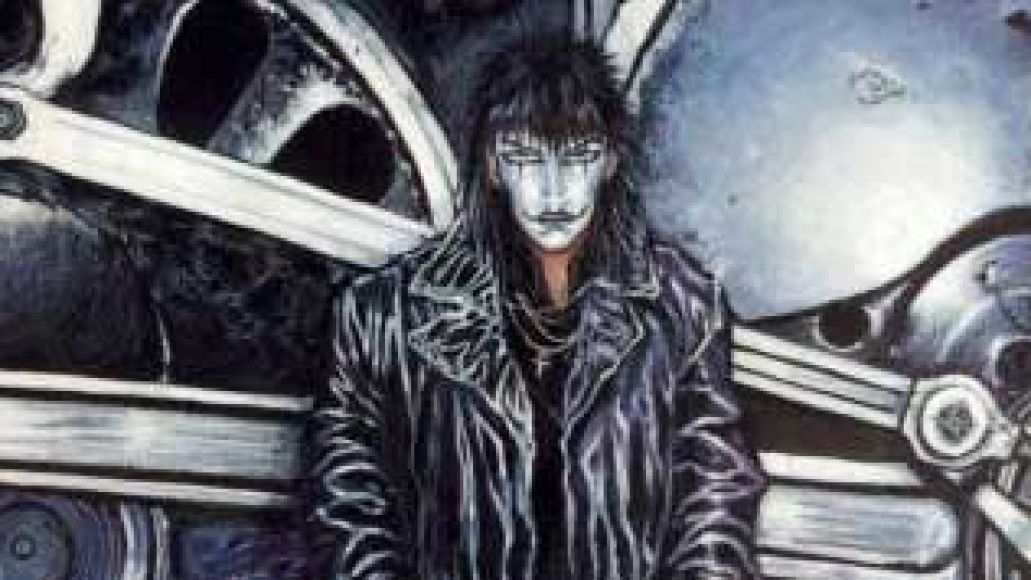 Towards the end of the film’s shoot, actor Brandon Lee suffered a fatal wound from one of the prop guns. What should have been a blank was actually a loaded gun and the actor died right on set — in fact, in the very scene that Draven is shot and killed. Most attribute the comic’s inspired and amassing Goth culture to this on-set death. Regardless of the parallels between Lee and Draven, the acclaimed anti-hero had already become the icon of Goths everywhere, long before the film came to fruition. In a sense, O’Barr’s comic portrayal seems like a beacon for everything and anything that is Goth culture, and much of that has to do with music.

The comic’s dark and macabre storyline is littered with countless references to post-punk groups popular throughout the eighties. Some of The Cure’s lyrics are even featured within the novel itself, which explains the spill over into the film’s soundtrack five years later. A self professed fan of O’Barr’s work, Robert Smith penned the anthemic “Burn” specifically for the film and its corresponding soundtrack. While the novel had its own musical accompaniment entitled Trust Obey: Fear and Bullets, it’s the film soundtrack that later played host to the alt-rock themes of the early ’90s and then some.

Immediately following the film, the corresponding soundtrack hit shelves with much applause and praise, even topping the Billboard 200. Despite its eclectic mix of artists, the soundtrack was a cohesive and concise representation of both the film and its core themes. The Cure’s “Burn”, which opens the album, carries with it an assortment of emotions. There’s a sense of despair and loneliness, yet also a subdued bitterness that’s awash in rage and lust. It’s melancholy, but driving. It’s moody, but poppy. This schizophrenic-juggernaut style sets the bar for the remaining thirteen tracks, and while most songs hardly hit the watermark that Smith sets, they come pretty damn close. It’s an epic ride, really.

But mostly, it’s a surprising one. Bands that would otherwise have no place on this type of soundtrack really blend, the most obvious example being The Violent Femmes. While the lyrics this Wisconsin act have come up with in the past could be thought of as foreboding or even taboo (“Country Death Song”, “Black Girls”), “Color Me Once” is perfectly suited on this album as the imperfect balance of balladeer blues and clumsy alternative a la Weezer’s “Undone” or “El Scorcho”.  Somehow while the Femmes may not have worked on this album, they fit here with a sound that comes off like watching a car crash in slow motion, and it is quite possibly the band at its finest (not counting the extremely addictive, “Freak Magnet”).

Industrial enthusiasts find the most solace here. Between the Machines of Loving Grace’s “Golgotha Tenament Blues” and Nine Inch Nail’s brilliant cover of Joy Division’s classic “Dead Souls”, there’s enough here for seconds. The latter is a prime track, though. For anyone who is a fan of Trent Reznor’s early catalog, it’s blatant how much influence both English rock band Joy Division and its post-Curtis formation New Order had on Reznor. During the mid-90s, industrial was becoming more and more mainstream, thanks in part to Lollapalooza and also in light of Reznor’s signature stage presence, too. Due to this fact, his addition is a blessing in disguise. The industrial guru essentially amps up the English tune, nearly making it his own. On film, its gloomy beats serves its purpose, but on the soundtrack, it’s just one rocking vibe to ride for a good five minutes.

Of course, we couldn’t chalk this soundtrack up without mentioning its biggest hit, the Stone Temple Pilots’ alternative rock staple, “Big Empty”. Everyone who has ever turned on a radio past eight ‘o clock will surely recognize the morbid blues of this tune, a feature rather welcome here amongst the overall gloom and doom. Originally debuted acoustically on MTV Unplugged, the studio cut of “Big Empty” made its way to The Crow before copping a place on the Pilots’ successful sophomoric effort, Purple. This would explain the soundtrack’s Billboard appearances.

The subdued rage gets literal, however, with the inclusion of the slightly more upbeat but no less tempered track from Rage Against The Machine, appropriately titled “Darkness”. While admittedly not a band to fit the Goth-type culture, the tune does go hand in hand with the film’s Devil’s Night introduction. “Darkness” is a dose of anarchy that makes its presence known, and it’s properly placed considering only half the song is chaotic while the other half sports guitarist Tom Morello’s infamous threading, which he does here in a rather somber subconsciousness.

It is easy to tell how brilliantly cohesive the first half of this soundtrack is as it’s filled with morbid fluidity and silent worship that occasionally gets the shake up from powerful choruses and memorable riffs or beats. Some fans may be torn between which half is better, while others may listen from beginning to end without a problem. Given the strong and popular band roster, the first half is easy to love, even though the latter end brings forth astonishing inclusions by ’90s alternative staples like Rollins Band and The Jesus and Mary Chain. Some metal slips in too, with chaotic tracks like Pantera’s cover of Poison Idea’s “The Badge” and Helmet’s “Milquetoast”. Closing the album, jazz singer Jane Siberry brings life and sobriety to the charming song “It Can’t Rain All The Time” which, carved into the film’s storyline, is an original tune written and composed by Eric Draven himself. It’s a proper end and a fitting tribute to both Brandon Lee and all the elements that make up The Crow.

Collectively, The Crow Original Motion Picture Soundtrack is timeless in its efforts of preserving both the film’s vivid imagery and the memory of mid-to-late ’90s modern rock acts. Save for the Stone Temple Pilots, no band overshadows another here, and that’s what should define a great soundtrack. What’s more, the album’s diverse song selections parallel the main character’s almost split personality and the chaos thriving within him. That’s not only a successful trait, it’s a remarkable feat. That being said, The Crow Original Motion Picture Soundtrack is our most appropriate first pick for Cinema Sounds.