Despite some of the worst weather the east coast has had to deal with this calendar year, House of Blues at Myrtle Beach was packed with the dedicated fans of QueensrÃ¿che. The ’80s rock band hailing from Seattle rawked the faces off of its loyal followers with a show featuring three suites, each one representing an album. For this tour, only songs from 1986’s Rage for Order, 1990’s Empire, and this year’s American Soldier are being played. The audience is left with a showcase displaying the band before they broke through commercially, where they are now, and a reminder of the heights of their greatest success.

With no opening act, the crowd waited for 8:30 p.m. for their band to arrive on the stage. With a simple stage set-up (only a decent-sized screen above the drum kit), QueensrÃ¿che walked upon their stage shortly after they were expected, and didn’t let up until over two hours later.

The first suite (each set featuring full-songs, not abbreviated cuts) featured seven songs out-of-order from Rage for Order. As the band began to play, lead singer Geoff Tate entered the stage like he owned it, adorned with a black fedora and sunglasses. The crowd exploded (some fans claimed it was their 33rd show) as “Neue Regel” began. Tate’s voice has held up remarkably well over the past 25 years, and seemed confident throughout the proceedings. After “Screaming in Digital”, he told the crowd, “Nice to see your smiling faces” 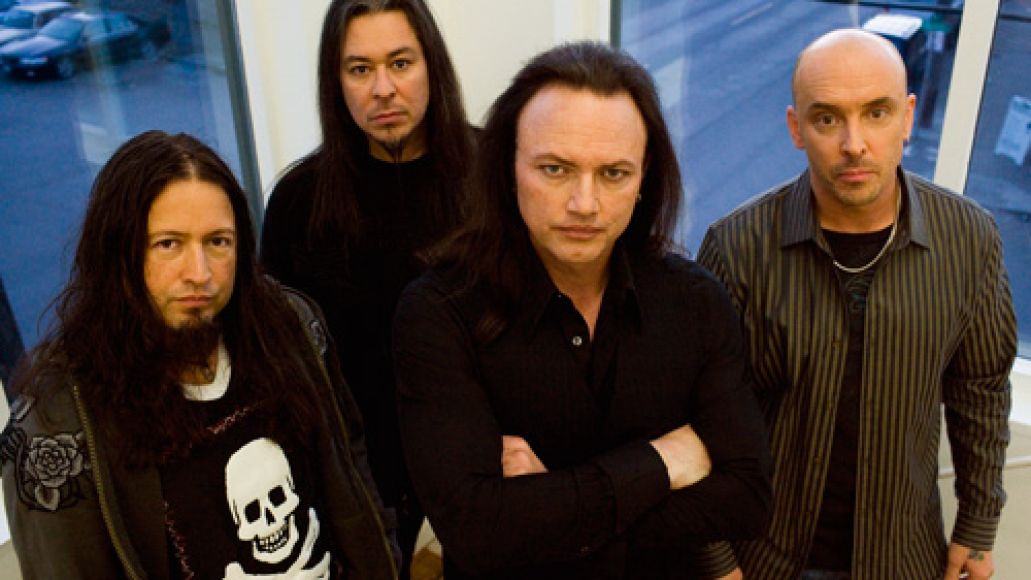 before the band ripped into “I Dream in Infrared.” The sunglasses came off and stayed off during “Walk in the Shadows”.

As for the guitar interplay between Michael Wilton and new touring member, Parker Lundgren, they were pretty flawless. Drummer Scott Rockenfield drummed with unrelenting energy, and bassist Eddie Jackson joined the members at the front of the stage on occasion, each resulting in loud ovation. Another touring member, keyboard/guitarist Jason Ames, even sang lead vocals on “A Dead Man’s Words”.

Opting to play the suites out of order was the right decision. American Soldier is easily the weakest of the three albums represented, and to have that suite close out the show would have been a mistake. As a bonus, the album comes off much better live. With images of war that appeared on the large screen throughout the suite, the band returned to the stage not with Tate, but with an actual military representative. Soldier A.J. Fretto, in full garb, screamed the album’s opening line after a salute. He demanded, “On your feet!” as the band launched into “Sliver”. He remained on stage throughout the rest of the song, interjecting lyrics throughout even after Tate rejoined the band (this wasn’t a one-off; he’s actually been touring with the band).

With the content of the war, this suite proved quite emotional for everyone. While introducing “The Killer”, Tate began to choke up and even covered his face during the song’s coda. For “Home Again”, Tate’s young daughter, Emily, wearing a green dress, sang with her father. The audience ate it up, applauding as Tate spun his girl around the stage and encouraging her as she sang at the middle of the stage.

As the album cover for the band’s smash Empire began to flash on the screen, album opener, “Best I Can”, also opened up the suite. Any fans that may not have been familiar with the RÃ¿che‘s latest work were brought back into the fold, singing along as Tate offered the mike out over the raised hands of the audience several times throughout. Obvious highlights were “Jet City Woman” and rock ballad classic, “Silent Lucidity”, the latter of which saw a welcome return of the lighter (as opposed to our modern day equivalent, the cell phone).

As the set reached its conclusion, grown men were seen hugging in the pit, high fives were flying about, as well as the Ronnie James Dio-approved devil horns. After returning to the stage for a one-song encore of Empire’s title track, all performers hit the center of the stage to take a bow. QueensrÃ¿che had played Myrtle Beach before, and will certainly be back again next go-around.