This past weekend, the Northside Festival descended upon Brooklyn, NY, providing a full weekend of music showcases. As one should expect, Consequence of Sound was on site to take in the sites and sounds. Rose Martelli has our second report on the festivities…

Even without the “O” at the start of their band moniker — or the very fact that said moniker was borrowed from a song on the O Brother, Where Art Thou? soundtrack — O’Death‘s lyrically violent sound seems bespoke to score a Coen Brothers film. In fact, if the Brooklyn-based quintet had been around at the time of that movie’s shooting, they would’ve been perfect for a cameo appearance, all torn-up-and-sweaty dungaree shorts, weirdly engaging stage presence, and thrilling, thrash-hick vibe.

Another way to put it: Appalachian death punk. Throughout their nice, long, afternoon set at Music Hall of Williamsburg, O’Death’s signature sound — not just foreboding, but downright threatening, like an approaching tornado — practically peeled the paint off the walls. In their opening number, the grave-tempoed “Nathaniel”, shirtless drummer David Rogers-Berry banged on his kit not with sticks but with a set of thick metal chains in his hands, which he slapped against his skins and shook in the air with evil glee (all while standing on the kit itself). Fiddler Bob Pycior kicked off another song  by insidiously scrawling his bow across Gabe Darling’s banjo frets. Lead singer Greg Jamie, serving as the eye of this storm which also includes bassist Jesse Newman, exuded calm confidence throughout, particularly on “Only Daughter”, in which his soft vocals more than held their own against the number’s harsh staccatos. During their second encore, the electrifying “Rise Up”, it felt as if band and fans alike were so spasmodically charged they might just commit spontaneous hari kari — yet another way O’Death lives up to its name.

As Emanuel and the Fear — all ten or eleven of them; it’s a big outfit — warmed up for their set at Spike Hill, the sight of all those orchestral instruments (cello, trombone, flute, violin…), plus the fact that they were actually employing music stands, made it look more like Emanuel and the B’nai B’rith Youth Chamber Group of South Williamsburg. And like such a gaggle of nerdy, young prodigies-in-the-making, the band sounded promising but could’ve used some tightening up. 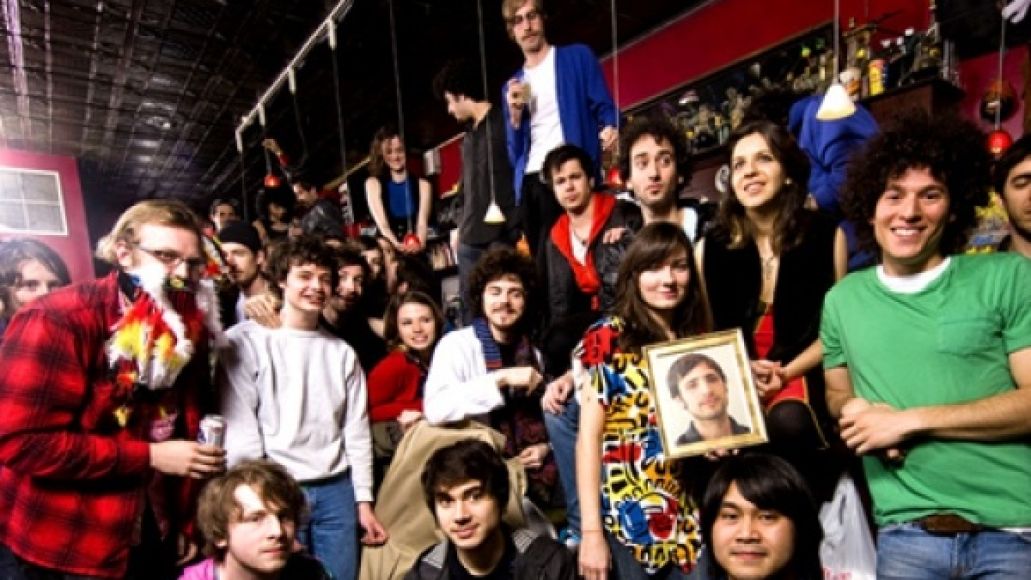 Jewfro’d, Andy Samberg lookalike Emanuel Ayvas proved to be a pleasant frontman, with his easygoing vocals and quick-witted crowd rapport. What felt off about the performance was the group’s choices of tempo. It occasionally used 7/8 time, which imbued the music with an ill-suited, slightly Rush-like, prog-rock vibe. Once or twice elsewhere, the music (which generally carries more than a whiff of Vampire Weekend’s style) seemed to wander in a pulseless free time, refusing to put down roots. Ayvas doesn’t shy away from lyrical cliches — he’ll even sing about how he only wants to sing in a rock and roll band — which doesn’t help in making something more memorable. But it seems that Emanuel and the Fear just need some more time to grow as a band — by bar mitzvah time, I’m sure they’ll graduate to musical manhood.

If you like Stars — and if you don’t yet, you really should and will — you would’ve loved Savoir Adore‘s evening-time set at Spike Hill. Lead singers/group founders Deidre Muro and Paul Hammer produce lovely homophonic harmonies together, sung above sweet-and-simple beats and hooks. And though their Europop vibe may be off-putting to some (I understand if you feel you’ve just had enough of that stuff for a while), their modestly funny demenaor could make a fan out of most. (“Welcome to our 80s synth pop song, we hope you like it!” Hammer announced cheekily at one point.) But they’re also not shy about rocking out when rocking out is required, such as on the irresistibly catchy and somewhat grindy “MERP”. Poppy yet mature, tight yet freeing, their sound’s one to keep listening to as the band gets bigger still.

The Dodos:
June 14th: Studio B 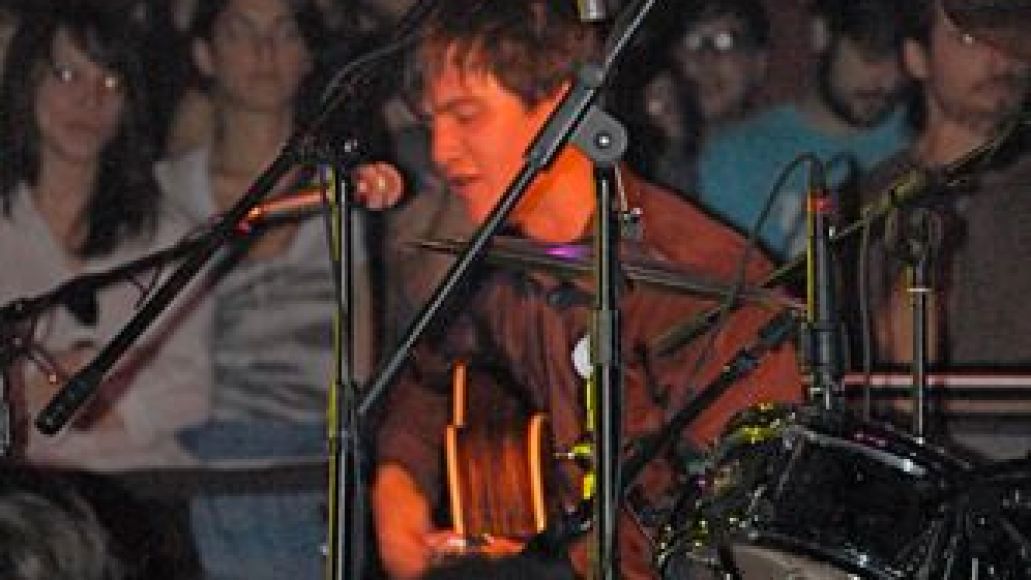 Who thought it’d be a good idea to book The Dodos — whose wondrous Afro-world-folk-pop aesthetic ranks them as one of indie music’s most inexplicably unsung singer-songwriter outfits  — into a pitch-black club with shitty sightlines and the garish feel of a gold-platd, Eurotrash pick-up joint? That was the first thing, and really the main thing wrong with the band’s Sunday matinee. The place was packed to the gills with youthful hipsters just dying to hear “Fools”, The Dodos’ best-known single (I believe it’s currently being used in ads for Miller Chill), half of whom then left when the band finally played it a little more than halfway through their set. Singer Meric Long exhibited a little more than just a passing interest in the crowd who’d turned out; the powerful playing and evident enthusiasm of drummer Logan Kroeber easily outmatched him. All in all, they played their songs off Visiter competently, but to the hardcore Dodos fan, the show ranked as a letdown.

I caught Teddy Blanks at Public Assembly on Sunday night by accident (I got the time wrong on another act), and ironically, I wasn’t quite sure if what I was watching was, in and of itself, an intentional piece of performance-art pop or just some wackily self-confident guy with a not-bad set of pipes who decided to jump on stage and kill time before the real musical act showed up.

So who or what exactly is Teddy Blanks? He’s a singer-songwriter (and former frontman of a band called The Gaskets) who performs, to quote another critic, “lo-fi laptop electro.” There are no instruments or other people performing them onstage with him; the synthpop sound seems to emerge out of nowhere, accompanied by Blanks’ quite capable vocals and, standing on one corner of the stage, a simple TV screen on which various complementary images shuffle past. (Most memorably Sunday night, the movie Eyes Wide Shut was shown in perpetual fast-forward as Blanks sang.) He writes original songs and does covers. On the former, he’s got an EP full of medical issues called Complications; he describes it on his website as “six upbeat pop songs about strange diseases and medical trauma.” This includes “She’s Got the Itch”, a great pop song. As for covers, in a similarly health-concerned vein, he does “Girlfriend in a Coma”. And he’s definitely an act worth seeking out. 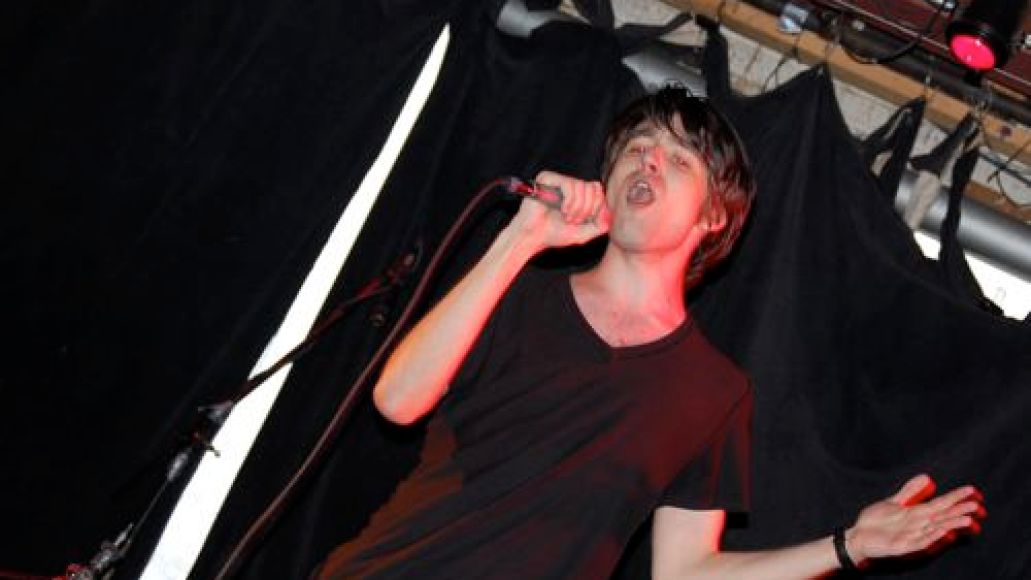