18 hours of dance music: Hell to my parents, but heaven for me. This past weekend, I headed down to Starscape Festival in Baltimore for what was to be an epic adventure.

As a junior at the University of Maryland, I have a lot of friends from the Baltimore area; this means a lot of people to meet up with at the fest, but no one to ride with. In last-minute desperation, I put ads (pleas, rather) on JamBase and Phantasy Tour explaining my situation and need of transportation. At 7 a.m. on the day of, I received a mysterious text from a number I didn’t know: “U still need a ride to starscape?” Blinded by desperation, I answered immediately and arranged to meet up with the driver and her boyfriend near my apartment a few hours later.

We left from my apartment in downtown New York City to go pick up another festival-goer in Harlem, over 150 blocks away. After getting lost innumerable times and finally ending up in New Jersey, the drivers and I were a little bit annoyed; so much so, in fact, that the driver’s boyfriend called the kid we were trying to meet to leave him a voicemail filled with cussing and death threats. Fearing for my life, I mumbled a weak excuse about homework and started to read a book assigned for one of my classes; however, I was soon distracted by the couple’s discussion of upcoming festivals. They mentioned they were going to pretty much every festival ever, from Michigan to West Virginia, so I naively asked how they could afford it. “We work them”, they answered. I was so excited! I volunteered last summer at All Good, and it was excellent.

When I said that, they laughed at me. Realizing my confusion, they explained that they don’t work at festivals; they work festivals, period. I was riding down to Baltimore with ecstasy dealers. Awesome. 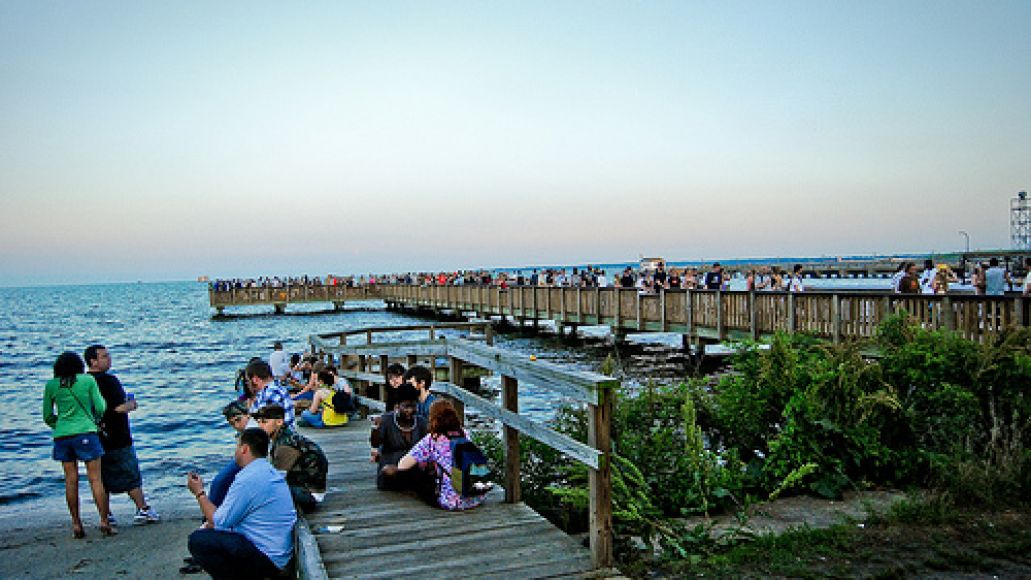 Three hours and millions of imagined scenarios about how I’d get out of jail later, we arrived in Baltimore just in time to catch some Telepath. Though undoubtedly a band best suited for nighttime, Telepath’s set was early on, at 5 p.m.; still, though, there was a sizable crowd and great vibe. The band ran through favorites like “Chaos Theory” and “Can’t Come Down”, as well as some lesser-known songs featuring their signature Middle-Eastern groove.

After Telepath, my friends and I decided to check out the dance tent; inside, we found a huge crowd of people, a single DJ, and a smoke machine. The tents are great spaces (aside for the dance tent, there’s also one dedicated to drum-n-bass) because air can circulate but the sound is clear. We stayed for the break between Telepath and Pnuma Trio; it was nothing remarkable, but we definitely had some fun shaking our groove thangs with probably one or two hundred other sweaty individuals.

By the time we’d had enough of the smoky haze, it was about time to return to the Main Stage for Pnuma Trio. This is a group I’d been trying to catch for over a year, so I was pretty excited. Still light out, the set started out slowly, and though it hurts to say, I was almost bored. I walked away to meet up with some more friends, but got dragged back in time for the last half-hour of the set. Now a little bit darker outside and a little more crowded inside the gates, Pnuma was getting into their set and the crowd, accordingly, was getting down. I maneuvered back up to the ramp and soon felt someone squeeze my arm: The kid next to me wanted to make sure I appreciated just how excellent Pnuma was. That moment pretty much summer up Starscape for me; we were all just a group of kids looking for good beats and a great time. 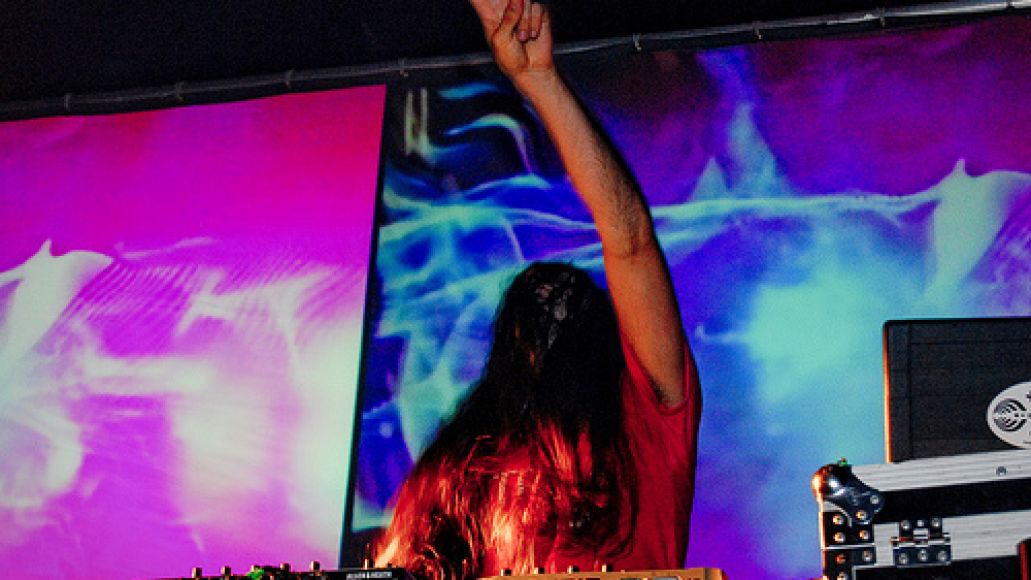 After Pnuma, I kept rooted in my spot so I’d be right in front for one of the night’s most-anticipated acts: Bassnectar. A DJ from San Francisco with a cult-like following, Bassnectar is an act you have to see to understand. His set is an intricate mix of music, vocal samples, and images broadcast behind him from a three-screen projector that drives the crowd wild. Opening with the classic “5…4…3…2…1” image from old movies, the set went right into some dark beats that were almost drowned out by the screams from the audience. Soon, the dark dub-like sounds were replaced by more typical Bassnectar, dance music set to tracks with higher BPMs than the average human should be able to handle; no one called anyone at Starscape average, though.The next hour and a half were a blur of arms and legs as my body tried to keep up with the musical gifts Bassnectar was throwing at my ears. Sweaty and satisfied, the Bassnectar set lead me into Lotus at the Beach Stage.

Another group I’d been trying to catch, Lotus is a jam-rock-dance fusion act with a pretty devoted following. By the time they started playing, the sun had fully set and the party was in full swing. We settled in by the waterfront and watched in awe as Lotus began to tear up the stage. Though Bassnectar was undoubtedly the highlight of my night, Lotus was a very close second. The audience recordings I’d spent the previous year or two listening to were hit-or-miss, so I didn’t know what to expect; however, from the beginning of the set until I left, I was enamored by the band. Appropriate for the festival, Lotus toned down the rock in exchange for a more electronic sound; the effort paid off, because the crowd was enraptured by what was happening on stage. 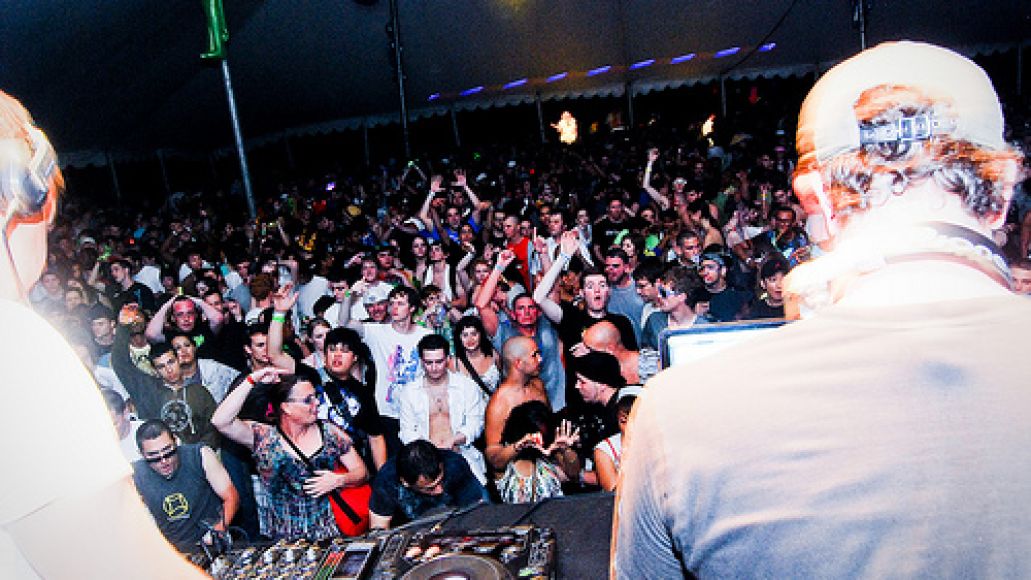 With an hour of Lotus left to go, I went back up to the Main Stage to catch the Disco Biscuits. Drawing the biggest crowd of the night, the Disco Biscuits were the most popular name on the bill and one of the most anticipated acts of the festival. Bisco is a band I’ve seen many times, and though sometimes I leave their shows feeling like I’ve been blessed by the gods of music, I’ve caught many a dud show as well. This first set was of the  former category; it was almost two hours of non-stop electronic-based jam featuring one of my favorite songs, “Abraxas”, as well as a thirty-minute “Strobelights and Martinis>Cyclone>Strobelights and Martinis” that left me standing by the stage for the first minute of set break, freaking out over what I had just seen. 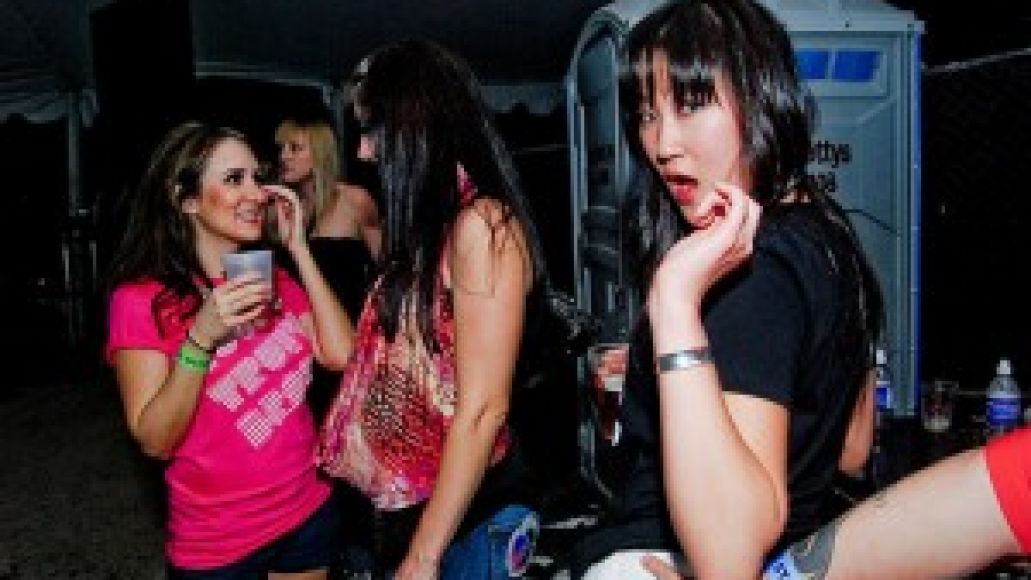 The first set ended with Brownie, the Biscuits’ lead singer/guitarist, telling the crowd they’d be back to play until the festival ended. Though I was looking forward to ending my night (by then early morning) with EOTO, a potentially five-hour long Biscuits set wasn’t something I could walk out on. When the band came back, they kept their promise; their second set, a little bit less danceable but just as enjoyable, went right into a half-hour long encore that brought the Biscuits’ playtime for the night to four-and-a-half hours, as opposed to the originally scheduled three-hour slot.

The Bisco encore ended at 5:20 a.m., giving me just enough time to run back to the beach stage and catch EOTO’s last half-hour. The crowd was thin, due to tDB’s surprise, but the duo was still rocking out. Everywhere I turned, there were people passed out: Bodies were on the grass, on the beach, on any available hard surface. The sun was up, it was 6 a.m., and I was satisfied.

PS. I got a ride home with a friend.

All photo support provided by Graham Meyer via FalseDigital.com

CoS at Starscape: From dusk 'til dawn...