The Wakarusa Music Festival has had its share of troubles since day one when it started out in Lawrence, Kansas. Harassment by the local police, rent hikes of 800%, and an unrealistic attendance cap that could have been doubled (if the locals realized what was good for their town’s economy) all plagued the small fest’s organizers. There was even a nearby college that should have meant longevity for this small event, but shady local politics kicked the organizers out. Luckily they managed to find a small private piece of land just south in Ozark, Arkansas. The land is already home to the Harvest Music Festival, and now it has welcomed Wakarusa with open arms. By all first impressions, it was a great choice.

Situated on top of Mulberry Mountain, the property features two permanent stages, the Main Stage and the smaller Backwoods Stage, in addition to two smaller tents. Surrounding the property are rivers and trails, leading you to a 20-foot waterfall and a swimming area following a 25-minute hike. What could make this even better? All the other fun of Wakarusa is back, but in a more compact area that’s not constantly patrolled by park police. The best new feature is that all the camping is situated around the stage areas eliminating any long commutes. By all accounts, organizers stepped things up this year found the home the festival needed. 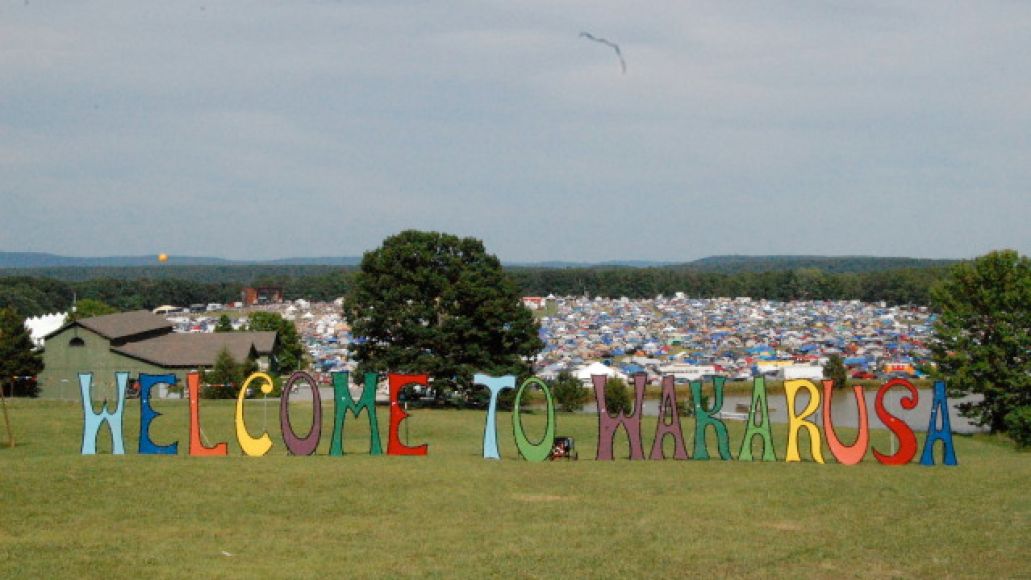 Unlike most four-day events, which don’t start Thursday’s music until later in the afternoon, things matriculated at the crack of noon with Cornmeal opening up the Main Stage for the first of two sets over the weekend. A cold front that passed through the day before kept the heat at bay as the dancing started up (it dipped into the ’40s that night). It’s never too early for bluegrass, especially for these festival favorites that ripped through songs with flip-flop kicking energy. It was great to see such a turn out for the early sets, especially in contrast with past years where the site felt empty until the evening acts. You could tell immediately that something was different. The energy and the enthusiasm was back and bigger than ever.

Over in the Revival tent, Joe Purdy provided some folk rock in the vein of Bob Dylan and The Dead. As a result, people spread out blankets and relaxed. Purdy is an imaginative folk singer with a love of folklore and John Henry, which provide his inspiration. The first half of his set was acoustic as he sang stories with a harmonica being the only other punctuation. For the last few songs, he brought out a band that helped him tear through his ’60s inspired rock, lighting a fire under his set.

Time flies when there’s live music around, and to help welcome the evening The New Mastersounds and Perpetual Groove kicked the jams into high gear. Trombone Shorty stopped by again this year to bring his New Orleans funk and soul to a bigger stage. The man is a true master of ceremonies as he worked the crowd into a frenzy showing off his trombone flavor with some serious power coming from the rest of his brass section. 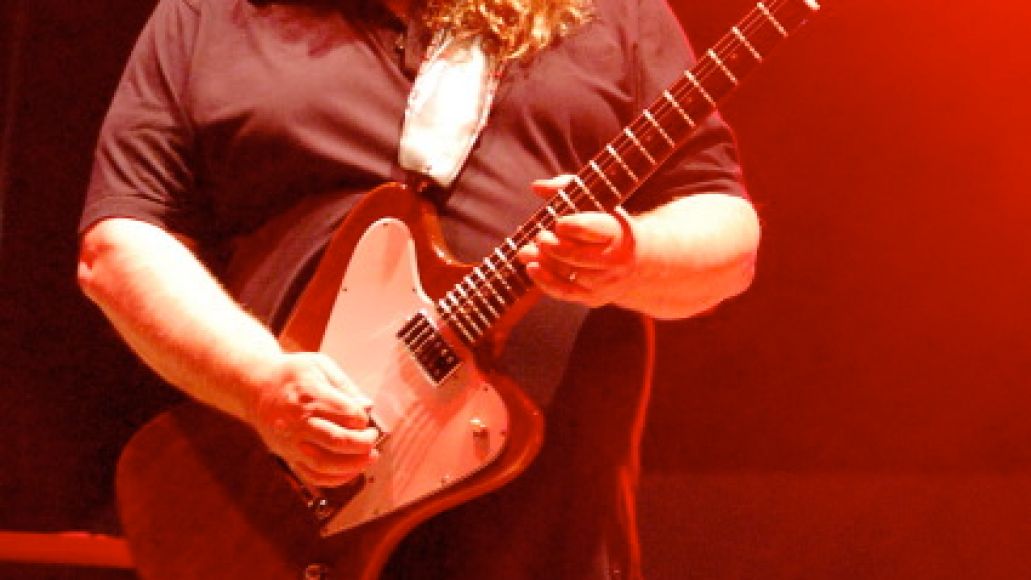 Thursday’s headliners, heirs to southern rock and festival kings, Gov’t Mule stopped by for a two-hour set. Naturally, the crowd went apeshit. After all, guitarist Warren Haynes is one of the hardest working men in rock today, touring with the likes of The Dead and The Allman Brothers. His heavy and intricate guitar work, paired with brutal drums, shook the old wooden stage, concerning few if any. Throughout the flawless set, Haynes ripped into note after note without showing any signs of tiring. What could have been a killer closer turned out to be the start of the night, and at one in the morning.

As part of the bill, the festival organized what they called, an Interstellar Meltdown. In other words, it was a late night of up and coming electronic acts and DJs. One of the more anticipated sets of the weekend, Pretty Lights mixed samples and original beats in a DJ Shadow kind of way. This was held in the other, smaller Outpost tent that was well over capacity both in people and glow-sticks. For those that couldn’t fit in, however, fan-created light shows were set up outside the tent. The free spirit attitude of the day was only magnified at night as body paint and costumes came out, stirring up the festivalgoers’ alter egos.

Late night wasn’t all about electronica. Also getting their late night groove on, Colorado Springs’ biggest export, Yonder Mountain String Band, kicked off a late night set with some signature rock ‘n’ roll fused bluegrass (Newgrass if you want to get specific). People came in troves, packing the tent for what would be a drug and whiskey fueled barn dance. The air was filled with dust and smoke as everyone hooted and hollered for more. Yonder delivered back, feeding off the energy, turning the set into a bluegrass revival. For some, it was a hell of a way to end a great first day. For others, it was only the beginning of a long night that wouldn’t end until the sun came up again.

Not too shabby for the first day.

Nights here at Mulberry Mountain are surprisingly cold, but it’s only temporary. When the sun comes up, so does the heat. That probably kills any hope for sleep that the late night party people had, but given it was only day two, there would be plenty of time for rest and relaxation later.

Musically, Friday would prove to be one of the better days with some of the bills’ top acts taking the stage. Thing started out with the funky surf jams of The Heavy Pets in the Outpost tent, and the country fried gypsy punk of Dirtfoot in the revival tent. Dirtfoot has begun to collect quite a following as a result of its rowdy live shows, and this time was no different bringing some backwoods country flavor to the fast paced, punk inspired tunes. The early afternoon also brought back Cornmeal, this time with a little help from Railroad Earth for a few songs. 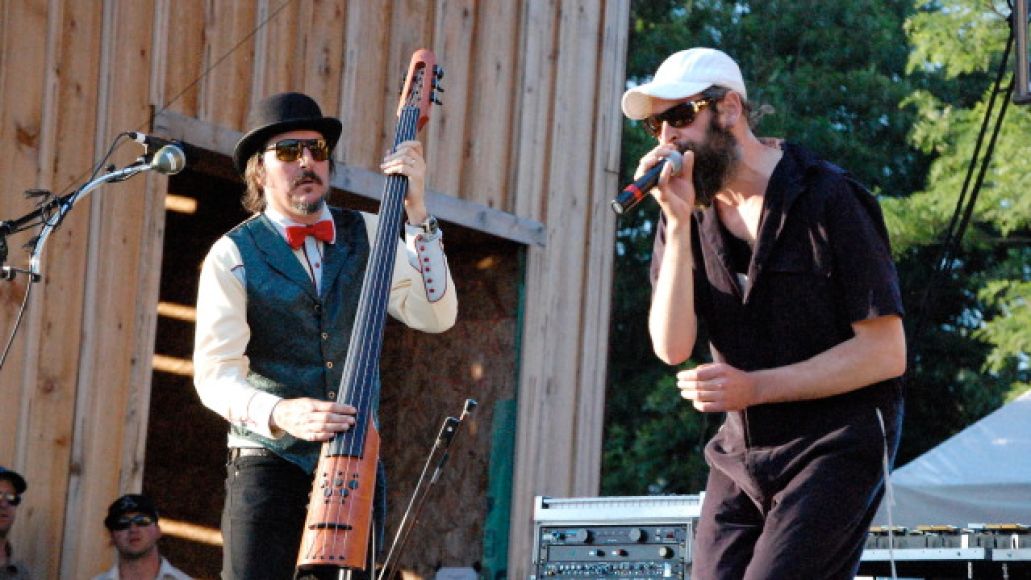 Every year, festival organizers invite some of indie rock’s up and comers to break up the jam bands and bluegrass that cover the line up. In the past, this has been everyone from Spoon to Dr. Dog, and Tilly and the Wall (even though they got rained out). This year was no different, you just had to look a little harder to find them. Wax Fang provided this break with their loud psychedelic southern rock, echoing whistles, and intricate solos. The show had lead guitarist Scott Carney jumping back and forth from power chords to a theremin while drummer Kevin Ratterman worked the keys and the kit at the same time. It was impressive to say the least, but still one that was missed by most. For those that did happen to stop in, they couldn’t stop talking them up all weekend.

On tour in support of his new record, out later this summer, Matisyahu stopped by for an early evening set that brought out reworked old favorites, as well as some new material. When compared to past shows, this was more instrumentally focused, featuring extended versions of “Youth” and “Jerusalem” which segued into what appears to be a slightly new direction for the man. Sadly, even though he was putting his all into the set, the audience seemed to be focused on something else. Matisyahu even commented, observing, “You guys are really quiet today.” What he meant to say was, “You guys want me to bring out Les Claypool?”  As his set drew to a close, people began to stream in and take spots for Col. Claypool. 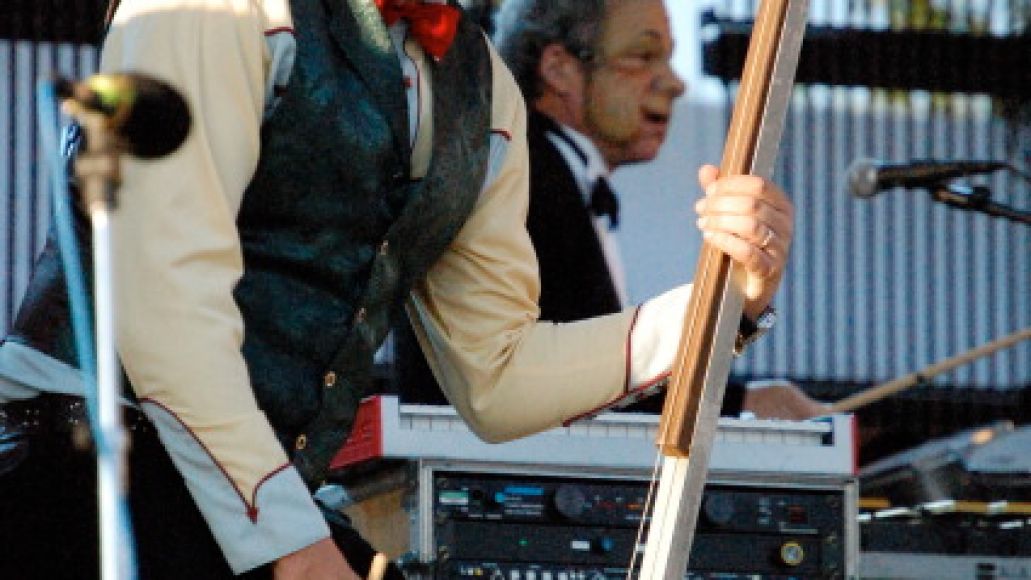 No matter what form Les Claypool arrives in, be it with the Frog Brigade, his Bucket of Bernie Brains, or just by himself, he manages to slap, strum, and pluck his way through an always mind blowing set. This time around he was backed by some friends on a cello, xylophone and two drum kits that would later go head to head with his earth rattling bass lines. Claypool broke out songs about battling intelligent fungus and other oddities from his mind, all brought to life by riffs that only he could muster. There will never be another musician like him, and his live sets only further his legend as every song sounds like something out of the Dr. Seuss books your parents wouldn’t let you read. While not wardrobe changes per say, he did break out his monkey mask and safari hat. Since the two are touring together, Matisyahu came out for a song, but it was over quickly as people just wanted Claypool.

Once the sun had gone down and the brisk cool air crept in, it was time for the night’s electronic acts to come out. Friday night was also host to a costume contest that saw almost everyone getting into some kind of character. Glowing fairies, a box of jellybeans, and Mario and Luigi all made appearances as thousands of glow sticks and other florescent objects were passed around. After some technical issues with the drum machine, The Egg took over the beats for electronic music that mixed house with catchy new wave hooks and vocoder-layered vocals. While musically the band was great, technical issues kept them from having a smooth flowing set. This, and the anticipation for one of the weekend most talked about bands slowly thinned the crowd as they left for the main stage.

Sound Tribe Sector 9 has been able to do what few bands have, and that is build a live empire that has enabled them to keep control of all their music. Their set at Waka fared no different as the field would be packed with moving, glowing bodies all surrounded by the music. The musicianship of this band has always been impressive as they’re able to play long, intricate sets that fuse trip-hop with jam rock for a bass pounding combination. Every time a key note would drop, the crowd would instantly respond like a studio audience at a sitcom taping. Fans set off fireworks during the huge climaxes, adding to the now literal musical explosion. Even though they were billed for another late night set on Saturday, their Friday night show easily became one of the weekend’s best. 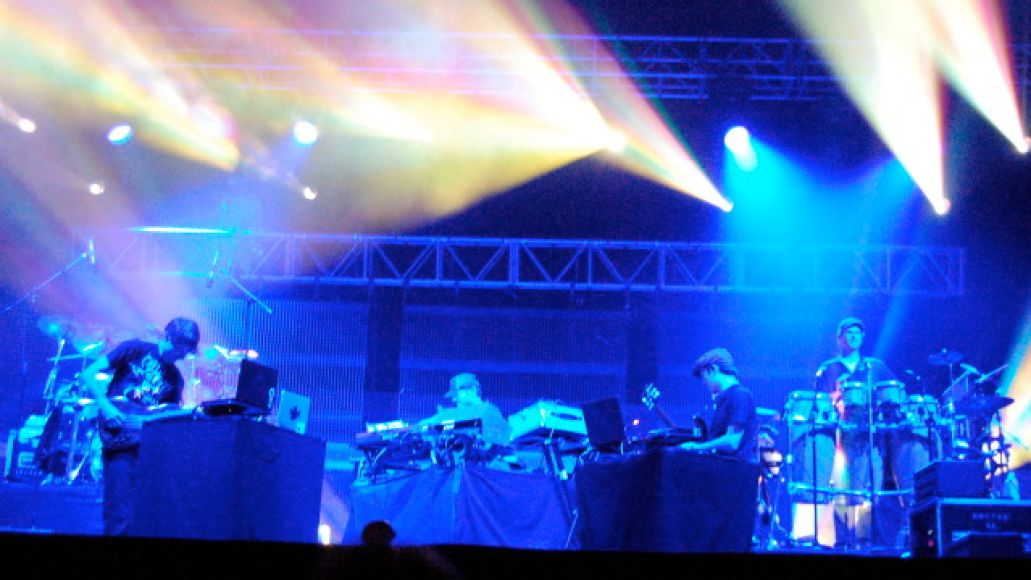 As for the rest of the night, the music by no means stopped there. It would go right on through to daybreak again with 20/20 Soundsytem, EOTO, Galactic and Perpetual Groove leading through. It’s a weird sensation waking up at 6 a.m. with the bass from the Outpost tent still running strong, but as the old saying goes, “If you can’t beat’em, join’em.” 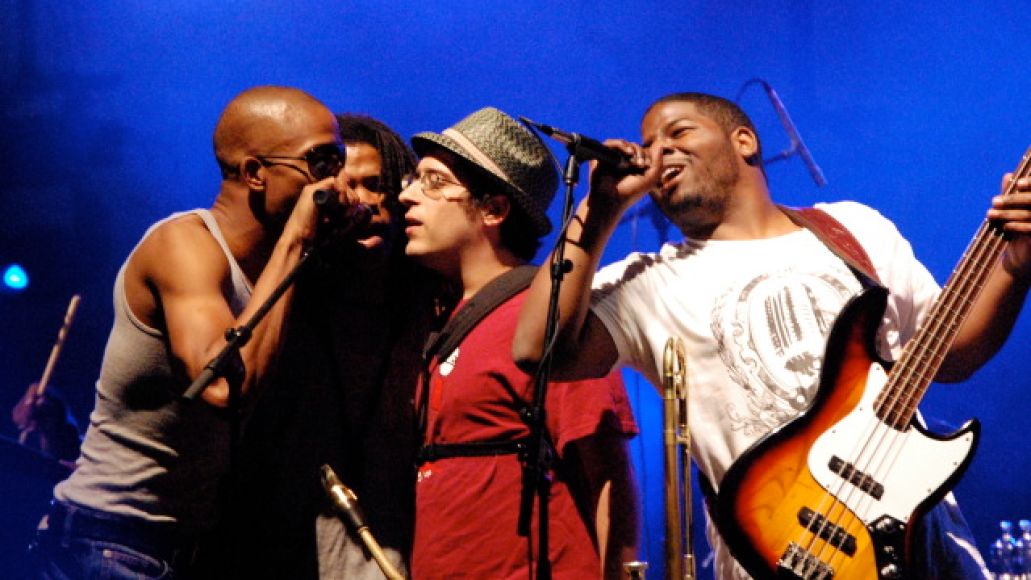 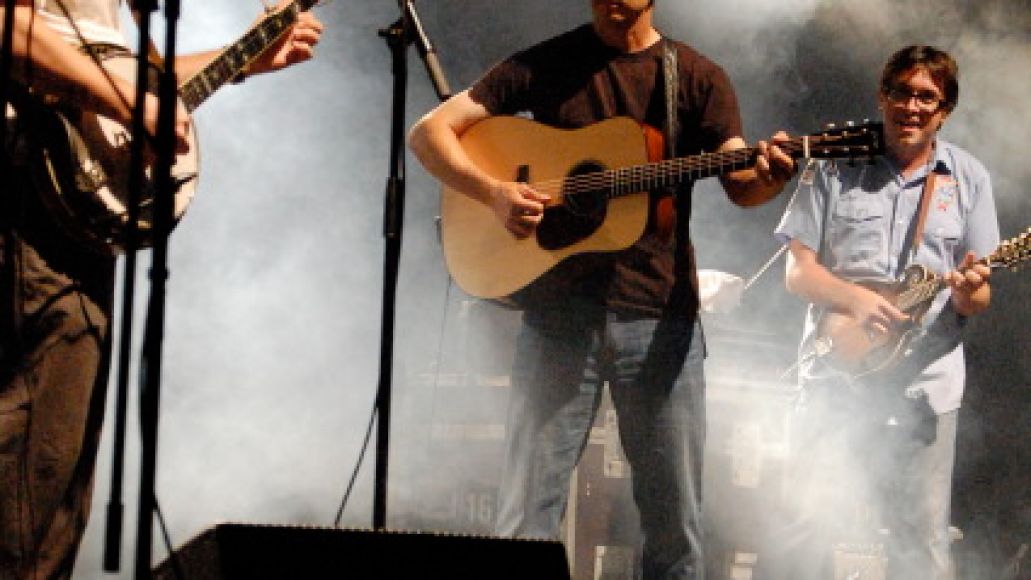 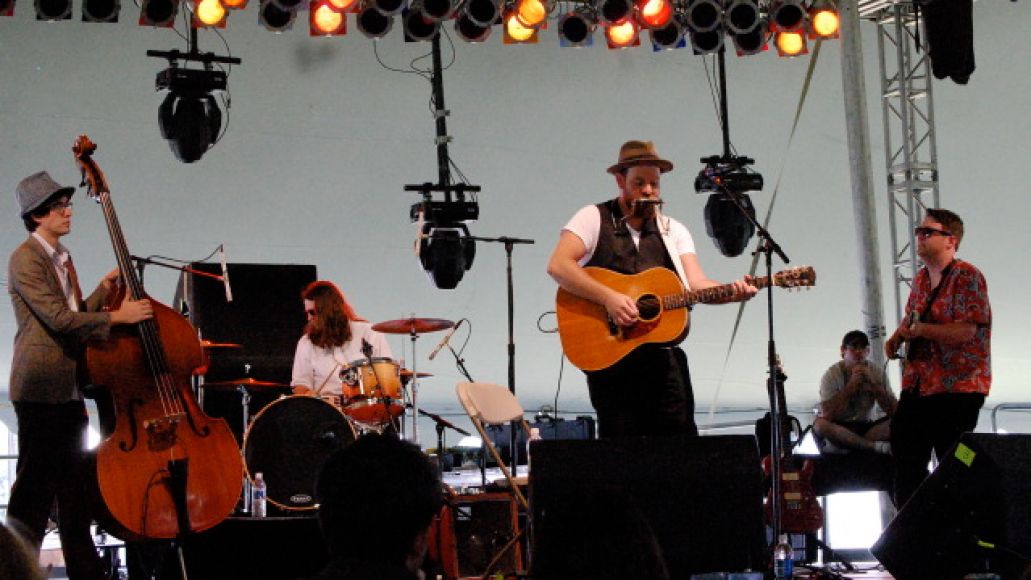 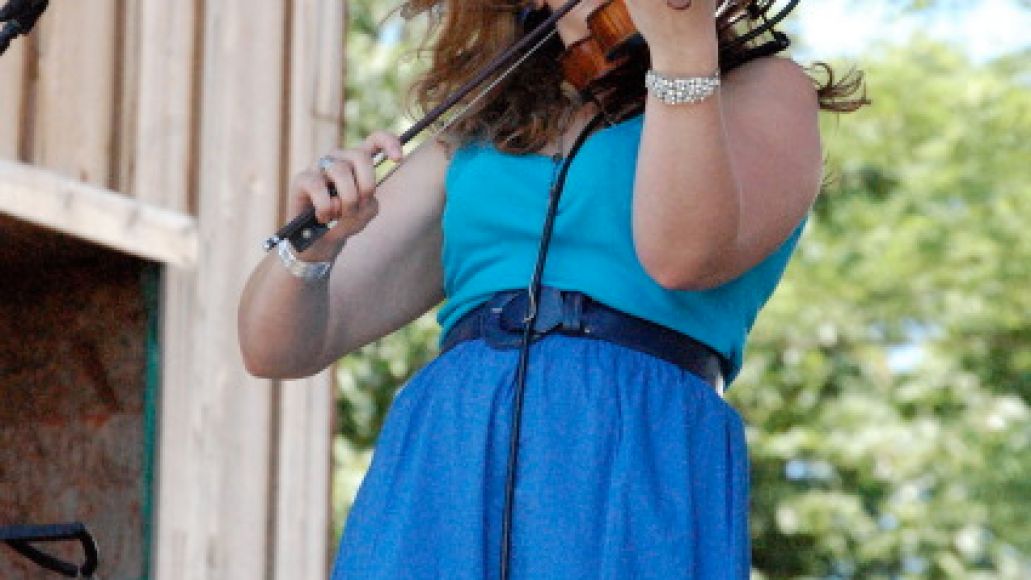 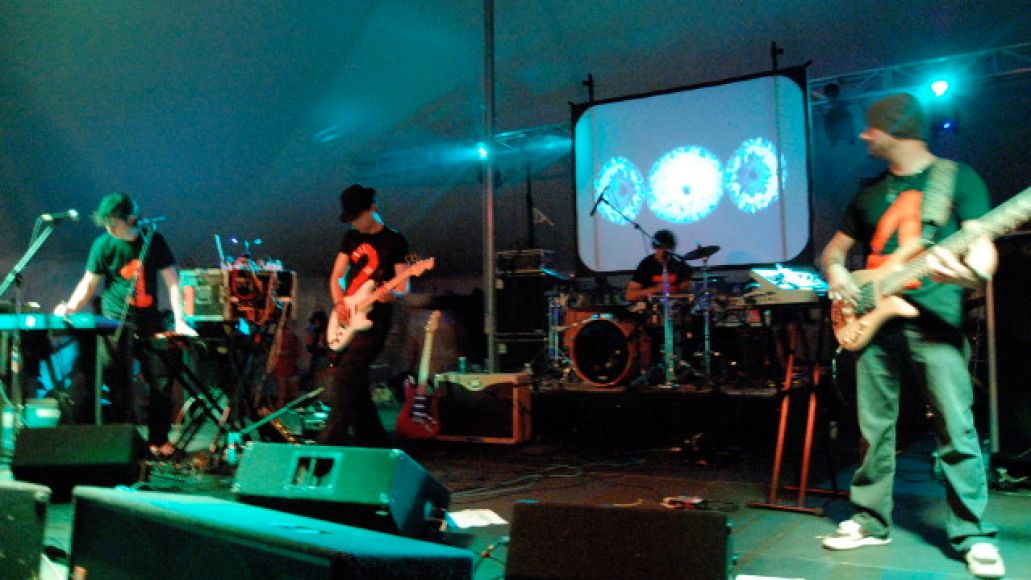