What is there to say about Mike Judge’s magnum opus, Beavis and Butt-head?  Everything has been thrown at these two obnoxious yet addictive animated metal heads. Spawned from MTV’s prime-time cartoon sludge fest Liquid Television (of Aeon Flux and Milton fame), characters Beavis and Butt-head were pegged as controversial by many, though lauded as idiot savants by a whole generation… and more! Even Patrick Stewart liked them, and in the mid-90s the two Highland,TX morons amassed a large following and in turn a 1996 feature film, Beavis and Butt-head Do America.

To clarify, Judge began with two animated shorts, the rambunctious duo that is Beavis and Butt-head and the lonely yet rattled Milton. By sheer coincidence, the pseudo-geniuses in music video critique became the basis for an entire series riddled with fart flames, head banging and rather cruel outlooks on ’80s bands, all glazed over with basic crude humor that hallmarked our nation’s “benevolent” youth. While Judge may be remembered now for his cult classic hit Office Space, or his longest running victory, King of the Hill, it’s the success of Beavis and Butt-head that allotted Judge these pop-culture marvels. So, what about …Do America? 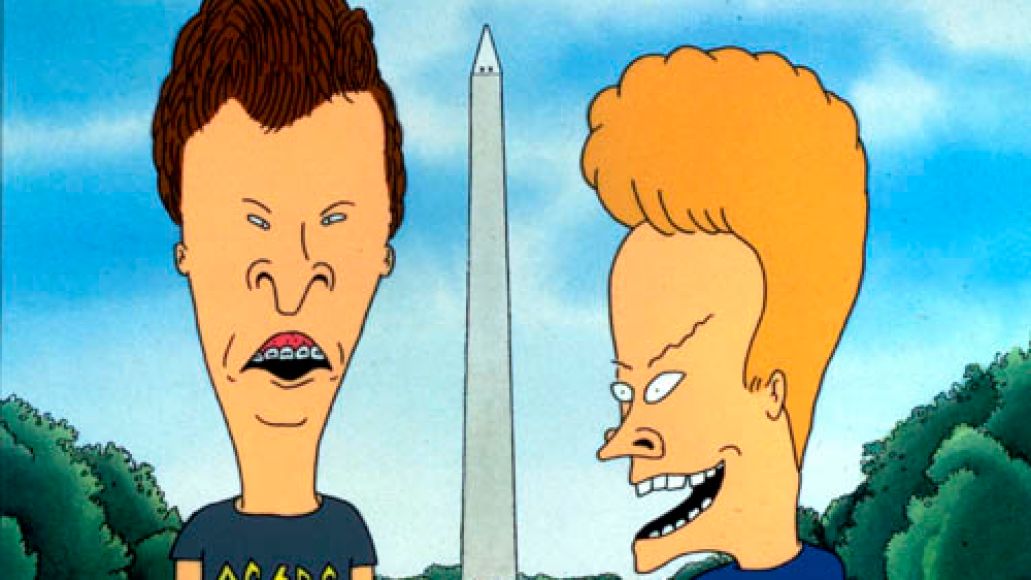 The animated film was probably the last thing anyone expected to receive praise by Siskel & Ebert, but lo and behold the critics gave many positive reviews. And while it cost about five million to make (pocket change nowadays), …Do America grossed over $60 million dollars for its domestic box office run, a feat attributed to timing as the height of Beavis and Butt-head‘s popularity only dwindled shortly thereafter. Though, in the moments before Judge’s creation found its grave, this movie became a pop culture icon cementing a laundry list of beyond stupid catchphrases like “Come to Butt-head!” or “I am Cornholio” into our feeble teen minds. The duo who shunned “wussy” bands like Winger or Poison and hailed both Metallica and Radiohead were given their own big screen debut, so one had to wonder what to expect from their corresponding soundtrack?

Turns out this album is essentially the love child of late ’90s alternative and Beavis and Butt-head-approved metal, only with a little comic relief for good measure — a perfect mix for such a confused yet brilliant decade. The on-screen duo get the ’70s buddy cop treatment with the late Issac Hayes turning their TV show theme song into the “Theme From Shaft”‘s evil twin, and it’s all aptly titled, “Two Cool Dudes”. This is perceived by some as foreshadowing of Hayes’s later animated dealings, most specifically, his portrayal of Chef on South Park. Though as popular the Academy Award-winning composer was, he couldn’t compete with the album’s most popular track, the Red Hot Chili Peppers’ envisioning of The Ohio Players tune, “Love Rollercoaster”. It was the first official single and remains an alternative radio staple with Flea’s infectious funk bass and Keidis’ muffled rap verses. It also became a favorite video on MTV2 featuring the band as animated theme park attendees/daredevils, naturally interspersed with footage from the movie (namely Beavis and Butt-head dancing in Las Vegas).

Switching gears (and genres), “Ain’t Nobody” by LL Cool J was the second single off the record, but unfortunately only charted at #46 in the States. For nostalgic fans, the song holds steady, but on the whole it feels out of place amidst the funk, punk and metal. Yes, the metal. Anyone who has actually seen this movie remembers Beavis’s desert hallucination vividly (noted by The Nostalgia Critic as #5 on his Top 11 Nostalgic Mindfucks countdown), and the ensuing sonic mayhem, as well.

Inspired by Rob Zombie’s artwork and played in sync to White Zombie’s “Ratfinks, Suicide Tanks & Cannibal Girls”, the imagery results from Beavis eating a cactus. The song itself makes for the soundtrack’s heaviest metal performance, second and third easily being AC/DC’s “Gone Shootin'” and Rancid ft. Stubborn All-Stars’ “I Wanna Riot”, respectively. Known as the final recording by White Zombie, as it hit streets around the release of Rob Zombie’s Hellbilly Deluxe, this segment of the film pays homage to Beavis and Butt-head’s critic days with Beavis claiming what he sees is “like a music video!” – and for the most part, he is right on the money.

Another interesting last (as well as first) is the track “Walk On Water” by none other than Ozzy Osbourne. While the demo was featured in the film, this polished studio version boasts the only performance of guitarist Joe Holmes on an Osbourne studio recording (though he was schooled by the late Randy Rhoads and co-wrote three tracks on Down To Earth before leaving the band). While not the best of the tracks in the Osbourne catalog, the notoriety it brings to this soundtrack leaves much to aspire towards, especially alongside White Zombie’s courteous donation.

Onto ’90s territory, we have the presence of some old school No Doubt (you know, before Stefani became the second coming of Cyndi Lauper?) and Butthole Surfers. In a similar fashion to Filter, Butthole Surfers have the one song everyone knows (“Pepper”), and a healthy dose of soundtrack appearances (MI:2, Romeo & Juliet, etc.). While Filter might have been much more successful in the long run, a Butthole Surfers song by band name alone is almost a necessity on the …Do America OST, and thus we 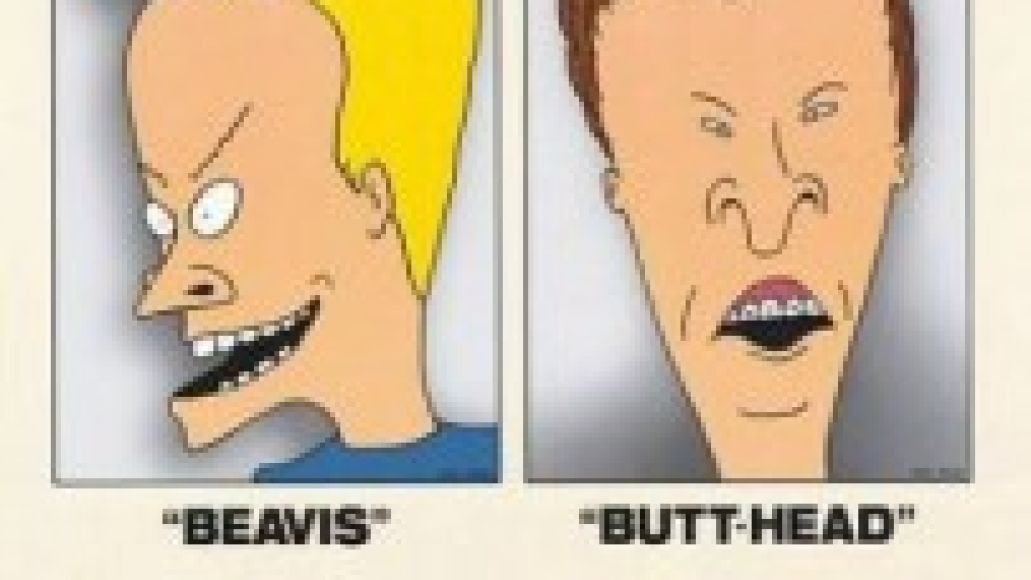 get “The Lord Is A Monkey (Rock Version)” thrown in for good measure. A bit bizarre to the point of mimicking White Zombie in some aspects, this psychotropic sound scape fits well amongst the wickedness that is Beavis and Butt-head.

Complementing the funkier Red Hot Chili Peppers we get No Doubt’s “Snakes”, which rather than scoring two slackers, actually belongs in a strip club. In fact, the animators should have put in a deleted stripper scene specifically for this song, because the lyrics by themselves are only made more provocative with Stefani’s sexy vocals and the occasional wails (“Open the basket/listen to the flute play”). While it might have taken some practice to get the dancer’s rhythm on point, boy would that have been so worth it. Where the hell is Jessica Rabbit when you really need her?

Closing out this twisted joyride of musical gene splicing (perhaps “genre splicing”), we have a song covered by Engelbert Humperdinck entitled “Lesbian Seagull”, which is played by Beavis and Butt-head’s hippy school teacher during an FBI raid, and later during the end credits by Humperdinck himself. This acts as the album’s comic relief next to Hayes’s theme song interpretation, but even more, because it’s absolutely random by all accounts. It neither adds or takes away from the film, but if they had to pick a song for the hippy teacher’s “Kumbayah” moment I suppose this is as good a satirical jab as any.

Suffice it to say that in this site’s eyes, Beavis and Butt-head Do America was Mike Judge’s crowning achievement, surpassed only by Office Space for no other reason than the “O” face. Granted, …Do America was only as successful as the TV series allowed it to be, but let’s consider the name players involved, both musically or otherwise. It’s a rag tag team of Demi Moore, Bruce Willis and even the guy fromUnsolved Mysteries (Robert Stack, for those uninformed) — all of them had voices slapped to this very vulgar film. Nobody had seen such a transition from TV to film, at least not animated. In some respects, it was very influential on South Park’s Bigger, Longer, and Uncut, only Judge lacks that musical background that both Trey Parker and Matt Stone pride themselves in. Nevertheless, the soundtrack here, and the enormity of the bands present on it, is more than enough to make you want to go: “Come to Butt-head”. 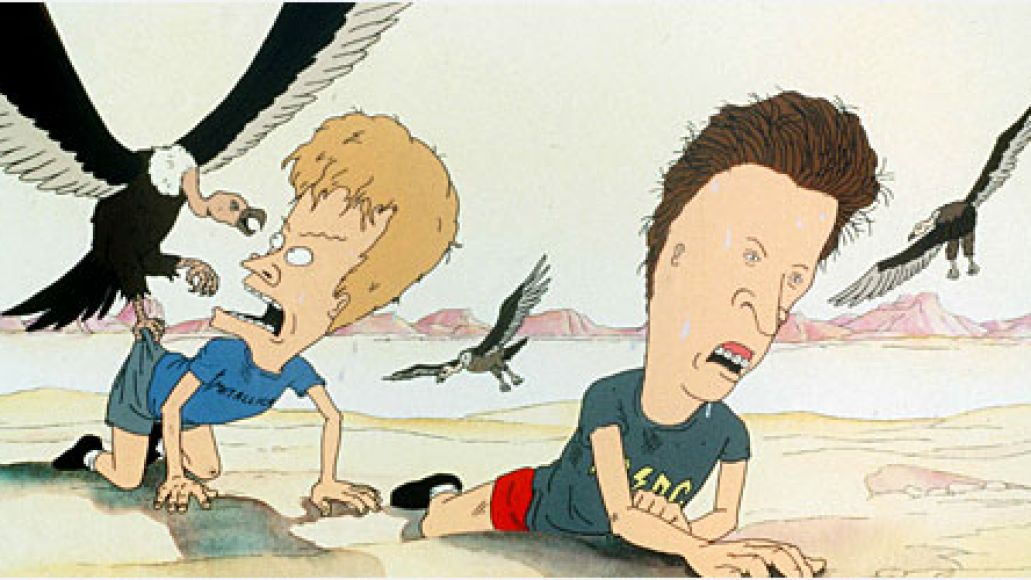 This isn’t the only Beavis and Butthead-endorsed album. Before this, there was a little collection called The Beavis and Butt-head Experience, which featured prominently heavy metal bands praised by the cartoon duo. Though this album was exceptionally better in terms of simple compilation novelty, the soundtrack of Beavis and Butt-head Do America has something for almost anyone — and even if your only initial reason for buying this soundtrack was “Love Rollercoaster”, chances are you kept it because of the other stellar tunes to follow (kind of like buying the Coneheads OST simply for “Soul To Squeeze”).  Above all else, this throwback to the ’90s is novelty but on a higher echelon of such, as it reminds us that at one time or another we all thought Cornholio was hilarious.