Chicago seems to want hundreds of music festivals. As if all the neighborhood fests, Pitchfork and Lollapalooza hadn’t wiped us Chicagoans out (both physically and economically) enough already, let’s throw in the Green Music Fest. Held in West Town’s Eckhart Park, and with Art Brut topping the lineup, the new festival is a worthy addition to the rogues gallery of music ventures here in the Windy City.

Unfortunately, the weather this past weekend wasn’t all that cooperative. Arriving early Saturday afternoon, the heat hung oppressively, driving most of the crowd to the far-away shade, leaving a sparse audience to say the least. Nonetheless, Chicago native and 90’s alt-rock revivalists Sybris completely crushed their set. Their PJ Harvey meets Rilo Kiley meets a little arty grunge soared over the large, largely open field. Vocalist Angela Mullenhour’s forceful (yet somehow also gossamer) howls on “Something About a Darkhorse or Whatever” (from 2008’s woefully overlooked Into the Trees) ached with sinew. 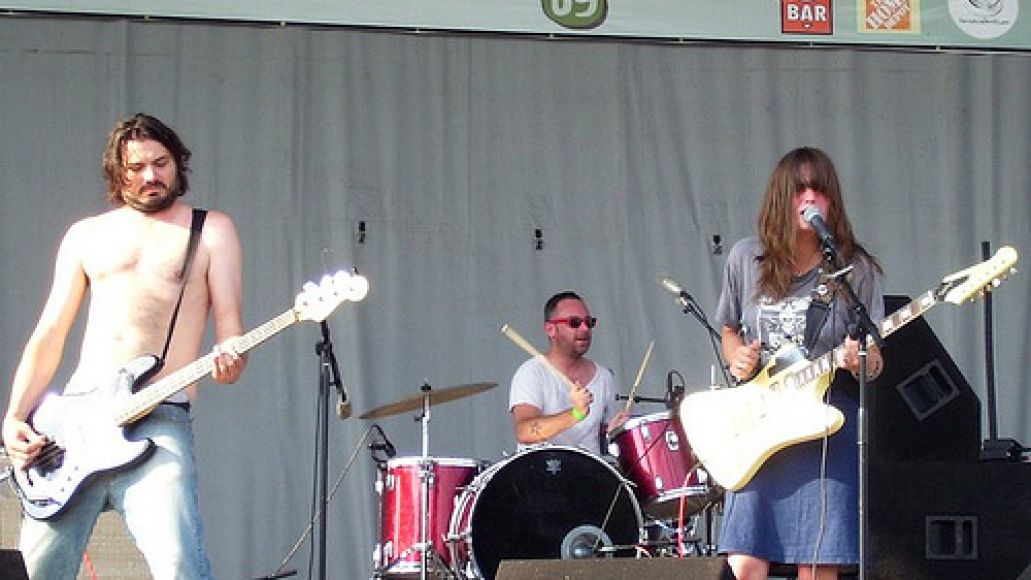 Whether it was lines like “Oh man! I want some shade!” or playful banter like “Thanks to Mother Earth!” Mullenhour and co kept things entirely and impressively plainspoken and frank. The music unpretentious and powerful, the vocals sincere and majestic.

A treat for those who find the trash-wreckage left behind after music festivals, Chicago’s Green Music Fest boasted plenty of eco-friendly details. Rather than rely on the ‘green’ buzz, the park featured green vendors, green info booths (including Working Bike Co-op‘s awesome, bike-powered blender and globe-spinner ), bio-degradable beer cups, and more. 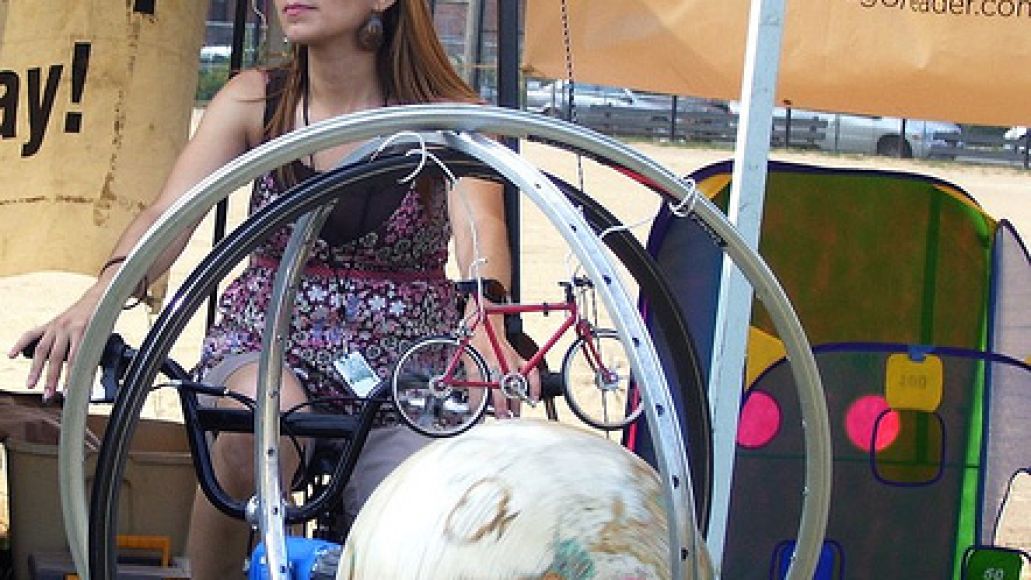 Maritime and their bro-y take on Smoking Popes/Modest Mouse were on stage next, and the crowd swelled a little bit. This could partially be due to the fact that the group formed from the pieces left over after The Dismemberment Plan and The Promise Ring fell apart (some Promise Ring requests were shouted), but there were also clearly plenty of plain-old Maritime fans. Opening with “For Science Fiction” helped, certainly; the jangly, carousing guitar and upbeat tempo provided some bland fun.

Rollicking “Guns of Navarone” and the bob-able “German Engineering” wound up at about the same routine. That is to say, none of it was obnoxious. That couldn’t really be said for sort-of-legend(guitarist/vocalist for Promise Ring, Cap‘n Jazz and Vermont before this) Davey von Bohlen’s stage presence. Whether it was the sometimes-backward baseball cap, the khaki cargo shorts or the repeated insistence that it was so hard to party hard all the time, he didn’t win me over.

After a quick (and well-deserved) Slurpee break, I returned just in time for Minneapolis’ own Tapes ‘n Tapes. After the hugely successful The Loon (released way back in 2005), the group kind of hurtled off the indie map. 2008’s Walk It Off didn’t do a whole lot to bring them back (despite its sale at Urban Outfitters), but a few more performances like this one certainly wouldn’t hurt. 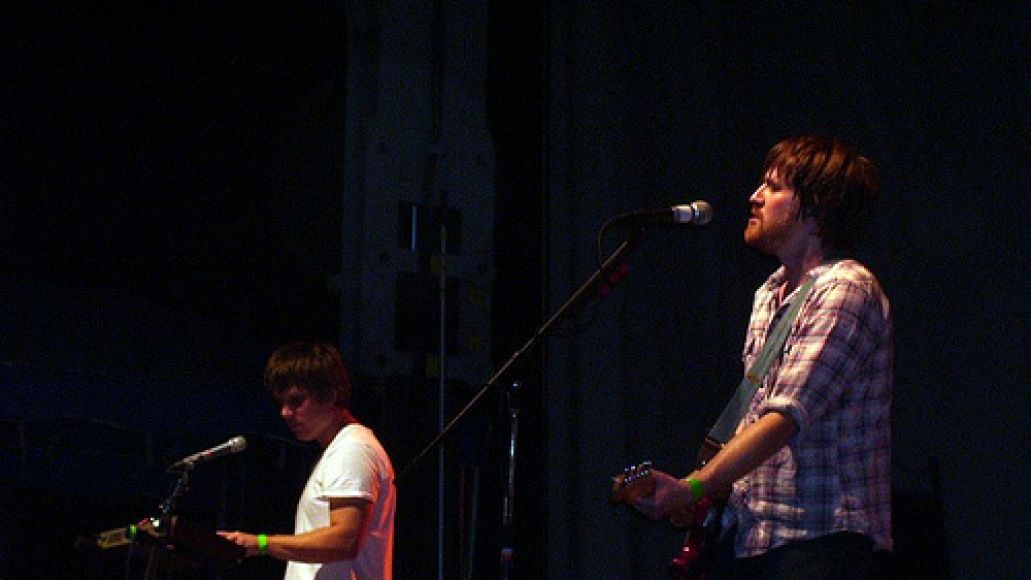 The now old (how crazy is that?!) “Just Drums” and “Cowbell” sounded as fresh and charging and full of Pixies/Pavement influence as they ever did. Plus, the newer stuff sounded just as good, particularly Walk It Off standouts “Hang Them All” and “The Dirty Dirty”. But, after realizing they had just a few minutes left, the group charged into “Insistor”, which seemed to be what the now-huge crowd had come to see.

The environmentally conscientious crowd grew even larger for England post-punkers/headliners for the night, Art Brut. After a quick run-through of “Bang Bang Rock ‘n Roll”, vocalist Eddie Argos brought his signature charm out for display. “So, Chicago, I think we live here now,” he smirked, referring to the several times the band has stopped in town over the last year. Non-descript, yet incredibly fun renditions of “My Little Brother” and “Alcoholics Unanimous” followed, before Argos revealed a potential danger: “I keep getting massive electric shocks from the microphone,” he warbled. “Is that a problem?” But, instead of shutting things down and being careful, Argos kept the charm flowing. “Massive rush, Art Brut!” Argos shouted, as guitarists Ian Catskilkin and Jasper Future pummeled into “What A Rush”.

The elastic, energized, extended version of “Modern Art” found Argos jumping through the middle of the crowd, explaining his love of Van Gogh, “rocking out” at the museum and discussing how Van Gogh would have totally painted a picture of the Chicago Green Fest if he would have imagined its existence. But, as with all Art Brut shows, the mighty, tight music isn’t the pull (it’s always great, seldom different). It’s Argos’ theatrics and wit that keep you coming. “Next time we play a green festival, I can just recycle an old set,” Argos jeered. 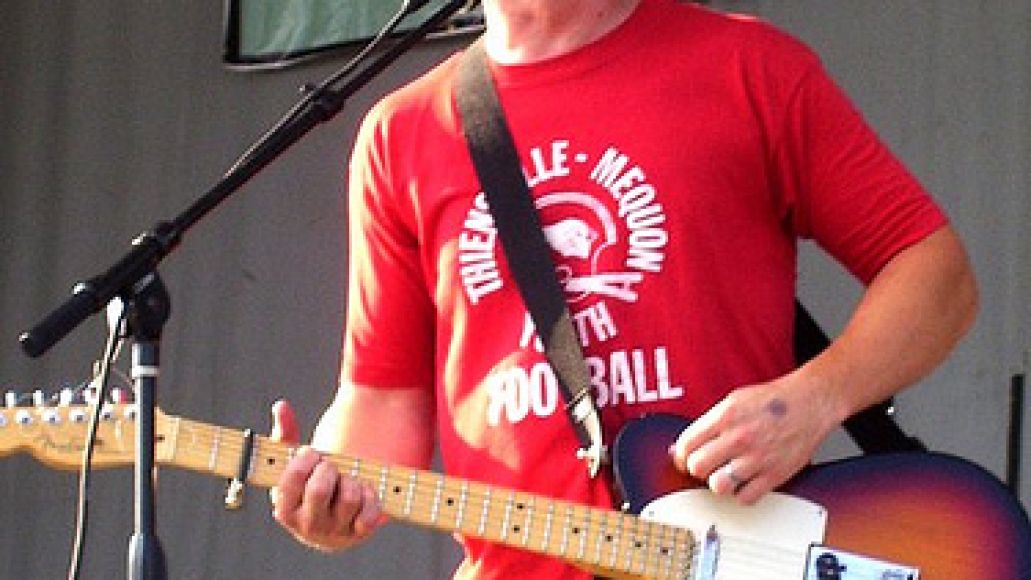 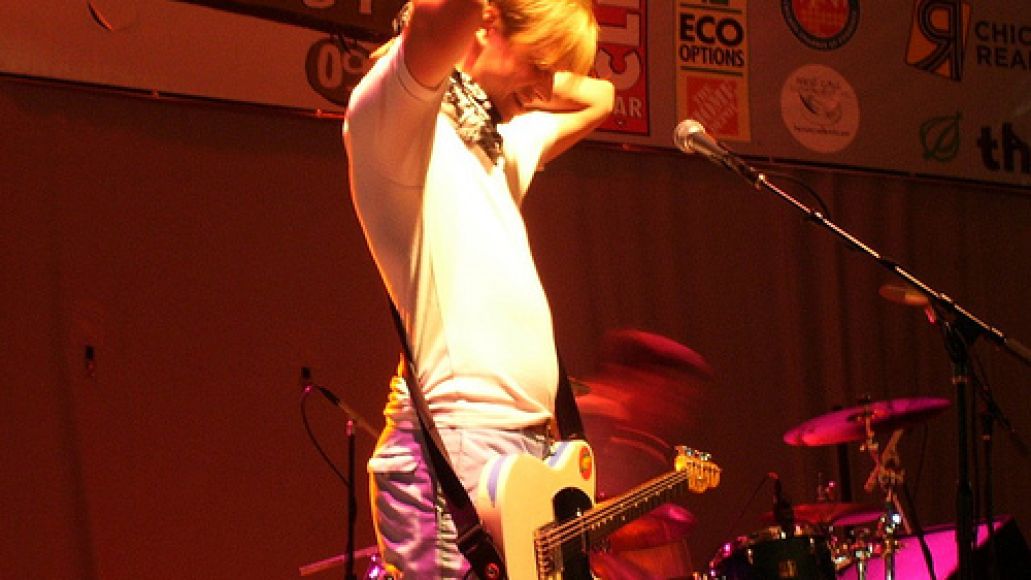 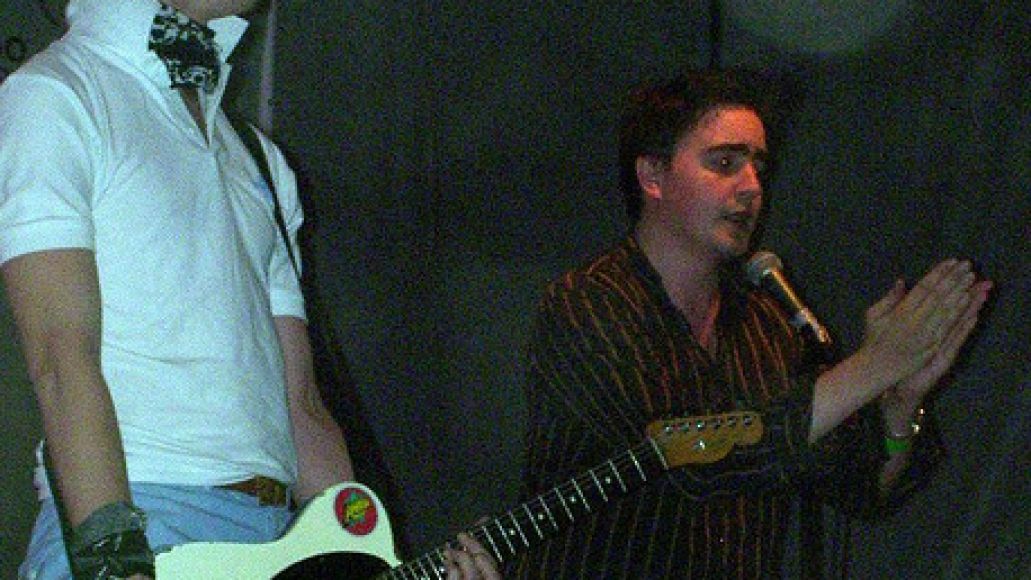