On a rainy Saturday night in the Windy City, anything goes. Whether the clock decides to slow itself down or people contemplate searching for excitement, everything on the weekend is all or nothing. It’s interesting to note that regardless of wherever you go in the great city of Chicago, there’s tons of nooks and crannies that the naked eye can miss from time to time. Case in point, tucked away in the heart of Wicker Park, the AAA Space exists in plain sight, but from the looks of it on the outside, you’d think it was just another factory or storage facility. This couldn’t have been farther from the truth however. Inside this glorious little brick building houses one of the city’s most intimate areas for a live show. There you have it, on what would be normally a typical Saturday night, you have a great venue for live music tucked away in an artsy part of the city. The real kicker here however is this. Chicago punk rock legends Naked Raygun took grasp of this tiny venue and kicked off the preparations for this year’s installment of Riot Fest. While the fest itself isn’t until October, Naked Raygun blew the rust off the doors with its secret show and put on one of the most kick ass rock concerts this side of Lake Michigan.

From the get-go, people left and right quickly got down to getting sauced. Since Red Bull seemed to be somewhat sponsoring this nifty little punk rock party, the hardcore stimulant as well as beer became the liquid choices for the evening amongst the Chicago faithful. After a lengthy and lazy amount of time passing throughout the red-lighted abode, the Chicago quartet themselves walked through the crowd and hopped onstage for an impromptu soundcheck. Frontman Jeff Pezzati seemed to carry a determined look on his face throughout the band’s setting up whereas bassist Pierre Kezdy gave a jovial smile whilst setting up his killer bass. After all the sparks were set to go, guitarist Bill Stephens ripped into the crowd favorite, “Home Of The Brave” and the quartet took off flying. Landing gear was far beyond tucked away as these punk rock patriarchs scorched the Space from Chord One.

The band then launched a sonic assault with “The Strip”, “Meta” and a brand new tune called “Mein Iron Maiden”. Frontman Pezzati commented jokingly that the song wasn’t referring “to that old rock band.” Nevertheless, the new material sounded badass and proved to be a worthy glimpse into the quartet’s new musical directions: one part raw Stephens’ guitar and Pezzati’s sarcastic, melodic vocals leading the way. As they say, things got real shortly afterwards with the band ripping apart classics “Dog At Large” and “Hips Swingin'”. By this point, the Red Bull and beer settled with the Chicago crowd and inevitably kicked into high gear. Mosh pits broke out in the front of the stage and it felt like 1985 all over again for these guys (save for that Ronald Reagan guy being President). Pezzati quipped with the audience afterward, “Do you remember the 80’s? We were all making money back then. Any requests?” Some people yelled and prodded and yelled some more for their hometown heroes to make some fucked up noise, but Raygun could do no wrong. Drummer Eric Spicer rolled on those toms, Pezzati took over rhythm guitar duties and launched into the creepy, yet elegantly beautiful “Peacemaker”. A hush fell over the crowd and Mr. Keil and I were in awe of Raygun’s raw power flowing from the stage. “Peacemaker” quickly proved to be one of the highlights of the night and it proved again once and for all, no matter how old you are, good music never dies. 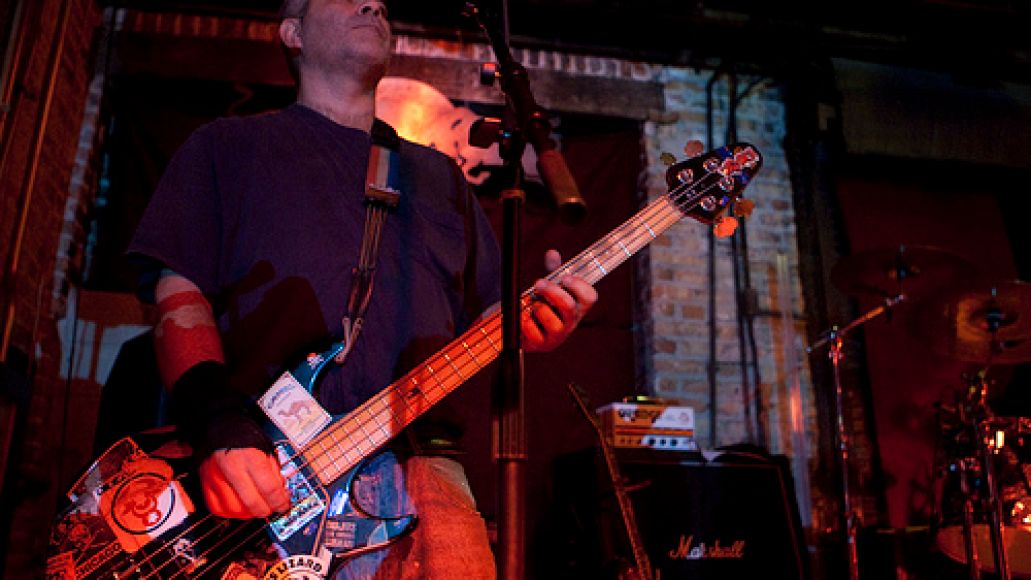 Firebomb after firebomb of punk rock perfection landed on the Chicago crowds heads. Frenzied madness intertwined with youthful aggression certainly made themselves highly apparent throughout the night. The crowd as of average age honestly would’ve had to be roughly about mid-thirties or so, but it didn’t matter as everyone felt like kids again. With a trailblaze of “Gear”, “Entrapment” and “Home”, Naked Raygun certainly possessed gobs of energy, and after all these years, their charisma shone through as well.

The highlight of the night by far after countless audience members barked it like drunken pirates, the quartet launched into a brutal assault with “Rat Patrol”. At this point, the pits and pendulums were swinging no doubt. When Raygun launched “Rat Patrol”, the entire show went to eleven. Stage diving, bigger pits, bigger smiles, bigger laughs and deafening cheers rallied around the venue. “Rat Patrol” scored and it scored big time. With that slowly fading away, Naked Raygun parted from the stage, but not before the crowd sang in unison for the group to return. Sure enough they did and kicked it up a notch with a great cover of The Buzzcocks’ classic “Ever Fallen In Love (With Someone You Shouldn’t’ve?)”. Somewhere Buzzcocks guitarist Pete Shelly is smiling with glee. Whatever it was, it sounded great and the Chicago fans ate it up. 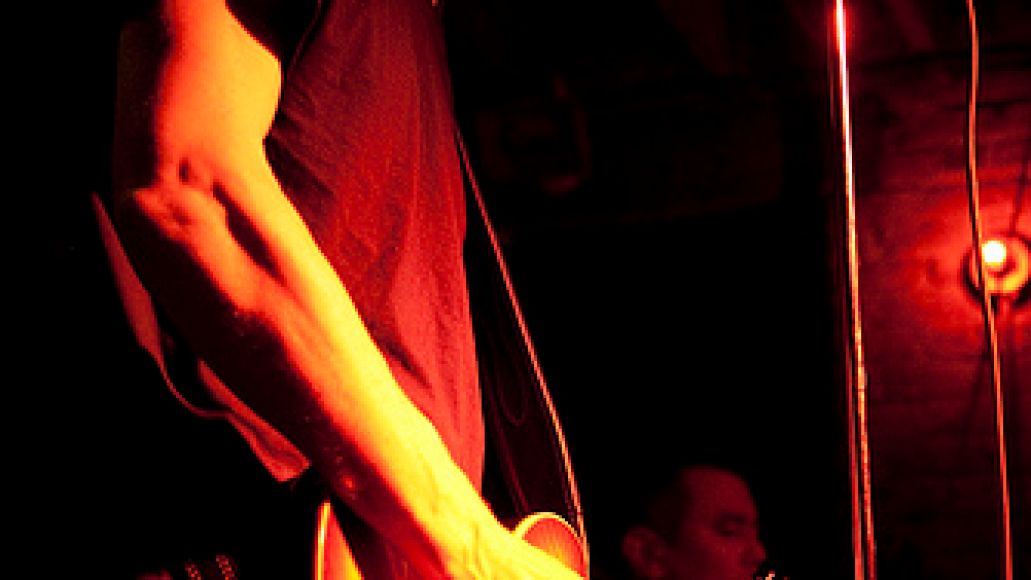 The band departed for a second time, but the Chicago faithful wanted one more taste… one more bullet from the gun so to speak. For the second and final encore, bassist Kezdy came back onstage with his shirt off. The crowd went nuts and laughed their knickers off. Kezdy then responded, “My wife says to put it back on. It’s because I’m too sexy.” Immediately the crowd chanted “Keep it off! Keep it off!” and like most bands do, Kezdy gave the crowd what they wanted; some sexiness. Raygun then ended their colossal set with a one-two punch of a blistering version of “Knock Me Down” and a devastating twister of “Surf Combat”. Needless to say, they gave it their all and what an all it was. For the final time, Naked Raygun bid farewell to the city that bred them and loved them for over the last twenty years.

The times may be different now, but the music never dies. That’s what tonight’s show seemed to be all about. These guys after all these years still have tons of fun playing simple, aggressive punk rock. As long as there’s an audience to enjoy it, the rest will take care of itself. It’s great to finally have a slice of the old days back in a new modern world. It’s sort of like using an old compass to steer a new ship upon the ocean. Whatever the hell that means, it doesn’t matter. All that matters is that Naked Raygun kicked a ton of ass, made a ton of people happy and proved they can still bring the shake. I’ll be first in line for the new record without a doubt, but you bet if these guys ever crawl around here again, I’ll be there on a rainy, Saturday night, tucked away in the nooks and crannies somewhere in the city of Chicago. 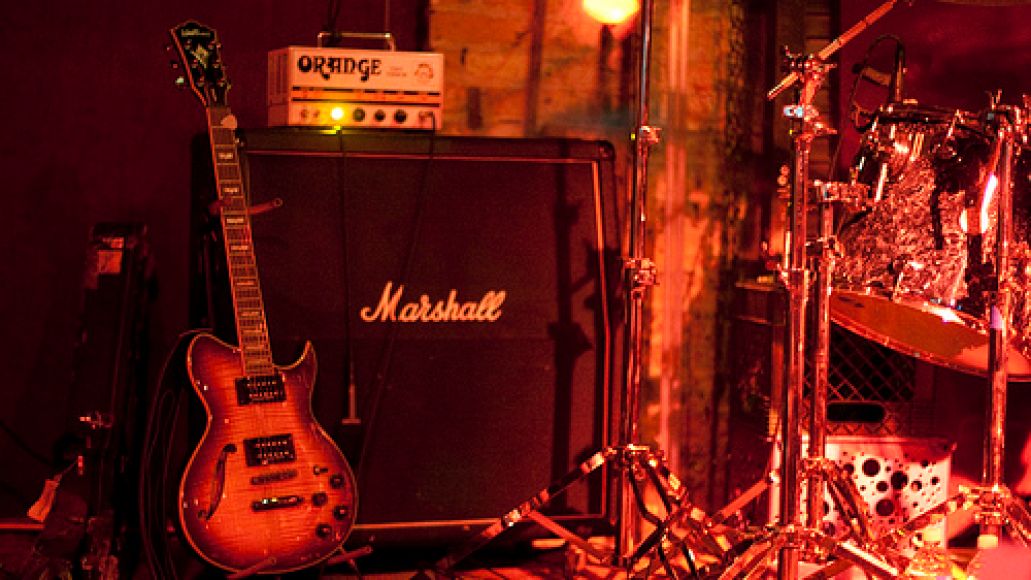 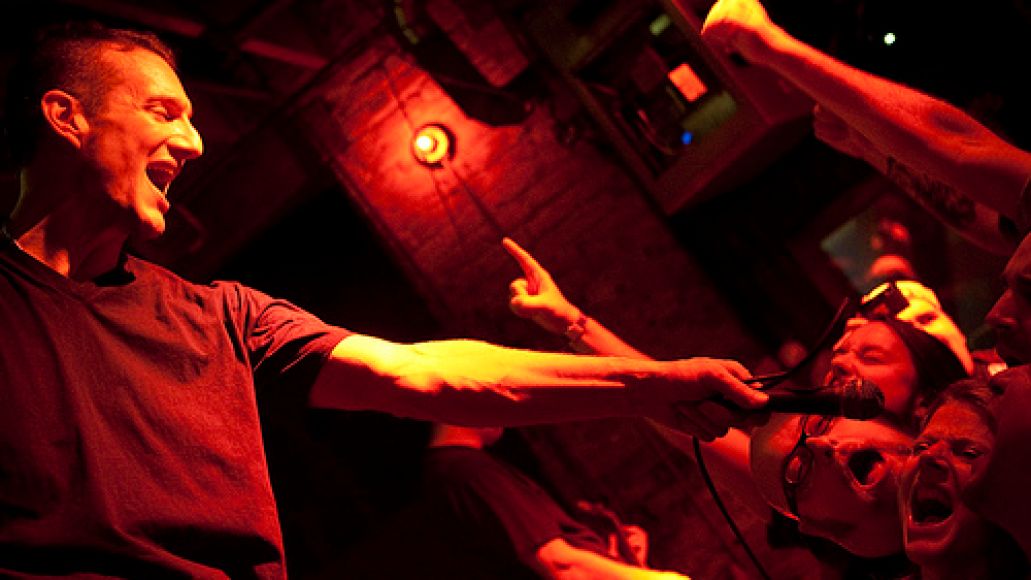 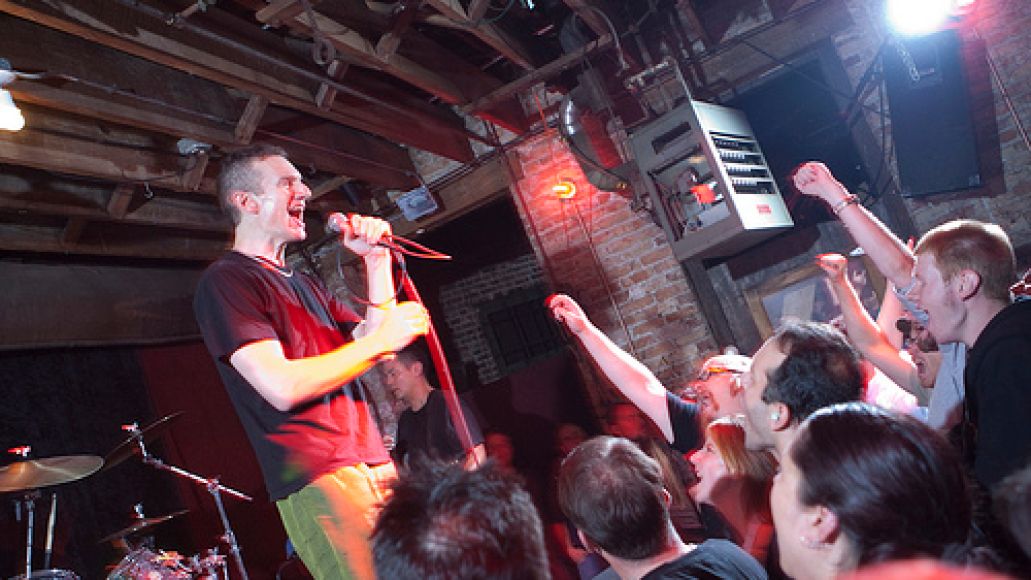 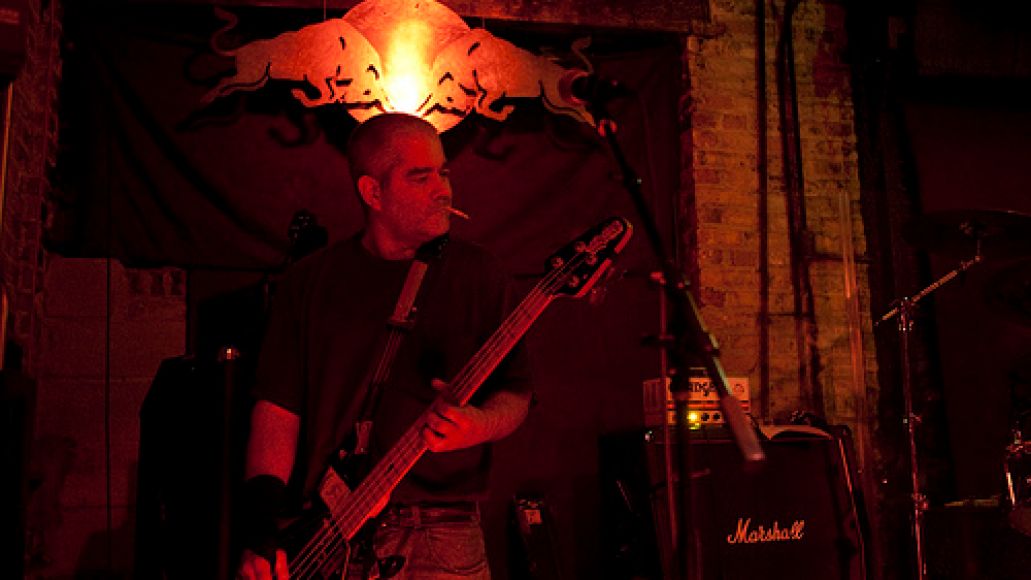 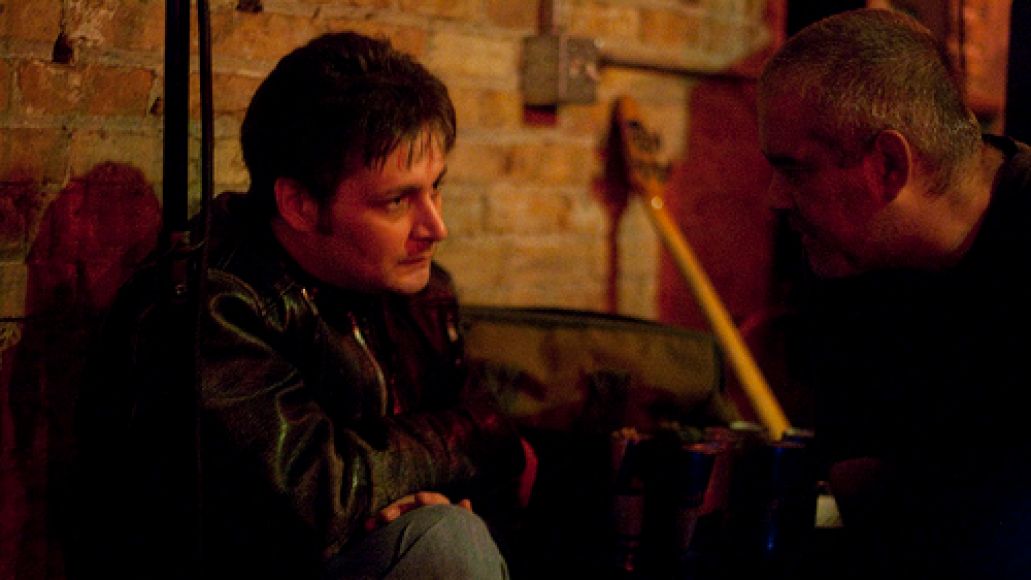 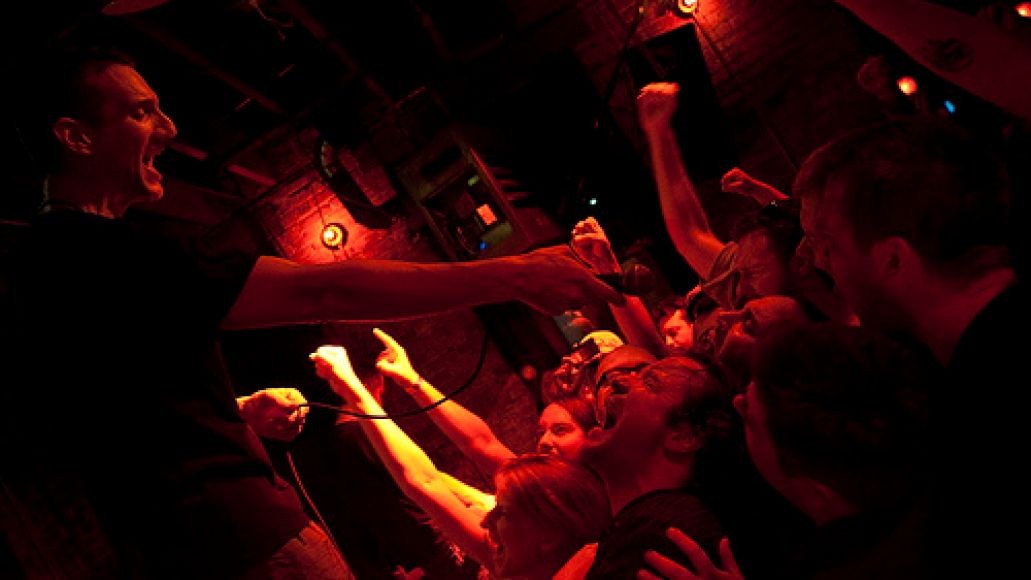