The stage was Subterranean, on the near-west side of Chicago. The weather was cold, but the fans didn’t mind. The occasion? The “Where’s the Band?” tour, starring Anthony Raneri of Bayside, Chris Conley of Saves the Day, Matt Pryor of The Get Up Kids, and Dustin Kensrue of Thrice, all playing solo and acoustic. The four men played their own music and covered other bands, ribbed each other lightly on their musical selections, 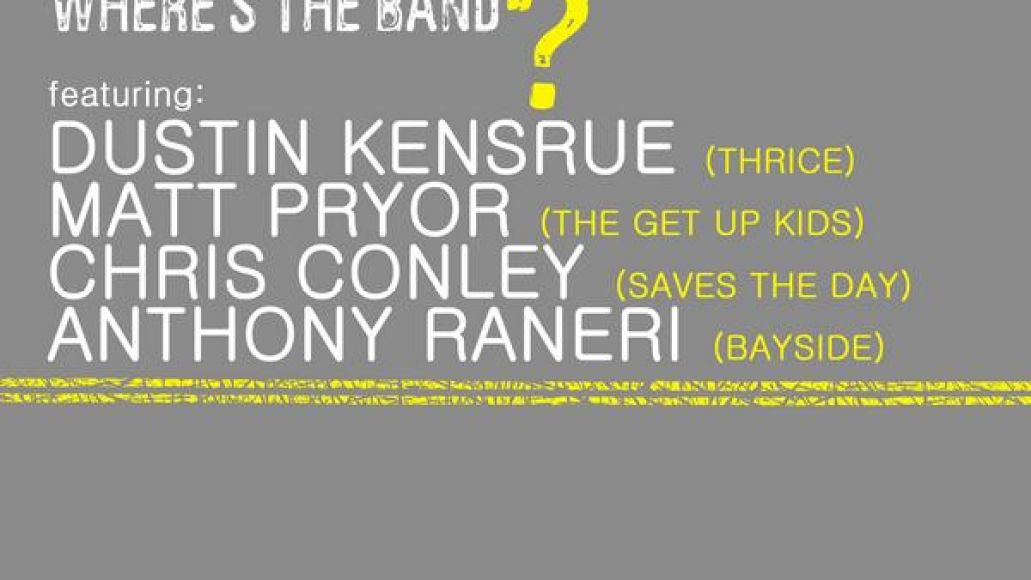 and generally seemed to have a great time. The audience got in on the action too; almost everyone was there to see one singer in particular, but people listened more or less respectfully to all four sets. It was, in all, a legendary night in Chicago music.

Wait, you weren’t there? No trouble; luckily for you, the Internet is waiting to break your fall. Unfortunately, no one seems to have recorded the Chicago concert, but there were many intrepid fans across the country who captured a portion of it. A search of YouTube yields live videos taken from shows in Pontiac, MI; Dekalb, IL; Covington, KY; and Columbus, OH. By listening to a sampling, you can experience the show for yourself (bonuses: free tickets, you get to pick your own set list, and no tall guy standing in front of you). I’ve explored the links and picked what I think best represents each man’s set, but since the Internet is a democratic medium, feel free to explore the related links in the sidebar of each page and decide for yourself. There are about two-dozen more videos where this came from, by the way.

Anthony Raneri of Bayside was the singer I was least excited to hear, because — and please don’t kill me — I had never heard Bayside. I wish I were kidding. But he was on first, and I would do about anything to see Chris Conley, so I stood there patiently. Imagine my surprise when Raneri opened his mouth and his gorgeous, grainy voice poured out over the silent, stunned crowd. He stood there alone in the middle of the stage, clutching his guitar tightly as if from stage fright, and played a set that would set your hair on fire. Please, if you do nothing else tonight, listen to this video of him covering Bad Religion’s ”Sorrow”.

Chris Conley played after Raneri, who was frankly a hard act to follow. Conley rose to the challenge, though (despite some gentle teasing from the other guys on how many Saves the Day songs he had prepared for the tour). He knows how to work an acoustic show, having played Subterranean previously with only his bass player for backup, and this was another excellent showing. Conley’s light, twisting, whiny-but-not tone is simply meant to be heard over nothing but the guitar. He wowed the crowd by playing some b-sides that night, including fan favorite “Take Our Cars Now!”.

Matt Pryor played third. As lately he’s part of The New Amsterdams, his old-school Get Up Kids material was in high demand. Pryor balanced the set by playing old favorites mixed with newer songs, all while deftly silencing one particularly persistent heckler. He played a classic-and classy-set before turning things over to Kensrue. His acoustic rendition of The Get Up Kids’ “Overdue” brought the crowd to fits of joyous head-bobbing. (And he was kind enough to shake my hand and thank me for listening after his set).

After several hours of killer music, the crowd was still pumped and ready for Dustin Kensrue, who was perhaps the major draw that night. His smoky voice had impressive resonance in the darkened hall, and the audience was very receptive. People cheered and some of his tour-mates watched from the back bar as Kensrue played an assortment of songs from Thrice’s several albums, as well as some well-received covers. One of his most popular selections that night was actually a cover: this rendition of Counting Crows’ “Round Here”.

As a surprise to the delighted audience, Conley, Raneri, and Pryor all joined Kensrue on stage for his last song. At the Chicago show, it was a cover of NOFX’s “Linoleum”, which brought wild cheers from the crowd. But this video of the encore from the show in Pontiac, MI is too good not to share: a high-spirited cover of Jawbreaker’s “Boxcar”.