As Renton runs through the streets of Edinburgh, it’s clear he’s up to no good. This isn’t a casual jog young Renton is taking, and it’s certainly not a street race. This character is never running towards anything. He and his mates, Sick Boy, Spud, and Begbie, are only ever running away. They run from authority, from employment, from loved ones. They run away from accepting responsibility not only for their own lives, but the lives around them. Their reason for this (excepting the merely psychotic Begbie) is heroin, their “Lust for Life”. It is the Iggy Pop song of the same name that opens the film Trainspotting (based on the novel by Irvine Welsh), as well as its outstanding soundtracks.

Trainspotting’s companion soundtracks, Trainspotting: Music from the Motion Picture and Trainspotting #2: Music from the Motion Picture, Vol. #2, represent a film that contains both great and essential music to complete the movie going experience. Too often in movies we get treated to songs playing over scenes because they hit number three on the Billboard charts that year. With the Trainspotting soundtracks, each song is carefully chosen by director Danny Boyle to enhance the action on the screen. In Boyle’s film, the music serves the film and not the other way around.

After the punk highs of “Lust for Life”, we are treated to the classical music of Georges Bizet’s “Carmen Suite No. 2” and an instructional montage of how to quit drugs. This contrasts nicely with the opening song, acting as a comedown from “Lust”’s high. Renton tries to stay down completely during this sequence, but the classical music does not befit his nature. Before we know it, Renton has entered “The Worst Toilet in Scotland”. 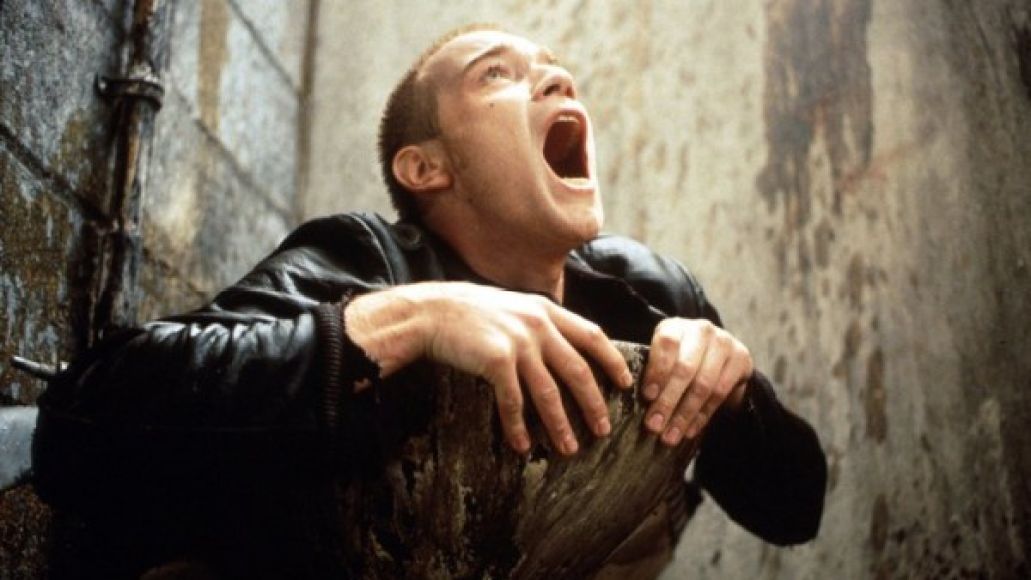 Thanks to Brian Eno’s instrumental, “Deep Blue Day”, we finally have our anthem for when we magically dive into filthy toilets to retrieve our drug suppositories. Once Renton dives in, the color changes to that of a deep blue, and quite beautiful. The tranquil music represents what clicks in Renton’s mind when he has his drug, no matter what disgusting methods it takes to get them. He is ready to go sober, so of course he goes to the number one place where no drugs would ever be found: a nightclub.

Two songs are played during the club sequence. The first is “Temptation” by Heaven 17, setting the mood for the evening. While his friends have partners ready and willing, Renton is looking for a tempting woman to bed down with for the night. As Sleeper’s cover of Blondie’s “Atomic” begins, Renton finds his girl. The song’s repeated lines of “Make me tonight” complete the picture, as Renton and his other friends are shown in various stages of sex.

The next morning, Boyle’s choice of New Order’s “Temptation” is interesting. It’s a completely different song from Heaven 17’s “Temptation”, but plays in the background as Renton finds out Diane is underage. In this scene, there is a different song of the same title for a different view of the same girl. Choosing this new wave song to play while Diane’s middle-aged parents eat breakfast in silence is bizarre. It makes an uncomfortable situation that much stranger, as things stop making sense for Renton.

The music of Iggy Pop returns as “Nightclubbing” appears, though there is not a nightclub to be seen throughout its appearance in the film. During this montage, the boys are back on heroin, their lives a jumbled mess:

With the random lyrics and its repeated drum machine beat, “Nightclubbing” best suits the rinse-and-repeat troubles the characters of the film are constantly getting into. At long last, their mischief catches up to them. 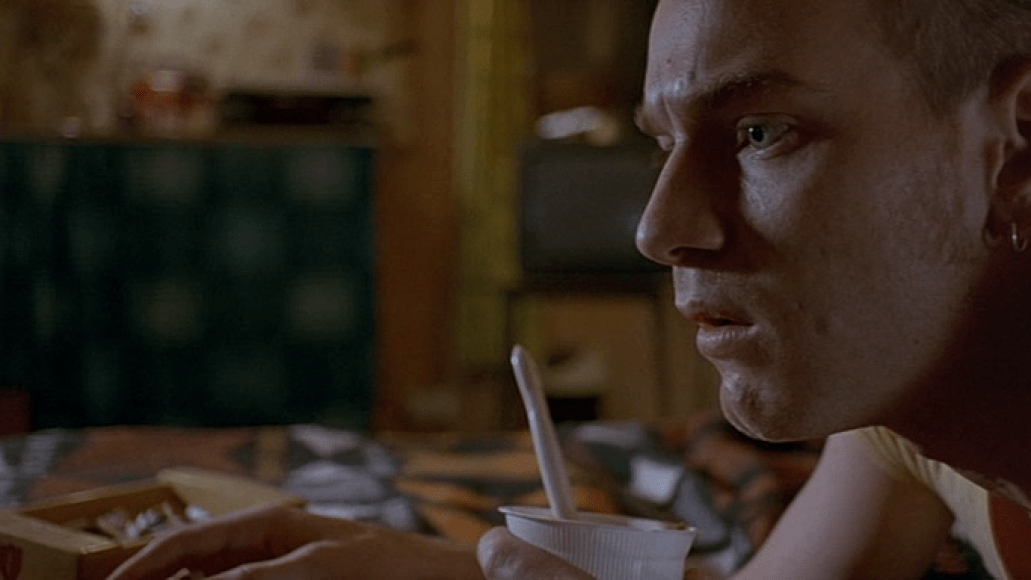 There is no music playing as the group discovers the dead baby of a fellow junkie. After this incident, the boys continue to steal money for drugs, and eventually Renton and Spud are arrested. Blur’s “Sing” appears, its lyrics foreshadowing the eerie withdrawal nightmare to come:

Renton avoids jail, but quickly relapses and overdoses. As a song, Lou Reed’s “Perfect Day” is the exact opposite way to describe the situation, as Renton is unceremoniously dumped into a taxi cab by their drug dealer, to live or die on his own. Its final words transition perfectly into Renton’s cold turkey experience: “You’re going to reap just what you sow.”

Trainspotting’s extended dream sequence is a classic. Renton is confined to his room, unable to move from his bed, as the sins of his past catch up to him. He has nowhere to run as the soundtrack to his nightmare plays on, Underworld’s “Dark and Long (Dark Train)”. The pulsating beats batter Renton down as the dead baby crawls along the wall towards him, his parents fear he has AIDS, Begbie puts him down, and his friend Tommy, once clean, appears to him as a disease-raddled junkie.

All of this seems to convince Renton to straighten his act, leave town, and “Think About the Way”, as the Frisco Vs. Ice MC song suggests. You know you’re dealing with a dark film when its conscience is through the suggestions of a promiscuous, under aged school girl in Diane.

Two songs dominate the funeral proceedings. “Hertzlich Tut Mich Verlangan”, which translates to “My Heart is Filled With Longing”, is played during the service, and Spud sings “Two Little Boys” at a pub afterwards to bring the translation home:

Tommy was the last to succumb to the temptations of heroin, yet the first to fall. Again, despite the tragedy, Renton falls once more to the drug. He says, of course, it’s to try out a drug before a drug deal, and Leftfield’s “A Final Hit” plays to support this claim. After the drug deal, Sleeper’s “Statuesque” appears to represent how the four surviving friends feel after the success of said deal.

In addition to its music being placed at perfect points in a classic film, the soundtracks to Trainspotting also gave an opportunity for younger audiences to become familiar with many different bands. This was an age before iTunes and before the widespread use of the internet. Trainspotting gave us Iggy Pop, New Order, Blur, Lou Reed, Underworld, and other bands not found in heavy rotation on FM radio or MTV at the time.

Some of us were happily content with the soundtracks, while others wanted to hear more from these artists. It is with those results that both Trainspotting and Trainspotting #2 succeed. So choose life, choose a job, choose a career, choose Trainspotting.*

* The soundtracks. Not the act of, you know, spotting trains and what not.