Another year, another CMJ Music Marathon & Film Festival has gone by. It’s hard, really, to overcome. The last couple of days of waiting in lines, of trying to schedule in four different showcases in one night, of buzz bands and special guests, there is a nostalgic twinge that maybe there was something missed. Maybe that band everyone will like next year was in front of me all along and I just slept on it. It could also be that no matter how carefully you planned your weekend, you were ultimately going to fail on at least one aspect. But needless to say, CMJ has come and gone and with it there are plenty of bands to discuss.

Going into CMJ the “it” band of the moment were British rockers The xx. There were plenty of chances to catch them that were publicly announced and some that were secret, but they first hit up the Mercury Lounge. This small space was jammed to capacity in hopes of checking out this new band. However, before the headliner, there were two rather different acts that warmed up the crowd. 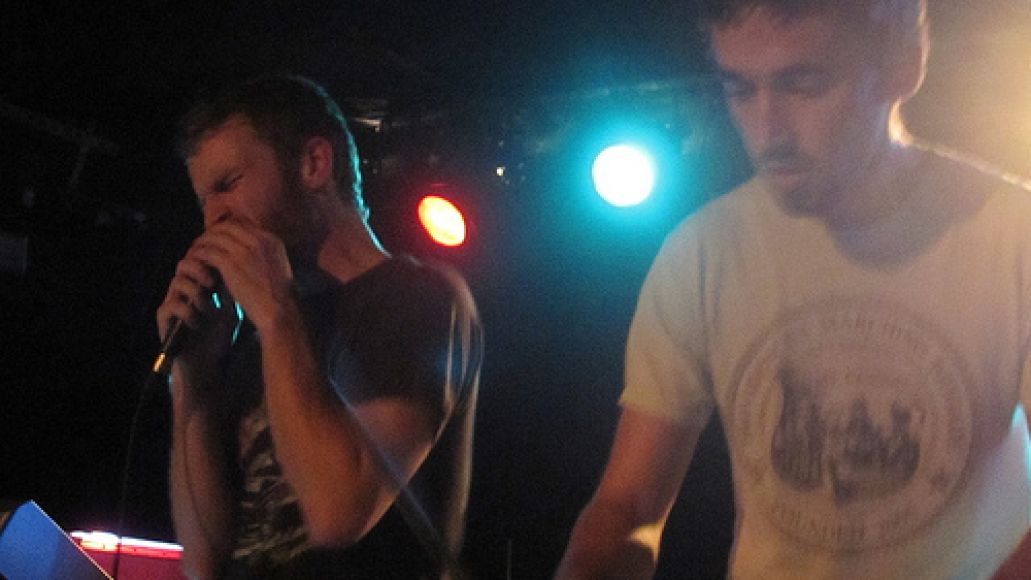 Lia Ices, offered up some bluesy, folksy rock that suited her gorgeous voice. Unassuming, she belted out a variety of tunes, some with nice background solos that added depth to the already strong vocals. With each temp change, the songs shifted moods, which made the night interesting. Furthering the variety was the use of cello and violin in the songs “After is Always Before” and “Daphne”. This was not your normal folk artist sticking to one particular sound and it was a refreshing introduction to the night.

Compared to the previous band, Javelin was from a different planet. Setting up two stacks of busted and abused boomboxes, the crowd knew they were in for a treat, or at least something different. The electronic duo, hailing from Providence, Rhode Island, now call Brooklyn home. The band had an 80’s retro vibe to them but there was just a little more to it than that. Sort of cheesy, sort of funky, the beats were layered and interesting and the vocals were fed through the boomboxes. Acting more as a tool for melody, the lyrics consisted of mostly simple lines that rhymed. The band seemed to be more than the sum of their parts, and  while certainly entertaining, they did have some ups and downs.

British hype bands all tend to sound the same, but luckily things are different with The xx. Instead of a primary vocalist, vocal duties are shared between lead guitarist Romy Madley Croft and bassist Oliver Sim. It’s sort of a tete-a-tete, a musical conversation in which the two reply to one another. It’s interesting as neither have vocals that will blow you away but rather draw you in. Croft’s vocals are hushed while Sim has a baritone that rarely reflects any emotion. The frigid nature of the two voices, coupled with no live drumming, brings the focus on the silence. The intricate compositions of the band give them the power to hold any audience. Jamie Smith and Baria Qureshi add the electronic components which serve to enhance and play around with Croft’s guitar work. Although not flashy, Croft is adept and can weave her way through any soundscape. SIm’s bass is a driving force that is constantly present, giving the songs some backbone. “Crystalized”, “VCR”, “Basic Space”, and the cover of “Teardrops” were just a few highlights from the set. “Night Time” played into “Stars” to end the set.

The band seems to be nervous to be on stage in front of so many people. Standing relatively still and in a line, Sim tried to engage the crowd but sheepishly admitted to not being very good at it. There were plenty of “thank you’s” and smiles to the crowd, though, showing the crowd how appreciated they are. 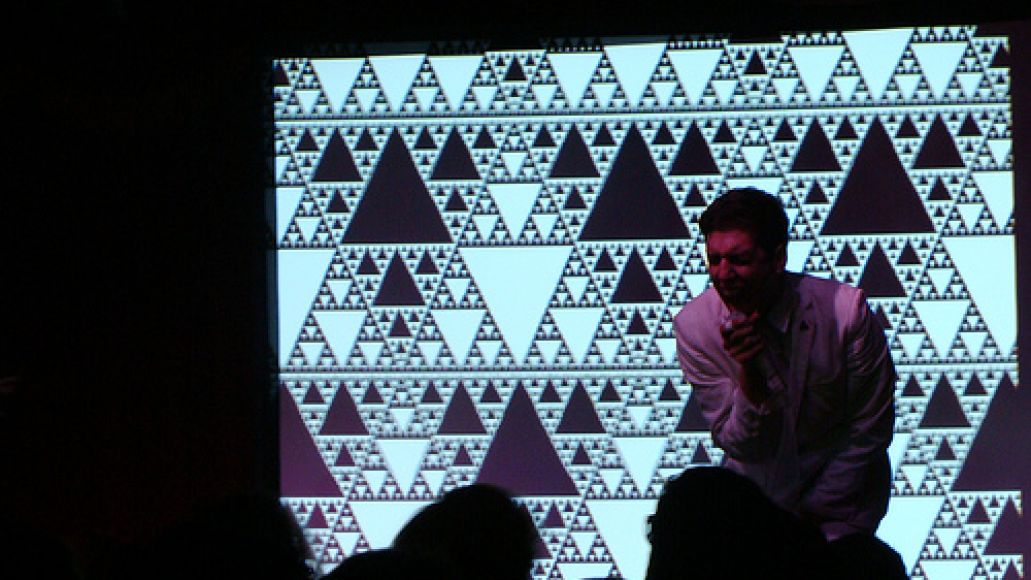 Wednesday over at Brooklyn Bowl’s DFA Records party, YACHT was the act to see as DJ sets by Holy Ghost, and Special Disco Version (James Murphy) assuaged the wait. Brooklyn Bowl is an interesting space. Large and warehouse like with plenty of leather and wood, the stage and concert floor provides a pretty reasonable space to enjoy music. The crashing of pins from the nearby bowling alley did not affect any of the music surprisingly, and I thought that was going to be my biggest peeve of the night. Luckily, that wasn’t the case. Shortly before midnight, and with an appearance by Nick Zinner of the Yeah Yeah Yeahs, YACHT came on and dazzled a very packed Brooklyn Bowl.

The band, a sort of performance piece if you will, hail from Portland, Oregon and offer an interesting take on the concept of being a band and creating music. The band, in short, is whatever it wants to be in the present moment. It will be, has been, and is YACHT. Sort of strange and with the imagery of light and dark, of the afterlife, among other things, this band is clearly self-aware of what a band is supposed to be. Including a “repeat after me” speech that invoked the message of never repeating things that people tell you to repeat, it’s a very unique Meta experience. But if it was all about a post-modern take on being a band, it wouldn’t be that much fun.

The songs are hard driven dance songs with lively song subjects about life, love, of decisions and consequences, and on how things really work. The super heavy “The Afterlife” is like that with its rising church sermon “ahhs” and the lyric “You don’t go to it, it comes to you.” There was plenty of dancing from white suited Jonah Bechtolt and black clad Claire L. Evans, and the visuals had little mantras about positivity, and being self-assured. It’s not so much about “doing” as it is “being.” Clever, fun, and dancey, this band is sure to go places.

One band I had to see, among many others, was Surfer Blood. I’m a sucker for lo-fi rock melodies, after all. Playing a set as part of QuietColor’s CMJ show at Market Hotel with Sleigh Bells, the Florida outfit sounded great opening the night. Yes, it was a rushed performance but that did not deter from their performance. The songs were heavy hitting, with plenty of fuzz and with plenty of guitar lines cutting through it. The band was all over the place for CMJ but still kept the intensity up. “Twin Peaks” ended the night for them. 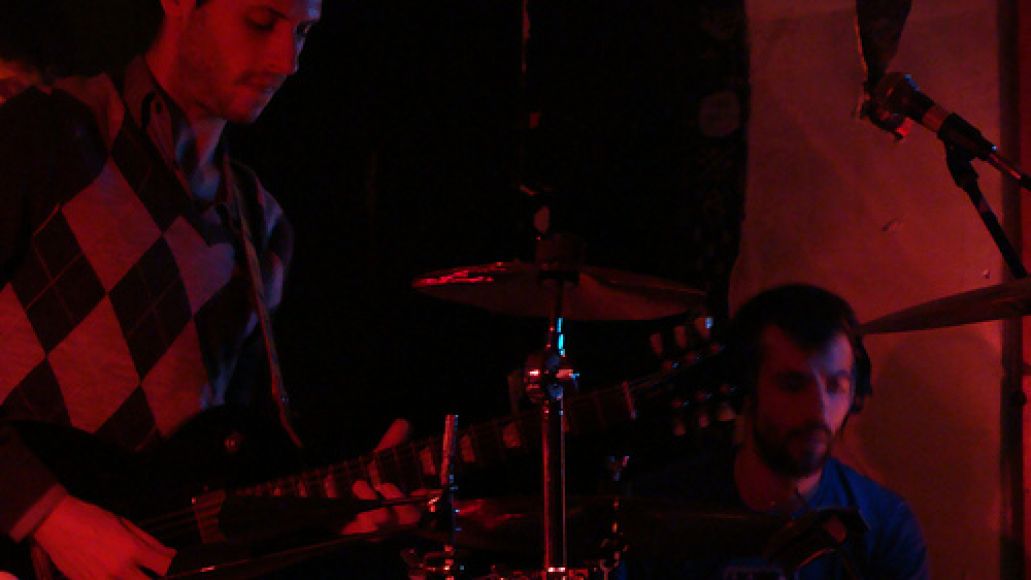 Grandchildren were another band worth seeing. While mostly an instrumental outfit , there was plenty to see on the small stage. Two drummers, one seated and one standing, an acoustic guitar, an electric guitar, a bassist, and a percussionist/electronics, as well as a trombone and the band’s sound was full and busy. Intricate and complex, the band was a blast to watch.

Sleigh Bells was the last act to go on and to those who missed out, well, there was an M.I.A. sighting as she watched the duo perform some hard hitting tunes (check out Pitchfork if you don’t believe me).

Deer Tick‘s headlining CMJ gig may not have contained the cornucopia of surprises that made their August show in Brooklyn’s Prospect Park so memorable (including a wedding proposal that lead singer John McCauley sprung on Nikki Darlin of Those Darlins). But it did still offer a solid helping of their signature bluesy folk, which the crowd — after being properly and rousingly warmed up by the likes of Dolorean and Holy Sons — ate up like so much hominy grits (or whatever roots-folk listeners eat lots of). 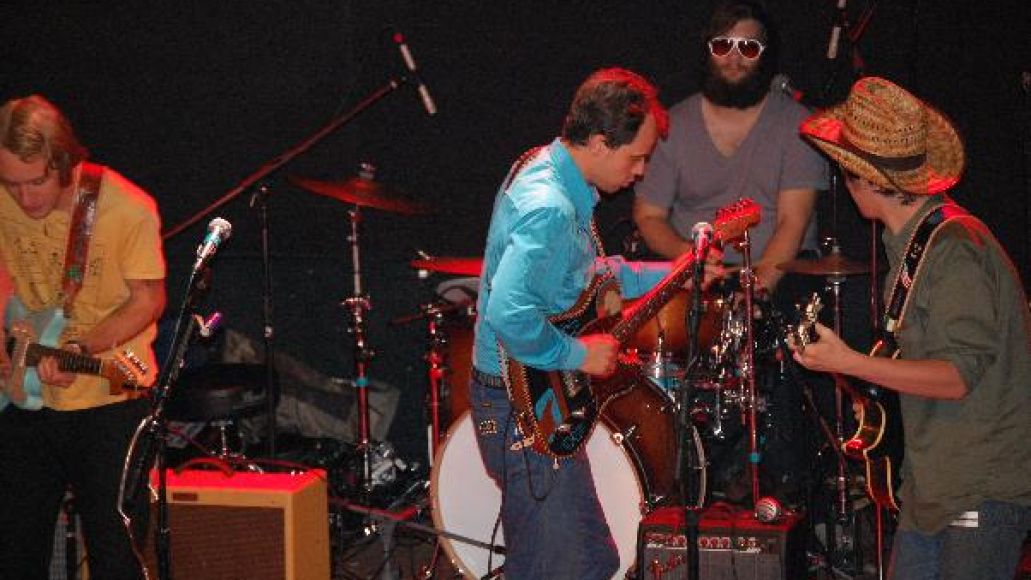 Arguably the most consistent entertainment Deer Tick’s stage shows provide is the visual punchline that is drummer Dennis Ryan, whose bushy beard and uncool sunglasses were clearly the inspiration for Joaquin Phoenix’s nutso stage many months ago. Which is not to say the man doesn’t lay down a solid, infectious beat for his bandmates. In fact, he can get an audience to toe-stomping right quick, as he did that night at Bowery Ballroom.

Another Deer Tick motif is the many friends who join them onstage during a set. Towards that end, I was trying all night to see who that brunette dude was up there with them, taking over lead vocal duties from the always loosey-goosey and entertaining McCauley. Was that Ian O’Neil from Titus Andronicus? Or was that Christopher Denny, the Arkansas-born musician who’s gigged with them in the past? It’s bugged me ever since the show that I couldn’t quite tell. Anybody want to clue me in?? -RM 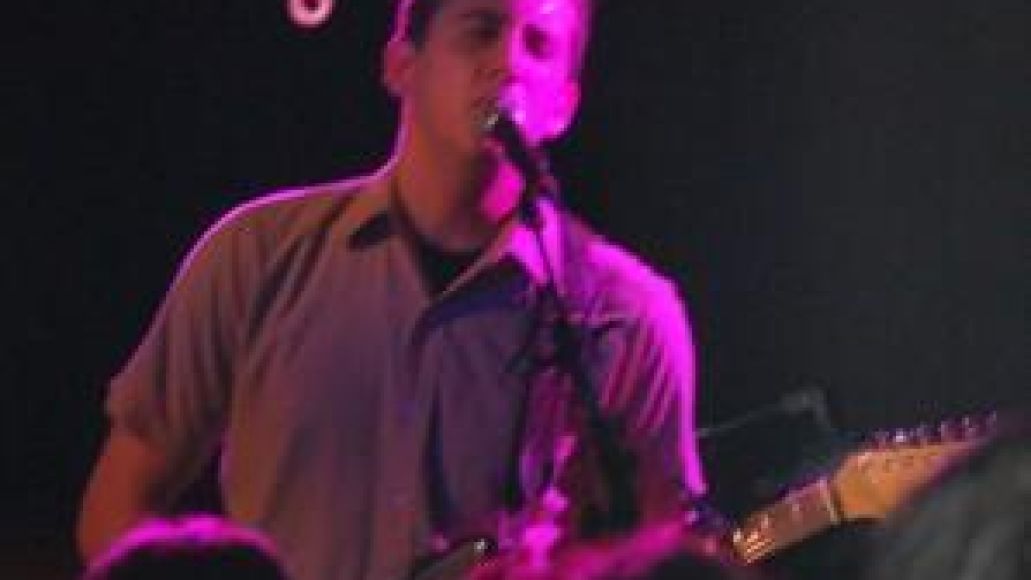 Eight o’clock on a Friday night is way too early to submit one’s ears to the death-rattling emo-thrash that is Cymbals Eat Guitars‘ signature sound. In fact, it’s way too early to use a phrase like “signature sound” to describe CEG, as this is a band with one self-released album that’s been around but a few months or so. However, just as the gods of CMJ skedging forced that start time to be so, a trio as forceful as CEG already is deserves a word like signature, nascent birth be damed.

The young crowd was obviously eager to lap up one of the festival’s most buzzed-about bands, no matter what the hour or the decibel. Arguably CMJ’s closest thing to “hometown heroes” (they’re from Staten Island, went to high school in Jersey), made all the more heroic because they’ve still declined to sign to a label, CEG delivered an intense set of loud-quiet-loud garage noise.

CEG’s single “…And the Hazy Sea” has got to wind up on lots of year-end best-of lists, and frontman Joseph D’Agonstino certainly made a case for it. Frankly, he played, and sold, the shit out of that song. The set continued full-speed-ahead, plowing through “Plainclothes” and “Tunguska” like a rock-and-roll freight train. It’s rare to feel as exhausted as an audience member as the band members are by the end of a set, but the guys in Cymbals Eat Guitars sure managed just that. — RM