Rock ‘n’ roll and political protests have gone hand in hand since the dawn of the genre. From the Beatles’ “Revolution” to Muse’s The Resistance, artists have always found ways to point out society’s problems and give a voice to the people being affected. Many of these songs are either a call to somewhat violent change (Rage Against The Machine) or a movement of peace (“Imagine” by John Lennon). However, U2 was one of the first groups to combine the two beliefs into an idea of aggressive pacifism. This idea culminated in the creation of one of their most well-known songs, “Sunday Bloody Sunday.”

“Sunday Bloody Sunday” first came together in 1982 while U2 were just starting to work on their third album. Bono was on his honeymoon with his wife Ali Hewson, leaving The Edge to begin working on the music in Ireland. After one particularly miserable day in which Edge got into a fight with his girlfriend and doubted his songwriting abilities, he channeled all his anger into a piece of music that would become the song’s main riff. Though both sets of lyrics deal with the troubles in Ireland, Edge’s original lyrics were much more blunt and risky. Starting with the line, “Don’t tell me about the rights of the IRA, UDA,” the track was strongly anti-terrorism. The lyrics were later changed to ensure the safety of the band and their families, as well as to promote a message of tolerance on both sides. 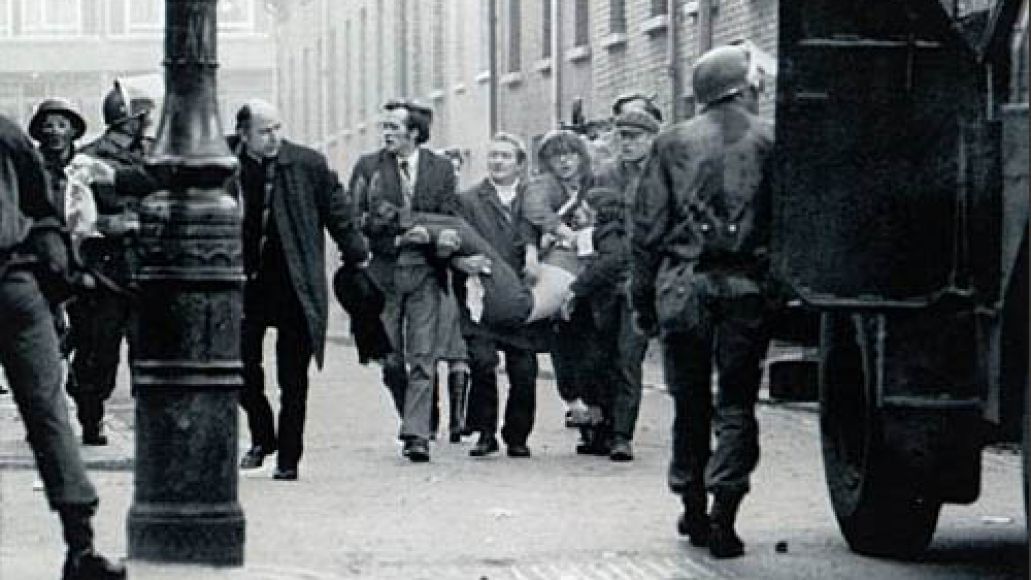 The final version of “Sunday Bloody Sunday” was the opening track to U2’s third album, War. Kicking off with Larry Mullen, Jr.’s militaristic drumbeat, the song moved away from the echo-laden guitar the band had used on their first two albums.  Instead, the guitar notes were icy and had a brittle feel to them. The accompaniment of Irish violinist Steve Wickman helped to connect the track to traditional Irish music. The Bloody Sunday mentioned in the song called back to the 1972 incident in Derry where British soldiers fired on a crowd of protesters, killing 14 of them. Bono directed his anger in the lyrics to the loss of life in general, rather than pointing fingers. With lyrics like, “And the battle’s just begun/There’s many lost, but tell me who has won/Trenches dug within our hearts/And mothers, children, brothers, sisters torn apart,” Bono conveyed the sadness and anger over such a loss of life. 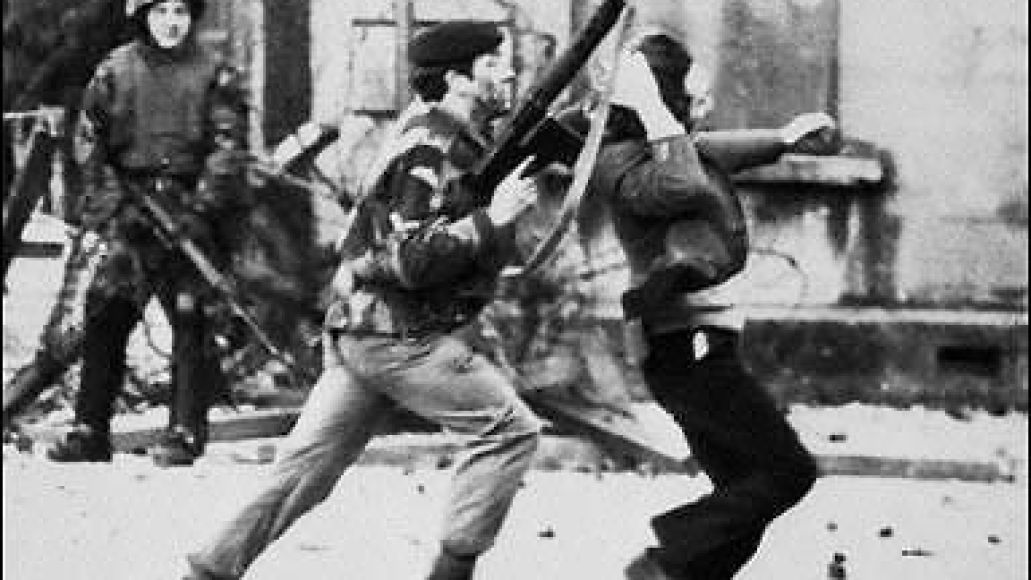 Like many of U2’s songs, “Sunday Bloody Sunday” has evolved and changed throughout the years it’s been played live. When U2 performed the song on the War Tour, there was some trepidation on how the crowd would react, especially their Irish fans. There were some who saw the song as a glorification of the Troubles and a call for revolution. In order to squash these ideas, Bono introduced the song by saying, “This song is not a rebel song. This song is Sunday Bloody Sunday.” This statement, combined with the white flags that waved behind the band on stage, helped bring forth the song’s non-partisan intention for a peaceful solution.

U2 continued to perform “Sunday Bloody Sunday” as a staple of their live set. As their popularity increased, the band chose it as the opening number of their two-song set for Live Aid. With U2 flags sticking out of the crowd everywhere, the band played a passionate performance during which Bono had the entire Wembley Stadium singing the words “No more!” along with him.

The song reached its live peak during the Joshua Tree Tour. On November 8, 1987, a bomb placed by the Provisional Irish Republican Army exploded during a Remembrance Sunday commemoration in Enniskillen for those killed in all conflicts involving the British Army. The bombing killed 11 people and became the latest stage of the Irish conflict. Later that same day, U2 performed one of the angriest and most passionate versions of “Sunday Bloody Sunday” in their career. It started off with just Edge and Bono before the rest of the band kicked in halfway through. After Edge’s solo, Bono unleashed one of his most scathing rants against the violence occurring in his home country.

After the tour ended, Bono mentioned at one point that the band may never play the song again, since it became real on that day that the performance would never be bested. For the next few years, U2 kept to their word. “Sunday Bloody Sunday” wasn’t played on any of the dates for the 1989 Lovetown Tour. It made a few appearances during the band’s 1992-1993 ZooTV extravaganza, but it was mostly left out of the set.

The song only really returned midway through the band’s 1997-98 Popmart tour. The tour was the most extensive U2 had done up to that point, with dates in South America, Japan, and South Africa. One of the most special dates of the tour occurred when the band visited the war-torn city of Sarajevo. During ZooTV, Sarajevo was under siege by the Serbian Army looking to add the city to a new Serbian state. The conflict lasted for about four years, leading to thousand of deaths and injuries. U2 was closely involved with trying to get help to the citizens of the city and wanted to play there during the conflict. It was deemed too dangerous, though, so the band waited until their next tour to play Sarajevo. It was during this show that “Sunday Bloody Sunday” made its return, albeit in a very different structure. The Edge performed a slow solo version of the song that emphasized the sadness over the violence rather than the anger. It was this version of the song that Edge continued to play for all the remaining dates of the tour, dedicating it to Sarajevo every time.

During U2’s successful Elevation Tour, the “…Sunday” returned in its full band version. This time around, the song was centered on Ireland again. While the Troubles in Ireland had been resolved by 2001, U2 played the song in tribute to those who died in the Omagh bombing of 1998. The bombing killed 29 people in Northern Ireland and was carried out by the Real Irish Republican Army, a splinter group of the IRA. The attack was seen as a response to the nearly completed peace process occurring in the nation.  During performances, Bono would ask for the crowd to “Turn this song into a prayer.” During their emotional concerts at Slane Castle, Bono recited off the names of all the victims of the bombing in tribute to the lives lost. After 9/11, the song was played in tribute to those who died in the terrorist attacks. Instead of talking during the middle break, Bono instead hugged an American flag.

“Sunday Bloody Sunday” found itself placed in the middle of a political trio of songs on the Vertigo Tour.  All three songs, but mostly “Sunday Bloody Sunday”, centered on the theme of coexisting. The song was played immediately after “Love and Peace or Else” and segued into “Bullet the Blue Sky.” As it started, the word “coexist” was displayed on the video curtain with the Islamic crescent, the Star of David, and a Christian cross making up letters in the word. After Edge’s solo, Bono would usually drive the point home by saying, “Jesus, Jew, Mohammed, it’s true. All sons of Abraham.” This version of the song focused on the growing religious conflict around the world and was a call for all faiths to realize that they’re much more similar than they think. 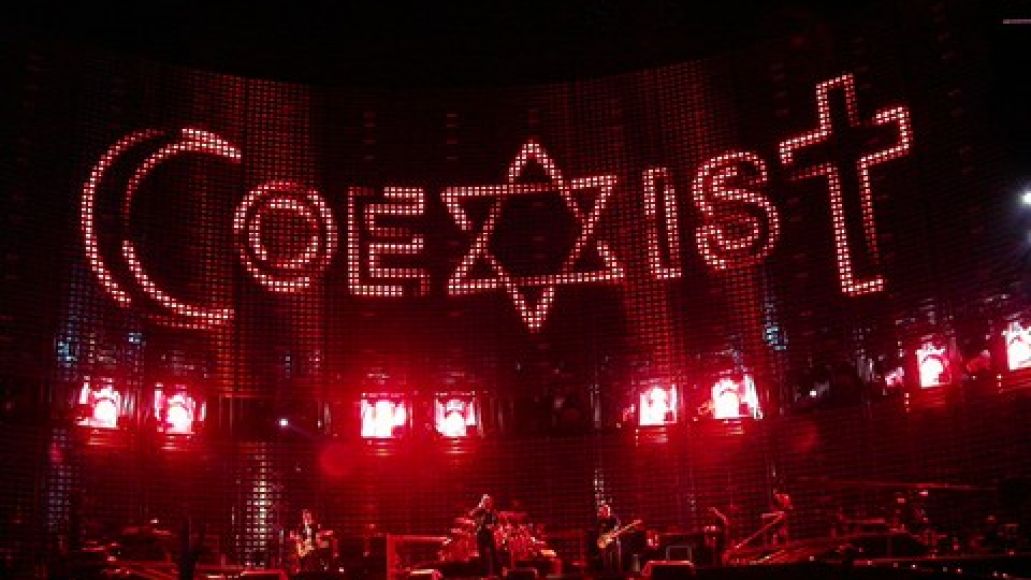 Recently, this past year, “Sunday Bloody Sunday” became re-contextualized yet again as a tribute to the 2009 Iranian election protests. The song was also a focal part of the transition between the two parts of the main set. Bono has mentioned in interview that the first half is a personal journey, up until a techno version of “I’ll Go Crazy If I Don’t Go Crazy Tonight.” The backing beats and looped vocals fade out as “Sunday Bloody Sunday” kicks off the political half of the set. As the band played through the song, Iranian writing and footage from the protest appeared on the screen, tinted in a shade of green.

The live history of “Sunday Bloody Sunday” has shown how versatile it is as a song. A track originally written as a call for peace in Ireland has spread throughout the years to a call to the end of all conflicts. Its message is backed by the power of the lyrics and music that it contains. It’s a number that fans love to hear played live. However, every time they do, there’s one line that comes through over and over. “How long must we sing this song?”