The transition from novel to cinema is quite a tricky one. While some argue that “the book is forever better than the movie,” certain exceptions have been made. The most famous cases that can be argued in defense of their cinematic counterparts include Steven Spielberg’s 1975 thriller Jaws (written by Peter Benchley) and Francis Ford Coppola’s crime 1973-74 masterpieces The Godfather trilogy (based on the novel by Mario Puzo). With that being said however, the brilliant Irish author Roddy Doyle’s Barrytown trilogy is another dazzling series of stories that at first seem incredibly sophisticated to pin down into films. For starters, all three novels are virtually dialogue only. Humorous and colorful, Doyle’s writing and specific prose capture the ethics and environments of working class Irish life. Fortunately, in 1991 famed British director Alan Parker (The Wall, Mississippi Burning) not only took Doyle’s first novel, 1987’s The Commitments, and turned it into an instant classic, he opened the doors for future rock-oriented movies to come.

“Ladies and gentlemen, put your working class hands together for the hardest working band in the land…The Commitments!” -Jimmy Rabbitte

Opening this cinematic masterpiece, Roy Head & The Traits’ “Treat Her Right” plays over the credits as well as the surrounding shots of inner city Dublin. The film centers around the main character Jimmy Rabbitte, a music lover with no end in sight. Brilliantly played by Irish actor/musician Robert Arkins, Rabbitte’s sheer confidence and shrewd businesslike demeanor play heavily into how the film unfolds. His best friends include guitarist Outspan Foster (played by Glen Hansard, guitarist of The Frames and The Swell Season) as well as bassist Derek “Meatman” Scully (played by guitarist Kenneth McCluskey). Jimmy has returned from a trip across the country and convinces his two friends to leave the band they’re currently in because their singer “doesn’t have any soul.”

After a performance at a friend’s wedding commences, Rabbite and the others discuss different types of music, as well as band names, that aspire to where they come from and what reflects on the working man; soul. Soul music, as described by Rabbitte, is the working man’s music, the gears and grunt of the overall lifestyle…”ridin’, screwin’, fuckin’.” He also explains that the best 60’s bands always were “The somethings…” and that they should follow suit. Soul begins to engross the characters and proves to be the foreshadowing of what the rest of the film aims to do; lift the spirits of the people and give something universal to the North Side Dubliners. 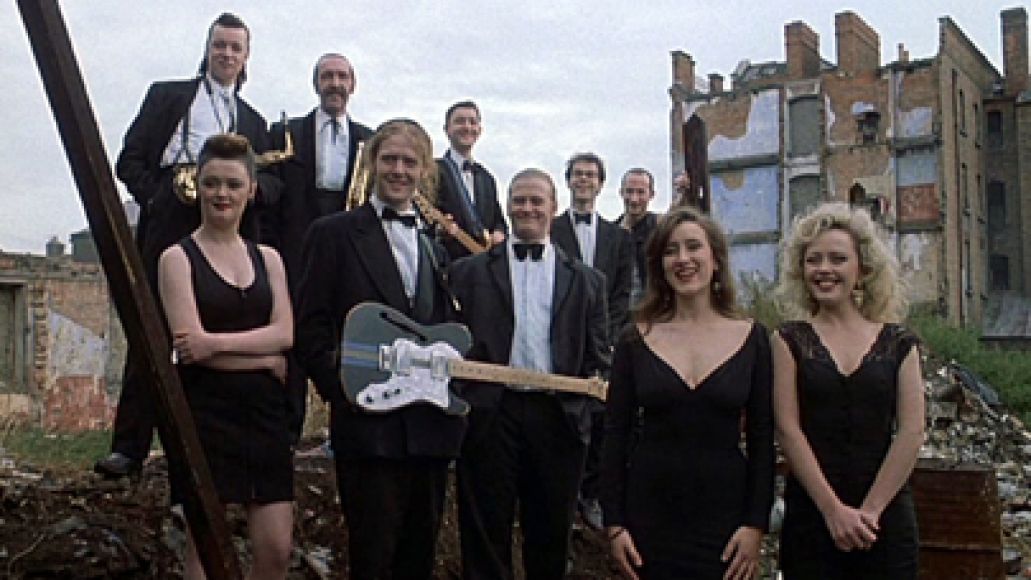 Backtracking a bit during “And, And, And’s” performance at a friend’s wedding, the three characters spot a wildly drunk patron grab the microphone and wail as loud as possible into it. Rabbitte immediately takes a liking to this and eventually meets up with him during his day job at a car wash. He turns out to become the band’s lead singer, Declan “Deco” Cuffe (played brilliantly by 16-year-old Andrew Strong). At first he seems to balk at the idea of performing live. Rabbitte assures him though that his voice is genuine and that he’s “got a great set of lungs.” Initially hesitant at first, he then accepts Rabbitte’s offer to join the yet-unnamed band.

Over the course of the film’s next crucial scenes, we witness Rabbitte’s hilarious auditions take place as he looks for the rest of the members for his band. His father chimes in from time to time and asks him to sing for the band (played by legendary Irish actor Colm Meaney) as well as share his complete love for Elvis Presley. Bagpipe players, acoustic troubadours who sing songs about the KKK and Slash-lookalike heavy metal guitarists dominate the Rabbitte family’s living room. All the while Jimmy feels the daunting pressures and hard work associated with getting a band going, while hilariously asking that “rednecks and South Siders need not apply.”

Eventually, saxophonist Dean Fay (played by Irish sax player Félim Gormley), drummer Billy Mooney (played by Dick Massey) and pianist Steven Clifford (played by Michael Aherne) join the ranks of the fledgling group. After a night of all out drinking (complete with heavy handed criticisms of art-school music), the men welcome the group’s ladies to the forefront, backup singers Imelda Quirke (played by Angeline Ball), Natalie Murphy (played by Hothouse Flowers singer/member Maria Doyle Kennedy) and Bernie McGloughlin (played by Bronagh Gallagher). It is here while on the train ride home, Rabbitte describes in full detail the possibilities of becoming a soul band. With the entire band singing along to The Marvelettes’ “Destination: Anywhere”, it looks for the first time the entire band is united in their personal cause to bring soul to the sufferers of Dublin’s hard working lifestyle.

While preparing the band for their foray into soul, Deco, Dean and the others witness a performance on television of James Brown back in the 60’s. Seemingly confused at first, Dean asks Rabbitte, “Do you think we’re a little white for this sort of thing?” Rabbitte responds with the most important message of the movie:

Eventually after a humorous meeting with the group’s charismatic trumpet player and veteran musician, Joey “The Lips” Fagan (played by Irish stage actor Johnny Murphy), Rabbitte and the rest of the band come up with the band name, The Commitments. Soon afterward, the band finds a practice space and begins belting out the soul number, Wilson Pickett’s “Mustang Sally.” The rehearsals become rough and ragged, but Rabbitte’s confidence and Fagan’s leadership ultimately consume the band and they become a tightly-knit band.

During the band’s first gig at an anti-heroin campaign, the band show signs of nervousness and stage fright. However, they are able to win the crowd over with scorching versions of Otis Redding’s “Mr. Pitiful” and Mary Wells’ “Bye Bye Baby,” (Maria Doyle Kennedy absolutely kills it here.) It is also here however that Deco starts to show signs of severe egotism, going as far as to ask, “How d’yee like me band?” With that said, bassist Scully then is electrocuted onstage and ends the band’s first set prematurely. 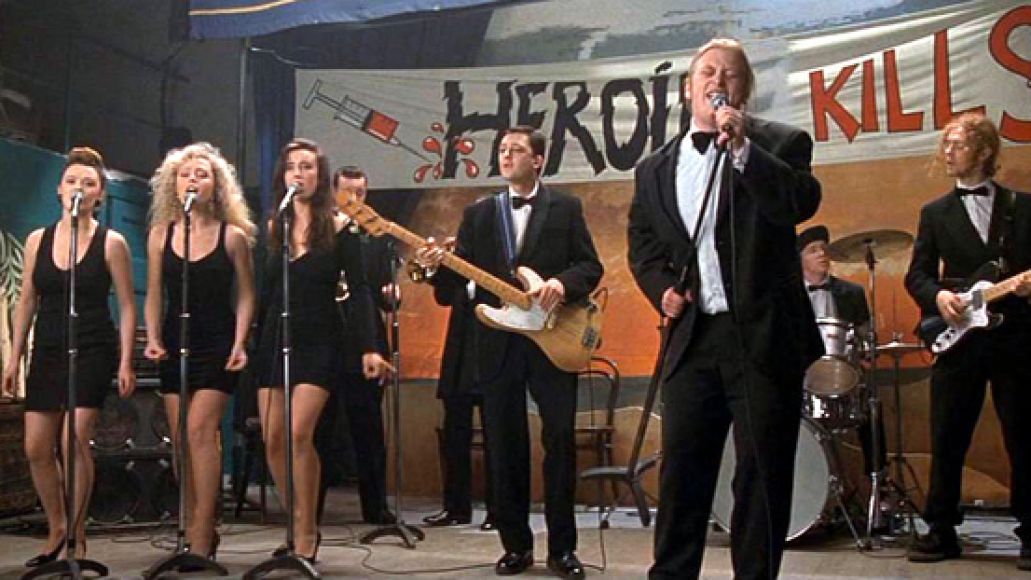 For the next few scenes, The Commitments are shown rehearsing and showing the band’s progress from scrappy Irish kids to becoming an aspiring soul band. However, the cracks begin to show themselves within the band and become more and more prominent as the film continues. At the band’s next gig, Deco and drummer Billy Mooney get into an onstage argument which foreshadows much more damage to follow. Afterward, the band launches into an weeping version of James Carr’s version of “The Dark End Of The Street,” complete with epic Deco face changing grunts and moans. The crowds begin to pay more and more attention to the new “saviors of soul” and begin attracting larger crowds hungry for the music that defines them.

While the band’s popularity begins to rise, drummer Billy Mooney abruptly quits the band due to his intense dislike for Deco. Rabbitte is furious with Mooney’s decision but nonetheless lets him go. Facing a daunting task to venture forward, Rabbitte decides to break the band’s tough-as-nails roadie, Mickah “Don’t Fuck With Me” Wallace (played by Dave Finnegan) as their new drummer and the results are downright hilarious. After a few sessions with Wallace on the kit, The Commitments tear it up again at their next gig with dazzling performances of Otis Redding’s “Hard To Handle” (available on the Vol. 2 soundtrack) and Aretha Franklin’s “Chain Of Fools.” During the band’s gig, Rabbitte is roused up by some loan sharks who demand money from him in return for borrowing PA equipment for the band. While the loan sharks threaten to steal all the band’s fortunes, Wallace jumps offstage from his kit and pummels all three of the sharks while giving the money back to Rabbitte. Easily the best scene in the movie and proves to be the climax for this hard-working band.

Sadly all good things do come to an end and by the time Wallace’s heroics come into the fold, the band resemble nothing more than a pile of splinters. Dean explores jazz music (much to Rabbitte’s dismay), all three backup singers begin fighting over sleeping with Joey “The Lips” and Deco is offered an opportunity to sing with another band. With word that Wilson Pickett will join the band onstage at their last gig, The Commitments band together for one last outing with awesome performances of Otis Redding’s “Try A Little Tenderness,” Aretha Franklin’s “I Never Loved A Man (The Way I Love You)” and their closing number of Wilson Pickett’s “In The Midnight Hour.” While the group put on their finest hour of musicianship, as well as receive an offer to record through Eejit Records, the band break up amidst a sea of arguments, brawls and jealous egotism…all with Rabbitte watching in disgust saying “fuck the lotties, fuck ’em.”

The film ends with a personal dialogue between Jimmy Rabbitte and Joey “The Lips” discussing the failing of the band as well as Rabbitte’s accusations of Fagen being a liar:

“Look, I know you’re hurtin’ now, but in time you’ll realize what you’ve achieved.” -Fagen
“I’ve achieved nothing!” -Rabbitte
“You’re missin’ the point. The success of the band was irrelevant — you raised their expectations of life, you lifted their horizons. Sure we could have been famous and made albums and stuff, but that would have been predictable. This way it’s poetry.” -Fagen 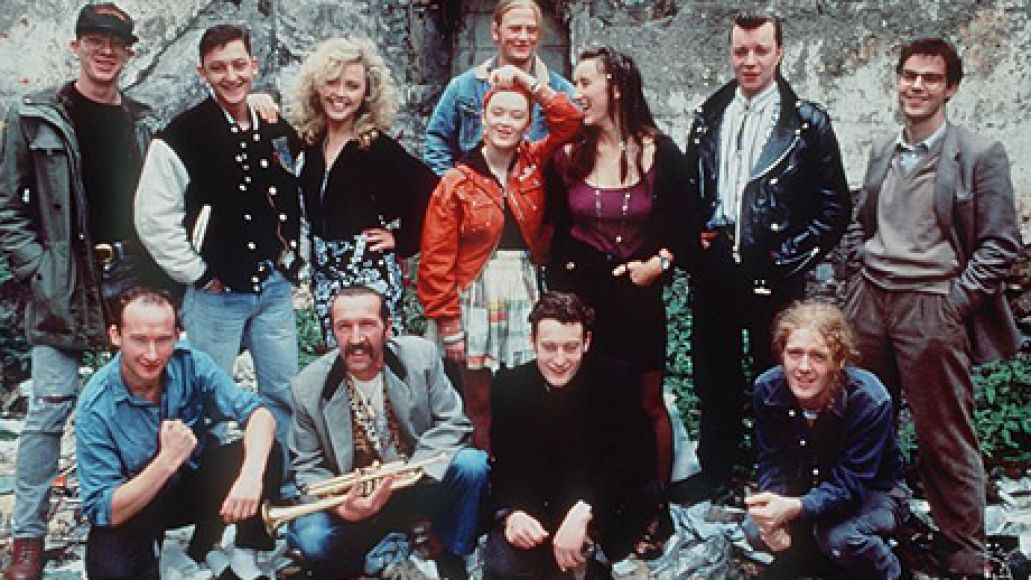 In the final scene, a montage shows the aftermath of the band’s members venturing into other musical territories as well as with a mock interview of Rabbitte with Rolling Stone over the bookend of Roy Head & The Traits’ “Treat Her Right” during the closing of the credits. With the journey of arguably one of the finest musical films ever made, Alan Parker’s The Commitments is a musical joyride through the beauty and the breakdown of Dublin life. Soul is used as an escape; a getaway for those afflicted with the crippling of the endless working class days. What Rabbitte fails to see at the time of the band’s demise comes to fruition throughout the film. With the film’s soundtrack in check, not just the North Side Dubliners earn a piece of soul, but the gift is shared by everyone who desires a getaway and a simpler, honest approach to the world. If only Rabbitte could see his work now, The Commitments over time seem more and more relevant with each passing year. Simply put, Roddy Doyle is a genius and The Commitments never gets old.