Acting as the predecessor to movies such as Cruel Intentions, which is based on Laclos’ novel Les Liasions dangereuses, and 10 Thing I Hate About You, the adaptation of William Shakespeare’s The Taming of the Shrew, the 1995 comedy, Clueless, which is based on Jane Austen’s novel Emma, champions the spirit of notable literature being adapted into a high school film that just so happens to offer a stunning and dynamic soundtrack, too.

Not only did Clueless take Alicia Silverstone from video vixen to silver screen starlet, it paired 80’s pop with 90’s ska punk and alternative rock. The musical trichotomy paired with a pinch of rap enables the soundtrack to be removed from the “whatever,” “as if” dialogue and remain completely, if not more, relevant than the film.

Opening with one of the numerous, but more popular, covers of Kim Wilde’s 1981 debut single “Kids in America” by The Muffs, Clueless is off to a good start. Assimilating to rock a bit more than the original, The Muffs’ cover sets the stage for a world of privileged California teens. In the style of fantasy film that is so often pushed on impressionable high school age girls longing to be popular, Cher Horowitz (Silverstone) and her friends are truly the “kids of America.” They party, they flirt, and they look good while doing it. 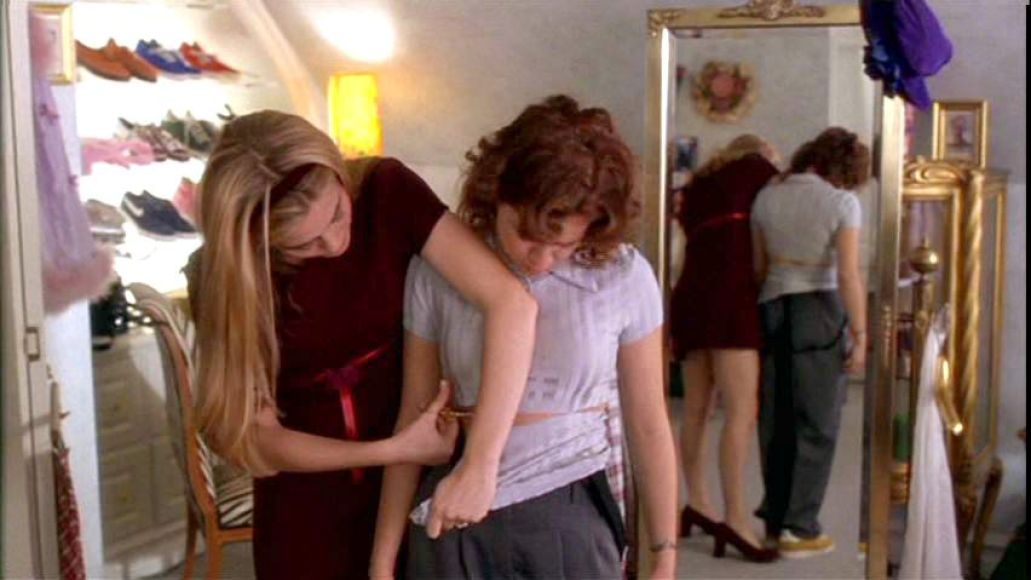 Further fulfilling the fantasy of style conscious American youth is the makeover movie montage. The late Brittany Murphy commands the role of ugly duckling Tai Fraiser making her first major mark in the film industry. The music supplied for the moment is fitting with lyrics (“I don’t care what my teachers say/I’m gonna be a supermodel/And everyone will wanna dress like me, wait and see”) from Jill Sobule’s “Supermodel”. Life imitated art, as Tai was transformed, with Murphy later undergoing her own transformation from a pudgy, brunette into a slender, blonde. Though looking back now, the dry, witty lyrics — more specifically, “I didn’t eat yesterday/I’m not gonna eat today/I’m not gonna eat tomorrow/Cuz I’m gonna be a supermodel” — come off as more depressing than tongue-in-cheek.

Keeping in tune with the youthful vibe, “Alright” by Supergrass, an alternative rock band from Oxford, chimes in. The song has an upbeat and merry sound with lyrics such as, “we are young, we run green/Keep our teeth nice and clean/See our friends, see the sights, feel alright.” The song is classic British pop, with an enthusiastic feeling that mirrors the protagonists’ jovial lifestyle.

Other songs are offered in short snippets, which makes it even more important for one to listen to the actual soundtrack. For example, Coolio’s “Rollin’ With My Homies” and the Beastie Boy’s “Mullet Head” act as mere fillers for the teens’ activities, such as partying, driving about (recklessly), and skateboarding. It’s a shame the songs aren’t used further, as the intensity of “Mullet Head” recalls some of the Boys’ best efforts, while “Rollin’ With My Homies” is typical Coolio. Although, neither of the songs mesh well with the cast of characters, they are enjoyable on their own.

On the opposite end of the spectrum, an acoustic version of Radiohead’s “Fake Plastic Trees” and Counting Crow’s “The Ghost In You” offer a tranquil atmosphere. Again, the songs aren’t completely relating to the snobbery of the Beverly Hills set. However, they speak to Paul Rudd’s portrayal of Josh Lucas, the token college student. As Josh acts as juxtaposition to Cher’s teenybopper world, the two songs act the same, with their emphasis on guitar and soft vocals, whereas the majority of the soundtrack is more upbeat and in your face.

Radiohead secures a second spot on the soundtrack with “My Iron Lung”. The song is strikingly similar to “Creep”, with Thom Yorke’s vocals taking a familiar pattern with a slightly higher octave. Oddly enough, “My Iron Lung” was recorded as Radiohead’s reaction to “Creep”. With lyrics such as, “This is our new song/Just like the last one/A total waste of time/My Iron Lung,” cementing the similarities.

The Mighty Mighty Bosstones make a cameo in the film, while playing a number of songs that span three albums: “Someday I Suppose”, “The Impression That I Get”, and “Where’d You Go?”. However, only one tune makes the cut. “Where’d You Go?” showcases the group’s appeal with simple lyrics and low-key ska. It’s also just fun to bob and dance to, but maybe that’s just the inner Cher acting out.

But something surprising happens, the film dusts off an “oldie” and closes with General Public’s 1984 “Tenderness”, which unfortunately doesn’t appear on the actual soundtrack. Shockingly enough though, the song fits right in with the film, leaving the audience to feel positive in a camp-like ‘80s way, which is the same feeling the song delivers on its own.