At first glance, a band named Bully in the Hallway from the Chicago area sounds menacing, cutthroat, maybe even mob related. Well don’t judge an album by its cover. The only thing that will throw you on the ground is their jolting sound, backed by five regular guys in pursuit of bringing rock back to the Windy City.

Their story’s fairly simple. Billy Kenefick and John Matthew Simon used to go around bars pretending to be in a band, and one day they decided to act on it. Along with some old friends, Bully in the Hallway formed in late 2006, and shortly after, the band hastily put together a demo before going live. Once touring began, Bully quickly gained a name for themselves through their bratty antics on stage, invigorating a city unprepared for the nostalgia of an older sound. 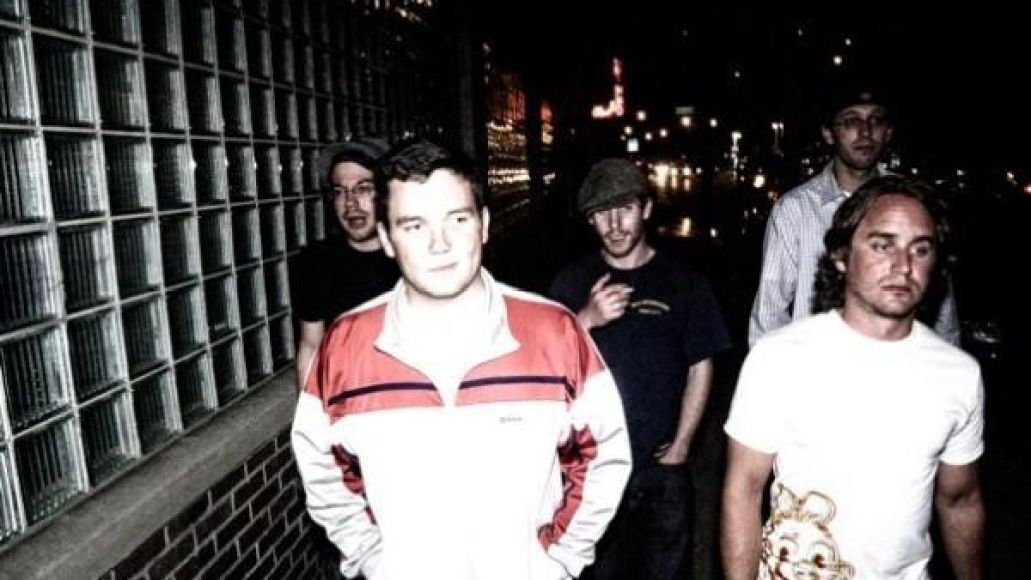 The truly refreshing aspect of Bully is their tendency to stray from the “yawn” music that dominates the indie-charts of today. (Not that there’s anything wrong with the likes of Grizzly Bear or Bon Iver; I just don’t want my entire iTunes library ending up in a sleep playlist.) This Chicago quintet is most definitely punk rock and embraces comparisons to Fugazi and other staples of the genre. Their first LP, Apples and Sunshine, aims to break ground as a fusion of punk to jazz to funk, and serves as a side dish to the outstanding live shows put on by the band for the past two years.

Their dedication to the city that brought them success is obvious in Bully’s video, “Steal the Wind it’s Free” (see below), filmed in downtown Chicago. Amongst skyscrapers and statues, Simon’s voice shouts overhead as history of an illustrious past is thrown in between — at the end of the day, they love their roots.

CoS had the opportunity to ask John Simon and Billy Kenefick a few questions about conquering Chicago, shoes, and future plans for the still-developing band:

Just starting out, what was Bully in the Hallway’s message and how has it changed throughout the past years?

Simon: We set out to capture the essence of the greats that had traversed this tricky summit known as the music industry…  And we haven’t stopped since: like a whirlwind constantly writing and developing our sound, as well as honing the live show.

Between the music video and song lyrics, your love for Chicago is pretty obvious. Does Bully have a favorite place to play?

Kenefick: I’d say our favorite venue is probably the Empty Bottle, but Ronny’s is a close second…

Simon: My personal favorite, in terms of nostalgia, is the Metro (Metro Book Us!). However I would agree with Bill that the Empty Bottle is the epitomy of Chicago Indie Rock, and thus our favorite to play.

Tell us a little about the new album.

Kenefick: Apples and Sunshine was recorded at Phantom Manor with Mike Lust (of Tight Phantomz), chosen after hearing some of his work with other local bands (The Narrator, Sybris, Spiller Whale).

Simon: With our first LP Bully’s hoping to catch the ear, the eye, and the smarts of the musical world.

What’s it like playing with two guitars and three vocalists?

Simon: At first it was especially difficult since myself and bill had no formal training in singing… Kennedy helped us through that first year of broken harmonies and go-for-broke belting… As well our pal Violetness whipped me into shape with formal excercises… But as time has gone on we have adapted, harnessed, and learned how to properly execute as a tri-vocal arrangement. Plus it gives us endless possibilities, in terms of writing.

Kenefick: Having three vocalists and two guitars can be a bit hard to organize at first, but when you get used to it I feel it can bring a huge advantage and diversification to what you can write and play live as a group

Simon: Nike for bringing Punk and HipHop culture together through basketball shoes… Who would have dunked it? Although I’m not one to rock Jordan’s or AirForce ones or whatever styling of Nike, I admire the skinny jeans whose shoes out bag their pants.

For our Chicago readers, be sure to check out Bully in the Hallway at the Double Door’s “Rock Stimulus Showcase” this Thursday, Jan 28th for free!

Listen: Bully in the Hallway