The Avett Brothers used to be our secret. We used to be able to see them in intimate Atlanta venues like The Drunken Unicorn and The Variety Playhouse. However, if their sold out show this past Friday at the Fox Theatre is any indication… we better get ready to share.

This isn’t too surprising of a realization. If you’re used to attending Avett shows, you’ve noticed that the crowd has grown in both size and in diversity — especially throughout ’09. Their relentless touring and recent Rick Rubin-produced album (2009’s I and Love and You) have done a lot to increase their fan base. But they have made a few changes to rope in the older fans, too. This past year, the trio added a drummer to help out on about half of their songs, which may come as a surprise to anyone who is used to the stripped down three man band.

The Brothers did a good job in booking an opening act with similar intensity. Langhorne Slim bounced around the stage, kicking his hat, falling to his knees, dancing to the music, and screaming into the microphone. His lyrics also echoed some of the same honest, relatable thoughts (“I’m no ordinary man/I don’t want to be/I want to be extraordinary”). After Slim’s set the curtain was lowered and everyone got ready for the main course. 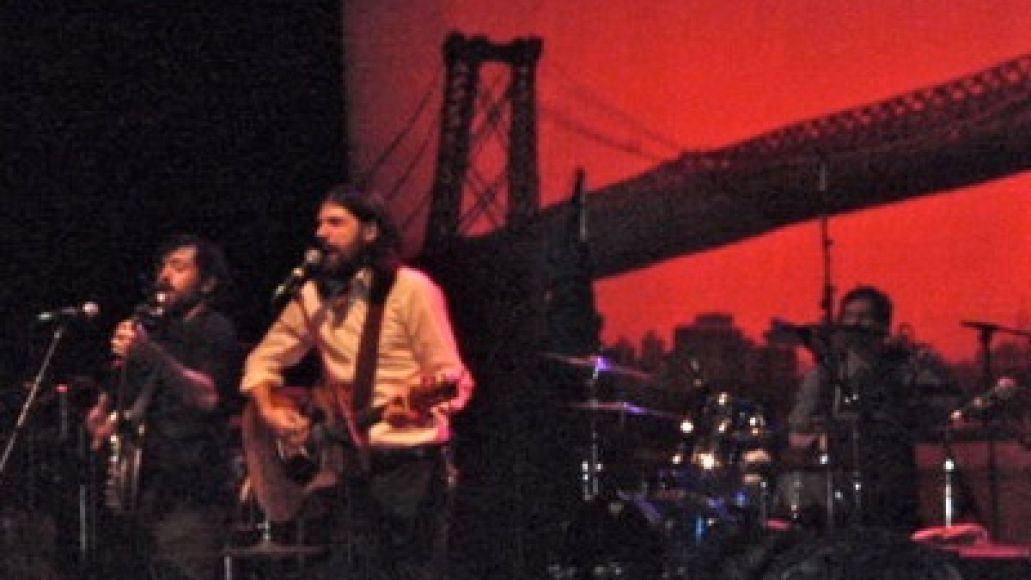 The Avetts opened with “Colorshow” from their 2006 album Four Thieves Gone, which really helped the older fans feel at home among all the new folks. It also helped all of the older fans recognize each other as they screamed out the lyrics, leaving those that were only fans of the new album to just look on. Regardless of their allegiance, however, all fans began to dance around and mirror the energy of the Avetts, who really gushed during the new material. In fact, any doubts about the new songs off of I and Love and You were dispelled as nine of them were given the trademark, bold live treatment.

Have no worries about the set list, though. The Avetts effortlessly weaved old songs in with new ones throughout their set, moving from “Head Full of Doubt/Road Full of Promise” to “Shame” and “Paranoia in B-Flat Major” before moving on to three straight songs off their latest. To spoil the crowd some more, the Avett Brothers even played “I Killed Sally’s Lover” from 2003’s A Carolina Jubilee.

The crowd seemed to really react to a lot of the honest and vulnerable lyrics that have started making the Avetts Brothers a household name. So much so, in fact, that loud applause peaked during “Murder in the City” (“Always remember, there is nothing worth sharing/Like the love that let us share our name”) and “The Weight of Lies'” (“The weight of lies will bring you down/And follow you to every town/Cause nothin happens here/That doesn’t happen there/So when you run make sure you run/To something and not away from”).  With so many fans basking in kindness, honesty, and sincerity, maybe it’s cool to be nice again.

Before heading out, the Avetts played “Kick Drum Heart”, and followed it up with an encore that sported intense versions of “Laundry Room” and “Talk on Indolence”. The band ended the show the same way they began it, by thanking the crowd. No thanks necessary, because if this first show is any indication of how 2010 will treat them, we should continue to expect career defining sets that are loud, honest, and intense as ever. Something to be learned: A few things have changed at the Avett Brothers shows, but the things that matter the most have not.

Setlist:
Colorshow
Head Full of Doubt/Road Full of Promise
Shame
Paranoia in B-Flat Major
January Wedding
Slight Figure of Speech
Tin Man
Go to Sleep
Please Pardon Yourself
I Killed Sally’s Lover
Murder in the City
And it Spread
Weight of Lies
The Perfect Space
I and Love and You
Will You Return
Bella Donna
Kick Drum Heart
Encore:
Laundry Room
Talk on Indolence