Most people of the modern age will remember the 2000 Presidential Election forever. Some might dismiss this event, but a majority of American citizens will always remember watching George Bush and Al Gore butt heads as the new millennium dawned, then complaining about the recount in Florida (opposing viewpoints on the complaints), and when Bush inevitably stomped Gore in the final moments only to drive our fine nation into the ground. Most people will remember this, but what people who appreciated rock ‘n’ roll of that era will remember is one band who (in actuality) wanted neither party to succeed. Gore or the son of a drug lord? None of the above.

It was at this point Rage Against the Machine was by far the coolest band in mainstream music (other than Dr. Dre, his posse, and Blink 182). This was because in the year 2000, Rage’s message began to make a lot more sense to the masses. Suddenly “Bulls on Parade”, “Testify”, and “Guerilla Radio” had a more direct influence on people’s trains of political thought. Some might call it a fan base, others a revolution. Rage was (at least one should assume) going for the second term. Therefore, it is virtually no surprise that Zack de la Rocha, Tom Morello, Tim Commerford, and Brad Wilk decided to join the protests against the upcoming battle for that circular room in the White House. 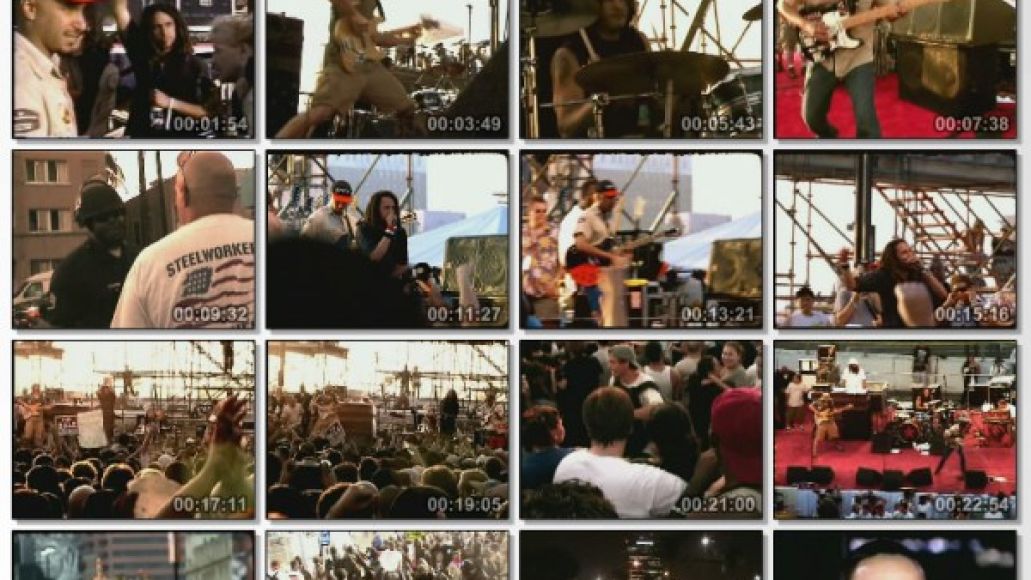 On August 14, 2000, the Democratic National Convention was being held at the Staples Center (Kobe Bryant was not present) in downtown Los Angeles. After a series of legal disputes with local law enforcement, it was (somehow) deemed alright that Rage Against the Machine be allowed to play a free concert, outdoors, in downtown LA, right across from the convention. It was also deemed alright that the event be filmed and due to such carelessness from the state of California, Rage was able to put on one of the best shows of their career.

They took the stage around sundown and de la Rocha made quite the entrance, pointing to the Staples Center saying, “There’s another show going on across the street, but it’s all sold out.” And then like magic, a beautiful and elegant (and effect filled) intro solo began from Morello. de la Rocha, however, was not done. “Brothers and sisters, our democracy has been high jacked!” He informed the masses as they cheered for the mayhem about to take place, “We are not going to allow these streets to be taken over by the Democrats or the Republicans!” And then de la Rocha knew just how to take it to the next level, “This one’s called, ‘Bulls…..on……Parade!’” That’s when everything went nuts and the crowd proceeded to destroy one another (observe the shots of the mosh pits). After a set of about eight or so songs, the LAPD basically said, “Fuck it, cut the chord,” and shut down the show via helicopter. This prompted the thousands of (angry) people to turn on police and riot while the band played an epic closer of “Killing in the Name”.

This was one of the last shows by Rage Against the Machine prior to their hiatus which occurred just a month later. The band’s sound, fury, and political activism shaped the younger crowd of the Bush generation into angered citizens who suddenly had a sense of awareness as to what was really going on. This show may not have been the exposing factor of Rage Against the Machine, but it showed the world why they had become a band in the first place: to spread a message. Rage didn’t disillusion teens in the ’90s the way Korn, Limp Bizkit, and Slipknot did — it opened their eyes. It was revolutionary and watching the band spread their message at the 2000 Democratic National Convention proves they were doing something bigger and better than just rock ‘n’ roll.