In the next installment of Flaunt Magazine on CoS,  Nate Jackson introduces to us to the many talents of Gang Gang Dance bass playing front woman, Lizzi Bougatsos...

It’s Valentine’s Day 2009. Lizzi Bougatsos is standing in the parking lot of Club Paradiso in Amsterdam, her band’s equipment lying melted and burnt on the asphalt. Just hours ago, New York’s tribally eclectic art rockers Gang Gang Dance had stored their gear inside the club after finishing the first gig of their European tour. When they returned for it they found remnants of an electrical fire that torched every musical possession they owned.

“That situation was like what the Mayans project in 2012,” says the band’s drum-wielding front woman. Despite the fact that GGD trades in a signature, beat-heavy genre cannibalism, they probably never counted on their instruments being the ones devoured. “It was really the world turning over for us,” Bougatsos says.

Diving further into a conversation about her provocative sculpture, performance, and culture-kitsch, she reveals her humorous side through a sharp Long Island accent. “My art and my music are chaotic,” she says, “and that’s where the good shit comes out. It’s like an apocalypse in my mind, what I’m making.”
For Bougatsos, the sliver of time she’s spent with Gang Gang Dance since 2002 (or I.U.D, her noise rock side project with longtime friend Sadie Laska) is evenly matched with her experience as curator, poet, and performance artist.

This endearing, frazzled mentality spills onto everything she creates. Odd scraps of culture, emotion, and texture collide to make each undertaking a train wreck of genuine expression, be it an eye-popping conversation piece, magnetic whirlwinds of stage charisma or a healthy administration of self-deprecation. Case in point: her 2009 self portrait—a conglomerate of metal, cloth, and broken shoes (hinting at her upbringing as a cobbler’s daughter in middle-class Long Island), crowned by a hacked up, duct tape-bound Donald Duck mask.

“Donald Duck”, she explains, “is how I see myself in the art world, sort of this idiot savant, or decapitated chicken with my head cut off.” It’s one of the latest in a world-traveled body of work–everything from a series of generic posters freaturing toothy, unsuspecting models defiled by ceramic braces and unibrows to a giant cardboard bird house crowded with hanging pork loins and life-size cut outs of David Copperfield and Jessica Alba. All of her mildly perverse works point to an eccentric, comical, cavalier soul who shares slivers of her world by collecting the garbage from ours.

“When people ask me to make art, I just take it as a comical experience,” she says, “because really, the whole idea for me of letting people see my world, I can’t wrap my head around it half the time.”

Bougatsos and GGD keyboardist/programmer Brian DeGraw are separately represented by the thriving James Fuentes Gallery in New York’s Chinatown. In 2009, she was featured at The Breeder Gallery in Athens, Greece and was one of sixty artists appearing in New York Minute, a recent show at Museo d’Arte Contemporanea Roma (MACRO) in Rome.

Fronting a band is only one facet of her arsenal. Nevertheless, this facet may very well be the most important of her output for the legion of hip urbanites who await Gang Gang Dance’s follow-up to 2008’s Saint Dymphna. The new album is being recorded in January.

Bougatsos has chosen to look toward the future with her art and her music to find inspiration from places more immediate and sometimes just as painful. “I think art-wise, the last thing I got inspired by was jury duty at criminal court,” she says with a giggle. 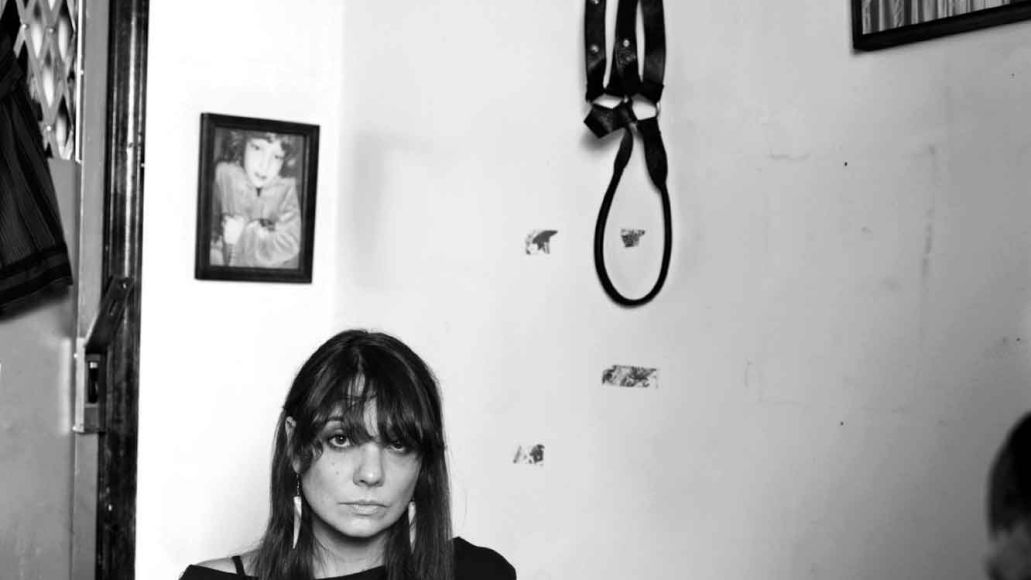 Flaunt on CoS: Lizzi Bougatsos: Poking holes in the stuffy art world