St. Vincent‘s sold-out Thursday night show at Metro began on a peculiar note, which was fitting for a peculiar artist. Playing to an enthusiastic and surprisingly packed house for an opener, Wildbirds & Peacedrums delivered an impressive 40-minute set of pop-rock that was rhythmic without being catchy. The Swedish duo and married couple Mariam Wallentin (lead vocals) and Andreas Werliin (percussion) are the Scandinavian Ting Tings, only with Lykke Li fronting the act. Wallentin is the consummate leader, howling like My Brightest Diamond one minute and growling like PJ Harvey the next. In a satin frock, she switched between drums and just hand claps. Meanwhile, Werliin was unrelenting as he banged on his drums to the point that one stick broke and nearly hit Wallentin at one point.

Their songs lack conventional pop structure, and Wallentin often played with words so much you couldn’t decipher the lyrics. But between the powerful rhythms and the occasional jam session, which would have bordered on self indulgent were the duo not so compelling to watch, the set felt like one extended experiment that Wallentin and Werliin concocted as they went along. Still, even at their most confusing, Wildbirds & Peacedrums proved to be an opener worth catching and, compared to a set I saw approximately a year ago, their performance is tighter and more disciplined than it used to be. They might not ever be household names, but they’ll continue to earn a reputation as a live act to watch. 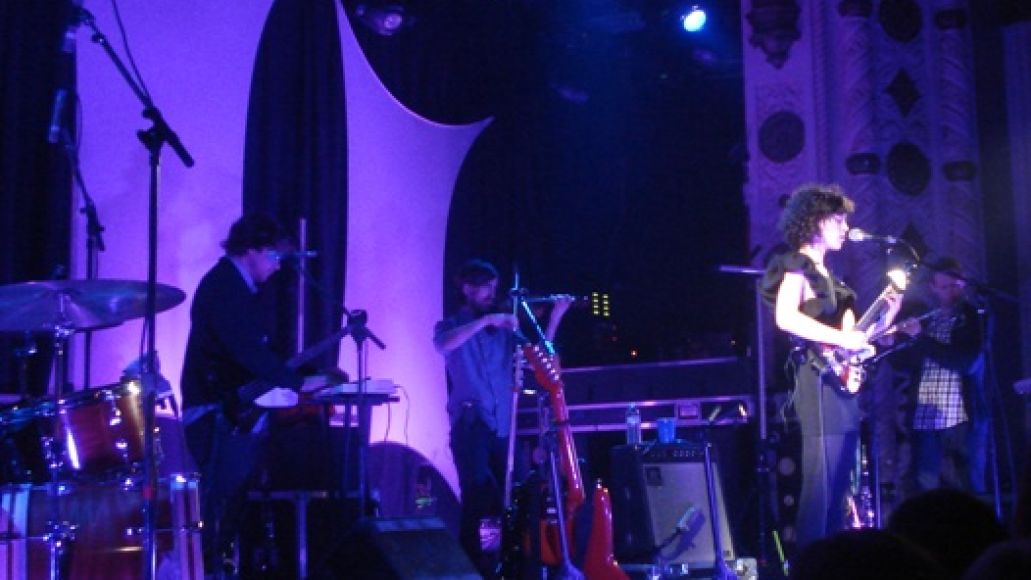 After a brief set change sound-tracked to Prince, Annie Clark (aka St. Vincent) and her four-piece band strolled onstage to Ice Cube’s “It Was a Good Day.” The petite Clark and her American Apparel-ready band were hilarious contrasts to Ice Cube’s chronicles of drugs and sex. Set against a simple backdrop of tense, white tarps and stray LED light scrolls, the five musicians launched in “The Strangers”, the opening track from last year’s stellar Actor. “The Stranger” and most of Clark’s songs are brief, clever, and unassuming. At times the melodies stray off course into something jarring, and at other times the music rises into a deafening crescendo. Then, just as you’re getting used to the new sound, the track is over. This song template was a microcosm of the setlist. With little pause, they worked their way through some of the album’s more rhythmic tracks, including the frantic “Actor Out of Work”, showing that they could be a rock band as well as a pseudo trip-hop act that gets the audience bobbing its head.

Clark’s vocals are as smooth live as they are on record, the result of a welcome evolution she’s undergone since she began touring in support of her 2007 debut. She’s always been a talented songwriter and an accomplished guitarist, but her stage presence often toggled between mysterious, goofy, and nervous. Her stoic face preserves the mystery. Even when she’s hunched over her electric guitar, jerking her body as if the currents are running directly through her, her face is as blank as it is on her album covers. And her aw-shucks personality remains, evidenced when she referred to herself as lame for drinking organic tea rather than bourbon between songs. But now she is as confident in her presence as she is in her finger work. During the gritty “Black Rainbow”, she looked directly into-but not at-the audience and commanded, “Set the bed alight and slow / If you want the neighbors work, you’ll have to shout even louder.” Her impressive band (a percussionist, guitarist, and two multi-instrumentalists) slowly took the music from a fluttering melody to a crashing death march. The stage lights flashed from white to red to blue until the band became a throbbing series of silhouettes. 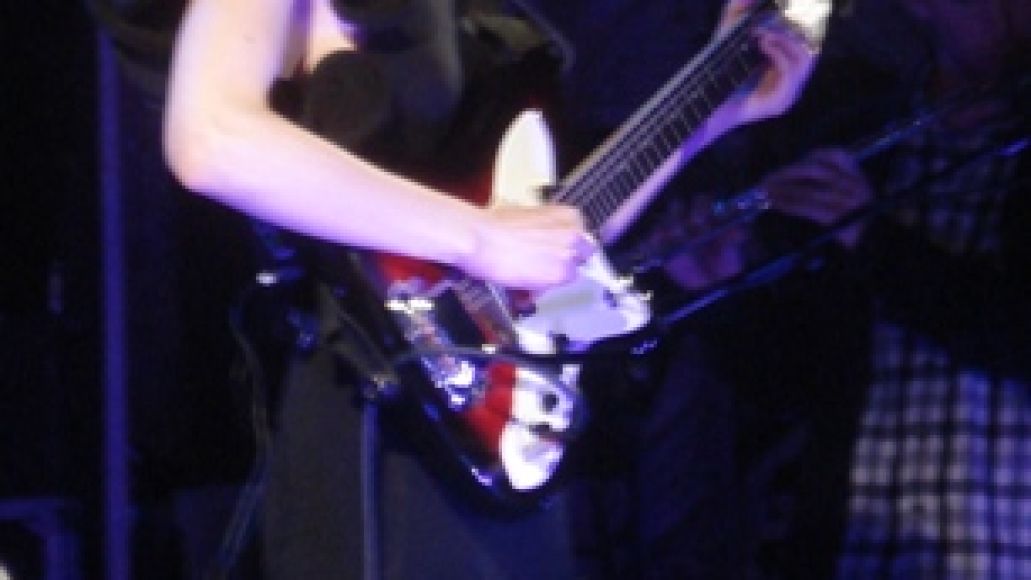 Mid-set, the band left, and Clark explained her reverence for Ice Cube’s “It Was a Good Day”. She analyzed the events of the song and then explained that the following cover was also a favorite of hers that she saw as the folk counterpart to Cube’s track. She then launched into a brief but hypnotic cover of “These Days”, made most famous by Nico. The solo turn proved Clark could command the stage alone, but the band quickly returned to remind the audience just how powerful they could be. The penultimate song of the main set was “Marrow”, an intense jam that belongs on the dance floor as much as it does in a rock hall. Few songs with a clarinet and saxophone can get the crowd dancing, but even the crossed-arms contingent was dancing in place while Clarke pleaded, “H-E-L-P/Help me/Help me”.

For the encore, Clark returned for a second solo turn with “Paris Is Burning”, one of only three tracks on the night’s setlist from her debut LP, Marry Me. The rich orchestration of the studio cut was gone, as was the sarcastic edge. Instead, lit with harsh lights and armed with only a guitar, Clark turned the song into a spooky narrative. No sooner had the final words faded away when her band returned for a bona fide rock version of Marry Me‘s “Your Lips Are Red”, complete with an extended jam midway through and a blinding light show. After Clark silenced her distorted guitar and stood up, she simply waved, thanked the audience, and then the band waltzed off. Much like her records, the fun was over before you realized it.

Setlist:
The Strangers
Save Me From What I Want
Laughing With a Mouth of Blood
Actor Out of Work
Jesus Saves, I Spend
Just the Same But Brand New
The Bed
These Days (cover) (solo)
Black Rainbow
Marrow
The Party
Encore:
Paris is Burning (solo)
Your Lips are Red