Chances are good you’ve never wondered what hip-hop and swing music would sound like combined. Chances are even better that you’ve never pictured the hip-hop sung all in Swedish. If that’s the case, though, you’re really missing out. Disregard any preconceptions you have about what I’ve just described to you, because once you hear Movits!, I dare you not to buy their album. 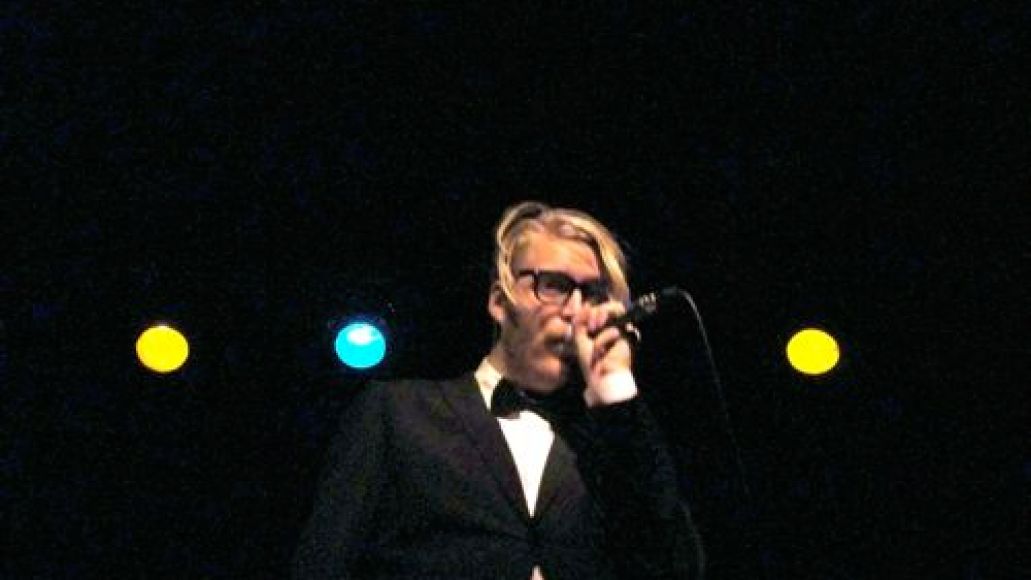 Movits!, a three-piece outfit from LuleÃ¥, Sweden, hit US radars last summer when they were featured on The Colbert Report. Steven Colbert interviewed the band and had them play their song “Fel del av gÃ¥rden” on his show, and “the Colbert bump” was, as they say, history. Movits! spent January 2010 cruising the States, starting in Allston, MA, and working west to California before hitting the Midwest on the tail-end of their tour. I caught up with the band performing at Schuba’s in Chicago, IL on January 31st, and they seemed very excited to have had a chance to explore the country. Explaining what they’d seen so far in Chicago, lead singer Johan Rensfeldt listed “here [Schuba’s], the skyline, the stuffed pizza, and… the [Willis] Tower! We are still shaking from that one.”

The crowd was certainly charmed by the band’s European accents, but even more so by their sound. Movits! is an explosive combination of genres: the quick-spitting lyrics of hip-hop, the crowd-moving thump of big-band style bass, and a deep-souled saxophone that carried the rhythm on a number of tunes in a way that most guitarists dream of doing.

You might think it would be off-putting not to understand the lyrics, but honestly, the more I listen, the less it seems to matter. I’m sure the experience would be enhanced by the having the meaning behind the open, rolling Swedish syllables, but Rensfeldt spits the words with such skill and pure enthusiasm that I scarcely paused to concern what I might be missing. He could stand there and simply beat-box (and indeed, there are some acapella-style backing vocals), and it would still sound like a party, which is Movits!’ strongest talent. It’s simply impossible to listen to them and hold still. Movits! is like an extra shot of espresso in your morning coffee, a dynamite alarm clock that awakens your nervous system with the soul-throbbing joy of a power-driven swing dance throwdown. 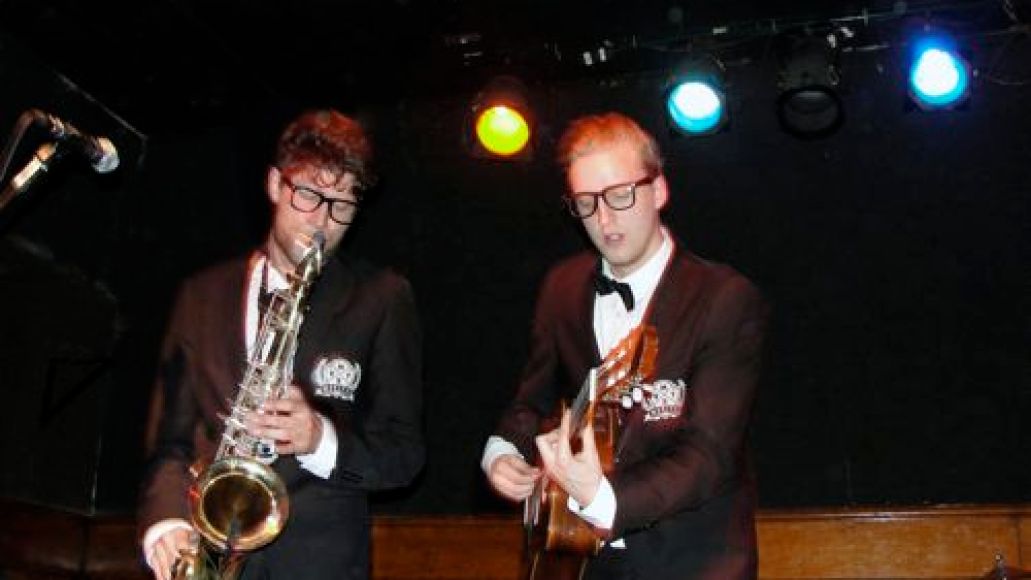 But Rensfeldt is but one in a talented trio of musicians, all dressed in black suits with a university-style Movits! crest on the breast and matching white high-tops. Jocke Nilsson on saxophone rips the melody wide open on a number of tracks. Playing with impeccable velvet tone and a seemingly endless supply of air, Nilsson had perhaps the most exerting– and exhilarating– performance. Without him, the band has a cool hip-hop sound; with him, they are lifted up to true multi-genre territory and straight into swing-band heaven. He played his tenor saxophone, a gorgeous Selmer Mark VI, with a gusto and a talent rarely seen, well, anywhere. The sheer amount of air he put through that horn was staggering, and yet he never seemed winded as he chimed in on the backing vocals only seconds after pulling the instrument from his mouth. All three men danced and leapt about the stage as the music carried on, pausing only briefly between songs to chug some water and accept a generous helping of applause.

Anders Rensfeldt, the man Johan frequently referred to as “Maestro”, was the power behind the drum machine, and he took his responsibility quite seriously. Though the band played Colbert with a fourth man on stand-up bass, the Schuba’s show featured Anders playing samples of pre-recorded bass and layering over that with an electric drum-pad and turntables. He even stepped from behind his equipment table a few times to don an electric guitar and help fill out a couple songs. And between all these duties, both Anders and Nilsson still somehow found time to sing backing vocals. This is a great young band where the members fill every role themselves; these guys do nothing halfway, and their effort showed.

The crowd ate it up, and unable to hold still, they danced in place around the packed concert hall. All hand-clap requests were fulfilled enthusiastically, and perhaps most impressively, the audience seemed very familiar with the band’s 2009 release, Ã„ppelknyckarjazz. The concert fliers advertised the band “as seen on The Colbert Report“, but most folks seemed quite familiar with the setlist. The crowd went wild when Johan announced the names of the album’s showpieces, most notably “Tom Jones” and the album’s title track. Before he sang “Tom Jones”, Johan took a moment to explain the song’s hook to the audience, aware that most people in the audience couldn’t understand any of his lyrics. “We’re trying to bridge the lost in translation gap”, he said cheerfully, giving a brief summary of the song before Anders on the drum machine carried them away. 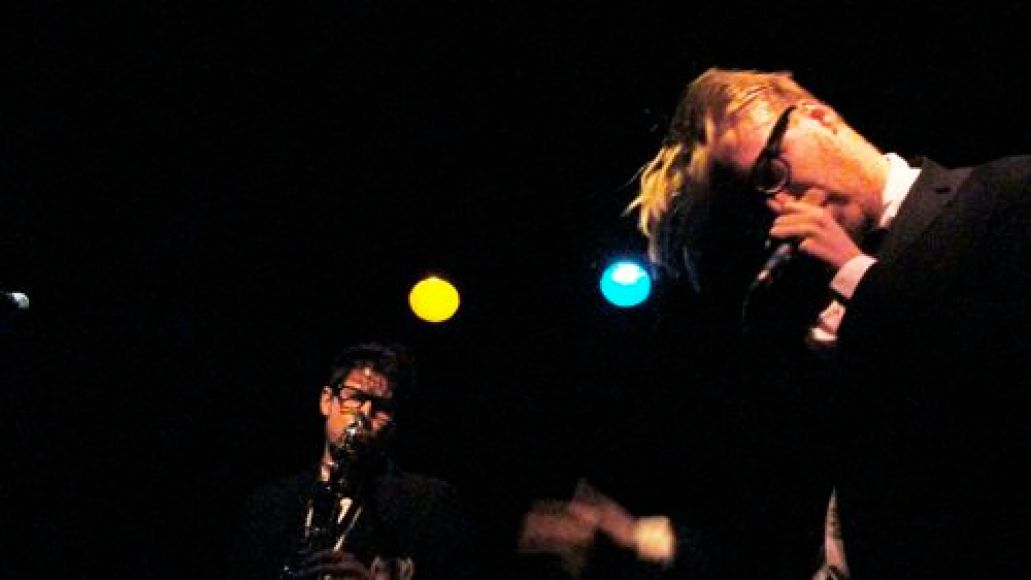 Aside from playing most tracks from Ã„ppelknyckarjazz, the band also debuted several songs from their next album, including one so in-progress that Johan freely admitted there was no third verse; he was just “trying out” the first two. The crowd was not the least bit perturbed, and frankly, the only other indication of its newness was that the computerized backing rhythms weren’t as polished as those for their older material. Another new track, titled “Sammy Davis Jr”, was well-rehearsed and another fine example of Movits!’ signature sound.

The band closed with a short encore, ending on polka-ish party anthem “Vals pÃ¥ VinkelgrÃ¤nd”, which got the crowd jumping and fist-pumping. Sweaty and exhilarated, the men dismounted the stage and threaded through the crowd to sign merchandise and chat with grateful fans. Many people stuck around after the show, faces flushed with exertion, chatting with band members or new-found friends. Language never really was a barrier that night; Movits! sounds like a party, pure and simple, and a party needs no translation.

Which just goes to prove that Swedish hip-hop swing truly is a universal language.