Stepping into Logan Square Auditorium (LSA) feels like going to a school dance; that is, if the school you went to were the coolest damn school in history. A school that only finds the biggest, most exciting acts to play the hypothetical school dances. That sounds great, but it has its downsides, too.

Over the years, I’ve seen some pretty great shows at LSA. A couple months back, I posted a review of a great King Khan and BBQ Show gig. Animal Collective on the Feels tour, Man Man opening for Yeasayer, Joanna Newsom and her band performing Ys, and Belle Orchestre’s horn section emerging from the balcony to join their bandmates onstage are just a handful of highlights. But, the feel of the place, above all else, makes the venue such an intriguing place to visit.

Situated directly above Lula Café, the Auditorium looks as if it was designed as a ballroom for WWII era swing dances. The door to the Auditorium is at street level, immediately leading to a long, steep flight of stairs. Then, after plunking down ten or 15 dollars, you have another flight of stairs to climb to the performance space. And, a warning for other tall people, watch your head: The inexplicable mesh grating framing the stairway hangs a little low (trust me, I’ve clipped my noggin a few times). 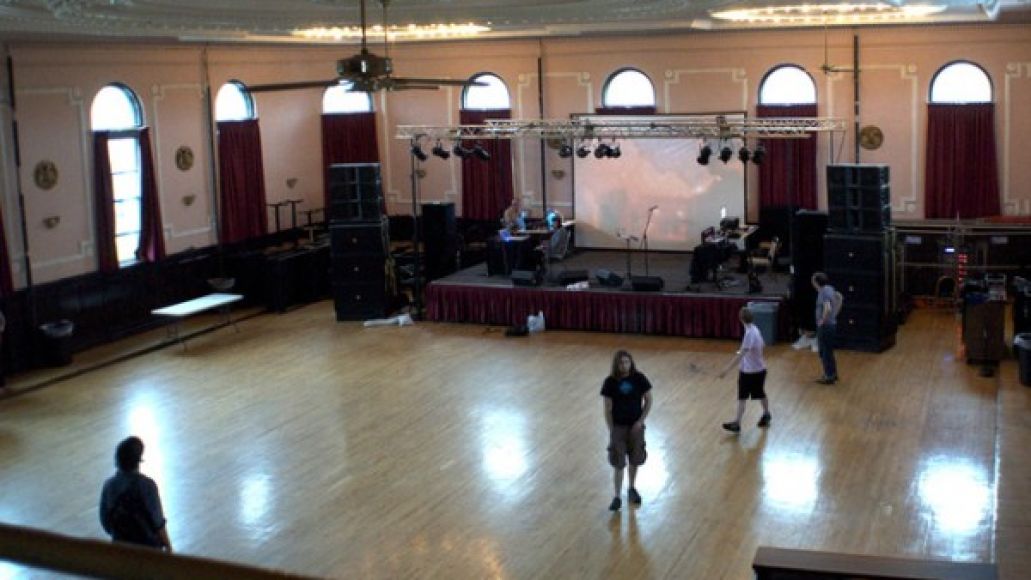 Next, you can stop at the bar for a four dollar PBR (good, not great price there) or wander through the crowd as close to the stage as possible. The LSA is an all-ages venue, so there’ll be some youngsters who got there three hours early to snag a good view. However, the crowd usually spans pretty far age-wise, so no one should feel out of place.

But like those youngsters, you should immediately get as close to the stage as possible. The stage is raised just a couple of feet off of the floor, so visibility won’t be a problem (fair warning: that may be just the tallness in me talking again). But the place wasn’t designed for rock shows, and the louder shows tend to echo or bleed toward the back of the venue. Those brave enough to get in there with the rowdier/dancier/more excitable concert-goers will find the sometimes-heard complaints about sound quality are just those waiting around at the back.

The bands that stop at Logan Square often seem like the type that have gotten too big or draw a younger crowd for the dark, crowded, 21+ Empty Bottle, and/or those that aren’t quite ready for the fan favorite Metro. And, in a way, that’s exactly the charm of it all. It’s a perfect middle ground between small and large (both in capacity and space). It’s all ages, but not annoyingly so. On the other hand, the tickets and beer aren’t cheap, but they’re not too expensive either. The sound may not be perfect throughout the room, but finding a good spot isn’t hard. All in all, the Logan Square Auditorium has to be one of my favorite venues in Chicago. It’s not perfect, but it’s completely unpretentious, consistent, and typically a fun experience.