As many festivals as one attends, there is very little that can be done to prepare for 12 hours of music emanating from massive speakers at 130 bpm while being drenched in the South Florida sun. It may be this challenge which continues to draw record breaking numbers to Saturdays at Ultra. For the first time since expanding to two days in 2006, the event completely sold out. While this would result in unprecedented congestion at the come sundown, the wait time for those picking-up single-day tickets from will call were greatly reduced from the day before.

As the premiere event in dance-music, Ultra continues to increase both international participation and diversity within the ever expanding electronic music genre. Performers from all 50 states and nearly 60 countries performed during the event’s two days, which inherently contributes to the growing number of artists, record labels, and sub-genres. According to co-founder Russell Faibisch, “Dubstep really blew up over the last 12 months, so we decided to combine it with drum ‘n’ bass and create ‘dub ‘n’ bass’.”

With the majority of dub n’ bass performers spinning on the Biscayne Stage, located immediately upon entering the gates, the genres growing popularity became evident as the crowd steadily grew during the mid-afternoon. With most of the crowd favorites not scheduled until after 3:30 pm, fans took full advantage of acts like Nero, Freq Nasty, Planet of the Drums, and Andy C to get limbered up and sweaty for the long day to come. 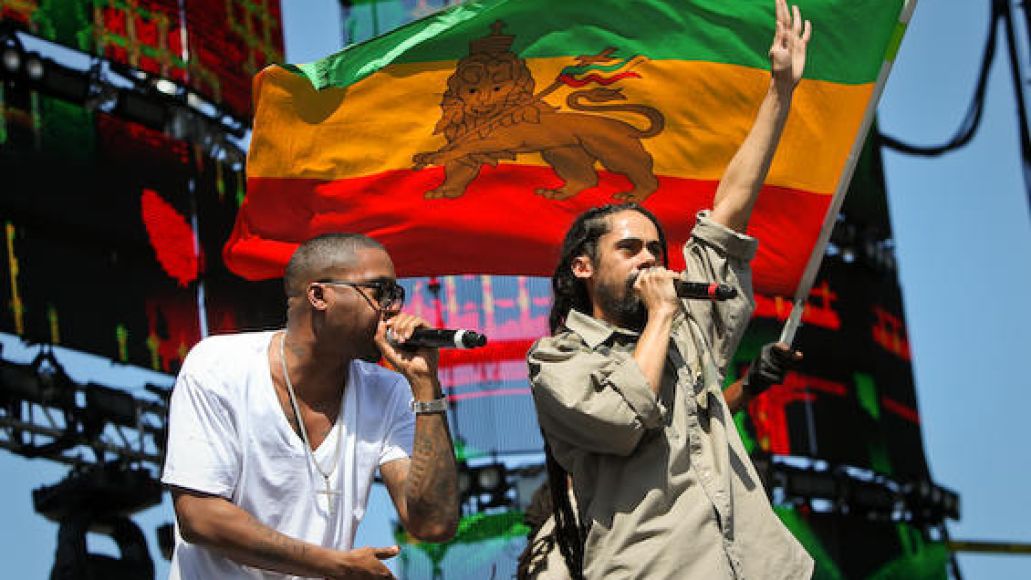 Artist collaborations also highlighted Saturday’s performances. Damian Marley and Nas took to the Main Stage just after 3 pm.  While the group seemed far removed from the rests of the day’s acts, reggae and the Marleys have become so ingrained in Miami the fit seemed slightly more natural. The duo mixed electronic overtones into hits from Welcome To Jamrock and included tracks from the upcoming May 18, release Distant Relatives. While each man possesses a strong individual sound, the back-and-forth between the two vocalists worked well during their collaborative tracks. 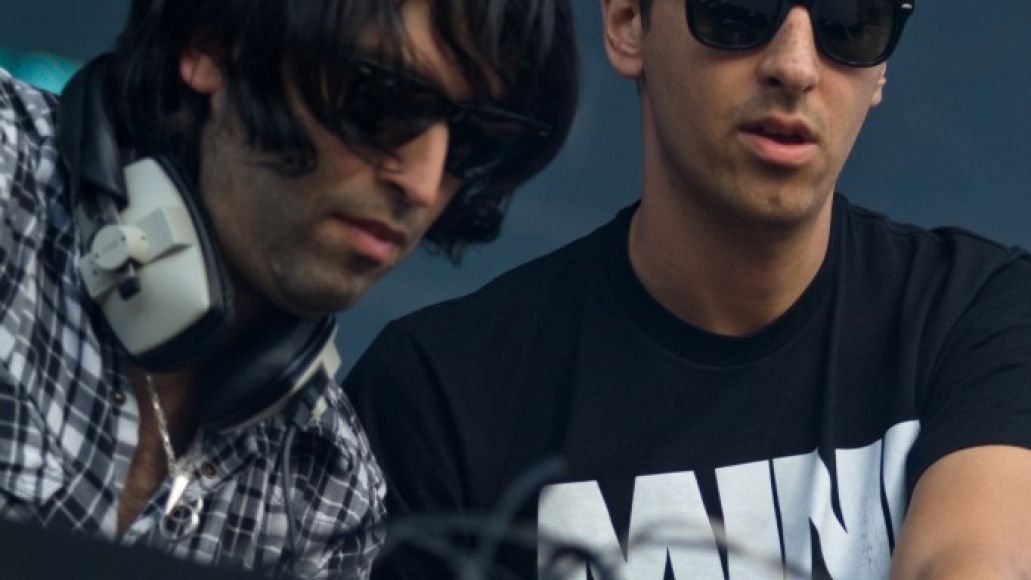 As evening approached, the international duo of German-born Boyz Noize and London-based Erol Alkan took to the Biscayne Stage. Their set marked two events: the first glimpse of Deadmau5 helmets and the only time Consequence of Sound witnessed CDs used for mixing/sampling. Whatever the source, samples from “Lemonade”, “Death Suite”, and “Waves” resulted in high velocity fist pumping and the visually pleasing pogo.  Often it seemed the duo were attempting to play Twister on the turntables, but always managing to become untangled. 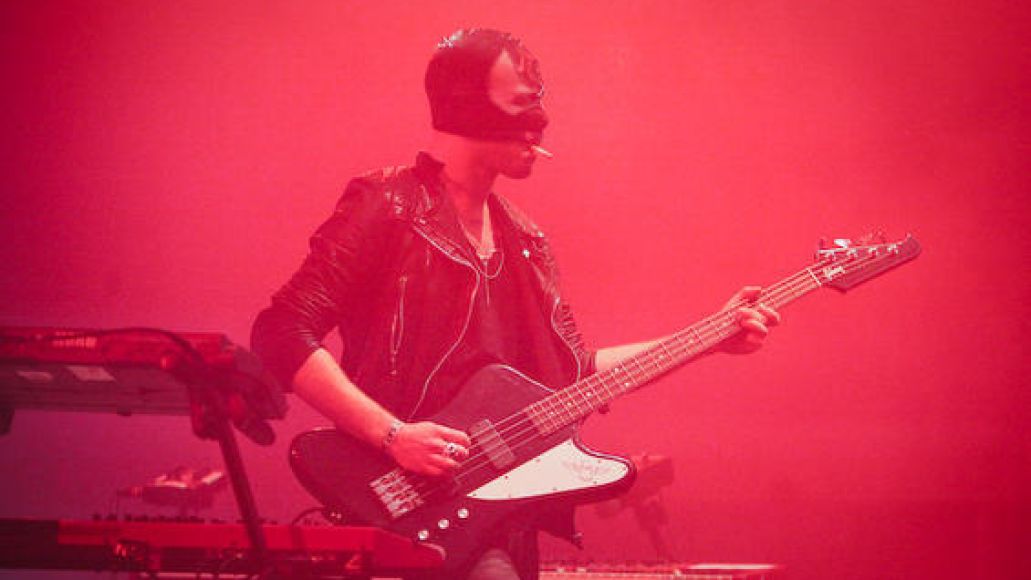 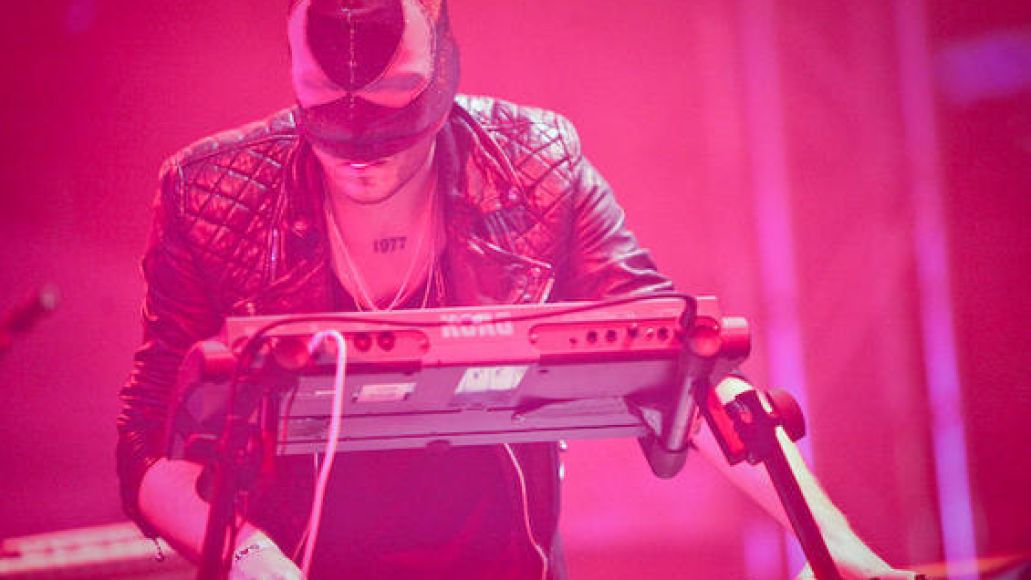 Other than the surprise Deadmau5 collaboration to close out Ultra, the collaboration between Dim Mak founder Steve Aoki and Dim Mak artists The Bloody Beetroots, Death Crew 77 was the most unexpected set of the festival. During last year’s performance, the Bloody Beetroots performed a typical turntable DJ set. Saturday night’s performance included the bass, guitar solos, turntables, vocals, classical piano scales, Steve Aoki stage diving, and a level of energy that seemed unsustainable.  If the Beetroots were not on your radar, put them firmly in the center now! Click here for a video of the madness. 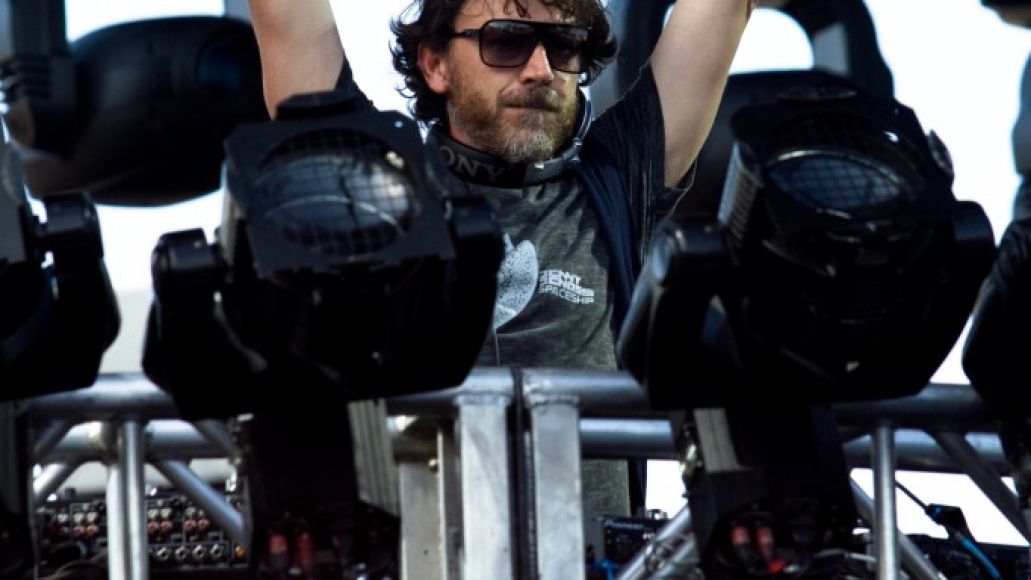 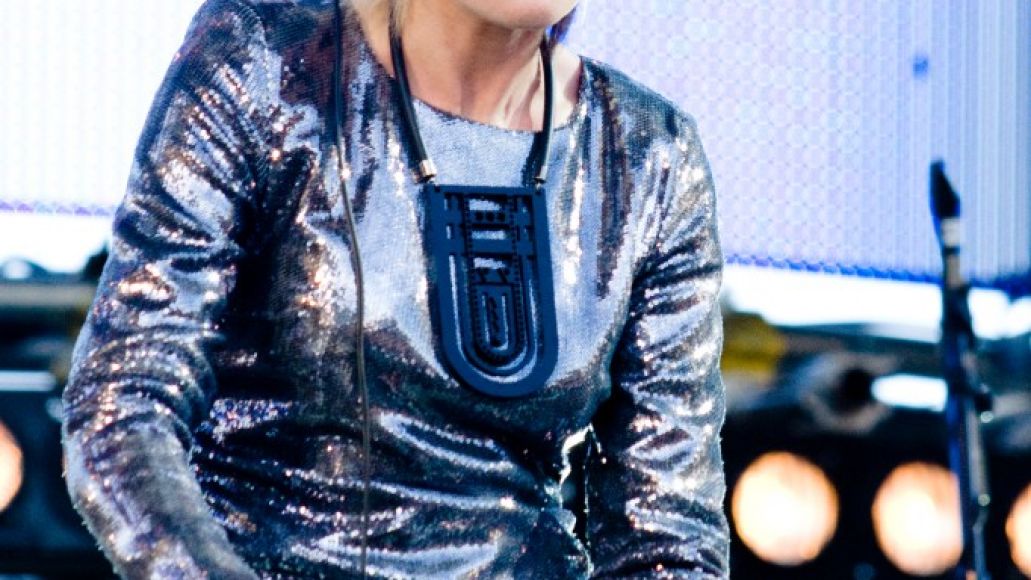 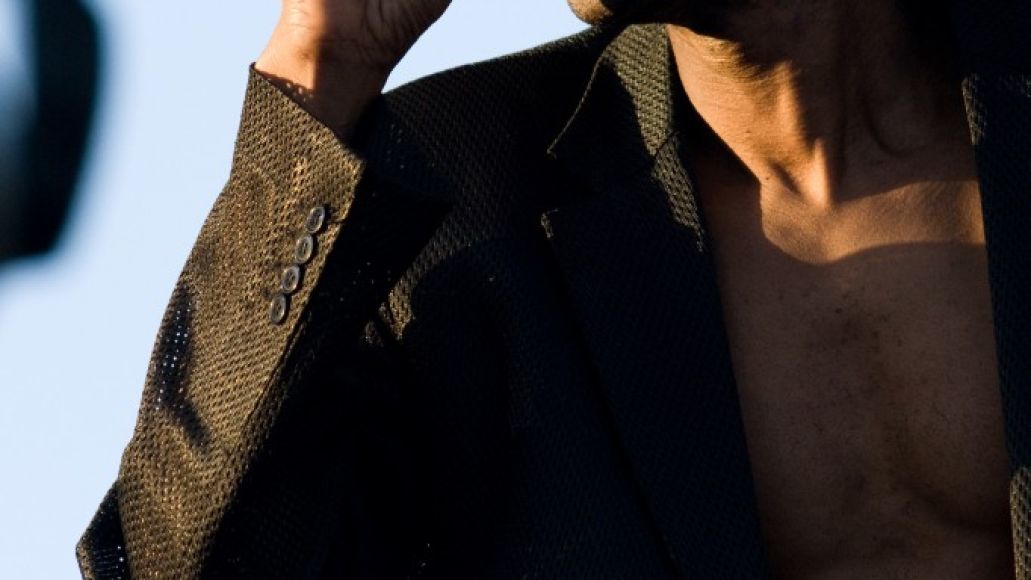 Joined by an additional percussionist, Maxi Jazz and Sister Blizz of Faithless made their South Florida debut at Ultra 2010.  While the audience may not match that of levels in the UK, the Faithless faithful eagerly awaited the opportunity to hear classic singles like “Reverence” and “Insomnia” plus new releases from The Dance. 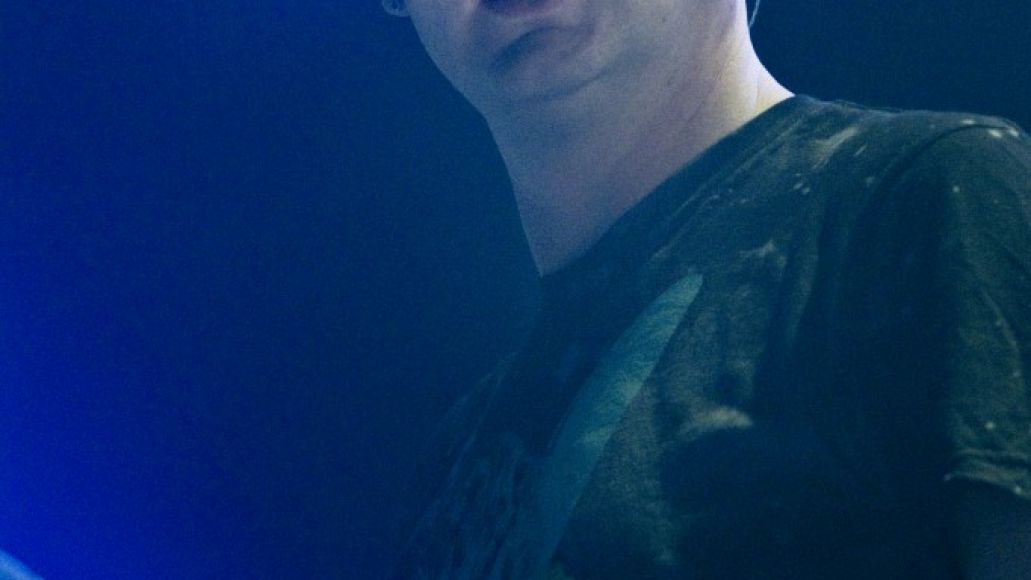 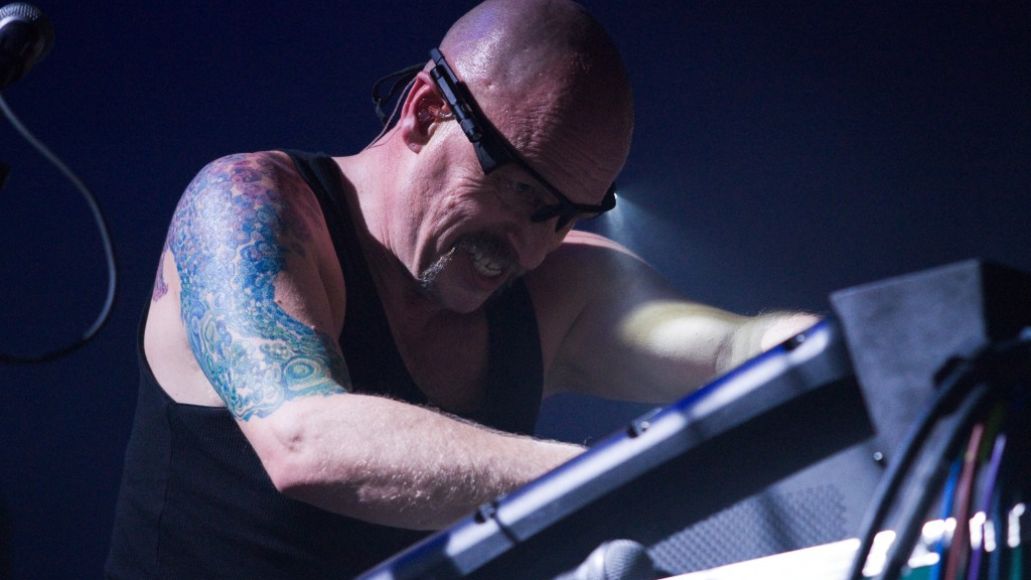 While much of the festival audience had rushed to the Main Stage with hopes of getting close within a mob of 50,000 people, many electronica purists traveled to the Biscayne Live Stage to witness the monumental performance of Orbital. Not having played in the states since 2004, Phil and Paul Hartnoll performed a captivating set. The brothers know all the tricks. With the ability to improvise over complex acid house beats, many would hail the Orbital set as the performance of the festival.

“Satan” sent chills through spectators spines, and the fan favorite “Halcyon + On + On” incorporated samples from “You Give Love a Bad Name” by Bon Jovi and Belinda Carlisle’s “Heaven is a Place on Earth” evoking more emotions than any other house artist would even attempt. To express their gratitude for all those in attendance, the brothers were each kind enough to thank fans for watching them after so such a lengthy hiatus. 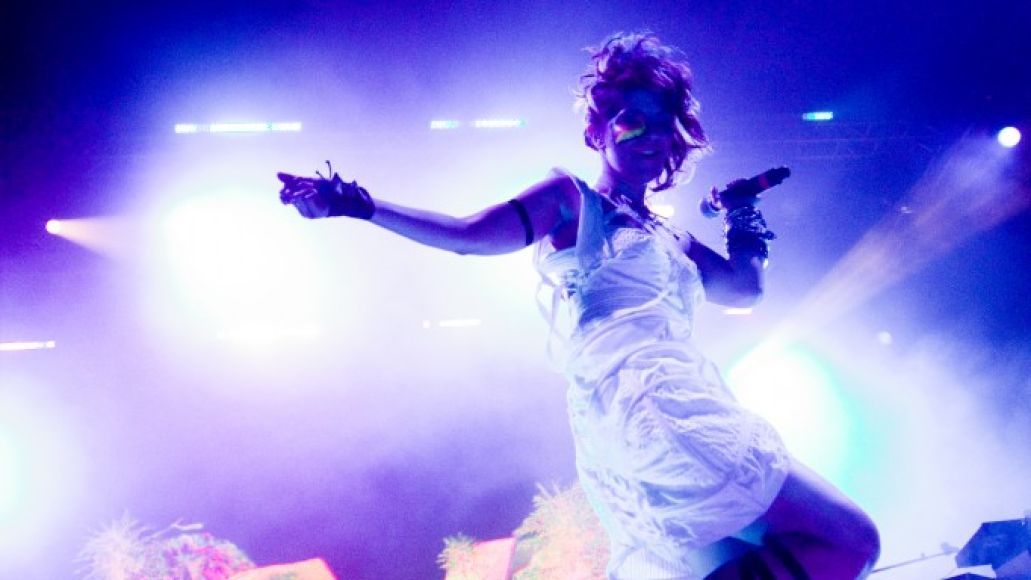 For many people unaccustomed to the local Miami electronic scene, Ultra was the first opportunity to hear the colorful Afrobeta. Even at a festival with 300 acts, this two-some consisting of  Cuci Amador and Tony Smurphio, has a totally unique sound. Located somewhere in-between Peaches, Crystal Castles, and an 8-bit video game, Afrobeta’s bubble-gum house was quite a major shift from the preceding Orbital set.

Prior to closing out Ultra with Deadmau5, festival veterans Ghostland Observatory delivered their brand of Austin-infused electronica to several hundred fans. With a live show that includes dozens of lasers, their famous green smog machine, and glowstick battles, Ghostland’s stageshow fit perfectly into late-night at Ultra. Aaron Behrens and Thomas Turner delivered “Shoot ’em Down”, “Club Soda”, “Sad Sad City”, and “Move with Your Lover” with a level of vigor equal to that of the adoring fans remaining at the stage. 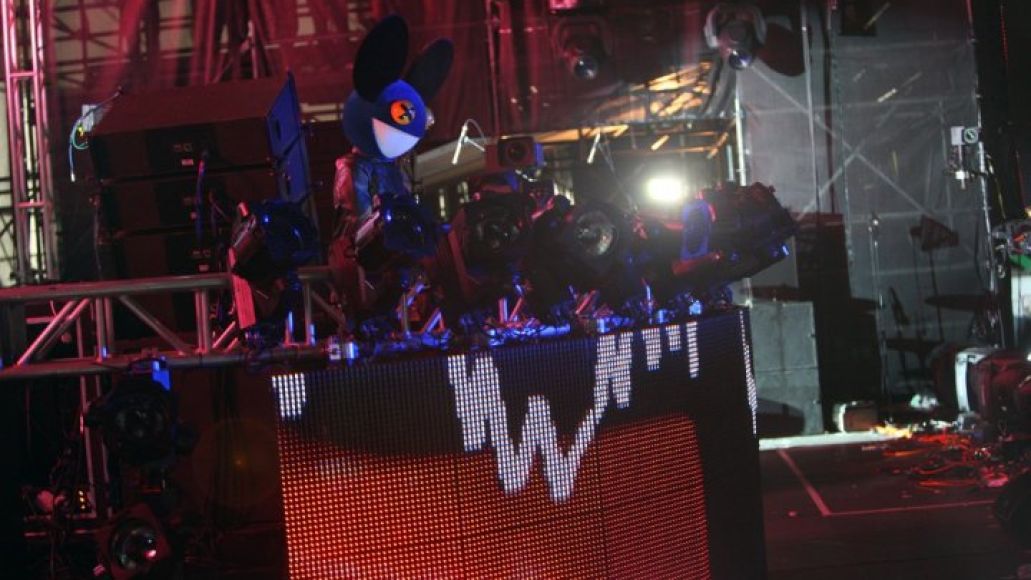 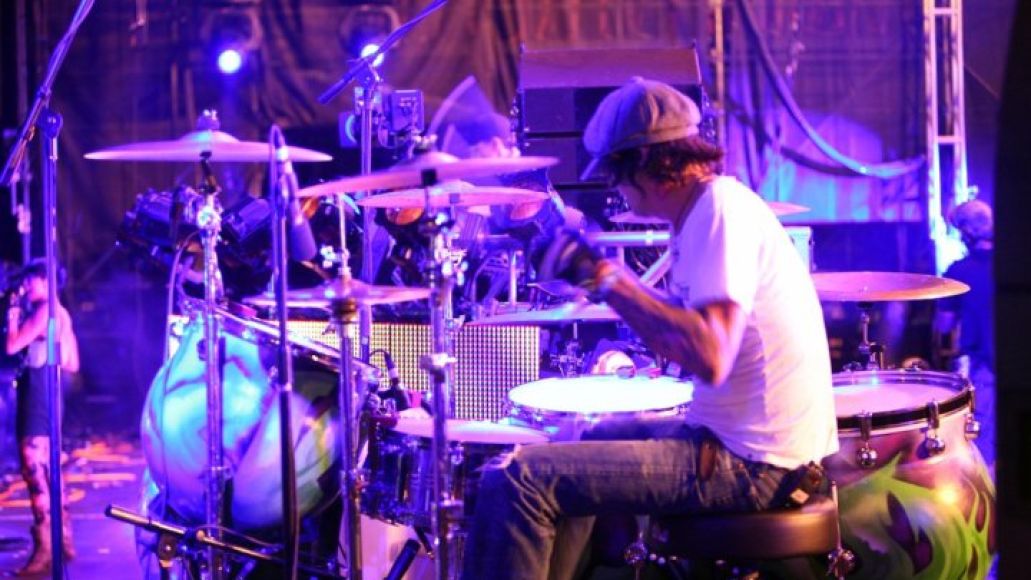 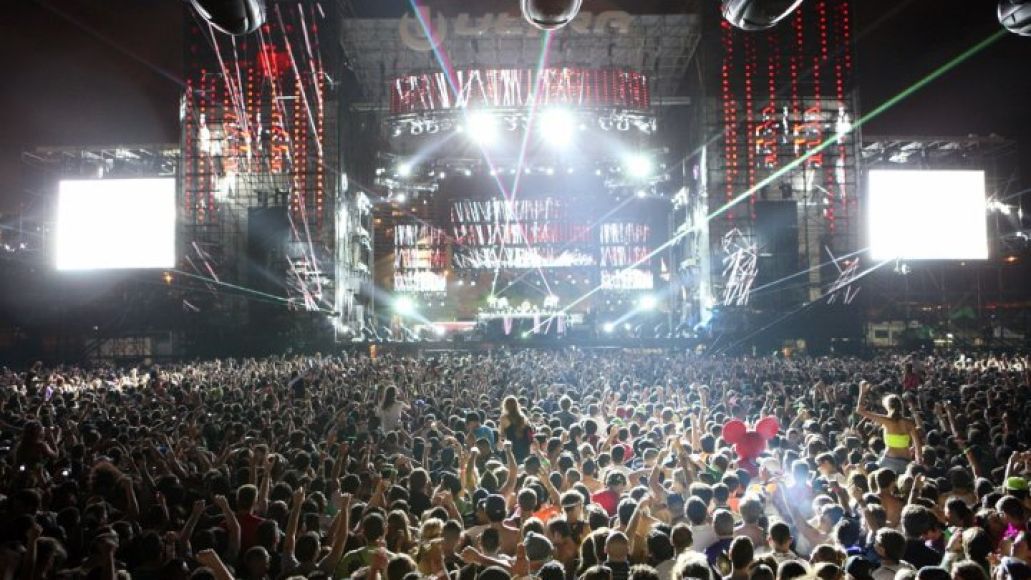 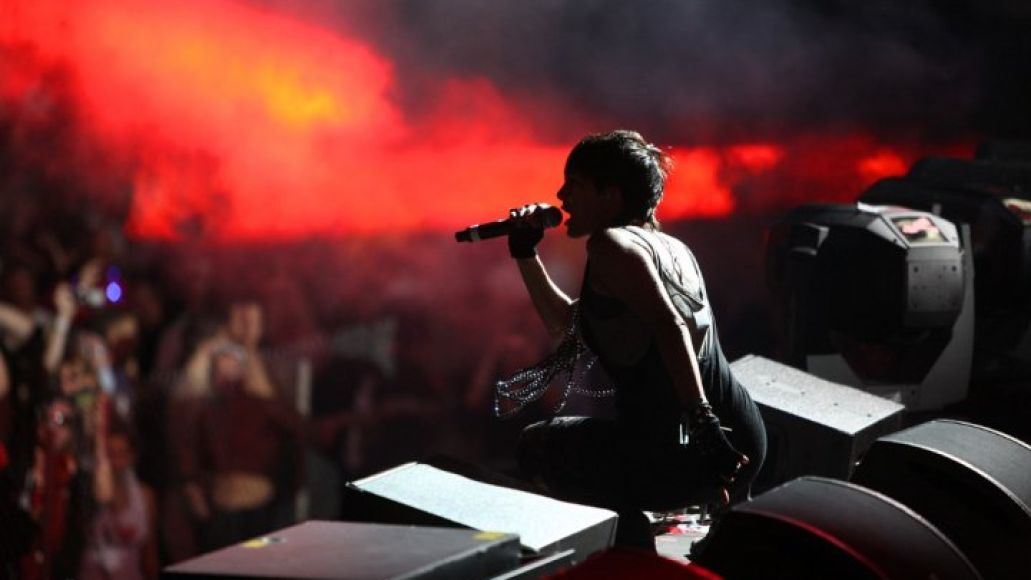 Over the last three years, Deadmau5 has become a perennial headliner. Creating beats with a naturally repetitive quality, Joel Zimmerman continues to keep yearly attendees guessing what’s next, unlike other several other Ultra mainstays. What a better way to change things up than adding Tommy Lee on drums and Sofia Toufa on vocals? Deadmau5 continues to demonstrate his ability to headline premiere dance-events the world over, leading toward IDMA awarding him the Best Electro Track, Best Solo Artist, and Best American DJ awards for 2010.

Expect even bigger things for Ultra 2011. With sold out tickets and a lack of capacity to host any more artists, Ultra 2011 was announced to be transitioning into an even larger three-day event. Sleep feels very warranted, but next year can’t come faster.

All pictures not noted courtesy of Alex Broadwell