The room was small and the air smoky, but the crowd was lively as fuck.

An hour before doors opened at the Culture Room in a corner of a Ft. Lauderdale shopping center, eager concertgoers lined up by the small side entrance door that was right across from the bands’ tour bus.

By 7:45 p.m., empty beer cans lined the trash bins in the parking lot and attendees poured into a small courtyard to purchase t-shirts, posters, drinks, and the like.

Psychedelic instrumental quartet Zechs Marquise opened up the night to a buzzing audience with a fluid set that was both fast and decadent.

The energy in drummer Marcel Rodriguez-Lopez’ quick, booming busts filled the insides of the modest venue while guitarists Matt Wilkson and Marcos Smith exchanged wicked solos and other-worldly hooks. Bassist Marfred Rodriguez-Lopez fused the melodies together in decisive bass lines, and his onstage chemistry with his drummer (and brother) was plainly evident throughout their short set.

Although their performance may have averaged to half an hour, Zechs Marquise stunned the crowd, many of whom were unfamiliar with the group’s unique sound. It’s a lot like a nocturnal jam session: drawn-out, mysterious, and spotted with outbursts of overriding force.

At an instrumental show in a crowded warehouse-style room, it’s always difficult to recognize specific tracks. However, the men in Zechs Marquise included numbers from their upcoming CD, a less ambient work set to be released sometime during the second half of this year.

Shortly after the overwhelming response from the crowd died down, The Builders & The Butchers took the stage.

They employed two percussionists and a banjo player, which were the drive of their sound. Bar-like acoustics won’t always be the best: Loud drums may overpower vocals and guitars, but The Builders & The Butchers screamed and danced through the snares and cowbells.

Their plaid-shirted lead singer hollered through cornets and what looked like a metal spittoon with the bottom cut out. Both the bassist and banjo player backed him up and at times the drummers switched around to keyboards. The crowd dug it.

Then, roughly around 10 p.m., the stage began to shape-shift into what would be the Rx Bandits’ set.

The increasingly expectant audience milled around the floor. Anyone from blonde, dread-haired hippies to young girls and their moms bustled through the room. Every time roadies stepped onstage or tuned an instrument the cheering crowd climaxed, until the band finally lined up about a half-hour later.

Lead guitarist and vocalist Matt Embree rushed onstage and the remaining Bandits followed him, about to burst into a fast-paced musical melee. They pumped the place with a mix of old and new songs for about two hours, including a well-deserved encore that the crowd demanded. Their animated set was comprised from tracks from as far back as Progress (2001) to their latest, Mandala (2009), and everything else in between.

The mood changed in the audience when tracks like “Consequential Apathy” and “Dinna Dawg” surfaced; Embree asked for a dance party, and that is exactly what the Culture Room became. Drummer Chris Tsagakis and bassist Joe Troy played off each other in a back-and-forth of rolling drums and guitarist Steve Choi also killed it on the keyboards.

The Bandits usually break into long progressive solos during live shows, and this one had a good amount of them. Aside from Choi’s butterfingers clicking away at the keys like it was nothing, late in the show he called Marcel from Zechs Marquise onstage to join in on a 3-drumset free-for-all.

The highest point of the show before the encore was probably the breakout of “Only for the Night,” one of the band’s most popular songs. When they came back to close the evening, the roaring attendees danced, bumped and sang along to classics of “Decrescendo” status.

After the show, we got a chance to exchange a few words with Marfred Rodriguez-Lopez of Zechs Marquise. The smiling bassist hung out by his brother Marcel, as they, along with Wilkson and Smith, signed autographs and posed for pictures, eager to be approached by the sweaty throngs.

And this is why, kids, it’s always best to see your favorite bands at tiny venues: They hang out by the bar and merchandise area, waiting for you to chat it up with them.

First off, could you introduce everyone in the band?

I’m Marfred I play bass; this is Marcel, drums; Marcos over there plays lead guitar; and Matt’s rhythm guitar.

How long have you been together?

So you’ve got a second album coming up?

Yeah, we’re getting ready to put it out. It’s our second full-length; we put out an EP before our first record. [Our Delicate Stranded Nightmare]

What’s the new one called?

I have to ask, where does the name Zechs Marquise come from? Did you choose it because all your names start with an “M”?

No, that’s a complete coincidence. The name comes from a character from an anime called Gundam Wing. He was my favorite character on the show, and when we were looking for a name I randomly brought it up at practice, just goofing around. Everyone liked it, so I guess we decided we’d go with that.

You’re an all-instrumental band. How do you find is the audience reaction to that?

A little different because they’re used to having someone sing or singing along with someone. It can be challenging sometimes because instrumental music isn’t exactly for everybody; I guess it takes a certain type of person to like it. But we kind of try to change that a little with the guitar melodies we use.They’re kinda like something that someone would sing but instead they’re being played on the guitar.

So instead of having the vocal aspect you just add guitar melodies on top of your music?

Exactly, exactly. And then it’s very rhythm-heavy to kind of give it more of a dance feel, I suppose.

How did you get on this tour with the RxBandits?

Last July they asked us to do a tour with them. They were co-headlining a tour with Dredg, and they had asked us to open up two of the weeks. Already by the second or third day we hit it off real, real well and ever since then we’ve been really good friends with Rx.

And you guys are on the same label, right?

Same label, yeah, yeah. So naturally, when it came down to this tour, when management was like, “Who do you guys wanna take?” they’re all, “We want the Zechs guys.” [Laughs] We’re all very good friends.

Since you [and Marcel] are brothers, does that affect band dynamics?

No actually, not at all. It affects it in a good way. We’re very… we’ve spent so much time hanging out with each other and obviously growing up that we can kind of, you know. I guess it’s like—it sounds really cheesy, but it’s like a telepathic thing.

How old are you guys?

Yeah, we’re almost twins. It’s what we used to tell everyone when we were kids.

Have you been playing music since you were little?

Well, since our teenage years. I picked up the bass when I was 15 and he started playing drums when he was 13. A little before that we used to play a little bit of guitar but never really took it seriously. It wasn’t until I was about 18 and he was like 16 that we started taking playing our instruments pretty seriously.

So what are you going to do when you finish this tour and with the new CD?

After this tour’s over we’re gonna finish [the album], and then hopefully have it out for the next tour. It should be out, the way it goes. [We will] definitely go on a nice, long 6-week or 4-week tour when the record actually does come out.

How long is the new record going to be?

The album is eight songs, I think it’s 40-45 minutes long. It’s not as long as the last one, not as spacey. It’s more in-your-face, a lot quicker, kind of giving it all at once. It’s gonna have more of the feel of our live performances as opposed to the more ambient nature of our first record.

How would you classify it in terms of genre?

I guess, [turns to Marcel] what do you call it? Uh, sci-fi funk something-or-another? [Laughs.]

That’s great, hope it gets you paid! 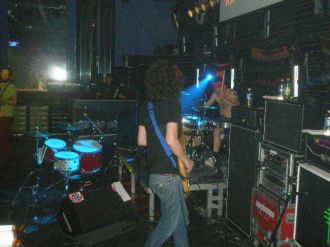 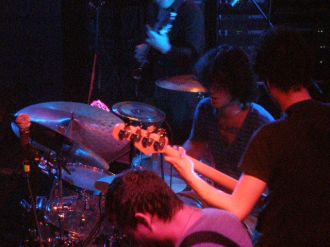