While walking down West 52nd Street, the two neon red “Roseland” signs outside of this venue make it hard to miss, and passers-by can look up at the old movie theater style marquee to find the latest attractions. The view held by many, including most Consequence of Sound writers and readers, is that the Roseland Ballroom is well known as one of the best and most accommodating venues that New York City has to offer.

Once walking into the building, past the ticket windows and merchandise table, is the entrance to the venue itself. Upon entering the room, it’s hard not to stare in awe. With the bar built into the back wall, the area in front of it stretches to fit an impressive 3,200 people standing. With incredibly high ceilings, it also supports a balcony that holds an additional 300 people.

The entire room is always set up to impress. Sometimes with draping sheets and tables, while at other times with an unbelievable light show, the decor varies with the tastes of the performers. For instance, during a recent show by The Mars Volta, a brightly colored and intricately designed drape changed colors behind the band during its performance, with bright lights changing to fit the intense vibes of each song. The Roseland Ballroom perfectly matched the personality of this crazy and phenomenal band.

As if the stage and surrounding area isn’t enough to look at already, Roseland also has a downstairs area that adds a unique touch to the venue. With a space modeled with numbered ticket booths surrounding the entire room, one stand is open to check jackets, while others often go unused. There are also a few tables set up where people often sell small items, such as buttons. 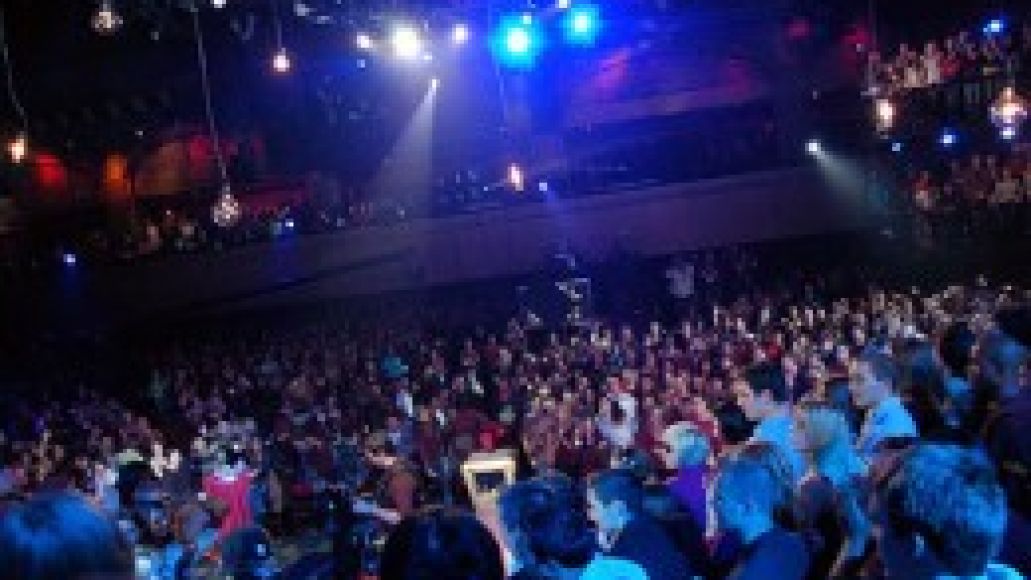 Even the bathroom is impressive. Not only is there a bathroom when you enter, but there is an entire accompanying lounge room to the right of it. The lounge room has bright pink walls with black seats. Mirrors with individual side tables and lights line against the wall. The actual bathroom has dim lighting with burning incense candles. However, this is only speaking for the women’s restrooms. If you’re a guy, you’ll have to check the bathroom out and let me know if it matches up to the intensity of the women’s bath-and-lounge area.

What many don’t know about Roseland is that the venue was originally an ice skating rink. It was bought in 1956 and converted into a roller skating rink. When it was first opened as the Roseland Ballroom, the owner banned rock and roll and disco, trying to keep ballroom style dancing alive in the venue. In the 1980’s, the building was sold again and “disco nights” made the ballroom popular, but also gave it a bad reputation. After a teenager was shot and killed on the dance floor and suspects of a murder were found at the venue, the “disco nights” were discontinued and the ballroom began hosting more shows, eventually leading to the successful venue we know today.

The Roseland Ballroom has held many concerts, with some of the more recent including the 2009 MTVU Woodie Awards (11/18), The Mars Volta (10/8), Yo La Tengo (9/25), The Used (10/27), and AFI (11/13). The venue hosts not only music shows, but also sit-down dinners, theater shows, and dance parties. Other performances the ballroom has had recently are Disney’s Princess & The Frog Experience and the Thurgood Marshall College Fund Fashion Show (11/25-12/13). So, next time you are in New York City, whether with your friends, parents, or baby cousin, make sure to check out the Roseland Ballroom, as it is sure to have something playing for you.