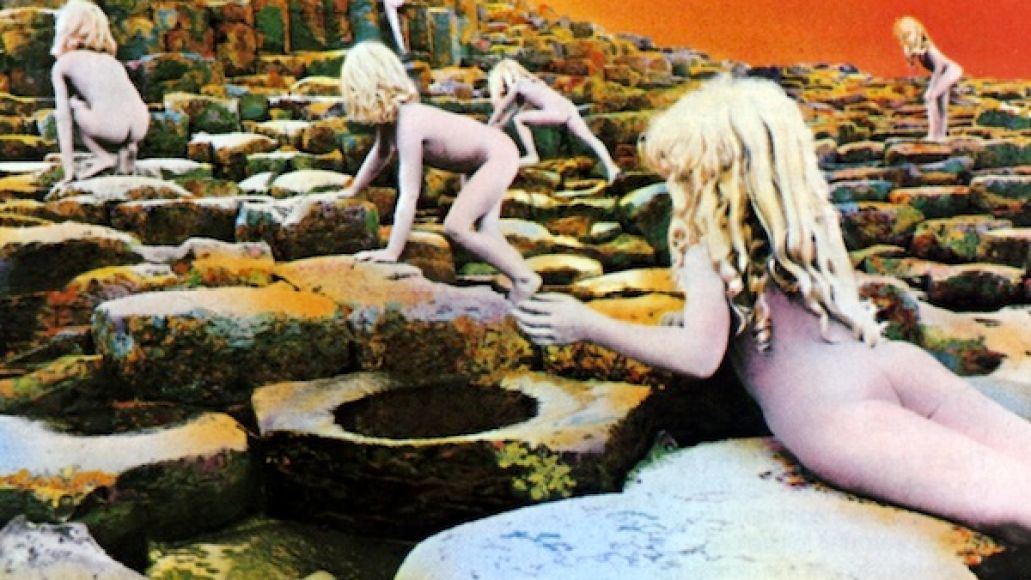 Led Zeppelin’s fifth studio album, Houses of the Holy, did not really require dusting off. It’s been on steady rotation since hearing it in its entirety my sophomore year of high school. I grew up on a decent dose of Zeppelin (my Dad had a cassette tape of Led Zeppelin II), but by the time high school came around, I dove in to their back catalogue.

To this day, I still feel their top three records start-to-finish consist of Led Zeppelin II, Led Zeppelin IV, and Houses of the Holy. The other numbered albums have their great number of supporters, and this isn’t a knock on the classic-filled Physical Graffiti. It’s merely a statement on a great band that made a lot of great music for about a decade. They may have teetered off a bit at the end, and probably would have broken up even if John Bonham had not passed away.

However, their legacy remains intact: Led Zeppelin is one of the greatest bands of all time, and Houses of the Holy is one of their great albums. So grab your headphones or open up iTunes, and let’s take a stroll down memory lane. First up: “The Song Remains the Same”…

…this hasn’t lost any of its punch over the past 35-plus years. Guitar legend Jimmy Page’s quick riff is punctured by the thunder of the Zeppelin rhythm section, consisting of bassist (and now Them Crooked Vultures member) John Paul Jones and drummer Bonham, leading into a great minute-long intro. The music slows down for vocalist Robert Plant, reminiscing about a “crazy dream” about “anything I wanted to know/any place I needed to go.” Before we know it, the song is off to the races again as Page delivers Great Solo #1,031. “The Song Remains the Same” remains epic, even though it clocks in at a little over five minutes.

“The Rain” may be Zeppelin’s most gorgeous song. Page alternates effortlessly between acoustic guitar and electric, with his acoustic playing reaching perfection at 1:26. These notes are played throughout the song, only elevated by Jones’ underrated keyboarding. Plant sings about the varying seasons of his emotive state, which culminates after Bonham makes his presence fully known:

“Over the Hills and Far Away” is a song introduced to this writer via the genius of Mike Judge. An old promo video of the song played on an episode of Beavis and Butthead. The duo weren’t too sure about the song in the beginning, until the electric guitar kicked in. Headbanging and devil horns commenced, but for me, I was hooked from the onset. Page’s acoustic guitar at the opening and closing of “Over the Hills” is something to experience. Okay, the middle part rules, as well.

Stone Temple Pilots obviously like “Dancing Days”. Not only did they cover it on a tribute album, but the band’s own “Trippin’ on a Hole in a Paper Heart” takes the guitar nearly note-for-note in the chorus. That mystical-twang Page brings as themusic’s driving force is irresistible. Add that to the “flower power” lyrics, and “Dancing Days” certainly makes for a trippy experience. The fun times continue with the reggae-influenced “D’yer Mak’er.” With fantastic drums courtesy of Bonzo, this is a bouncy song if there ever was one. Plant cries out, “You don’t have to go,” but does he mean it? It’s left to the listener to decide.

John Paul Jones is all over “No Quarter”. When I think of John Paul Jones in general, this is the song that comes to mind. He presides over the music for the most part with his keyboards and bass, but we can’t forget about the distortion from Page’s guitar and Plant’s altered vocals:

Close the doors, put out the light
You know they won’t be home tonight
The snow falls hard and don’t you know
The winds of Thor are blowing cold
They’re wearing steel that’s bright and true
They carry news that must get through

The ominous tone that Jones sets in “No Quarter” makes way for a song that can be heard as a polar opposite. Bonzo counts the band into the final song on Houses of the Holy, “The Ocean”. Page’s guitar riff (great solo #1,039) and the Zeppelin rhythm section pound march their way into the song’s finale, which plays out as the classic-rock equivalent of New Year’s Eve: streamers falling, confetti in the air, and couples embracing. “Oh, it’s so good” indeed, Mr. Plant.

And so ends Houses of the Holy. Only eight tracks long, but plenty long enough. Each track stands apart from the others, and serves as an example of a band at the height of its talents. All these years later, it still holds up, and, seriously…

Dusting Em Off: Led Zeppelin  Houses of the Holy