The story of Sasquatch! Music Festival is probably the most unique out of all the major festivals out there. You have to remember that back in 2002, when Sasquatch had its first year, the times were brutal for the almost non-existent festival scene. Perry Ferrell was calling it quits with Lollapalooza, and Bonnaroo was a twinkle in every hippie’s eye, leaving only a fledgling Coachella for the fans of the emerging independent and alternative scenes to get their live music fix. That is, however, until Adam Zacks stepped in, and showed us his idea of what a festival should be.

The story plays out more like the rise of an indie band than a music event, with word spreading like wildfire thanks to simple grass-roots publicity and word of mouth, but I can’t spoil the whole thing here, the rest will have to follow below. The point is though, there has been nothing like Sasquatch in the world of music festivals, and no matter how many seem to pop up, none could ever compare to what Zacks’ offers. From once-in-a-lifetime line-ups to the majestic views offered by the country’s premier outdoor music venue, does it really get any better?

Now just a little over a month away from what’s set to be Sasquatch’s biggest year, I got the chance to ask the man behind the monster about how it all happened, where he see’s it heading, and how he feels about “love” on the hill side.

So what’s the story behind Sasquatch, how did it start?

We started the festival in 2002. This is our ninth year. It began as a one day festival and was created in recognition that there was an untapped market for the festival experience since a many of the prominent touring festivals like Lollapalooza had stopped. At that point, Coachella was really the only festival to adopt the model that was already so successful in Europe.

The festival’s first year was right when many others at that time were calling it quits. What made you think Sasquatch would survive?

I didn’t! The first year actually sold out pretty fast, so I knew we were on to something and since then it’s been a process of trusting our instincts and growing it slow and steady. My gut instinct was that for a festival to have longevity it would have to reflect the culture of the region and earn credibility by being really attentive to the fans and responsible in our business practices.

When you started, you were catering to a niche that was pretty small back then. Do you feel it was more difficult to put on an indie-centric festival than say a jam or mainstream based festival? Did it make getting off the ground a little rough?

We were fortunate to start off with a strong footing and sell out in the first year. There was a critical shift in the early 2000’s in the way that music was discovered and the speed at which word-of-mouth could elevate a band. The word of mouth method of artist promotion was formerly dominated by jam bands fueled by the long history of tape trading amongst obsessive deadheads and the like. The Internet opened things up to other genres, especially with tech savvy college students and people thirsty for a steady stream of fresh new music. The growth of Sasquatch! has been parallel to this rise in online music discovery and that’s the audience we cater to.

At what point did you realize that Sasquatch was going to be big?

I think it surprised a lot of people that we sold out that first year, myself included. Big is a relative term and really not the only way in which I determine the success of the event. There are bigger festivals (much bigger), many of them great, I just try not to get distracted by trying to be “big”, but rather relevant and respected. Coachella and Bonnaroo are fantastic, but they’re like Star Wars-huge and awesome, and I’m just trying to make Annie Hall. 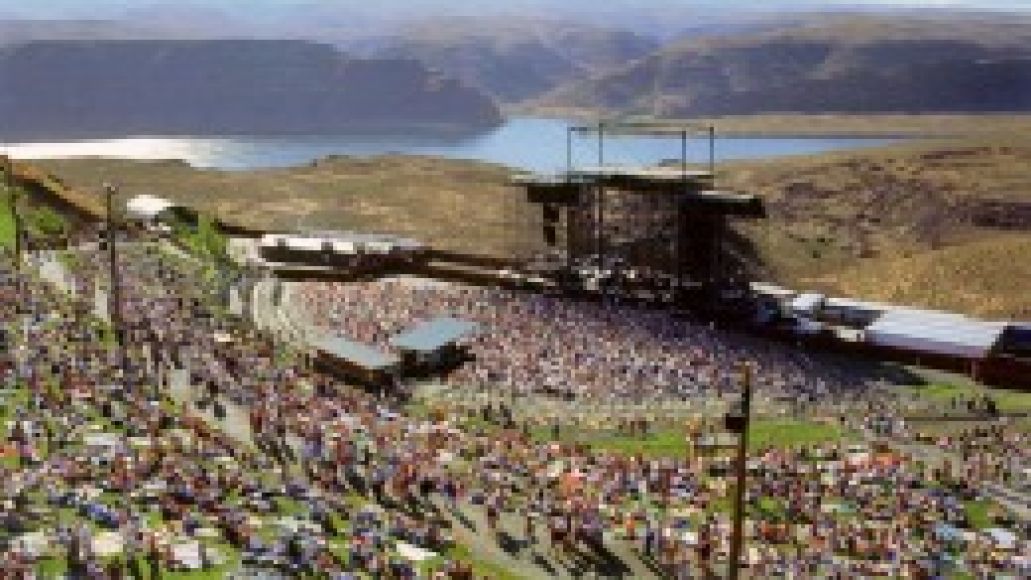 Your festival is really unique in that it’s the only major festival to be at a pavilion style venue, not just a farm or city park. What kind of challenges have you faced because of that?

It’s a big benefit to have a turn-key venue because you don’t have to build everything from the ground up and there are existing traffic plans and licenses in effect. The Gorge is very unique being a wide open venue with no ugly metal roof or pavilion, so it’s pretty ideal for a festival. The downsides are that the growth potential is limited and there are some institutional practices in place that we might do differently otherwise. I’m talking about things like signage and concessions, the types of foods available and pricing, etc. that are outside of the festival’s control.

Specifically, why did you choose The Gorge as the setting for the festival?

The natural beauty of the Gorge is undeniable and transports even the most tightly wound cynic to a different state of mind.

Do you think the location gives Sasquatch an advantage over other festivals?

Yes, it’s simply not a setting that can be easily reproduced short of building a stage at the edge of the Grand Canyon.

Weather has caused more than its share of issues in the past. Logistically, how do you go about combating the notorious Washington weather, mainly the wind that has been known to cause sound issues?

Wind is probably the biggest issue. There is a brand new main stage this year, which is much more enclosed and will keep the wind from gusting through the microphones. We did have a freak 30-minute hailstorm of biblical proportions one year. That was indescribable but ended up being a huge bonding event, like the rain at Woodstock, when it easily could have gone another way.  That experience helped crystallize in my mind one of the reasons why the festival was succeeding: the communal experience.

Now, when it comes to the acts that play, what’s the band booking process like?

In some ways it gets easier to book the festival as it becomes more widely known, but there is always heavy competition from all directions keeping it challenging.

Do you feel a pressure to deliver being that Sasquatch is now a major festival for the Northwest?

Yes, I feel indebted to the music fans who have supported the festival not to let them down or betray their trust. At the same time it’s really important to keep the festival fresh and daring, which means trying new things that might not necessarily resonate with everyone.

Aside from the headliners, how do you go about picking the rest of the line-up?

Just by being an obsessive music fan all year round.

Do you give any focus to the regional music scenes for the smaller bands?

It’s been a priority from the beginning to shine a light on the NW music scene and help elevate up and coming bands.

What prompted you to add a comedy line-up and an MC to the festival?

I’m just a big comedy fan and felt like there was a natural relationship between comedy and music. Most of the comics we book are big music fans so they’re psyched to be there. There’s also something great about being able to take a break from the music and sit beneath a cool tent for 45 minutes and have a laugh.

This year’s line-up is probably the boldest the festival has seen hitting the head on the nail one could say since three day passes have now sold out, how do you feel about it?

Is it getting harder to stay competitive with so many festival choices for the consumer out there now, not to mention the state of the economy?

Those are big challenges for sure, but there are never any guarantees in life, so you just have to do your very best and not hold yourself back by worrying about forces beyond your control.

Will there be any big changes to this year? Any surprises?

There are some good changes in store, most designed to improve the festivalgoers ease of experience and some just to mix things up. There is a solar powered stage this year and hopefully a few surprise guests.

Where do you see the festival heading in the next few years?

2011 is the festival’s 10 year anniversary. We’ve been stockpiling a list of cool ideas with the intent of unleashing them next year.

Who are you most excited for this year?

I’m honestly excited about all of the bands, but its especially cool to watch people discover a newer band like Local Natives or The Lonely Forest.

The Constantines in the hailstorm… The Flaming Lips playing “The Song Remains the Same” with dancing nudes, teletubbies, and aliens… The organic flash mob dance party last year during Santigold… public sexy time on the cliff during The Decemberists… Coldplay… Wilco… Kanye… Bjork… The Arcade Fire… The Cure… R.E.M….  Sufjan Stevens with 300 inflatable supermen…

If money were no object, who would be your dream band to play the festival?

Great question, I’m honestly not sure.

Finally, any comments on the “free love” that occurred during The Decemberists set last year?

It was just really funny and kind of refreshing. We’ve reverted to being a fairly uptight society in many ways, so when a couple brave souls just go for it, in public, on a cliff, during The Decemberists no less, well… Bravo.