During the encore of Saturday night’s sold out show at the El Rey Theatre in West L.A., Liars took the stage as a threesome, the core-three who met more than 10 years ago in this city while students. Though the previous set had been played as a five-person band (rounded out by two members of opening act Fol Chen), singer Angus Andrew announced that he was going to try a couple with just the three of them, the other two being drummer Julian Gross and guitarist/keyboardist Aaron Hemphill. They then made their way through blistering one-two punch of “Be Quiet Mr. Heart Attack!” and “Broken Witch”, highlighting just how far they have come as a band. From their L.A. meeting, they left Gross and became involved in the New York dance-punk scene of the early 2000’s, reunited with Gross to record an album about witches in rural New Jersey that some people hate more than cancer, made a percussion masterpiece in Germany, and have come home to record two consecutive accomplished albums that seem to go underappreciated no matter how much rock critics praise them. As intense, at times emotional, and even terrifying as Liars can be, it is difficult to pinpoint who their audience is, besides music critics and maybe some heshers. In L.A., it was extremely well-dressed men who looked to be drug enthusiasts, but one thing they were not on Saturday was unappreciative.

Liars has a wealth of material to draw from, but stuck with material from the period the core-trio have been playing together, thus excluding their first full-length and other music from their New York period. Splitting the night evenly with eight old and eight new songs, you would have a hard time judging from fan-reaction which ones were which. This is probably due to the fact that their newest release, Sisterworld, has been available for nearly three months making the night less of a promotional tour then most bands give their new records. For me, Sisterworld was a record that completely impressed me on the first listen, but that I’ve had a hard time finding proper situations to revisit. But the fans at the El Rey did not seem to have that problem, singing along to Angus’ chants and even joining in (and not by request) to the implied call and response of “Scarecrows On A Killer Slant”. Add to the welcoming crowds a room that could accommodate the band’s complex textures and contain it’s unending energy, and you had one of the better sows I’ve seen this year. 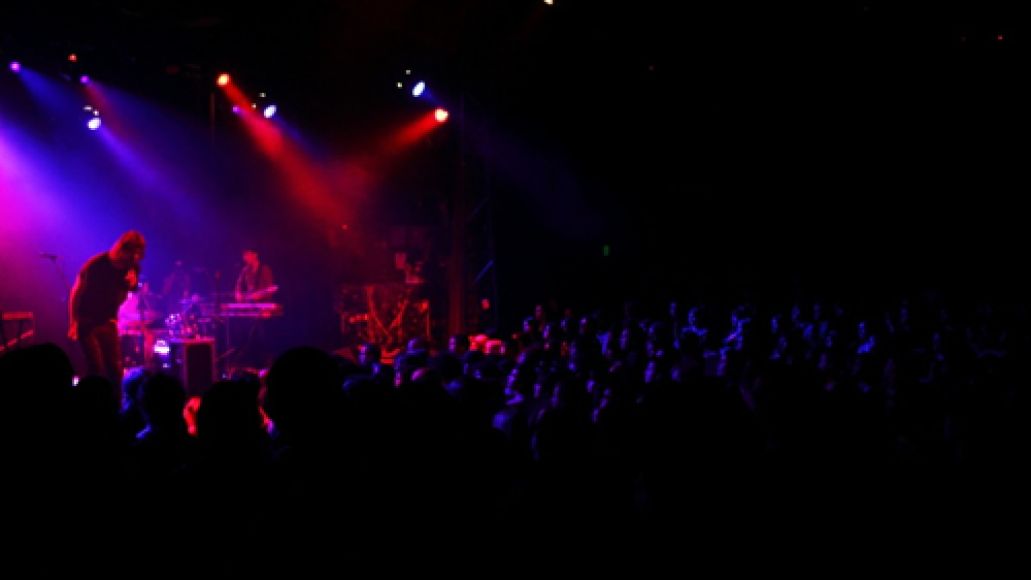 It is important to note that if you’re planning to see Liars in concert, the environment is a major factor of how much you will enjoy it. My first two times seeing the band involved either Angus Andrew’s back injury or hundred degree Coachella heat, neither of which were the best time or place to enjoy the complex band. At the El Rey, from the opening duel percussion of “A Visit From Drum” (the song appears as “There Is Always Room On My Broom” on the original setlist, but the moody, mellower track was a good switch) to the complex rhythms of “We Fenced Other Houses With The Bones Of Our Own”, the texture and precision of Gross’ drum beats could be felt as well as seen. But for all their rich, layered songs, the band really rules when they go nuts and rock. “Clear Island” got the biggest crowd reaction of the night, but Sisterworld tracks like “Proud Evolution” and “The Overacheivers” (how could you not love the L.A. chant?) rang equally enjoyable. It was kind of show that made fans of people who were unfamiliar and if you did know the band, it made you like a band more. All in 70 minutes. When a band plays a show, is there more that you can hope for?

Opener Fol Chen sure looked happy to be involved in this event and they made the most of their half-hour opening slot. The band didn’t seem quite as apocalyptic as the press release would have you believe, but they combined catchy melodies and some pretty rad trumpet solos to provide appropriate accompaniment for Liars. It was music that made you think “this is the type of music I expected to be hearing in 2010,” remaining futuristic and still organic at the same time. Plus, the singer nailed a falsetto finale in one-song that got the crowd really going. The L.A. locals did not seem to have a home-field advantage early, but by the time two Fol Chens became Liars, the crowd could at least recognize them and have nothing but positive things to say about this other band they’re in. And keep in mind, last time Liars came to the El Rey, another little known L.A. band was opening for them. They are called No Age and things seem to be going okay for them. Fol Chen could easily see the same amount of success.

Liars setlist
A Visit From Drum
No Barrier Fun
Clear Island
I Can Still See The Outside World
We Fenced Other Houses With The Bones Of Our Own
Scissor
The Overacheivers
The Other Side of Mt. Heart Attack
Scarecrows On A Killer Slant
Sailing Back To Byzantium
Here Comes All The People
Plaster Casts Everything
Goodnight Everything
Proud Evolution
Be Quiet Mr. Heart Attack!
Broken Witch
——