Upon its fall 2003 release, Lost in Translation received vast critical acclaim for Bill Murray’s Oscar-nominated portrayal of an actor enduring a midlife crisis and the breakthrough star-making performance of Scarlett Johansson as a young woman already dissatisfied with life and her recent marriage. Sofia Coppola also received an Academy Award nomination for Best Director and won for Best Original Screenplay. In Lost in Translation, Murray’s Bob and Johansson’s Charlotte are two strangers who connect in Tokyo thanks to a shared disillusionment over their respective lives and humored bewilderment with the unfamiliar culture and language. In addition to being an excellent film, Lost in Translation is renowned for its soundtrack, and the music serves as the third star of the picture.

Lost in Translation opens to “Girls” by Death in Vegas as Bob arrives in Tokyo via taxi. With an ethereal loveliness reminiscent of My Bloody Valentine, “Girls” sets the tone for the rest of the film. The atmospherics of shoegaze dream pop and the feelings of longing they evoke, coupled with the beauty of sadness, reflect the emotions and moods throughout the film and these emotions are preserved in the soundtrack. “Sometimes” by legendary shoegazers My Bloody Valentine is featured prominently in the film as Charlotte and Bob cross Tokyo’s Rainbow Bridge after a long night of partying and karaoke, and the song’s dreamy textures flawlessly capture the reflective nostalgia of the moment.

Kevin Shields, elusive frontman of My Bloody Valentine, contributes the most intriguing original compositions to Lost in Translation. Anyone expecting something that resembles a followup to Loveless will be disappointed, and Shields’ vocals only surface on “City Girl”, which could actually pass for a pre-Loveless obscurity. The other three Shields originals are atmospheric accompaniments to specific film sequences. “Are You Awake?” is the most captivating of the bunch, and a short one that leaves the listener craving more, especially since it gives hope that Shields will further explore electronic music someday, or release any previous attempts that might exist in the vault of unheard post-Loveless demos. “Awake” shares its title with a note that Charlotte receives from Bob under her door and is as emotionally comforting as a friend correctly surmising your own restless night. “Ikebana” is another short electronic number and “Goodbye” is more akin to Brian Eno than My Bloody Valentine, but affecting nonetheless. 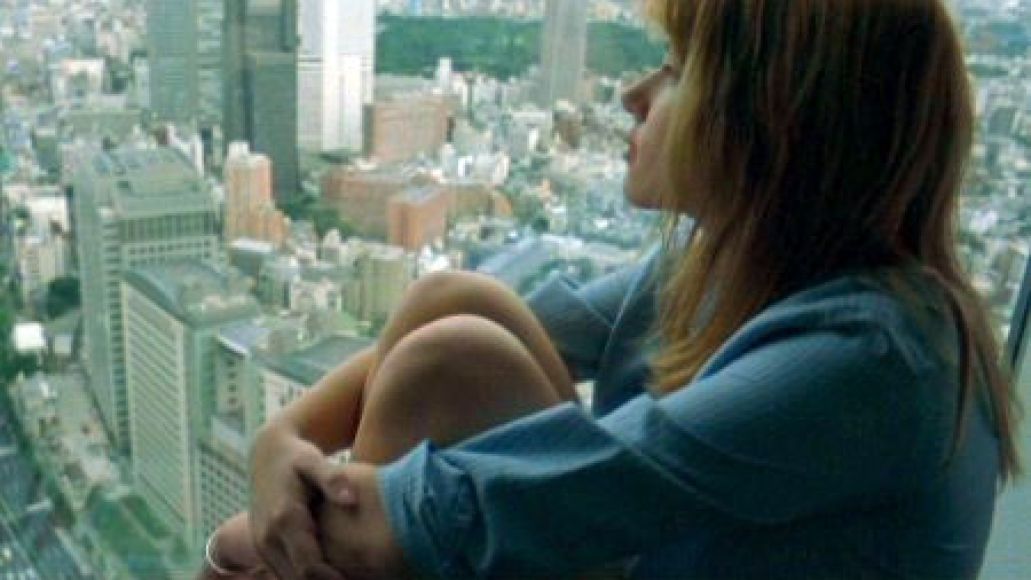 Having previously scored The Virgin Suicides, the French electronic space pop duo Air once again collaborate with Coppola for Lost in Translation. Their contribution “Alone in Kyoto”, which would later appear in their 2004 album Talkie Walkie, is a soothing, Asian-influenced number that fits the scene of Charlotte’s visit to Kyoto so perfectly that visualizing the beauty of Nanzen-ji is unavoidable. “Too Young” by French indie rockers Phoenix is  an awkward fit on the Translation soundtrack, as it is an obvious contrast to the dreamy, largely instrumental tracks on the album. Although out of place, “Too Young” is a welcome cheerful break.

Several songs featured in the film do not appear on the soundtrack such as “The State We’re In” by The Chemical Brothers, Patti Smith’s cover of “When Doves Cry”, and most notably Peaches’ “Fuck The Pain Away”.  While “Fuck the Pain Away” is Peaches at her best, it is understandably not on the soundtrack as its inclusion would have interrupted the flow of the album even more severely than “Too Young” — despite being highly appropriate for the strip club scene.

Because Lost in Translation is such an emotional film with a likewise soundtrack, a powerful goodbye is mandatory, and luckily “Just Like Honey”, a classic from shoegaze pioneers The Jesus and Mary Chain, is more than up to the task. “Honey” actually provides the most potent musical moment and it’s impossible to imagine the film ending any other way. Now that it has been over six and a half years since the release of Lost in Translation, one has to wonder how much of a role the film and its soundtrack had in the rebirth of shoegaze in the mid ’00s. After all, My Bloody Valentine eventually reformed, as did The Jesus and Mary Chain, with the latter performing with none other than Scarlett Johansson at their Coachella reunion.

With an exquisite collection of music the soundtrack to Lost in Translation proves once again that the substantial talents of Coppola extend beyond screenwriting and the director’s chair. Specifically, what she has is an extraordinary ear for music and how it can work together with film. For Sofia Coppola pictures, the merging of film and music proves more powerful and effective than either is on its own.