As covered previously, it is well known how Insane Clown Posse loves to throw down an intense party. Faygo showers, tit flashes, costumes, confetti, and mayhem galore — all part of the standard fare, really. Naturally, when the Happy Daze Tour 2010 had ICP topping the bill, with the horror-core duo making another stop in Charlotte, NC, so soon after the last, we had to see how they’d manage an outdoor venue with California herb-supporters Kottonmouth Kings and hip-hop novelty Coolio on board. To make things clear, Kittie was also on the bill as one of two opening acts, but between navigating downtown Charlotte and dealing with (yet another) incompetent staff, sadly we missed that performance. Props to Uptown Music Amphitheater for giving the press such a warm welcome in 60-degree winds and a downpour of rain, it was heartily appreciated.

To the line-up — I would say that Coolio being on the bill was a die-hard shock, but given the Juggalo Gathering’s past booking of Vanilla Ice and so on, I’m not terribly surprised. Unfortunately, age and drug use have not been kind to the ill-fated-but-otherwise-positive rapper. Gathered with his son and nephew on stage (yes, his son is a grown adult and also a rapper … a much better one, even), Coolio opened with his most recent song, “From The Bottom 2 The Top”, while hundreds of people stood in the drenching rain to play “spot the downward spiral/upward hairline.”

Coolio’s worst song was the best performance he gave all evening, and this is a shame with a streak of bad luck; couple that with technical difficulties (staged or not) and having the fewest lyrical deliveries throughout his whole collaborative set beyond “From The Bottom 2 The Top” and “Gangster’s Paradise”, the 46-year-old former hip-hop star has become a shell of himself. He should not be touring right now, period — he is embarrassing the remaining fans of his work, old and new, but more importantly, he is embarrassing his own being. Better to burn out, specifically if you’re burning one in the process that you shouldn’t be (not necessarily the ganj). 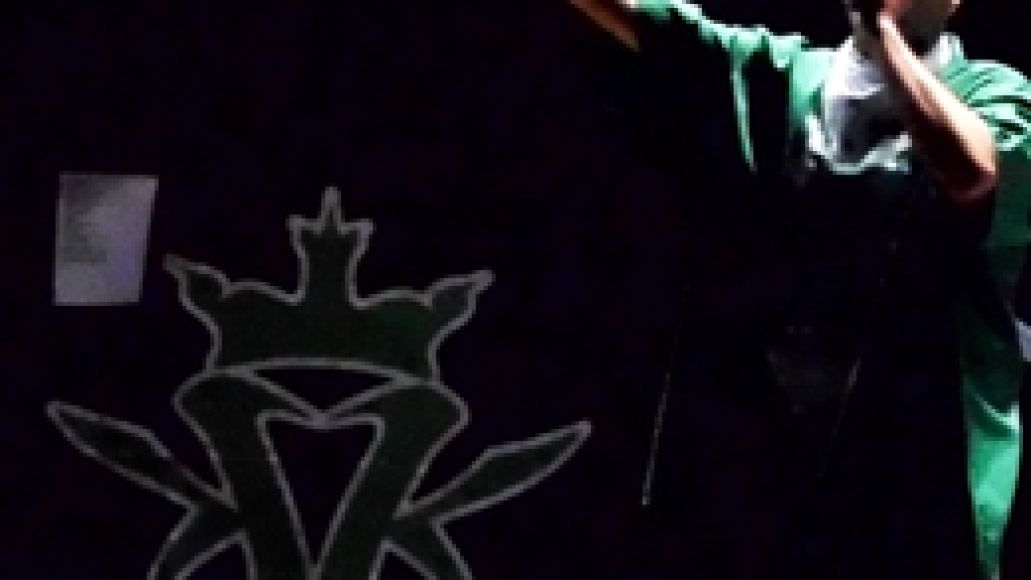 By the time our weather began to clear, this tiny outdoor setting (complete with no overhang and no press pit) began preparations for Kottonmouth Kings to perform. KK is one of those acts, much like ICP, who do not need nor wish to be taken all that seriously by mainstream media outlets. The lyrics can be redundant or dated at times, and I wholeheartedly agree that their newest album is merely the same ol’ same, but to be fair — that is KK and always has been, and more often than not the members’ respective song deliveries tend to outshine the content with a modicum of worthy skill, even if the subject matter never changes. Meanwhile, the crowd was awash in the aroma of fresh greens (inconspicuously palmed in unison when needed, I’m sure) and Daddy X’s on-stage banter about legalization and finding jobs for the American public. At least he’s adamant, no?

The set list was peppered with tracks from all over the band’s discography, while also introducing the newest steady member, The Dirtball, who was a highlight of the evening’s rap personae. “Full Throttle” and “Where’s the Weed At?” were expected inclusions and brought everything from mosh pits to singalongs, while the newest tracks from Long Live the Kings such as “Stomp” and “Rampage” were proof that even the weakest of KK can still bring a house down if the fans are loyal enough. D-Loc and Dirtball seemed to be the ones most capable on their toes, whereas Daddy X emerged looking like Koopa from the Super Mario Bros. live-action film and came off nearly as ridiculous, despite his attempts to sincerely engage the audience. In retrospect, KK topped Coolio easily, but is that really saying much?

As night swelled and the rain restarted in a mild misting, black curtains and loudspeakers repeatedly cock-teased the Juggalos and Juggalettes before our ringmaster rang in the festivities to announce, verbatim, “The most hated band in the world” — Insane Clown Posse. 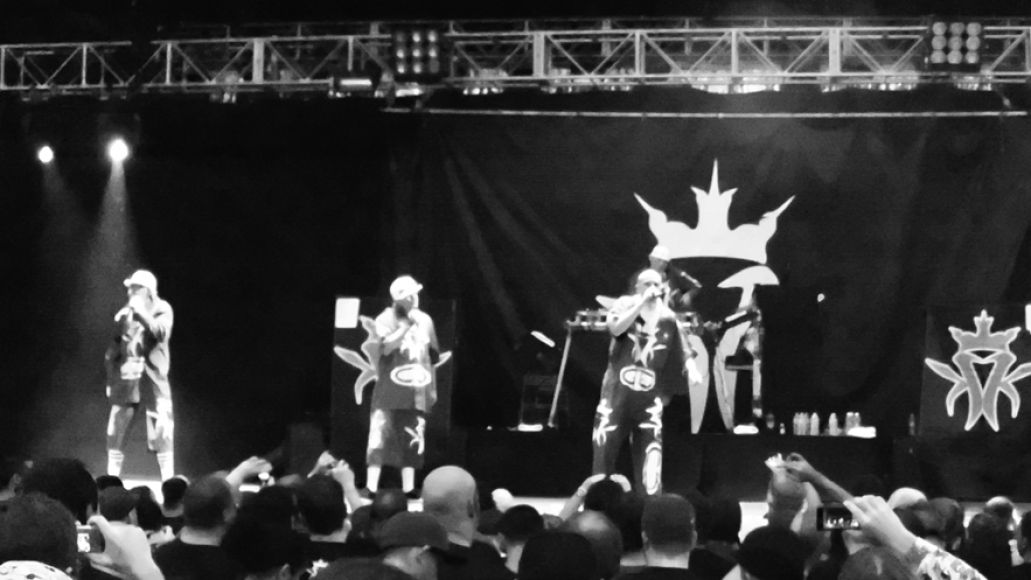 ICP entered with the usual bombast and carnival antics, opening on The Great Milenko favorite “Hokus Pokus” for a proper trade-off introduction. To make light of the positives, this set was more about fan service and less about promoting the newest record, Bang! Pow! Boom!, a noticeable difference from the last tour. 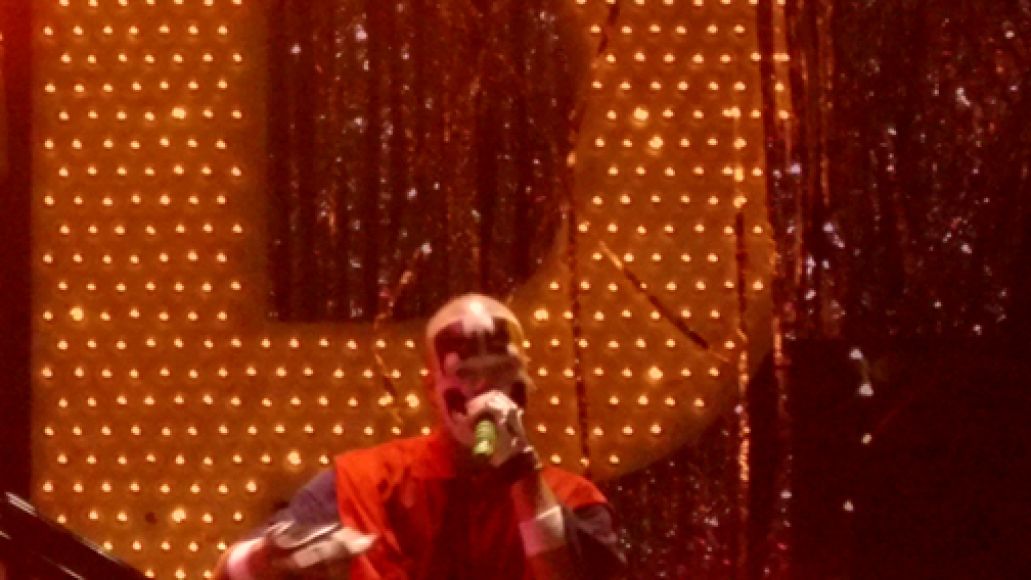 Gone were “To Catch a Predator” and “Chop Chop Slide”, instead replaced with The Amazing Jeckel Brothers classics “Assassins”, “Fuck the World”, and my personal favorite, “Terrible” — a song that, while spearheaded by two guys whom we can all agree are not very talented rappers, holds merit for pointing out the misguidance in today’s media and the ignorance of bigotry. There were performances of Bang! Pow! Boom! that everyone did expect and did receive, such as the boastful “In Yo Face”, the finale charge of its titular track, and the newest mock-ful Internet meme “Miracles”, but if there was a complete absence of B!P!B!, people might talk. The party was glazed with some danceable “Tiltawhirl” and “Homies” before becoming a full-on fanatical raucous.

Once again, Insane Clown Posse managed to steal the show away from everyone on board, and while not a big feat as relative to Coolio, Kottonmouth Kings held their own that night, and ICP still overthrew the spectators with typical anarchical celebrations the likes of which no one I’ve seen has yet to top. Let me make this as plain as I can without drowning myself in unneeded superlatives: Insane Clown Posse is not a hearty, intellectual, or quasi-political rap game statement; Shaggy and J are not icons of a burgeoning American music scene, they are just themselves — on tainted Halloween candy perhaps, but that’s open to opinion.

Casual fans can shuffle their iPods and go from Animal Collective to “I Want My Shit”, because ICP is something else — nothing like the roster of Psychopathic Records exists elsewhere; dedicated fans can experience a family aesthetic at these concerts much like a Dylan fan gets intimacy from his acoustic sets, because it is a sense of belonging to be with those who are frowned upon in society and feel welcomed. ICP has repeatedly lauded the deeper meaning in what it represents beyond carnage and necrophiliac-based rhymes, and though we can chalk it off as one publicity stunt after another, people truly believe in the perverse joy this duo brings to the table.

In the end, as pissed off as some of us may be at the world (and its inclement weather, especially during this event), as much as those frustrations can lead us to venting our anger by constructive means like moshing or reciting “Fuck the World” — we still know how to party, and we still know that life’s too short to be taken seriously. Have a Faygo, America, and a happy daze to you all.

Oh, and stay the hell out of Charlotte venues, that city’s staff is about as helpful as an ax to the cranium. 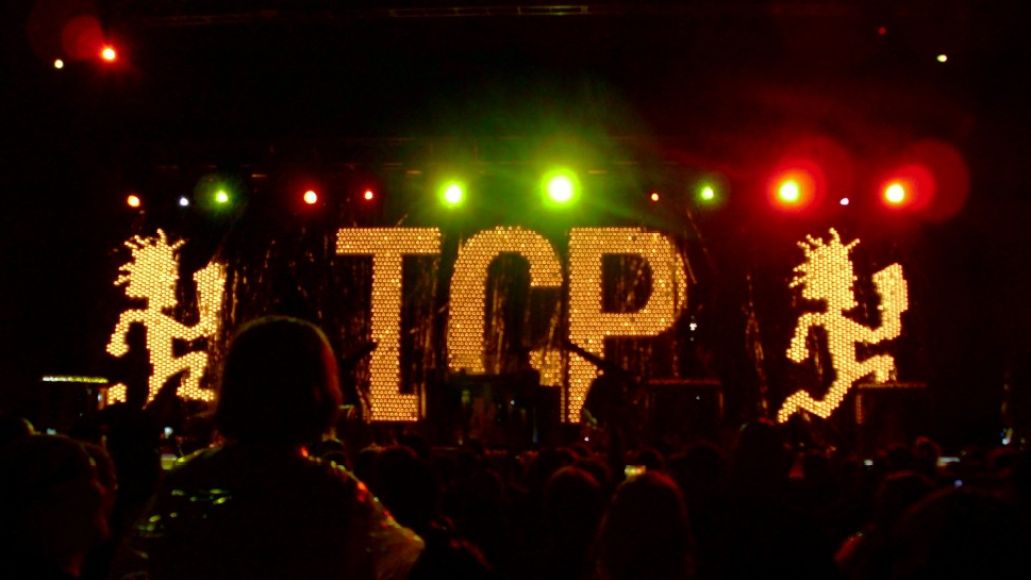