Chicago’s Subterranean is the ideal venue for an intimate, darkly expressive rock show, and Friday night’s bill was a perfect fit for the space. On its first tour in support of debut album Tonight is the Ghost, Hurricane Bells capped off an engaging night of local music with deep guitar and floating, sadly hopeful vocals.

Opener Verona Red warmed up the crowd with a surprisingly accessible brand of Chicago rock. You don’t expect a totally familiar vibe from a band you’ve never heard before, but there it was. With warm guitar, a well-pounded tambourine, and bongo drums laid over the full percussion, Verona Red played a set that I felt a high-school-music affection for. Lead singer Chris Balzer danced in a way that made his music seem as if it came up from the shoes of his soul. Anyone who hasn’t seen this local Chicago band is missing out; hopefully they’ll be hitting the festival circuit this summer.

Middle band King Sparrow are also Chicago natives and kept the garage rock feel of the evening going with a quality set. The band is composed of three guys who look endlessly approachable. They look like dudes I knew in high school, or maybe my little brother’s friends, who just happen to be on stage right now playing incredibly well coordinated rock music. Enough grit to sound genuine and enough orchestration to be clearly deliberate, King Sparrow mixes a DIY aesthetic with a powerful rock sound to create an authentic sound warm with power cords and distortion. At times, the musicians’ hands strummed and struck so quickly that they merged into a blur of flesh and instrument. King Sparrow seems to have a sizable local fan base, and when they finished their set, the crowd immediately began chanting for “one more song!”

Hurricane Bells took the stage around 11:30 (and on a side note, it’s always nice to see a venue stick to its posted schedule).  From the start, these guys were well-coordinated and clearly well-rehearsed. Creator Steve Schiltz performs the guitar, lead vocals, and soul of the band. Schiltz recorded Tonight is the Ghost all on his own, performing and mixing each note on every instrument himself to create a dark, moody-yet-hopeful rock album. For his first tour, however, he elected to bring a band with him, and his unnamed comrades were talented musicians as well. You can’t tell from listening that they are not the original recording band; Hurricane Bells’ live show is a faithful representation of their recorded personality.

If anything, the live set was enhanced incredibly by the addition of a female vocalist whom Schiltz identified as his “kid sister.” She added a lovely layer to tracks like opener “The Winters in New York” and “Darkness Is So Deep”, and totally stole the show on “This Year”. Her raw, ethereal voice floated high over the depths of Schiltz’s darker tones and the acoustic guitar, tugging the music with her into an entirely different sonic landscape. With her addition, the song was elevated from pretty great to totally amazing. 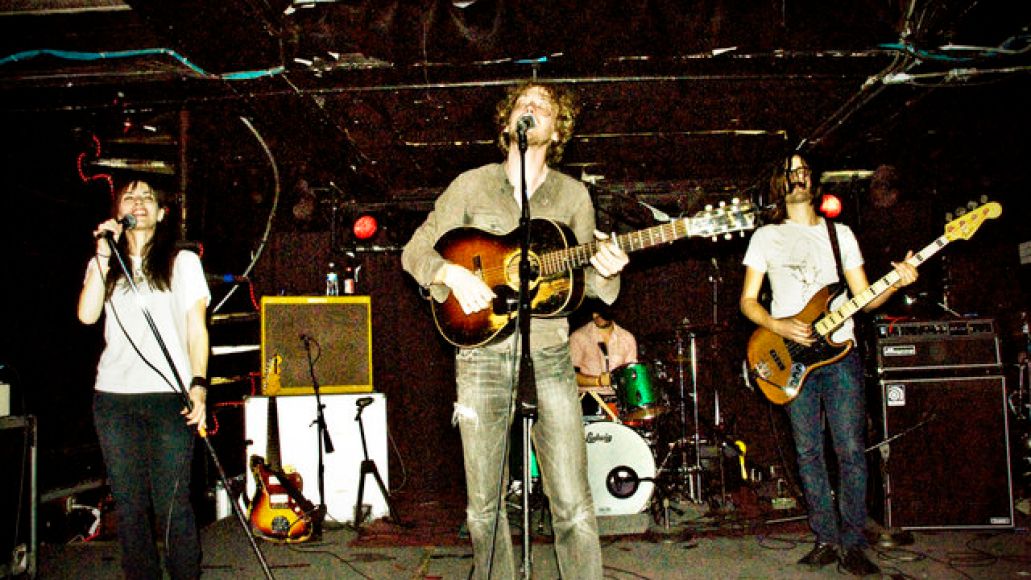 “Tonight I’m Going To Be Like A Shooting Star” floated hauntingly above the audience, culminating in a long, epic guitar solo that burned bright before dissolving into distortion and haze, and then clearing suddenly with only Schlitz’s vocals left to keep us going—powerful stuff. Another showstopper was a cover of The Shirelles’ “Will You Love Me Tomorrow”, in which kid sister joined Schiltz at the microphone for a spine-tingling vocal duet that played in high and lows, giving the song a whole new coat of paint. Save for the iconic lyrics, it was hardly recognizable as a cover; Hurricane Bells so owned the song that it sounded as if Schlitz composed it on his couch.

Hurricane Bells closed out their set with charmer “The Cold Has Killed Us”, the darkly optimistic meditation that contains the album’s titular lyric. Heavy on floaty “oooh”s and maraca beats, the song was epic and lingering in person, much more so than even on the album. Subterranean was hardly at capacity last night, but you couldn’t tell from listening to the applause of the crowd.