May is shaping up to be quite the busy month over in Minus the Bear’s neck of the woods. The Seattle-based indie-rockers are currently knee-deep into their Spring tour (with Everest). This past Sunday, May 2nd, the quintet played East Rutherford’s Bamboozle, and now, fresh off the release of Omni, the group’s fourth LP, Minus the Bear is ready to carry onward with another 22 scheduled tour stops (that’s capped off with sets at both Sasquatch! and Lollapalooza). You would think that with such ambitious plans and touring itineraries the five-piece might want to spend the eve of their album release relaxing with family and friends. If by relaxing you meant playing a roughly hour and a half secret set, and by family and friends you meant a hundred some-odd lucky fans, you would be right.

On May 3rd New York City’s Bowery Electric played host to a very special secret show for Minus the Bear in celebration of Omni. Within hours of BrooklynVegan’s announcement of the show tickets were sold out, leaving desperate fans scrambling to win tickets or try the secondhand market. While the venue’s quaint 108 person listed capacity left many out in the cold, those who did manage to score a ticket were given quite a treat.

To say the evening was an intimate affair would be an understatement. A small, standing room only floor, coupled with a stage height that was almost negligible and a lack of security or a true “barrier,” made for an experience not often found in many of the larger venues in New York City. At one point in the night, Jake Snider, the band’s lead singer and guitarist, went so far as to remark that he knew things were really tightly packed, but he still wanted to see people dancing. The capacity crowd was most happy to oblige: dancing, clapping, shouting and, of course, singing along to songs both old and new. 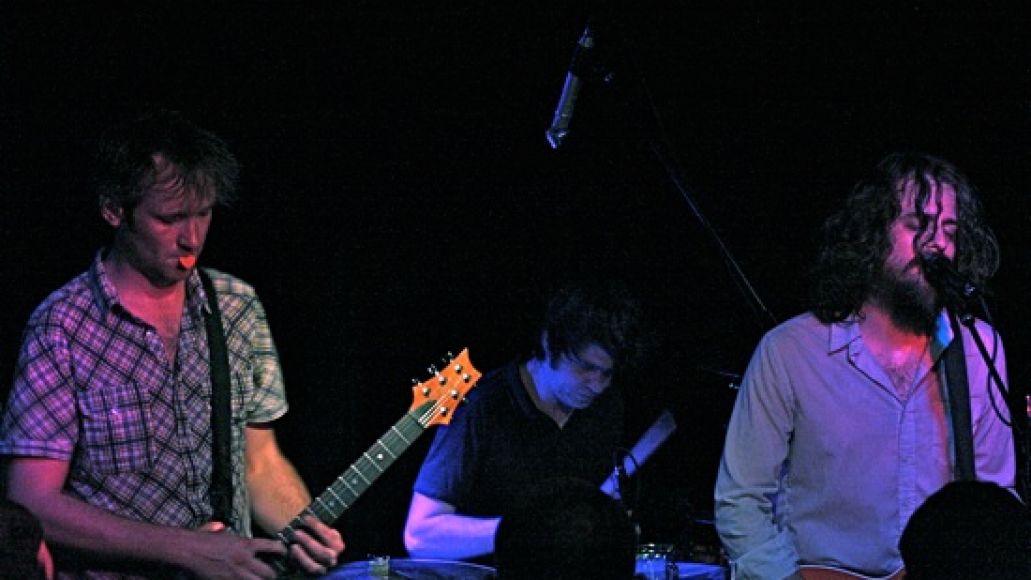 Minus the Bear kept up the intensity throughout the whole night, with Snider hardly wasting a moment between songs to share a short story or poignant anecdote (although he did spend a minute debating the merits of ordering a shot of goldschlÃ¤ger, which was quite humorous). The only other real breaks in the music came during the many times Snider had to switch between differently-tuned guitars for certain songs, and the front man even went so far as to apologize for how time consuming the whole process was.

Keeping in mind that this show was meant to celebrate the release of Omni, Minus the Bear did make sure to play a healthy mix of both older and newer material. While the crowd was energetic and enthusiastic throughout the whole set (and why wouldn’t they be?), it did seem apparent that some of Minus the Bear’s more classic material elicited the largest crowd response. As such, it seemed appropriate that Snider and Co. closed their main set with fan favorite “Pachuca Sunrise”, off 2005’s Menos el Oso, and elected to finish off their two song encore with the equally adored “Absinthe Party At The Fly Honey Warehouse”, off the group’s 2002 debut full-length Highly Refined Pirates.

By all accounts Minus the Bear’s secret show at Bowery Electric was a success. When BrooklynVegan announced the show the morning of, one anonymous commenter on his site asked “is this band really worth [sic] of ‘small secret show’ potential?” The answer in this case would be a resounding yes.

Minus the Bear surprises the Big Apple (5/3)