If you’ve ever wondered if you have a truer, more artistic calling than your regular 9-5, go see Sharon Jones perform, immediately. Onstage, the woman who used to be a corrections officer is the embodiment of pure joy: moving, swaying, wailing her gorgeous, caramel-smooth voice high above the reach of the trumpet. Here is someone who has truly found her calling—and to look at her, you can’t believe she hasn’t been famous all of her life. Jones was truly destined for the stage. But a proper diva needs a proper introduction, and on Friday night at The Vic Theatre in Chicago, she got one.

Opener The Heavy got things rolling right on time. A six piece from the UK, The Heavy got straight to the funk. “We thought we’d bring you some enlightenment,” lead singer Kelvin Swaby purred to the adoring crowd. With a toothsome bass groove a mile deep and a gritty bass vocal, The Heavy manages to strike a precarious position: funky, fearsome, authentic, and yet totally radio friendly. A tenor sax howled on the high notes, and Swaby started a call-and-response song with the audience. “I’m a big bad wolf,” he cried. “What you say?” the crowd threw back joyously. Swaby’s voice rose and fell, creating peaks and valleys in the meringue of the set, truly an example of how to use the voice as an instrument. He experimented with his part as much as any horn or guitar player on stage. The ripping horn intro on “How You Like Me Now?” was a crowd favorite, ending with Swaby yelling, “How you like me now, Chicago?” The answer, clearly, was very much indeed. 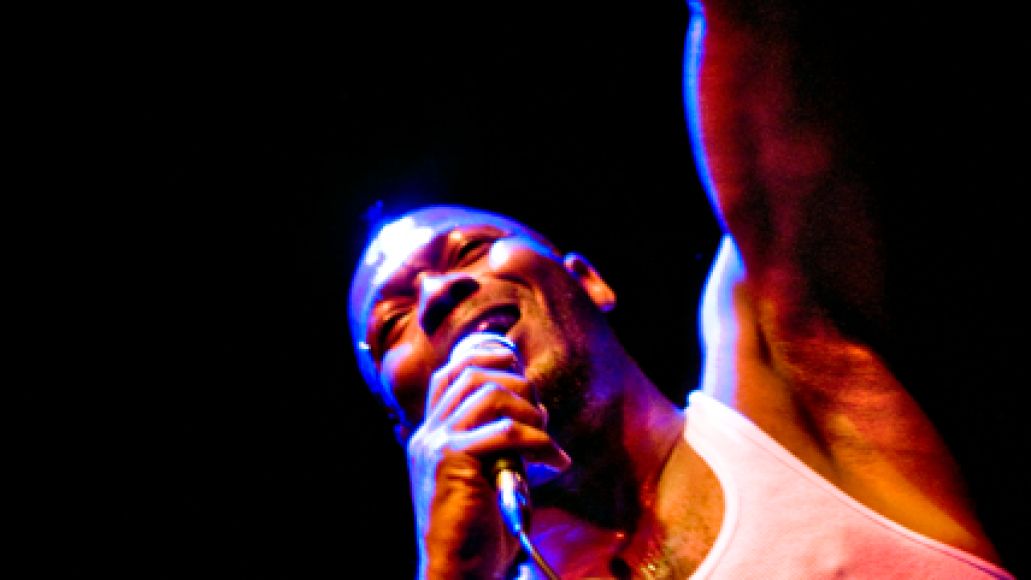 The room buzzed as the stage was changed; people were definitely excited now. When the lights came up on the Dap-Kings, women screamed. The eight Dap-Kings teased the crowd a bit further; as the band played, guitarist and emcee Binky Griptite alluded to Sharon Jones, but didn’t bring her out. The band’s bright fusion of trumpet and horns was a lovely cocktail of sound, but the buzz continued. Where was she? When would she come out? Finally, Griptite could hold back no longer: “Here she is, Ms. Sharon Jones!” And the crowd, literally, went wild.

Jones took the stage in a proper diva dress, a vision of pink sparkly sequins. Her silky, deep-throated voice blended with a screaming trumpet over a big band sound on the first song. The crowd was barely able to contain itself, and people screamed randomly during the beginning of her set. This was something of a shame, really, because Jones and company are so effortlessly classy. The band looks like they belong onstage at a speak-easy in the 1920s, not in front of a bunch of screaming college kids (which is not to say that this wasn’t a mixed crowd, because there were folks dancing in the aisles who were clearly older than my parents. Perhaps, not surprisingly, those audience members are less apt to scream like mental patients during a concert.) But gradually, people got away from the “O.M.G., it’s SHARON JONES” mindset and were pulled into the music, and the crowd’s responses became more appropriate to the show.

The Dap-Kings mixed slower songs with high-energy funk and still found time to support their favorite causes, as well. “Let’s keep thinking about New Orleans,” Jones pleaded before ripping into a thrilling, jazzed-up version of “When The Saints Go Marching In”. “Don’t you waste my time!” she wailed on another song, nearly screaming her lyrics in a pitch that matched the bright tinny sound of the trumpet’s higher reaches. The band swayed to a dance beat, the music itself taking two steps forward, two steps back, with the horn players leaning together in sync.

They played a cover of “This Land is Your Land”, and as Jones listed city names, she threw in a strategically placed “Chicago!” to raucous cheers from the crowd. Other favorites included “Mama Don’t Like My Man” and “Better Things”, from Sharon Jones and the Dap-Kings’ new album I Learned The Hard Way. “I gotta take these heels off,” Jones exclaimed, pausing. When the crowd cheered, she amended, “Just so I don’t hurt myself up here!” Truthfully, this was probably a good idea. Jones runs back and forth, dancing, swaying, throwing herself about the stage at times with such abandon that it’s a wonder she can keep her voice in control. And yet, she always does. Sharon Jones is having enough fun up there for every man, woman, and child in the audience, and that’s what makes her shows so enjoyable: Her spirit is contagious.

As the set began to wind down and the bari sax laid down a wicked solo, Jones thanked the audience for selling out the concert hall, and as her female back-up singers the Dapettes carried on the chorus, Jones slipped off-stage. Soon the Dap-Kings were laying down their horns and waving goodbye. The crowd wasn’t having it, though, and cheered and clapped for almost ten minutes. Griptite came back on to screams and practically made them beg for Jones, who reemerged triumphantly. After a long set, you’d think they’d be low on ideas, but you’d be wrong. 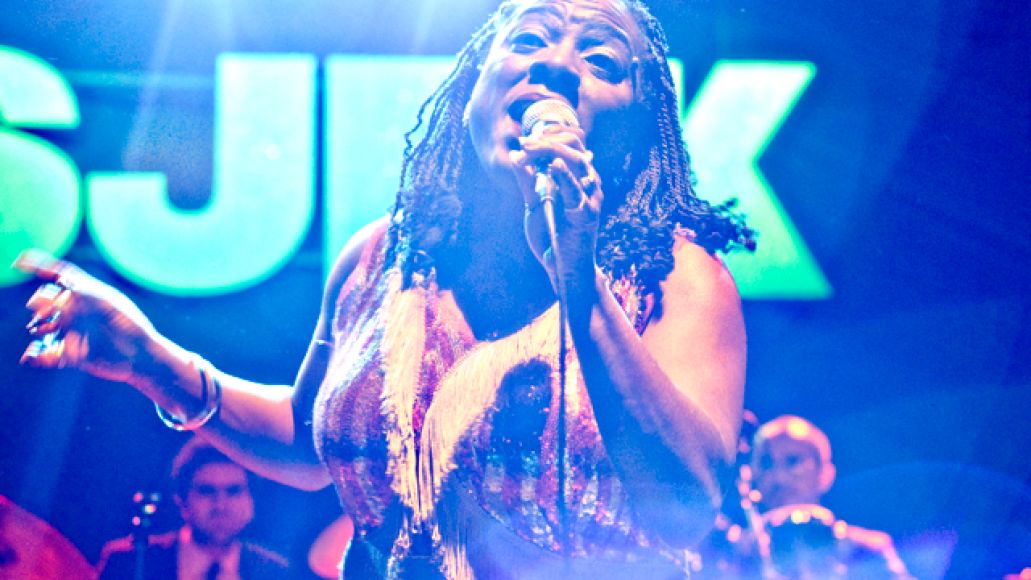 Another ripping bari sax solo opened the encore, and the band played a few more songs, including crowd favorite “The Game Gets Old”. On the last number, Jones asked women from the front of the audience up on stage. First a few friends, then a few more gals—it became clear that Jones had a plan. “Now ladies,” she began. “Ladies—ladies! If you don’t pay attention, I will send your ass back down there so fast!” she cried, to whoops from the crowd. As the band played “Keep On Looking”, Jones had the women each take a turn dancing solo before dropping off the end of the stage. “Give this sister a hand!” she cried, determined that no one should leave the stage unheralded. Imbued with her courage, the women shook it hard, and soon Jones was dancing with some of them as they worked their way off stage. “You all give yourself a hand,” she yelled as the song ended.

As the crowd gave a standing ovation, Griptite shouted, “You have just experienced Ms. Sharon Jones!” It was an experience that, if you need a little funk, a little soul, a little courage in your life, is worth repeating. 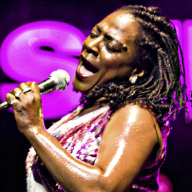 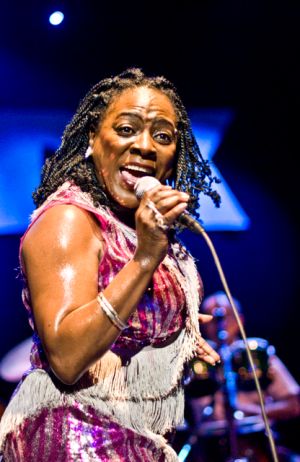 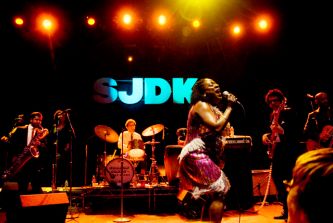