People go to concerts for all sorts of reasons. Friday night at the El Rey, the young lady standing directly in front of me, waving her hand like she was at a hip hop show and then preceding to dance, play air guitar, point back at the band, and occasionally shake her head in such a manner that sweat would leave her occupied territory and travel to mine, a concert was a release. Others, surely, were at the show to support a band that they enjoy, while some people were there out of obligation to a boyfriend or performer or music blog. Some people were probably there just to have fun. But, it’s doubtful that anyone, or at least very many people, was there to see the Shout Out Louds for catharsis. But by the end of the Swedish band’s 90 minute set, I couldn’t help feeling removed from all the failures and struggles, all the highs and lows, all the life that we barely endure through the work week. Seeing the Shout Out Louds made me feel healed. Judging from the happy faces and affirmations of enjoyment I witnessed while walking to my Corolla, the healing anthems of this Friday night were exactly what everyone needed, whether they came there looking for it or not.

I’ve mentioned this before, but it’s almost impossible to judge a band’s popularity anymore. Just because you read about a band everyday on the blogs or because a band gets high billing at Coachella, doesn’t mean they can get 1,000 people to see them in a major city. Just because the Shout Out Louds seemed to find across the board dislike from music critics when their most recent album, Work, was released at the beginning of the year, doesn’t mean they can’t play back to back nights, one of which has been sold out for months, and have the entire place singing along to every song from this “hated” album. This comforted me, because I like Work a lot. But, I have also kept my mouth shut about liking it, because I just assumed that this band somehow has penetrated my usually invincible wall of criticism and pretention. In fact, besides the aforementioned catharsis, this show also reestablished my interest in this band that I had lost active interest in, that I assumed had somehow ceased being relevant and I was too blinded by nostalgia to notice. 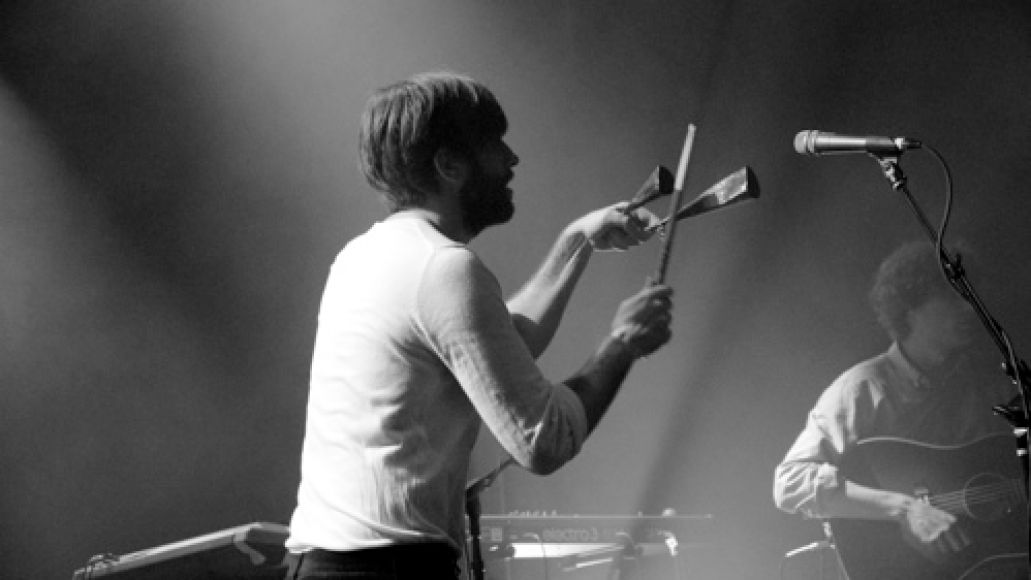 Well, no, the critics are wrong and these guys (and girl) rule. First of all, I guess I’d seen a picture of the band, but still I expected some skinny hipsters or something. But no, there was a general average feel to their looks (except stone-cold fox Bebben Stenborg) and they came across as earnest, sincere, and genuinely likable. There also weren’t a lot of tricks to their set to try to earn the crowds approval. They let their music do the talking and talk it did. From a set that included nearly the entire new album and handful of tunes from their two earlier albums, they proved that the teen anthem is something that is impossible to outgrow. “Please Please Please” and “The Comeback” seem like they were from another generation, yet they still sound as immediate as when they were released. “Impossible” and “You Are Dreaming” served as reminders of both the gentle stride that occurred with Our Ill Wills and what a fun album that was. And, new songs “Show Me Something New” and “Candle Burned Out” were at home with the older songs, never seeming like mandatory new material, but rather new standards that the band will be playing for a long time.

Shout Out Louds sounded flawless and paced the show expertly, never letting the slow songs slow them down, but not lumping the fast ones together so as they would become indiscernible. From what I have read, they play similar sets every night, so one would hope they had pace on lock down. If I were forced to find things to complain about (besides singer Adam Olenius’ lack of an accent) was the band sticking keyboardist Stenborg way in the back, though her shy and withdrawn demeanor may have to do with it. Though songs that included her vocals more predominately, like “Too Late, Too Slow”, showed a different side to the band and might be a richer sound for them to further explore. 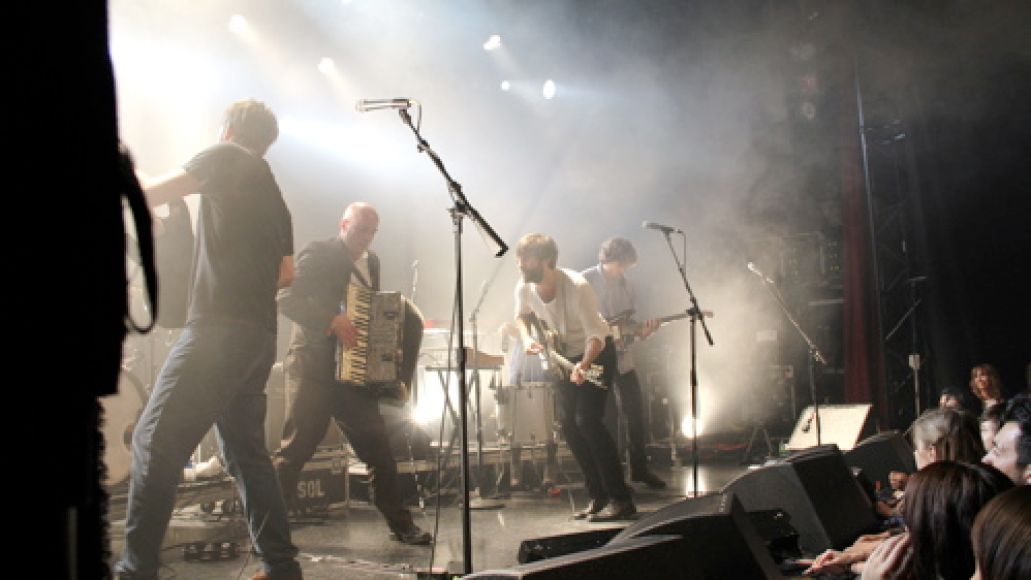 Though the entire set had no low points, the high points were particularly strong. “Tonight I’m Going To Leave It” saw Olenius playing cowbell and tambourine, and then hurl himself into the crowd, where the enthusiastic faithful helped him with the song’s finale. “Hard Rain” was a surprise on the setlist and showed the band reaching new heights through the ability to go from one singer to two. Having separate lead part for male and female is a can’t miss formula for a reason. They followed this with “Very Loud” and brought out James Fearnley from The Pogues to play accordion for the set-closer, which got the fans in a frenzy even though I guarantee half of them have no idea who The Pogues are. But even topping this was “Walls”, whose closing state “Whatever they say, we’re the ones building walls/Whatever they say, we’re the ones who never say no/To get to know yourself, you gotta runaway/Never trust anyone, so run away.” Hardly an uplifting message, but an empowering one. Taking matters into your own hands is about the best advice you can give anyone, and something everyone needs to hear (even this writer). And I guess that’s what felt so cathartic about the evening: the fact that you don’t need to feel good or be happy at a particular moment to still be in control.

Supporting Shout Out Louds both nights at the El Rey were Freelance Whales, the New York band I was less than enthusiastic about on-record. Like Shout Out Louds, I went into the concert wondering if I was wrong, as there was a significant amount of positive press and buzz about them. But no, I’m standing behind my opinions and everyone I talked to found the band generally unappealing, regardless what night they attended. Their sound is dated in the indie rock of five years ago, which it is too soon or too late to imitate. They obviously didn’t get the message that Animal Collective is the hot band to copy and the most forgivable one at this point. They are touring with Tokyo Police Club next, a bill that should be a celebration of mediocrity. 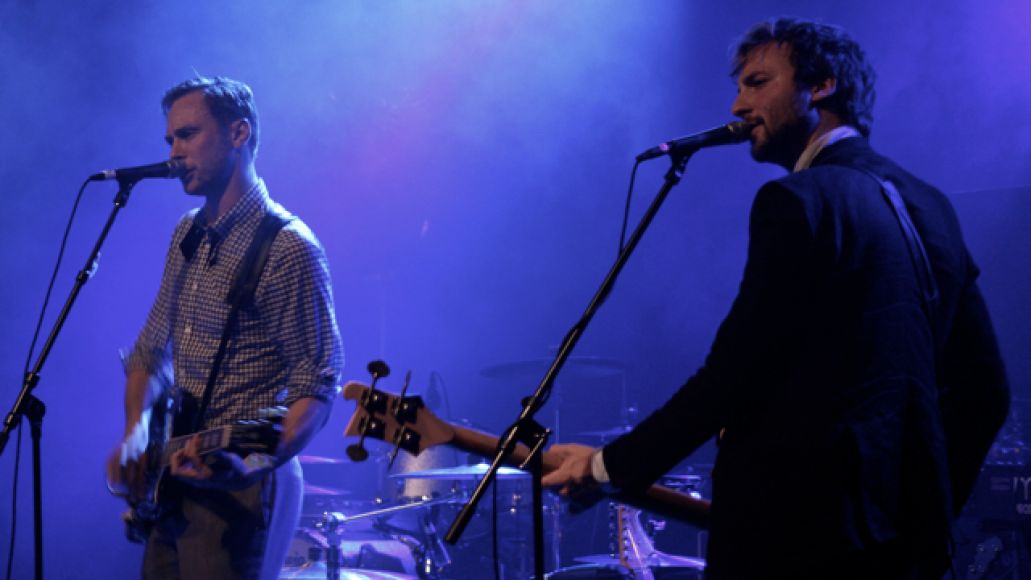 Thursday night featured The Franks, a local band that has I was actually really disappointed didn’t get on the Friday bill. They have received a considerable amount of buzz from people I know and seem to be establishing themselves, especially considering that Shout Out Louds brought them down the Pacific coast for many dates. Photographer Jesse Bloch also cited them as a highlight of Thursday evening, so I know I’ll be seeing them in the near future and reporting back.

One final note: CoS has now been to the El Rey a few times and think this might be the best venue in L.A. Seeing a sold-out show always brings a bit of weariness to a music writer, but even when sold-out, the El Rey is easy to move around in, easy to see at and has the best sound you can get. Throw in the fact that it is absolutely beautiful and you have a dude who actually doesn’t mind that he has to pay 10 bucks to park. That’s about the highest compliment I can give.

Encore:
Impossible
You Are Dreaming
Walls
——