Oh, grunge rock, I hardly knew thee. For I had been saddled with the late-’90s pejorative “post-grunge” — a term widely accepted among fans of alternative rock as a mere derivative of the early ’90s, not a legitimately artistic phenomenon.

To elaborate, during that decade’s former half, Seattle was busting at the seams with a musical movement far more chaotic than anything that generation had ever seen. Sub Pop Records became an epicenter for the spearheading grunge band Nirvana; elsewhere, a fallen band known as Mother Love Bone splintered off following the death of frontman Andrew Wood, thus culminating in a few remaining members seeking out new vocals (from Eddie Vedder) and forming Pearl Jam.

When grunge music came to a slow fade after Cobain’s death in 1995 and the dwindling tour successes of Pearl Jam toward ’96, we here in the time of Creed (again) and Puddle of Mudd pondered the possible pasts and futures of a different world originating via Generation X. A world apart from our own, where not only had Kurt Cobain lived a much longer and more fruitful existence, but perhaps Pearl Jam never existed. For better or worse? You decide.

I posit that everything to do with Nirvana’s iconic status revolves around timing. Am I touting that Nirvana was solely a lucky band? No, as I am an avid listener for many reasons. However, I do not sensationalize Cobain in the history of music because he is not a solitary practitioner. Nirvana was one large piece of a much larger tapestry in the early ’90s scenery. Gen-X is a rebel without a cause, a pseudo-intellectual twenty-something who combined punk rock and metal without the glitz of glam, or sexy hair, or ballads. 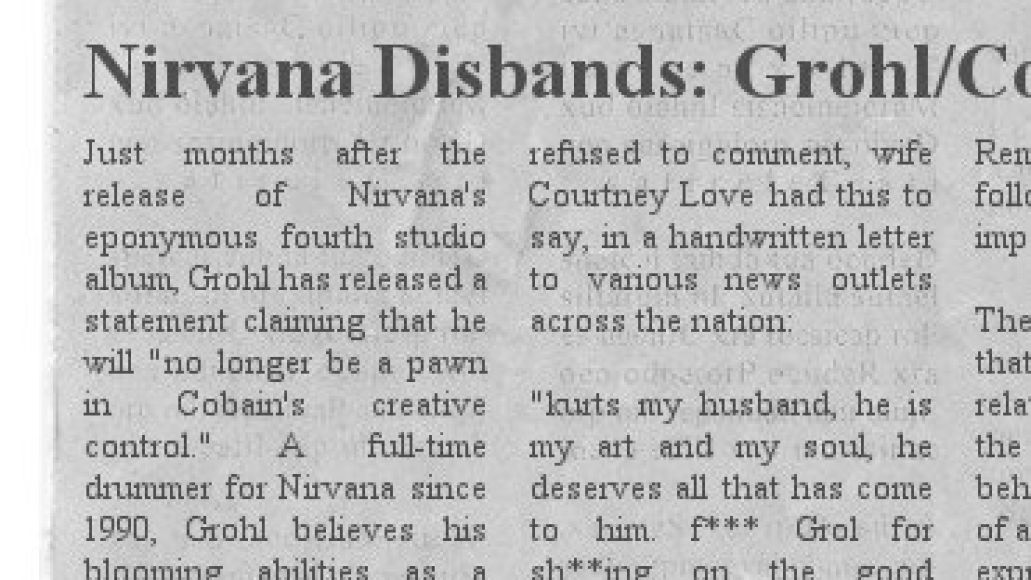 Sub Pop had many talented acts on the roster, but the public loves some Cobain. When he died, he helped take down the genre his band boosted because so much was weighed onto it, martyrdom-style. Grunge, much like shoegaze or Britpop, was going to happen whether he was in it or not; it was just fucking time, and its demand became its curse. In all fairness, had Cobain lived, the world might still be dealing with post-grunge, but all eyes would no longer be rose-tinted in the glare of Nirvana’s stardom. For example:

Imagine Nirvana now, regrouped with a freshly depressed Cobain, not ironically or popularly doped up and angst riddled, but purely lost and bored. Nirvana would tour incessantly with one of its original drummers, taking away the pulse that grunge and post-grunge still had. Meanwhile, Dave Grohl would still be Dave Grohl, only kind of a douchebag and more pop oriented, given his extended stay in Nirvana and the pressure by labels to be more successful than his previous band.

Courtney Love? Pulling her husband’s strings to protect him from big, bad Grohl and his ilk, while building herself up as the next (illiterate) Sharon Osbourne. Comforting thoughts, right? Does this mean Cobain’s death was a necessary tragedy? No, and I do mourn his loss like anyone else (though I don’t make any annual pilgrimages to Aberdeen, Washington), but think of the horrifying “what ifs” involved had Nirvana gone on … with or without Cobain. Exactly. And you thought grunge was dead now.

It’s not terribly shocking that Wood’s death has been relatively unnoticed in the world since he was lost, especially given the popularity of two of Mother Love Bone’s founding members post-MLB. Pearl Jam is a driving influence in alt rock even now, though the EdVed imitations have been a downward spiral also attributed to this trend. On Wood, however, rests the reputation that his vocal stylings and the band he fronted had a lot of classic rock inspiration embedded in it from the likes of Led Zeppelin to Queensryche, and so on.

We come, yet again, to a natural progression of genres. If Wood had lived, perhaps, Mother Love Bone would have stuck around to receive more and more praise over the years. It might have gone the experimental route in the late ’90s, yet still retained its signature sound. In this alternate history, Nirvana has become a mutated version of itself, and Pearl Jam never existed. Does Eddie Vedder’s original outfit Bad Radio make an appearance on the scene, only to fade into obscurity? Does Mother Love Bone, now becoming a nationwide phenomenon, become the band that incites a return to classic and garage rock? With Stone Gossard leading the charge, where does guitar take us? If Mother Love Bone had continued on, we would never have seen the Ticketmaster feuds and maybe that would have been a moot point altogether. Temple of the Dog would never exist, and the Pearl Jam show I witnessed the other day may have been an MLB concert performance instead.

We would again be where we are now, somewhat, but via a different route taken. Would you rather follow Vedder or Wood around on tour? Would Wood have been the type to break into solo acoustic soundtrack gigs, or would he have been like a more vocally talented Josh Homme, while succeeding as a catalyst for Led Zeppelin’s currently unlikely reunion? As an alternate history, you decide for yourself.

1997: Nirvana is released; group disbands due to intensifying conflicts between Grohl and Cobain for songwriting credit. Nirvana holds auditions for new drummer and tours to promote the new album.

In other news: There is no fucking Creed. Happy?